247 Linden Street: Story of a building

In 1882, an architect by the name of William Quayle, of Denver, was hired to build a commercial block (A “block” is what they called a single building back in the day.) along Linden Street in the heart of a new frontier town called Fort Collins. A train line had just been built on the west side of town five years previous, bringing with it eager settlers from the east, and the town was booming. Businesses were growing and early shop keepers were replacing their wooden structures with sturdy (and slightly more ostentatious and permanent) brick. Such was the case for 411 Linden Street (the building to the far left in the photo above).

According to Evadene Swanson, Quayle “received many commissions from Fort Collins leaders…. He is ranked today as a conservative architect and less esteemed than his more creative contemporaries, but he satisfied the Fort Collins taste of the period.” Quayle also designed the Franklin School in 1887 (where Steele’s Grocery once stood and where a parking lot is today) and the County Courthouse (where the the county building between Oak and Mountain stands today).

The uses in the buildings changed over time, as shown by the notations made in the Sanborn maps from the era. Sanborn maps were created by an insurance company to measure the fire risk of a building. But they’ve become a wonderful historical reference point. The following clippings from old Sanborn maps of Fort Collins show the same section of Linden Street over time. It’s the northwest section of the street, where Centennial Gallery, the Art Lab, Cozzoloa’s Pizza, Old Town Distilling Co, Cafe Ardour, and others stand today. 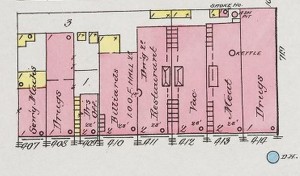 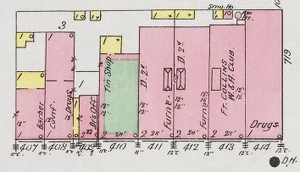 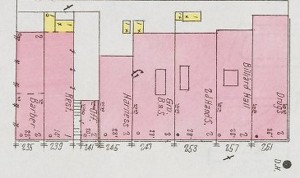 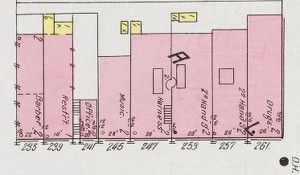 When the address numbering changed, 411 Linden Street became 247 Linden. The building stood vacant in the late 1920s and early 1930s. But by 1938, it housed Hawley’s Auto Top Shop. That was likely the beginning of its use as an automobile shop and probably marks the time period when the building was first converted from being a storefront to having a garage door front that enabled cars to be driven inside.

But probably the most significant moment in the life of this building at 247 Linden Street, besides the day it was built, was when a guy by the name of Joe Cienfuegos (known as Chancio by his friends and family) bought the building in 1945 and opened up Joe’s Upholstery Shop. Seventy years later, though Joe is gone and the business has passed down to his son, Richard, Joe’s Upholstery Shop still stands, a stalwart figure in the Linden Street lineup. 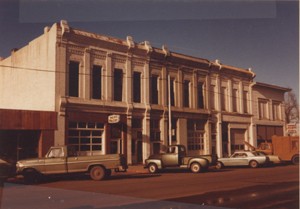 Joe’s Upholstery Shop in 1979, when the building joined the National Historic Register as a member of the Old Town Historic District. (Photo from the FC Archive – H25112.)

Richard is about the age Joe was when he retired from working as an upholsterer. And with the way Old Town has taken off, taxes have more than doubled just since the year 2000. Though Joe’s Upholstery shop is still open, the ownership of the building has recently changed hands, which might signal an eventual end to this charming shop in the center of town. 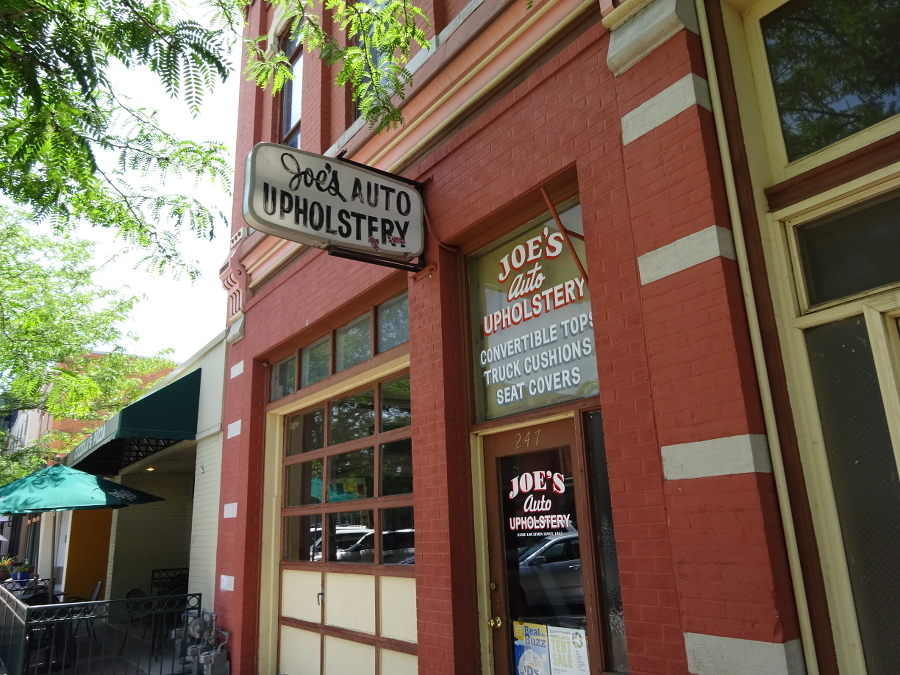 Sanborn maps can be viewed online through the University of Colorado in Boulder’s website.

All information on uses outside of what I found in the Sanborn maps came from old city/county directories which can also be accessed online through the Fort Collins Archive.