An Overview of the
Ku Klux Klan in Colorado

The Ku Klux Klan has exerted its influence in the United States during three distinct periods of time since its inception in 1865:

What many Coloradans today might not realize is that during that second wave, in the 1920s, the state of Colorado had the second largest membership roles of any other state in the U. S. A. (Indiana had the largest.)

In a several part series, I hope to explore how and why the Klan rose to power in Colorado in the 1920s, I am particularly interested in the people that took part in the movement and the places where Klan activity took place. But first, in this article, I give a brief history and overview of the various “movements” of the Klan at both a national and state level in order to set the story of the Colorado Klan in the 1920s within a chronological context. 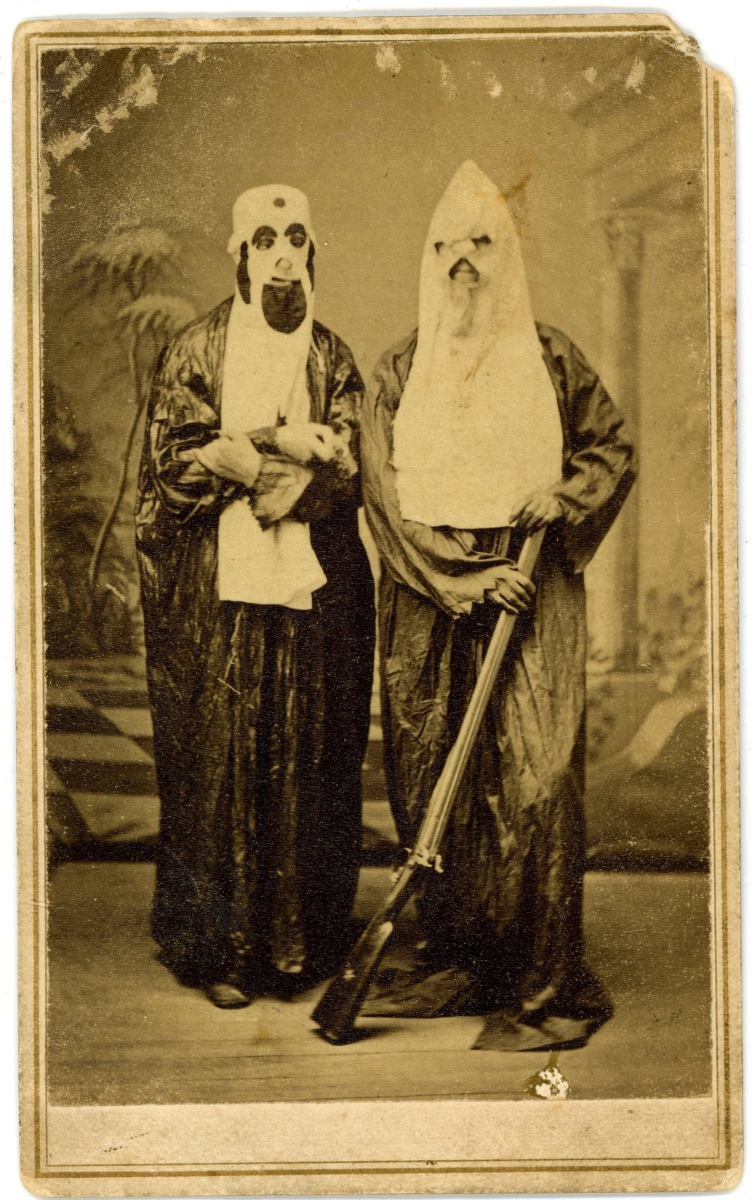 Image via a Guardian.com gallery of Race War images. There it is subtitled as follows, “A carte de visite of anonymous men in Ku Klux Klan uniforms, 1868, by Robinson and Murphy (Huntsville, Alabama). Collection: Greg French”

On Christmas Eve in 1865, a group of Tennessee Civil War veterans created a social fraternity for Confederate vets. They named it the Ku Klux Klan after the Greek word for circle – “kuklos.” “Klan” was probably added for alliteration, though it might also refer to the heritage of Scottish Protestants who likely were members of the group. Whether or not violence was a part of the original mandate, it quickly came to the fore as the organization grew.

Made up largely of Democrats, the group was bitter about the Republican emancipation of slaves under President Lincoln. They sought a means of reclaiming control and thwarting Radical Republican Reconstruction policies. The Klan used a pre-Civil War “policing” tool called “slave patrols” in which small bands of men on horses would use intimidation and violence in order to “regulate the Colored population.” The men donned white robes in order to look like ghosts — both emphasizing the secretive nature of the organization as well as playing upon the fears of superstitious former slaves.

Calling themselves “The Invisible Empire of the South,” the members believed that they were helping to preserve law and order in a country run amuck thanks to the machinations of the Republican North (and the carpetbaggers and scalawags that took advantage of the opportunity to make money off of the situation). When intimidation with flaming crosses or physical assault wasn’t enough to cow those thought to be problematic, murder (often in the form of lynching) was employed. It is thought that thousands of Blacks, as well as a lesser number of White Republicans, were murdered during this time.

In 1871, Congress passed the Third Force Act, also known as the Ku Klux Klan Act, which authorized the president to declare martial law, impose heavy penalties against terrorist organizations, and use military force to suppress the Klan. The Klan appeared to die out around that time anyway as a recession hit the country and the Republicans began to focus on the economy rather than Reconstruction.

The Klan during this time was located in the southeastern part of the country, primarily in former slave states. It therefore didn’t directly affect Colorado, though stories of Klan activity, and congressional responses, did appear in newspapers throughout the state.

Image from an NPR story entitled, “When The KKK Was Mainstream.” The photo is from a march held on Aug. 9, 1925. (from the Bettmann/Corbis collection)

Upon returning from the Spanish-American War (which ended in 1898), a man by the name of William Joseph Simmons had a vision. As he looked up, he saw in the clouds robed klansmen astride horses. He fell to his knees and promised God that he would resurrect the dormant organization. It wasn’t until 1915, however, that he approached fifteen men and, before an American flag and a burning cross at the summit of Stone Mountain in Georgia, they dedicated themselves to reviving the Ku Klux Klan.

The organization grew slowly until 1920, when the Klan signed a deal with a publicity company to help build membership. At that point it spread like wildfire across the nation with some of the largest memberships located in Indiana, Colorado, and Oregon. Americanism as well as law and order continued to be pertinent themes. White robes were still worn and crosses were still burned. But the level of physical violence was lower than what had taken place in the first wave of the Klan. Instead, there was a pointed attempt to insert as many klansmen into politics as possible. For this purpose, the Klan ran candidates in both the Republican and Democratic parties, though more often than not it was through the Republican party that the organization had its greatest influence.

In Colorado, the Klan promised to clean up the streets — removing bootleggers, prostitutes and Catholics in particular. Rather than employing violence, economic boycotts were more the order of the day, though some states definitely still had their share of physical conflict (especially in the South, although California and Texas had some issues as well).

In 1923, Benjamin F. Stapleton was elected as mayor of Denver with the help of the Klan. (Yes, the same Stapleton for whom the old airport was named.) In 1924, Rice Means became a United States Senator with backing from the Colorado Klan. Throughout the state Klan members were elected to positions of power as well as to Boards of Education and other positions.

The Klan began to lose its hold over the state in 1926. And with the coming of the Great Depression, many members lost interest and dropped out as they struggled with other issues. 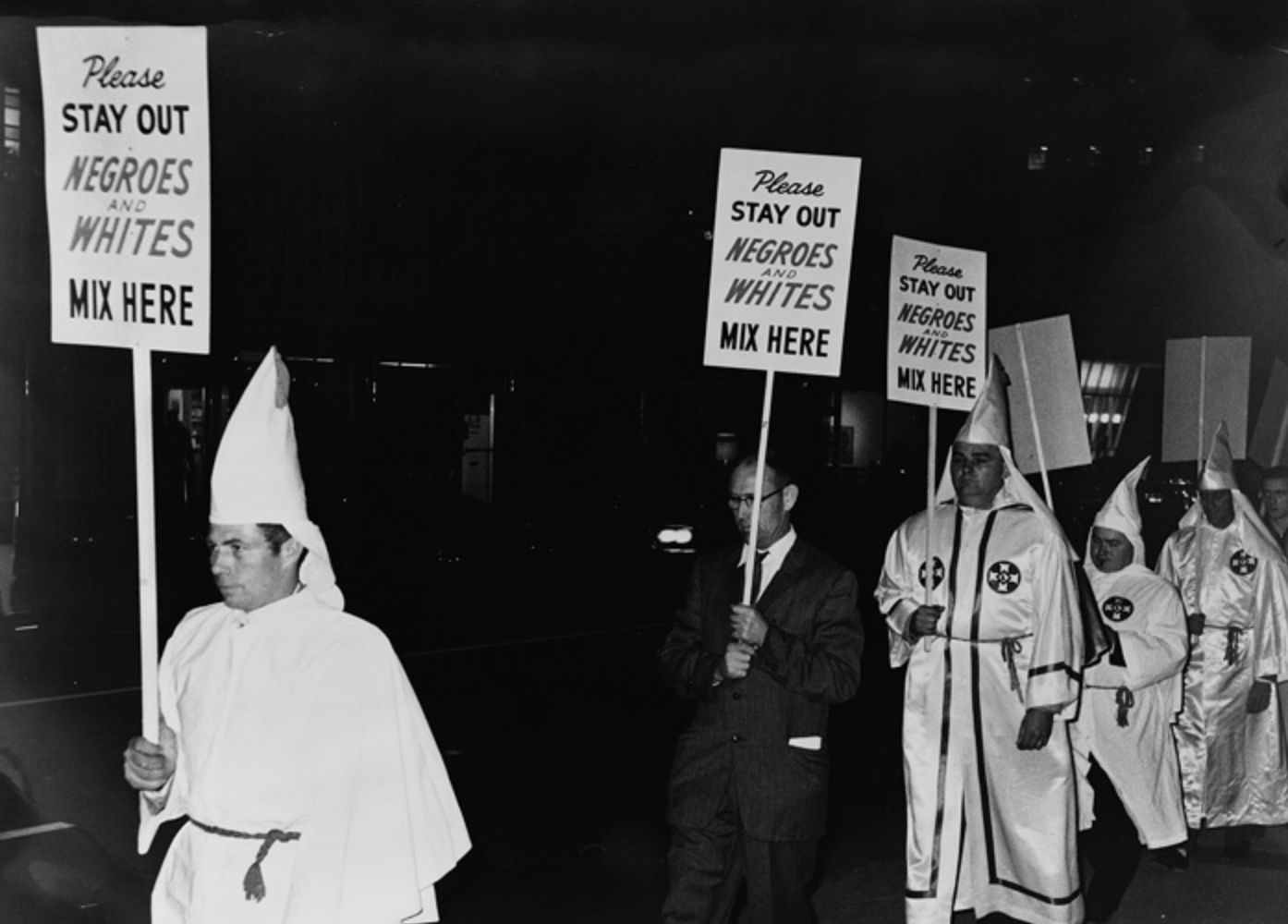 Despite a loss in membership, the Ku Klux Klan didn’t die out in the 1930s, though it did greatly diminish in size. It rose up again in the 1950s and 60s as a result of desegregation, but with no where near the membership levels of the 20s — tens of thousands as compared to the millions from the previous wave. But what it lacked in membership, it made up for in violence — especially in the South. And this time Klan activities were broadcast nationally not only through newspapers, but through radio and television as well, bringing Southern violence into homes throughout the country.

The bombing of the 16th Street Baptist Church, in which four girls were killed and at least twenty injured in the explosion, led many who had formerly payed the Civil Rights movement no mind, to suddenly sit up and take notice. Anti-Klan sentiment gained strength and the organization went back underground.

The movie “BlacKkKlansman,” currently in theaters, recounts the story of Ron Stallworth, the first Black officer in the Colorado Springs police force, who with the help of a White coworker, infiltrated the Klan. Read more about his story in this Washington Post article. (He wasn’t the first Black man to infiltrate the KKK in Colorado, however. More on that in a future article.)

The Klan has continued since the time of the Civil Rights Movement, though it has splintered into a variety of organizations, all of whom claim to be the true descendants of the Klan from the 1920s.

In some sense, groups like the Ku Klux Klan are the result of significant cultural change met with extreme resistance from those who feel they are most at risk of losing out as a result of that change. While other parts of the United States experienced intense physical violence against Blacks, Jews, Catholics and Republicans (depending on the era), in Colorado physical violence was often downgraded to written threats. Instead, political and economic tactics have been the combative tools of choice for those fighting to retain their power in Colorado. Boycotts of stores owned by Catholic shopkeepers and employers refusing to hire non-Klan-members were two tools used frequently throughout the state.

The Klan is a part of our local and state history. Differences between Colorado and Southern states have given it a different flavor than what might most commonly be associated with the Klan, but that  makes it no less relevant.

In future articles I will cover the influence of the Klan in Colorado during the 1920s in greater depth. I will delve into the How and Why of the Klan in our state. I will look more closely at Klan affiliations and events that took place in northern Colorado. And I’ll explore the interesting intersection of Women’s Rights and the Klan, especially as it arose in the Longmont area.

If you have a personal story (whether it’s your own or one handed down through family lines) of the Klan in Colorado, I’d love to hear it. A former youth-group compatriot shared a story from her family with me. Her grandmother was 15 during the time of the Klan’s greatest power in Colorado. She was married secretly in a KKK ceremony. When her mother (my friend’s great-grandmother) found out, she tried to get the married annulled, but none of the elected officials, judges, or police were willing to help. They were either part of the KKK and had attended the ceremony or they were not members, but were not willing to go against the Klan. If you have a story, you can share it here in the comments, on Facebook, or email me at meg@northerncoloradohistory.com.

On the post-Reconstruction KKK section I referred the following articles:

On the post-World War I KKK section I relied largely upon what I had learned in reading Robert Alan Goldberg’s book, Hooded Empire: The ku Klux Klan in Colorado (which I know is available through the Poudre Library system and may be available in other northern Colorado communities as well).

For the Civil Rights section, I relied primarily on Wikipedia.

The photo at the very top of this article is of a Klan rally in Colorado. The image is from the Denver Public Library Digital Collection, call number Z-188.