A Study in Archives and Outhouses

I probably receive at least a request a week for information. Sometimes people want to know more about a topic that I’ve written an article on. Other times they’re asking if I know anything about a specific place or person or event. And I occasionally get requests for tips or suggestions on how someone can go about doing local history research of their own. I’ve gotten a triple portion of such emails over the past weekend and almost every single time I either direct people to the City Archive (among other resources), or I end up on the City Archive website myself doing some quick background research before writing back to them. It was during one of these searches on Monday that I discovered a series of photos on the Archive website that are part of a collection entitled, “A Study in Outhouses.” 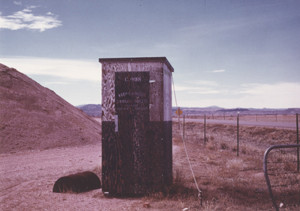 There at least eight photos with the title “A Study in Outhouses,” all taken by Ralph Giddings, all undated, and all with the same captioning on the Archive’s site. All of the images are also rather small, so it’s a little hard to make out some details. (That almost looks like aluminum foil wrapped around the upper half of the outhouse shown above, although it’s probably some sort of metal sheeting.) 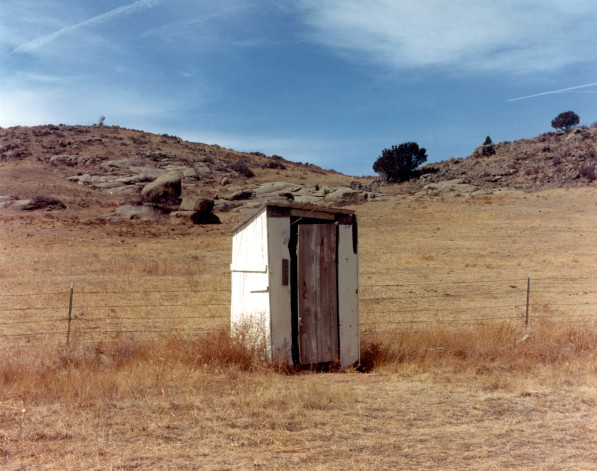 “Color photograph of a small white, wooden outhouse near US 287, just north of Laporte. This photograph was taken by Faye Giddings in 1978.” – Fort Collins Archive ( H11495)

My original search on the Archive site had been for a house that was once owned by the Giddings family up near where the Budweiser plant is today. But it’s nearly impossible to do a search on that website without getting sidetracked by some other interesting little tidbit. This time it was outhouses. 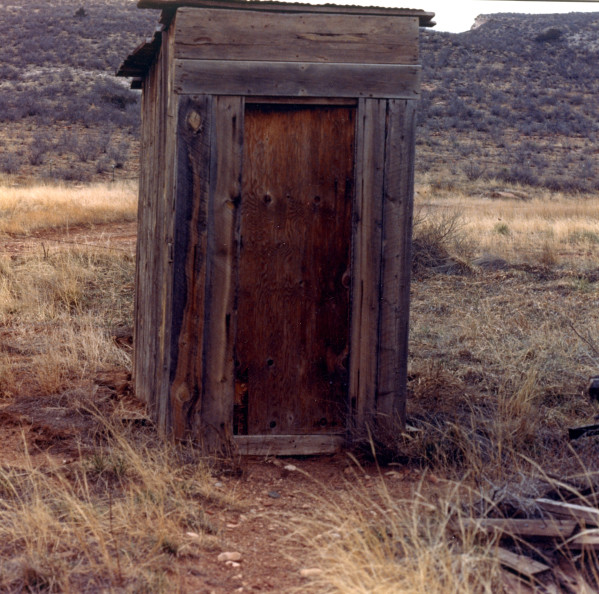 “Color photograph of an outhouse near US 287 between Laporte and Virginia Dale, probably near Owl Canyon. Faye Giddings took this photo in 1978.” – Fort Collins Archive (H11496)

The photos that Ralph had turned in to the City Archive were all scanned at a small resolution, a legacy of the time when server space was limited and photos were kept small in order to include more of them on the website. Ralph’s wife, Faye, also had a collection of outhouse photographs, but hers were scanned at a higher resolution, which makes it a little easier to make out details in her photos.

The image above appeared in both Ralph and Faye’s collections. It’s possible that a few of Ralph’s photos got turned in to the Archive at two different times and were attributed to Faye the second time around. Or perhaps all of the photos originally attributed to Ralph were Faye’s to begin with.

Unfortunately the details captured with older submissions to the Archive aren’t always completely factual. By the time items get turned in they’ve often been passed down to children or grandchildren who may be fuzzy on the facts. Or perhaps the person giving the information is of an age where their memory is slightly foggy. 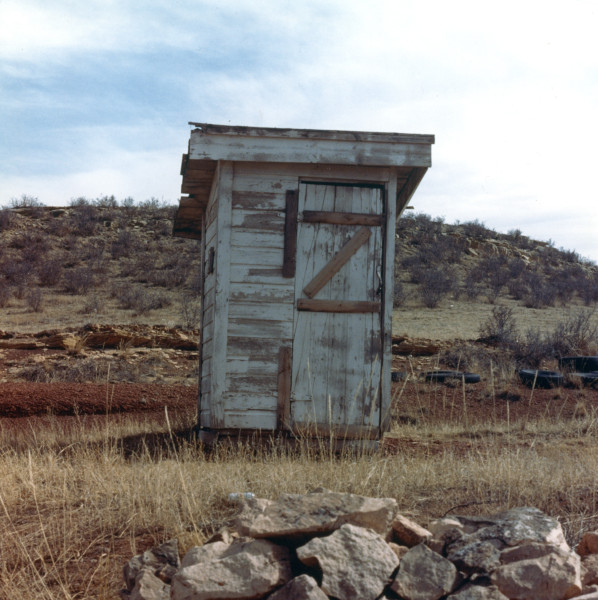 ” Color photograph of an outhouse near US 287 between Laporte and Virginia Dale, probably near Owl Canyon. Faye Giddings took this photo in 1978.” – Fort Collins Archive (H11497) 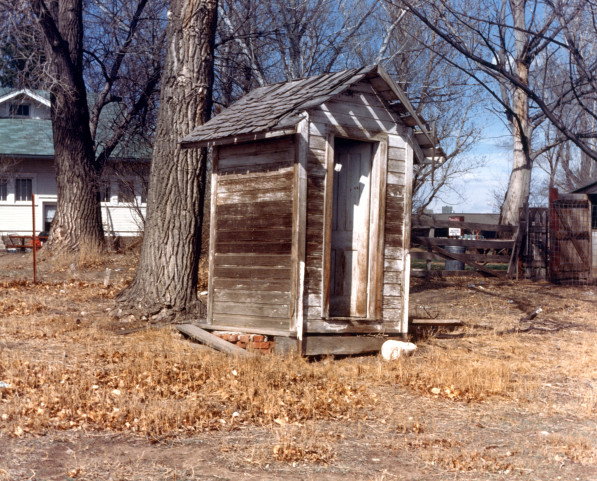 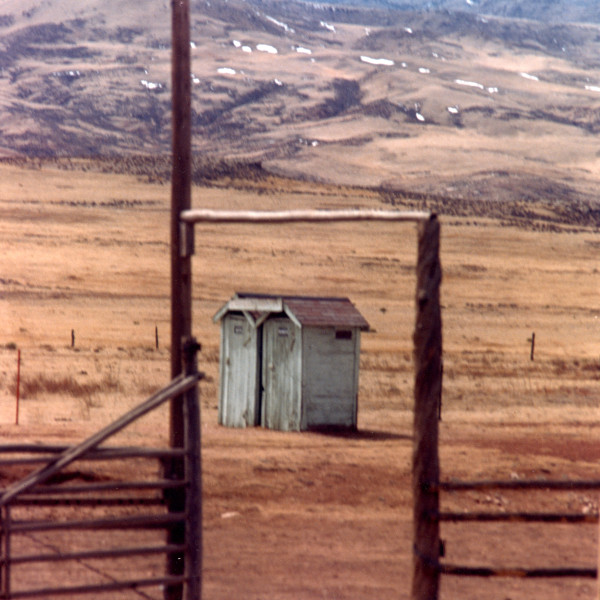 “Color photograph of a double privy on the Livermore Rodeo grounds. This photo was taken from a 35 mm slid. Faye Giddings took this photograph in 1978.” – Fort Collins Archive (H11493) 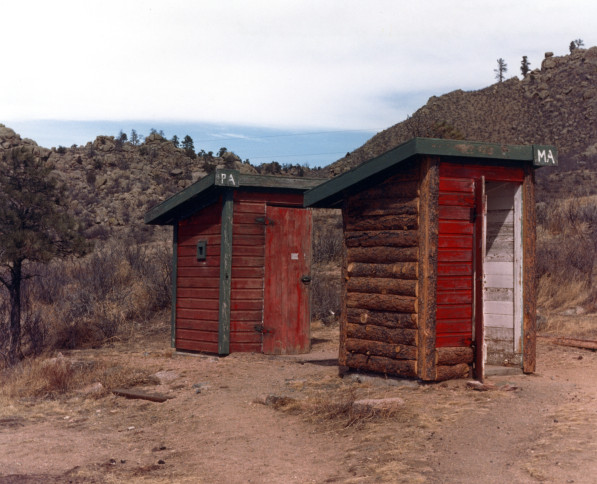 “Color photograph of two outhouses, one labeled “Pa” and the other labeled “Ma.” These buildings are located at Virginia Dale.” – Fort Collins Archive (H11498) 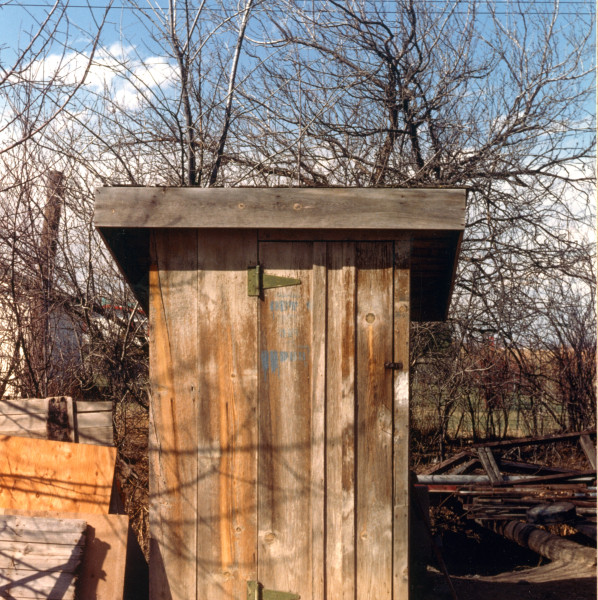 “Color photograph of an outhouse located behind the Harmony Store on the corner of Harmony Road and Timberline Road. Faye Giddings took this photograph in 1978.” – Fort Collins Archive (H11494)

If I’m not mistaken, Fort Collins not only used to have a second story outhouse downtown, but there is at least one fully flushing outhouse (connected to the sewer lines) in town, although I don’t think it’s still in use.

Do you know of any old outhouses in Larimer County that are still around? Do you have any good outhouse stories or jokes? I’d love to hear all about it in the comments.

The “City Archive,” the “Fort Collins Archive” and “The Archive at the Fort Collins Museum of Discovery” all refer to the same organization. And online, you’ll find Archive photos on the site entitled “Fort Collins History Connection” as well as on the site called “Larimer County Water Ways.”

The photo of the outhouse from the main page of the Forgotten Fort Collins website was taken by me. The outhouse used to be located at the north end of Wood street before the area was scraped to be readied for a new housing development. The photo is probably from around 2014 or 2015.