The Blizzard of 1949, the Earliest Peoples in NoCo, and a Shoutout to our Sponsors

One of the most horrible blizzards on the western plains rolled in on January 2, 1949. Temperatures had climbed into the 70s on New Years Day in some areas. But the very next day it took only a matter of hours for temps to fall from the mid 30s at midday to below freezing by nightfall as a wall of snow and ice rolled across the land.

People driving home after spending the holidays with relatives were trapped in their cars, some buried under 10 foot drifts of snow. Others rushed to get their livestock to safety and struggled with only a few feet of visibility in the whiteout conditions and ice so thick that it froze the animals eyes shut, making it even harder to guide them to safety. 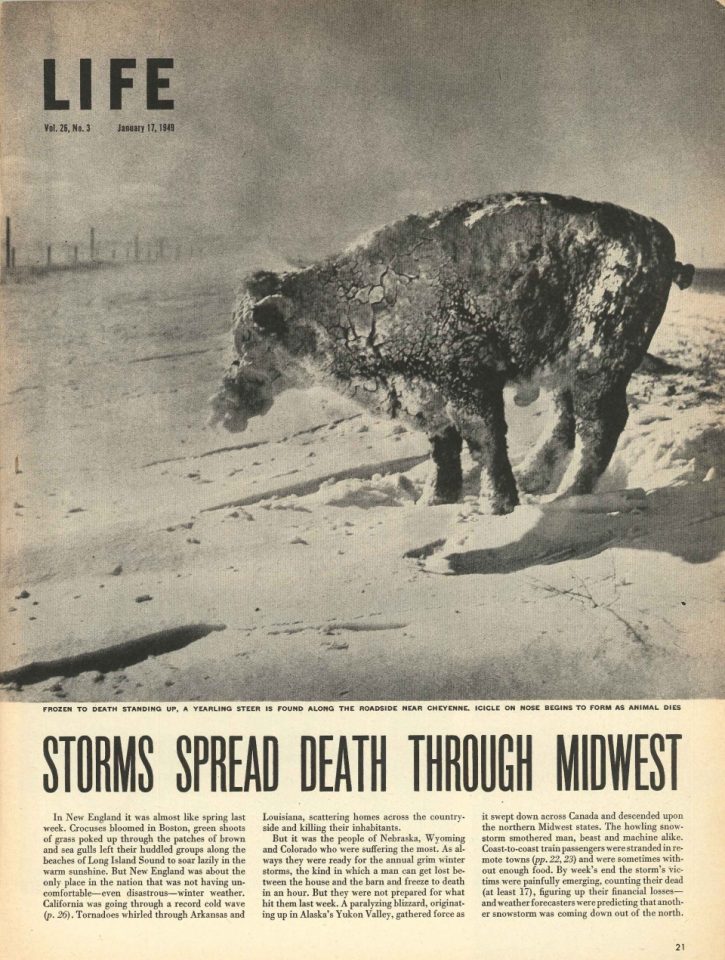 This is a page from the January 17, 1949 edition of Life Magazine (as found on from the website of the Historic Wheat Growers Hotel in Kimball, Nebraska).

Some terrified travelers remained in their cars, praying for rescue. Al Glassburn and his family were discovered by ranch hands from the Warren Livestock Ranch after 70 hours trapped in their vehicle. Other travelers abandoned their cars and headed for the nearest ranch house. Phillip and Ione Roman decided to brave the weather and walk home after their car stalled on the road. Together with their children, Tony, 10, and Peggy, 8, they trudged through the drifts. They were later found frozen to death, never having made it to safety.

By January 5th, the sun came back out but the winds continued. In fact, for the next two months snow and cold continued to make search and rescue efforts difficult, and impassible roads and and railroads meant that in some areas, food, medicine and even hay were airlifted in thanks to the US Air Force. When all was said and done, the official death toll for all the effected states was seventy six people dead (though some unofficial accountings claim the toll was even higher). At least seven of those deaths were in Colorado. And many of those who survived suffered permanent frostbite damage. 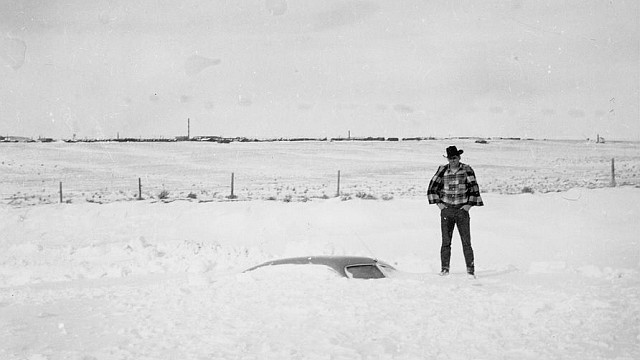 Car buried in snow during the blizzard of January 2-5, 1949. Photo from Wyoming PBS.

About four feet of snow fell during the blizzard, but the wind piled some drifts as high as 30 feet. Stories of cars, trains, livestock, even houses and barns buried under several feet of snow were common. The last of the snowdrifts are reported to have finally melted by July of that year. 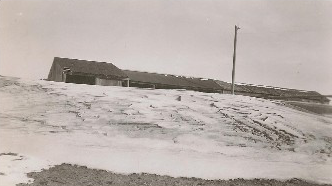 The horse and barn complex behind a mound of snow at the Bee Family Farm near Wellington. (Photo courtesy of Liz Harrison.)

The Bee family near Wellington was affected by the storm. According to Liz Harrison, her dad (Francis Bee) and grandpa (Arleigh Bee) had to walk a half mile from the 1942 house on the highway to the 1894 house where their corrals full of animals were. The photograph shown above gives a sense of the snow drifts they had to contend with in order to care for their animals.

You can learn more about the 1942 house, the 1894 house, the Bee family, and the trials and tribulations that they stalwartly dealt with because that’s just what you have to do when you run a farm, by visiting the Bee Family Centennial Farm Museum when it opens again in May. Not only that, but your tour guide may very well be one of the members of the family. You really can’t get any more connected to history than that!

The Bee Family Centennial Farm is one of the sponsors here on Forgotten Fort Collins. Another is the Fort Collins Historical Society, which will be hosting a talk next week, January 10th, on the earliest inhabitants of the northern Colorado region.

If you’ve ever wondered about the Folsom people, the Lindenmeier archeological site up at Soapstone, or the Plains Indians, this would be a great talk to attend to find out more. Jason LaBelle, a professor from CSU, will be giving a presentation on those who have lived here before us in the Poudre River valley and the area to the north.

All Fort Collins Historical Society talks are free and open to the public. Meetings begin at 7pm and take place at the Masonic Temple at 225 W. Oak Street. In addition to street parking, you can also park behind the building and come in the back door. (There’s a small set of steps that lead up to the door.) Or enter through the lowest doorway, just off the Howes sidewalk at the front of the building. From there take the stairs or elevator to the main floor.

Sources for the story on the Blizzard of 1949

“The Notorious Blizzard of 1949“, by Rebecca Hein on WyoHistory.org.

“Blizzard of 1949,” from the website of the Historic Wheat Growers Hotel in Kimball, Nebraska.