The introduction of the automobile significantly changed the way we build our cities and operate our businesses. Once this faster form of travel became available to the general public (thank you Henry Ford), communities could start to spread out in ways that were previously unthinkable. And shoppers were able to buy in larger quantities from stores further away from home because items that previously had to be carried on foot or in a horse drawn wagon could now be thrown in the trunk of a car. In a matter of just a few decades, city planners shifted from building walkable, dense cities to building drivable, sprawling ones. It has only been in the past few decades that the negative effects of this type of growth have started to reveal themselves. And recent studies are starting to better evaluate what’s gone wrong and how we can remedy the situation in order to strengthen economies, improve community connectedness, and grow sustainably.

It was the introduction of the car that enabled big box stores to develop and grow. There’s a reason Sam’s Club, Costco, Target and K-mart are surrounded by a sea of parking. With stores so far away from housing, it no longer made sense to drop in every day for items. Instead, we now tend to shop less frequently, but we buy more with each visit (at least on average).

Think about what this means in terms of employment. If consumers are dropping by the store once a week rather than 5 or 6 times as before, you suddenly need fewer clerks to ring up sales. (And since several small shops have been consolidated into one large one, there’s improved efficiency in that regard as well, thereby requiring less labor.) According to the Institute for Local Self Reliance, for every $10 million in sales, independent retailers average 57 employees. If you combine all brick & mortar stores — independent and chains — then for every $10 million in sales, 47 people are employed. (I was unable to find a figure for chain stores on their own.) In comparison, Amazon employs only 14 people per $10 million in sales. (source: ILSR)

This is important to keep in mind if a situation arises in which a retailer says they’d like to move to the area, but only if there are financial incentives in the form of tax credits or fee waivers. In that case, the community should consider the effect the new store will have upon the parallel retail businesses in the area. The company may say that they’ll be bringing in X number of new jobs to the region, but how many employees from their competitors will lose their jobs if those stores go under? And how do the pay rates compare between the newly employed and the those that have lost work? And lest that big box store simply decide to locate in Windsor instead, we should be making these sorts of considerations regionally. It may be a coup for Windsor over Fort Collins to gain the store, but is it really a win if, in the end, both Fort Collins and Windsor end up losing jobs as parallel retail stores close in both communities and if both municipalities end up losing money as it gets sent to corporate headquarters in some other state? 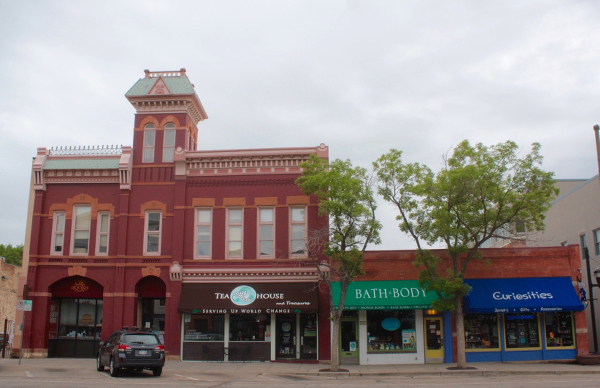 Local businesses have been able to thrive in Old Town Fort Collins, but high rents are making it harder to remain in place. Building ownership helps to create stability.

There’s value in having a diversity of business types, sizes, and ownership in a community. If you want to grab a cup of coffee, but there’s only chain stores to choose from (Let’s imagine there’s only Starbucks… and in some communities that is all that’s available.), then the prices and product offerings from store to store are going to be identical. And if something happens to that national chain and the company doesn’t make it, then the city has lost all of those coffee shops at once. But if there are multiple coffee shops in a region, all owned independently of each other, with a variety of price points and product offerings, then the community has greater choice and a wider range of people are able to access the service or product. And should one of those coffee shops go under, there’s still several more to choose from. So diversity adds not only a greater level of choice for the consumer, but it also reduces economic volatility. 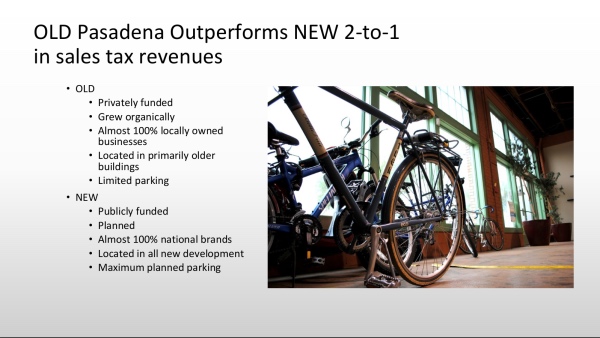 This slide is from Kimber Lanning’s talk entitled, “Local Economies and Livable Places: The Case for Preservation.” February 4, 2016.

Studies have shown that older parts of town often outperform the sprawling newer developments. I don’t think this is just because these older parts of town have cool or funky old buildings, although that does play into it. (Read more about that in an upcoming article on the benefits of historic preservation for local economies.) But older commercial districts also tend to be more walkable, which leads to window shopping. They tend to be made up of smaller buildings, which tend to house a variety of businesses rather than the larger buildings you tend to find in newer developments that support only one business or perhaps only two or three. And because these smaller buildings are holding smaller businesses, they’re far more likely to be housing diverse locally owned companies, providing for a richer shopping experience, or a greater variety of services, than the larger stores, which are mostly likely big chains.

Here’s a study that I found to be particularly interesting. It compared the revenue and expenditures of two locally owned bookstores in Austin, Texas compared to a Borders bookstore that was being proposed to go into an adjacent building as well as receive some hefty government subsidies. The report, entitled Economic Impact Analysis: A Case Study: Local Merchants vs. Chain Retailers, made three key findings:

Researchers found that for every $100 spend at Borders there was only a $13 impact on the city. On the other hand, $100 spent at either of the locally owned shops led to $45 being put back into the local economy. Borders was employing accountants, lawyers, HR staff, marketing staff and others who lived in Ann Arbor. So those Austin dollars were supporting Ann Arbor’s economy. On the other hand, the locally owned booksellers were reinvesting their income into local accountants, media firms, etc.

Of course, what I appreciate most about this study is that it references Borders, which has since gone bankrupt. This only goes to show that bigger isn’t always better. And the bigger they are, the harder they fall (unless the government comes along to prop them up).

I went to college in Ann Arbor. I used to shop at Borders back when it was a little store in a funky old building with tables of bargain books along the sidewalk out front. It was a charming shop about a block from campus and it provided a cozy place to stop and take a break on my way home from class. It was a small, locally owned bookstore. … And then it grew. It moved out of that cute little space and into a new building down the street. It immediately lost all of its charm. It was no longer comfortable and cozy in the way it had been. It became large, airy, and… corporate. And now that it’s gone, just think of all the communities that allowed their own cute little local bookstores to be driven out by Borders, only to end up with a large vacant building when Borders finally folded. It was a double whammy. 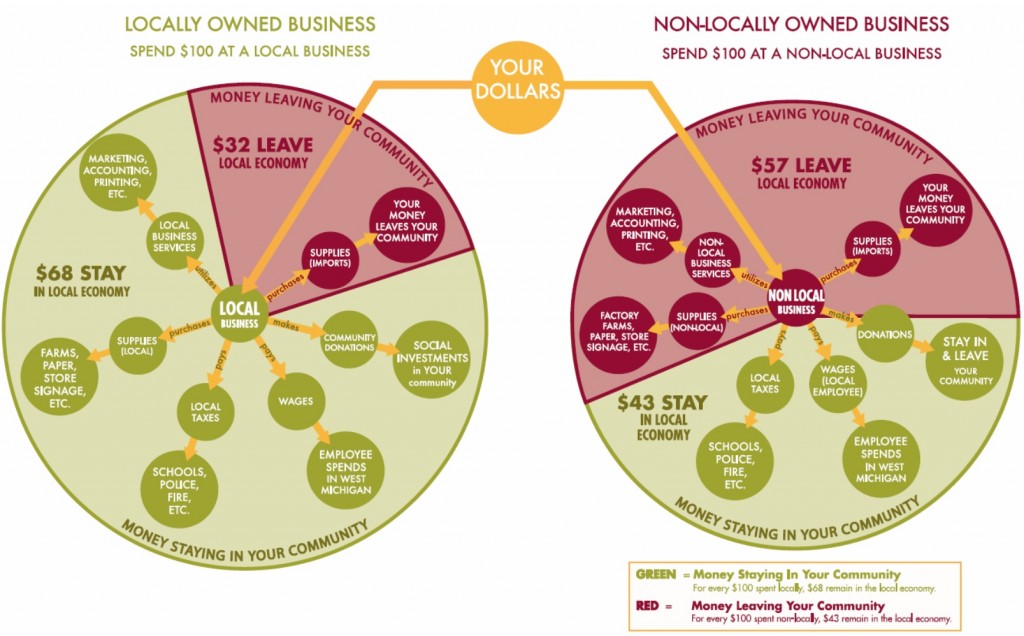 This image is from “Local Works! Examining the Impact of Local Business on the West Michigan Economy,” by Local First and Civic Economics.

This issue of local businesses doesn’t just include retail. When local owners and builders come to the city for design review, they already have a sense of the values of the community in terms of how a building should fit in with the surrounding block. They’re more familiar with the code and process and often more willing to make changes to their design that are better for the community. On the other hand, outside owners or developers may bring a project to Fort Collins, but they have little or no personal connection to the community, so they’re not trying to build something that’s going to be an asset for many years to come. They’re just trying to turn a profit. They are unfamiliar with the building code and don’t realize that there’s an extensive review process that comes with it that has specifically been put in place by city council to help make sure new development is in keeping with who we are as a community. And these outside owners and developers often have a lawyer on hand, creating an atmosphere of antagonism that runs quite contrary to that of local owners and developers.

Banking is another important consideration. When we put our money into large national banks (those are too big to fail, too, right?) then we’re allowing them to invest our money as they please. And I’ll tell you what, it does not please them to invest in the little guy here in Fort Collins that wants to try something quirky and new. Credit unions and local banks are for more likely to have a feel for what might, and what might not, work in our community. And they’re more likely to give the little guy a chance. If we want money to be invested in our community, then we need to be putting it into the banks that are willing make those local investments happen.

This slide is from Kimber Lanning’s talk entitled, “Local Economies and Livable Places: The Case for Preservation.” February 4, 2016. Kimber lives in Phoenix and was speaking in Denver, which makes sense of the cities she chose to focus on here.

The argument for supporting local businesses is bigger than just “local good – chains bad.” We want to build a community that:

For City staff and elected officials, this means making sure we have policies in place that support a balanced blend of of business types and sizes. For businesses it means taking stock of where you store your money and where your B2B partners are located. And for all of us, it means taking a chance on a local business that you might not have prior experience with, frequenting the ones you’ve tried and liked, and telling your neighbors about your experiences as a means of encouraging them to think and act locally as well.

This article is the second in a series on creating a vibrant local economy.

The top image of Starbucks vs. local coffee shops was suggested by Kimber Lanning who used a similar image in her talk at the Saving Places conference in Denver on February 4, 2016. I recreated the idea using local Fort Collins logos. I also used a couple of her slides directly from her talk as well as was inspired by her to think more holistically about the issue of having a strong local economy.

Other sources were credited within the text.

Main Street America offers a list of studies on Independently Owned vs. Chain stores. (Not all of the links are up to date. But I found that for some, if you copy the title and Google for the document, you may find it located somewhere other than the Main Street America page linked you to.)

The Small-mart Revolution: How local businesses are beating the global competition, by Michael H. Shuman.

Impact of Big-Box Stores on Jobs and Wages, a one page summary by the Institute for Local Self-Reliance.

Five Myths About Big-Box Retail, a two page summary by the Institute for Local Self-Reliance.