Then and Now: The Glenn Morris Field House at CSU

Labeled only as the “Men’s Gym” on the Colorado State University Archives & Special Collections website, what is now known as the Glenn Morris Field House is shown here in 1940 and 2014.

The comparison between the two photos is like a “Find the Difference” puzzle. Largely the same are the field house buildings, many of the old buildings around the oval in the background, an apartment building in the far lower right corner fronting S. College Avenue, the train tracks, and even a pedestrian underpass under the tracks. Notable differences include the smoke stack from the heating plant which is visible in 1940 and gone in 2014, the botany building to the middle right of the first photo which is now a parking lot, and the houses in the foreground along S. College where the Best Western now stands. 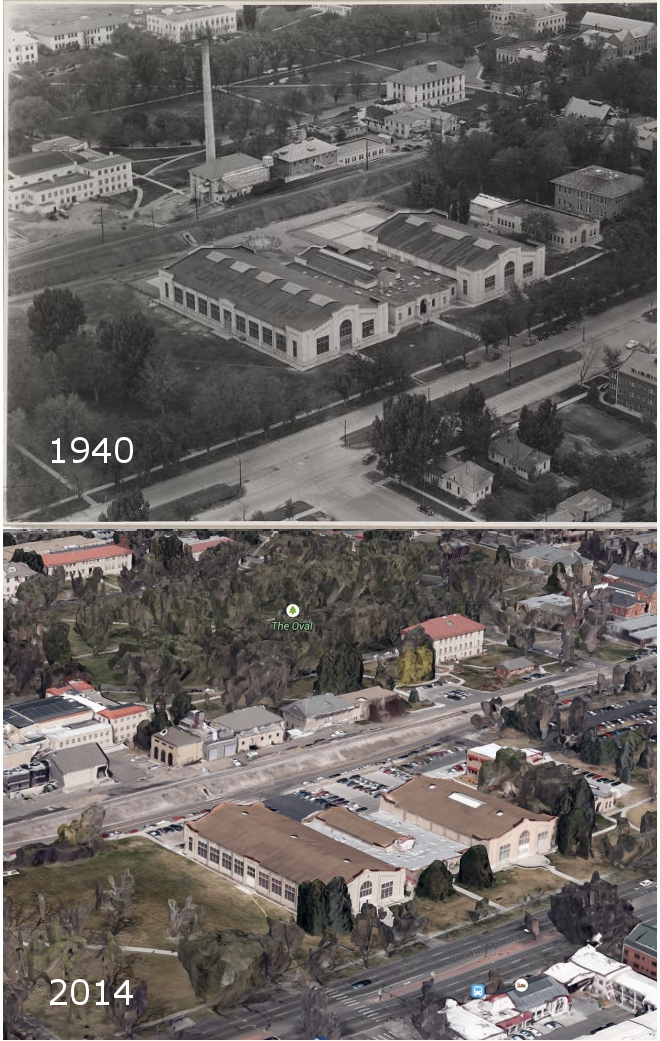 The field house was originally built in 1924 and was enlarged and renovated in 1998. In 2011, it was renamed the Glenn Morris Field House after CSU athlete and Olympic gold medal winner, Glenn Morris. Morris also played for a short time in the NFL and played the part of Tarzan in the 1938 movie, Tarzan’s Revenge. In the early 1990s, the field house was used in a scene from A League of Their Own, starring Geena Davis and Tom Hanks. (<– This information was taken from the CSU Sports website, but as with many things found on the internet, it turns out not to be true. *snap*)

The 1940 photo of the Men’s Gym is from the Colorado State University Archives & Special Collections Historic Photograph Collection online. They have a really wonderful collection of old photos available to peruse. If you haven’t done so before, I’d encourage you to take a look through them some time.

The 2014 photo of the field house is from Google Maps. Although Google has the copyright date listed as 2014, it’s possible that the photo was taken at an earlier date. (In last week’s Google Maps photo, we found that what was listed as 2014 was really from 2012 based on the presence of buildings that had been added or torn down within the shot.)

The information about Glenn Morris and the field house came from CSURams.com, CSU’s dedicated sports website.