The first classroom in Fort Collins was located in Auntie Stone’s cabin in 1866. As the number of students grew, the school was moved to the commissary on the recently abandoned military fort. This makeshift classroom made up the entirety of the school district in 1869 when District 5 was formed. It wasn’t until 1871 that the first schoolhouse was built at 115 Riverside. It was called the “Yellow Schoolhouse.” The building still stands today and is a designated local historic landmark. 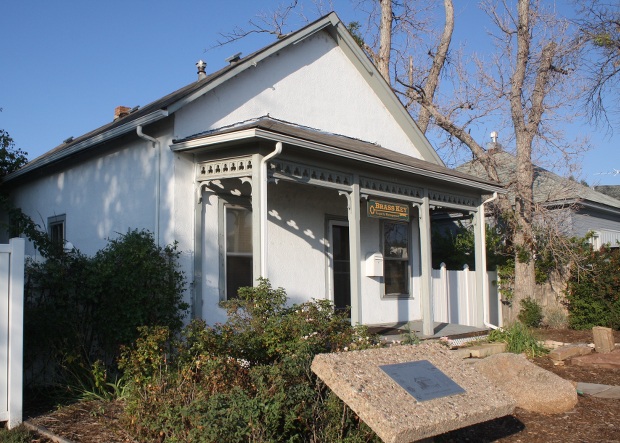 The “Yellow Schoolhouse” still stands at 115 Riverside, though it has not been yellow for a while now.

The Yellow Schoolhouse soon became crowded and in 1879 the district built a larger and grander building. Located at 318 Remington Street, it was generally referred to as “the public school on Remington street”. It was never given a formal name, and once another school was built, it was simply called the Remington Street School to differentiate it from the other school.

The Remington school had separate playgrounds for boys and girls with a fence between them, as well as two outhouses (likewise separated according to gender). The school was razed in 1967 and the DMS Senior Housing Apartments stand in that location today.

In 1880, the district added a kindergarten — the first west of St. Louis. While this was a progressive move for the small town, it meant just that many more kids attending the local school. As classrooms became packed again, rooms were secured in a commercial block on Jefferson street, near the corner of Pine, for overflow classrooms. In 1886, the Sanborn map listed these classrooms as being on the first floor and including one high school classroom, one kindergarten, one room listed as a “school room” and one room labeled the “‘Bee’ composing room.” These overflow classrooms weren’t given any name other than the classrooms in the Jefferson Block. 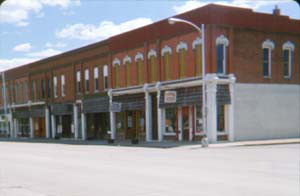 A January 10, 1884 article in the Fort Collins Courier described the public schools at the time. The “first primary” class was run by one teacher with an aide and consisted of 63 students, ages 6-9 years old. (The teacher and aide must have had nerves of steel to deal with that many young students!) They met in the Jefferson Block. The “second primary” met in the old Episcopal Church on Oak street (yet another sign that the city seriously needed another school building) and contained 45 students. The third grade (35 students), fourth grade (50 students), fifth grade (50 students), and sixth grade (50 students) all met in the public school on Remington street. And grades 7, 8, “and a high school class” were taught by Professor Remington, with an aide, and met in the Jefferson block (next to the kindergarteners). 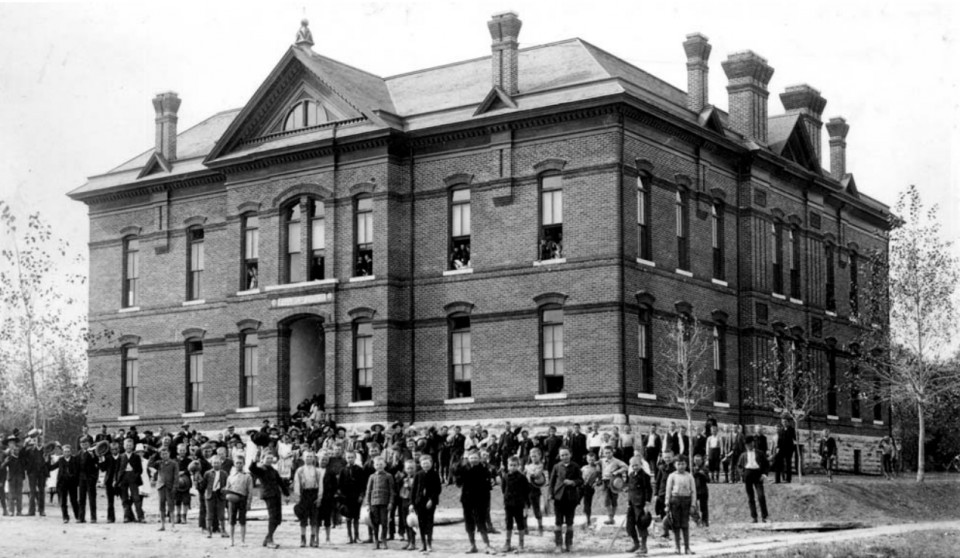 Clearly another school building was needed. In 1887, the Benjamin Franklin School was built at the corner of Howes and W. Mountain (where Steele’s Grocery later stood). This was the first school that was given a formal name. By mid-September, 290 had enrolled at Franklin School. Another 158 registered at the Remington school (which was now called by that name), and numbers were expected to increase as the harvest was brought in and farm children were able to attend classes. The Jefferson building and Episcopal church aren’t mentioned in the September 15, 1887 Courier article that lists the number of students in the schools, so all of those classes must have been shifted to the new school building.

In 1889, the school board decided to create a departmentalized high school. Although the district had already been holding high school classes, they were primarily taught by just one person, Professor Remington. By departmentalizing, the high school would have different teachers for different subject areas, meaning that students would be taught by people with a more in-depth knowledge within that area of study. In previous years, it was rare for high school students to remain past their freshman year.  When one student returned for sophomore year, it was notable enough to be pointed out in the newspaper. But when the high school was departmentalized, the students stuck around longer and in 1891, the high school produced 5 graduates (4 girls and 1 guy).

In 1903, a new building was finished that was intended to house the high school, although other grades were often located in the building as well. This building at 417 S. Meldrum Street was designed by local architect, Montezuma Fuller. The boys entrance was on the south side of the building and the girls entered from the north. Over time, several additions were made to the building. 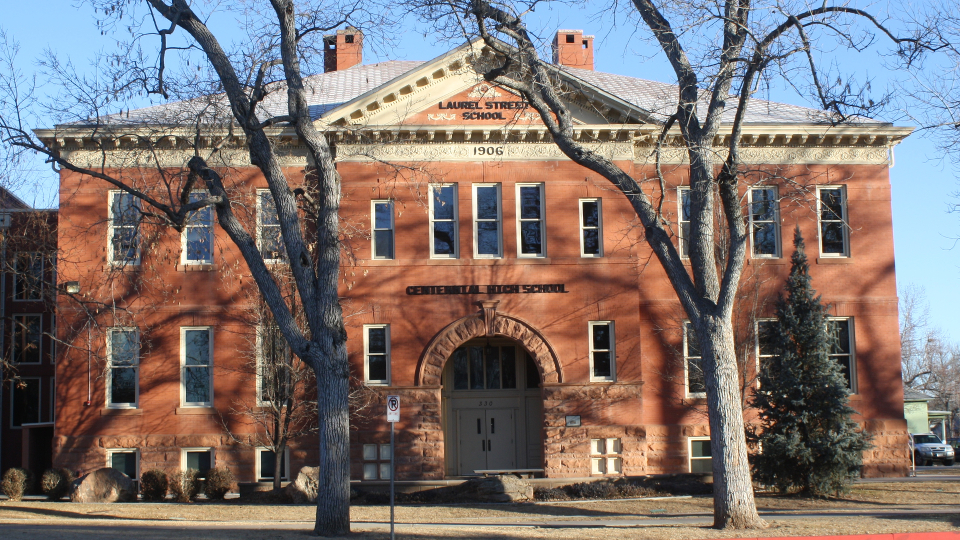 Two more elementaries were constructed in short order — Laurel Street School and Laporte Avenue School — both built between 1906 and 1907. Note that there have been six school buildings constructed at this point (though the original one was no longer being used as a school) and only one of the six received a formal name. The standard was still to refer to the buildings based on where they were located. 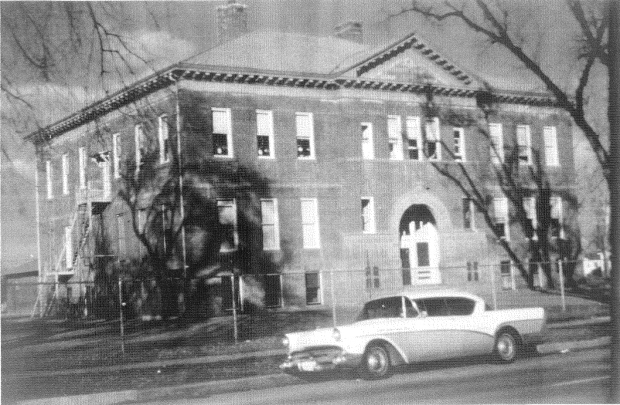 Laporte Avenue school was torn down in 1975. It was located on the 700 block of Laporte Avenue.
(Photo from Appendix A: A partial list of demolished structures.)

Laurel and Laporte Elementaries were also designed by Montezuma Fuller and were created as twin schools — built from the same plans. Using one set of architectural plans for two different schools saved the district both time and money and was employed on multiple occasions.

In 1919, another pair of twin elementary schools were added —  George Washington School at 233 S. Shields Street and Abraham Lincoln School at 501 E. Elizabeth. With these two schools, the trend of naming buildings based on their street location had been decisively done away with.

Lincoln Elementary, now called Harris Bilingual, has had extensive additions made to the school.

In 1922, a junior high was started with most of the classes of 7th and 8th grade students meeting in the Fort Collins High School on Meldrum Street. The high school had been built to hold 1,750 students, but it was bursting at the seams with 2,399 enrolled. After a fair bit of contention, it was decided that the district would build a new high school building to the south of town. Though many thought it was foolish to build a school so far away, the plan was passed and the high school was built. 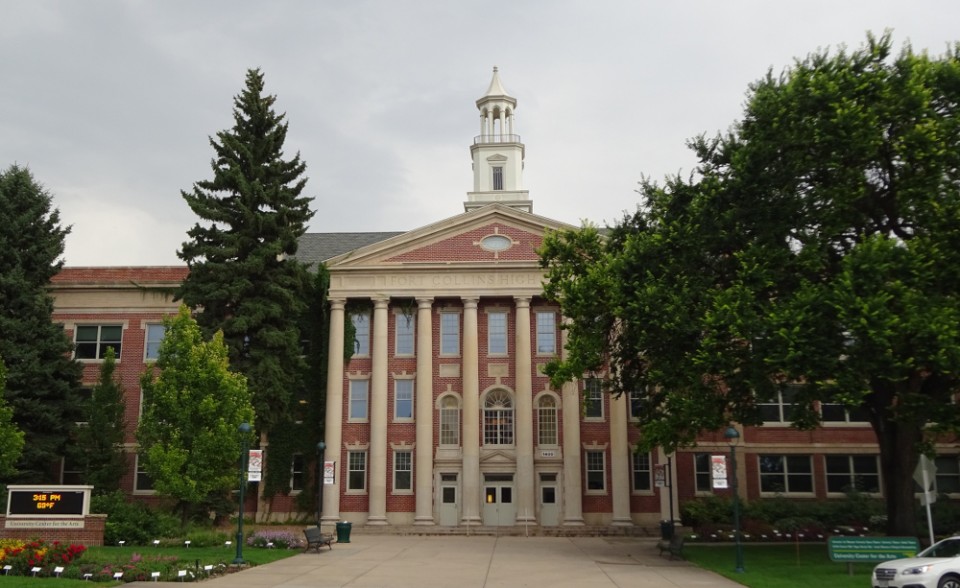 The junior high was allowed to expand into the old high school building and a few other grades were included there as well.

Growth slowed during the Great Depression and World War II and no new schools were added to District 5 for awhile. There was a name change made during this time, however, that’s important to note. In 1939, the district wanted to honor Mame Harris, who had been the first principal at Lincoln. She was an important community member and well appreciated within the school district. So Lincoln Elementary became Harris Elementary and it was decided that the junior high (which, up to that point had simply been called Fort Collins Junior High School) would take on the name Lincoln Junior High. (The Lincoln Center is now located where Lincoln Junior High once stood.)

Dunn Elementary, built in 1949, was considered to be a cutting edge building at the time.

In 1949, as soldiers returned from war, many moved to Fort Collins with their families to take advantage of the G.I. bill and attend Colorado A&M. So as the city began to grow again, another elementary school was built, this time in a much more Modern style of architecture. Rather than having two or three stories, the school was only one story tall and sprawled over a comparatively large plot of land. (The photo above shows only half the school. The younger grades meet in a wing to the left of the much newer entryway seen at left in the photo.)

This new school was named, not for an important American leader as Franklin, Washington and Lincoln schools had been, but for Albert Dunn who had been the district superintendent. He was particularly known for being able to push through the building of a new high school building on Remington Street despite strong pushback from the community. With the change of Lincoln Elementary to Harris Elementary, and now the naming of a new school after a former superintendent, a precedent was being set that survives to this day.

Putnam Elementary has had a large addition built that takes up about a half of the original courtyard.

Moore Elementary School now houses the Lab School and Polaris. A small new entrance has been added at center.

In 1955-56, three new elementary schools were added, all using the same architectural plan that included a main entrance at the back of a courtyard with classrooms encircling the courtyard on either side. Putnam Elementary School was built first and was named for A. H. Putnam, a well loved custodian of 40 years in the district. The building has had a couple of additions added, including a grand new entrance that covers about half of the original courtyard.

Barton Elementary was named after two sisters. Sue Barton was the principal of Rockwood School for 17 years and her sister Minnie had been the principal at the Laporte Avenue school for 28 years. The Barton Elementary school building has changed the least of the three schools in terms of architecture, but it’s changed several times in terms of use. For awhile, the Barton Early Childhood Center as well as the Discovery Museum were housed in the building. Today the Global Academy uses the site.

Moore Elementary School was named for Jessie Moore, a well loved teacher at Rockwood School. In 2010, Bauder and Moore Elementary Schools were merged, with the students and staff of Moore moving into Bauder’s building. Moore school now houses the Polaris Expeditionary Learning School (which includes the former Lab School).

[Rockwood School was originally built for the German-Russian children of beet workers near Andersonville. It was apparently built by the school district in 1908, but it’s not included in the same timelines as the other buildings that I’ve written about here, which makes me wonder if it was in a district of its own. It’s definitely a topic that should receive a post of its own as I’m sure the research will branch out into issues of xenophobia, racism, and classism in early Fort Collins. I believe Rockwood school was also called the Sue Barton school for a time.]

In the Back-to-School edition of the 1956 Fort Collins Coloradoan, there was a photo of Putnam Elementary under construction as well as a mention that two additional schools would be built within the year. These schools were referred to as the East and West Elementary schools, though they were later named Barton and Moore. At the time that these three elementary schools were built, the newspaper explained that they were meant to serve the “fringe areas” of the city.

These were the last schools built in District 5. In the summer of 1960, the decision was made to consolidate the multiple school districts of Larimer County into three larger districts – Thompson, Park, and Poudre. District 5 was consolidated into the Poudre School District.

I relied heavily upon In the Hallowed Halls of Learning: The History and Architecture of Poudre School District R-1 (pdf) for the overall progression of buildings and dates of construction.

Information on the Barton sisters came from the booklet that is being developed for the upcoming Fort Collins Cemetery Stroll.

There’s also this early history of Fort Collins schools, though I found notable gaps in which schools were covered.