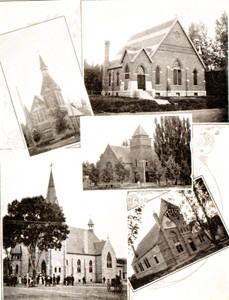 Five of the Ten Churches in Ft. Collins, from a 1902 booklet “Fort Collins and Environs”. Clockwise from top left: Presbyterian,  Christian, Methodist, Baptist, and Catholic.

Easter is just around the corner. If you’re interested in attending services, but you don’t know which church to visit, might I suggest attending one of our five oldest church congregations in town? Their original buildings may be long gone, but the institutions themselves are well over a hundred years old and embody several important facets of Fort Collins history – not just worship, but life events such as baptisms, weddings, and funerals, as well as social events, fundraisers, clubs, and charitable endeavors.  What better time to visit one of these institutions than on the biggest holiday (read “holy day”) of the year? 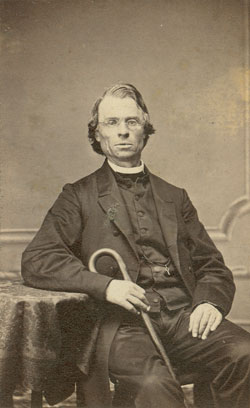 The first religious service in Larimer county was held in 1863 by a circuit rider (an itinerant preacher) at a farm house in what today is Loveland. (Of course, when I make this statement, I’m ignoring all of the religious events that took place in the area among the native Americans who lived here long before we did.)

The first service held in the city of Fort Collins took place three years later in Auntie Stone’s cabin when Father Joseph Machebeuf (a missionary from France who later became “Vicar Apostolic of Colorado and Utah territories” and eventually the bishop of Denver) came and held the first mass. It takes more than one service to form a church, however, and the Roman Catholic church doesn’t seem to have gotten its formal start until years later.

In the 1874 newspapers that I reviewed last month, only two churches were listed: the Methodist Episcopal Church with Reverend R. W. Bosworth and the Presbyterian Church with Reverend Joseph Patterson. However, by 1879, there were four churches listed in the paper: Methodist, Presbyterian, Episcopal, and Roman Catholic. Only the Episcopal church met weekly. The Presbyterians and Methodists met every other week and seemed to share a building. And the Catholics only met once a month and that was in the home of the Michaud family. 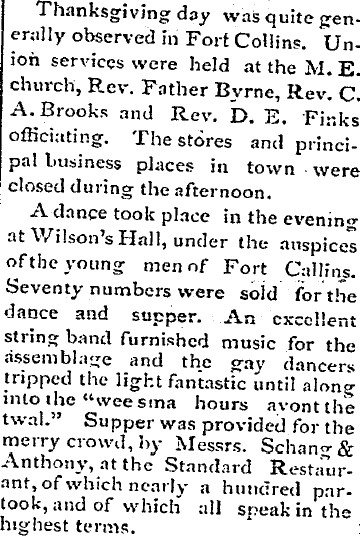 Thanksgiving was celebrated as an entire city. Fort Collins Courier

Each of these churches have their own stories, but there was also a lot of fellowship between the congregations. I was delighted to discover mention of “Union services,” a term I’d never heard before, in the November 30, 1878 paper. The three congregations met in the Methodist Episcopal Church, but the pastors of not only the M.E. church, but also the Presbyterian church and St. Luke’s, were involved. The Catholics were notably missing, however, so there were apparently limits to this Christian fellowship.

The Baptists didn’t get organized in Fort Collins until the summer of 1879. So from my research, the first five churches in Fort Collins were the Methodist Episcopal, the Presbyterian, the Episcopal (St. Luke’s – the only one referred to by a name other than just the name of the denomination), the Roman Catholic and the Baptist churches. All five of these churches are still in Fort Collins, although some of their names have changed over the years. We now have (in the same order) First United Methodist Church, First Presbyterian, St. Luke’s, St. Joseph’s, and LifePointe churches. Here’s a quick look at each of their stories. 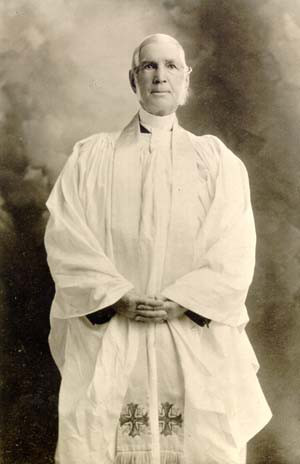 The Methodist church has a historian who regularly updates a small display case near the entrance to the church. (As you walk in from the south side parking lots, glance left.) The church was also able to send me a short history of the congregation. What follows is an edited version of that.

The beginning of the Methodist Church in Fort Collins is formally identified in 1867 when a class was organized by Rev. O.P. McMain.  The first appointment, which gave Fort Collins regular services, was Rev. G.W. Swift on June 28, 1869.  These services were held in the Old Grout Building at the corner of Linden and Jefferson Streets.  The first church building , erected in 1873, was a 30 x 40 foot frame structure at the corner of LaPorte and Mason Streets.  Because of swampy conditions and the construction of the Colorado and Southern railroad tracks adjacent to the building, the members decided to move the building to a site on East Mountain Avenue.  As the church grew, a new building was erected and dedicated in 1898 at the corner of Olive and South College Avenue.  This church was enlarge four times but, by the middle of the 1950’s, the congregation had grown so large they needed to look at building a new church.  In 1960, the church purchased a six acre site at Elizabeth and Stover.  The cornerstone laying ceremony for the new church building was held in the fall of 1963. There have been two major additions to the church since that time. 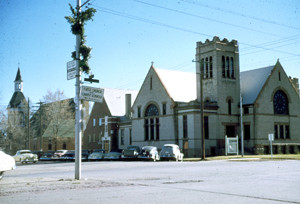 The Methodist Church around 1957 at the corner of Olive and College. This corner is now a parking lot for Perkins Restaurant. The spire of the old Presbyterian Church (that by this point housed another congregation) can be seen to the left.

First Pres. has an uber short description of their history on their web page.

First Presbyterian Church has a wonderful history of Christian ministry in Fort Collins since August 25, 1872. The Holy Spirit has used the men and women of this church to make our city the wonderful place that it is. Streets and schools bear their names: Mason, Mathews, Peterson, Stover, Whedbee; Shepardson, Dunn, Kruse and several others were named for the contributions that these Christians and Presbyterians made to the life of our fair city. That remarkable contribution continues, with members of our church, inspired by their faith in Christ, being active in nearly every aspect of life in Fort Collins.

If you’d like to spend Easter with the Presbyterian church, you’ll find them on the block bounded by Myrtle, Mason, Mulberry and College. They are hosting a modern day version of the Union service that was held back in 1878 with a pastor from a different church speaking each day at noon during Easter week. On Easter day, they will have two services, one at 9:15 and the second at 11 am. To find out more about their Easter week events, check out their website. 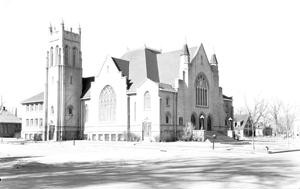 First Presbyterian Church in the 1930s – at the corner of College and Myrtle. The Lutherans moved in to their old building (the one shown on the booklet cover at the top of the page).

On the first Sunday in May 1875, an Episcopal mission station, St. Luke’s, was established with regular services. St. Luke’s was first housed in Tutton’s Hall, a small building at the corner of Mountain Avenue and Linden Street. It had previously been a bank building and was even used as a billiards hall at one time.

Growth of the city and the tiny mission dictated a move to a new building at the corner of College Avenue and Oak Street. Consecrated in 1887, the tiny stone church in downtown Fort Collins was used for services until parish growth, about 168 communicants, necessitated a larger facility. The church building where we presently worship was consecrated February 14, 1965.

If you’d like to spend Easter with the Episcopalians, you’ll find them on Stover, just south of Stuart street. They’ll have events from Thursday through Sunday including Stations of the Cross on Friday and two services on Sunday (at 9 and 11 am). To get all the details, check out the left margin of their website. (While you’re there, check out their historic organ.) 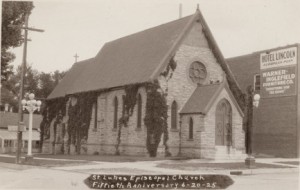 St. Joe’s has the most extensive description online of their church’s history of any of the churches I looked at, thanks to Mary Ann Burridge who put it together. Rather than cut and paste a quote from their site, I’ll just write a short summary.

Traveling priests (called missionaries) visited Fort Collins between 1866 and 1878, treating the area as a Mission parish. Services were held in people’s homes. Bishop Machebeuf returned to Fort Collins in 1878 to say mass in the Old Grout building. While he was here, the bishop authorized Frank Michaud to buy the old school house at 115 Riverside. (The building is still there, but looks a bit different today.) Father Abel was also assigned to the church.

There was a succession of priests over the following years until, in 1899, Father LaJeunesse (a Canadian) was sent to St. Joseph’s. With 1000 parishioners, he felt that the old school house turned church was no longer suitable. He purchased land at the corner of Mountain and Howes over the objections of some parishioners who felt that a new church would be too expensive. The building that Father LaJeunesse built is the only old church building in which the same congregation continues to meet.

A school was added behind the church in 1925. The church building was remodeled in 1960. That’s when the familiar arches out front were added and the entrance was moved. The school also underwent remodeling in 1965.

If you’d like to spend Easter with the Catholics, you’ll find them in their lovely old church building at the corner of Mountain and Howes. They’ll have events from Thursday through Sunday including Stations of the Cross on Friday and three masses on Sunday (7:30, 9:30, and 11:30 am). To get all the details, check out the left margin of their website. 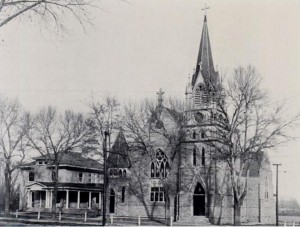 St. Joseph’s Catholic Church. Note the windows in the center where doors and arches are now.

The First Baptist Church was organized on June 29th, 1879 with the help of the Baptist pastor from Loveland, M. Harry. The church met in the Presbyterian’s building in the beginning, but in 1888 a small brick structure was built at the corner of Magnolia and Remington. That building was later replaced by a Gothic Revival structure that still stands at the corner today (although another congregation now owns and uses the building). The congregation moved, along with a growing Fort Collins, towards Prospect Road in the mid-1900s. You can find out more about the history of the Baptist congregation in a book entitled Our First Hundred Years, edited by the Centennial Committee of the First Baptist Church. (There should be a copy in the Archive.)

If you’d like to spend Easter with the Baptists, you’ll find them right next door to Lesher Middle School on Prospect Road. They don’t have much information on their website, but they are holding two services on Easter day (9:30 and 11 am). 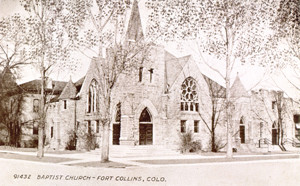 First Baptist Church. This Gothic Revival style building still stands at the corner of Magnolia and Remington, but a different congregation uses the building.

I learned the tidbit about the circuit rider when I was visiting Timberlane Farm in Loveland last week. If you haven’t visited that place, I’d encourage you to try to make it down there. There is soooo much of interest there.

Father Joseph Machebeuf sounds like an incredible man. You can read more about him on the history page of the high school that has been named in his honor, or view the wikipedia page about him, in which it is explained that “His life was the basis for the character Joseph Vaillant in Willa Cather’s 1927 novel Death Comes for the Archbishop.”The photo of Joseph Machebeuf was taken from the high school history page.

The photos of the 1902 booklet showing 5 early churches, Francis Byrne, the Methodist church in 1957, and the Presbyterian Church,  St. Luke’s, and the Baptist church at Remgington and Magnolia are all from the Fort Collins History Connection.

The photo of St. Joe’s is from the book Fort Collins: Then & Now by Barbara Fleming and Malcolm McNeill – a book I’d highly recommend and that you can find at Old Firehouse Books (which is where I got my copy).

The start date of the Baptist church came from the July 3, 1879 Fort Collins Courier. More information on the building that still stands at Remgington an Magnolia can be found in this historic preservation pamphlet – Getting to Know Fort Collins: Historic Landmarks.