Last month I attended a public open house for the City’s Climate Action Plan. It was a standing room only event. Back in March, the city council unanimously passed one of the most aggressive municipal plans to reduce community greenhouse gas emissions. The open house in December was one step towards educating the public, as well as getting feedback from residents on plans and programs the City is implementing or considering that will have a positive effect on reducing waste in the city.

As you can imagine, I was particularly interested in the issues of historic preservation and transportation in regards to reducing waste and carbon emissions. So I checked in at both the transportation “booth” and the waste stream/redevelopment “booth.” (They weren’t really booths,… more like posters on easels with City staff standing around them.) The folks at the transportation station clearly got the connection between waste, pollution, and transportation issues. I think most of us see that connection fairly clearly. But when it came to the positive environmental impact of preservation, it was clear that the Climate Action Plan folks hadn’t really thought that one through… at all. So I encouraged them to look into how the two relate, but I also thought it might be helpful to dig in to some of the research that’s been done on the topic and write a summary here for local preservationists and environmentalists to learn from. 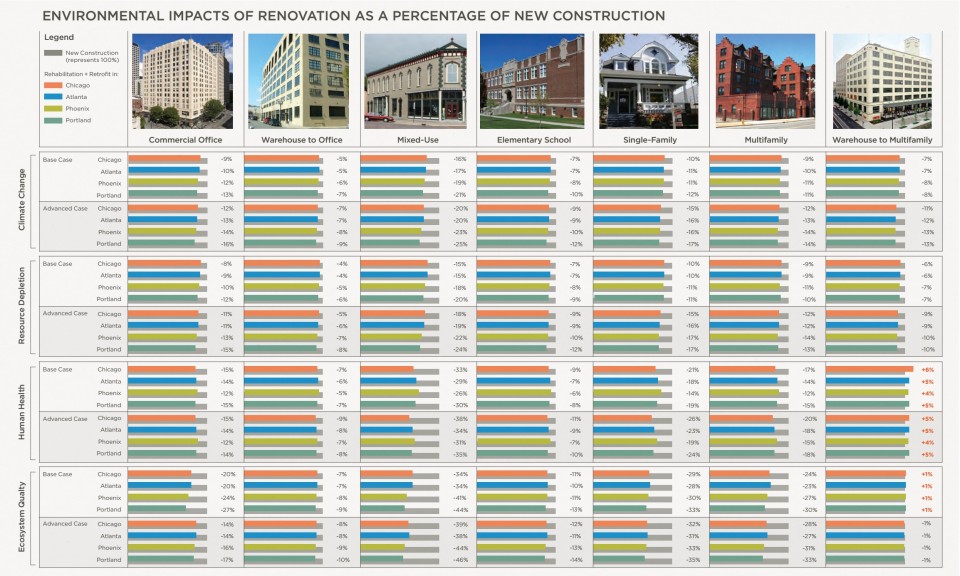 In the 2011 study entitled “The Greenest Building: Quantifying the Environmental Value of Building Reuse,” buildings of various size, type, and location were taken into consideration. (This image is taken from the Summary of Results page of “The Greenest Building” study.) Click to expand image.

In a study that came out in 2011 entitled, “The Greenest Building: Quantifying the Environmental Value of Building Reuse (pdf),” researchers took a look at the environmental impact of building reuse vs. demolition and construction of a new building. The study concluded that “when comparing buildings of equivalent size and function, building reuse almost always offers environmental savings over demolition and new construction.”

“the total energy required for the extraction, processing, manufacture and delivery of building materials to the building site. Energy consumption produces CO2, which contributes to greenhouse gas emissions, so embodied energy is considered an indicator of the overall environmental impact of building materials and systems.”

The “Greenest Building” study determined that, “It can take between 10 to 80 years for a new energy efficient building to overcome, through efficient operations, the climate change impacts created by its construction.”

In fact, new construction can bear such a heavy environmental impact that, “Reuse of buildings with an average level of energy performance consistently offers immediate climate-change impact reductions compared to more energy-efficient new construction.” So even if your older building isn’t LEED certifiable, that doesn’t mean that it’s more environmentally sound to tear it down and replace it with a building that is LEED certified. (Part of the problem with LEED certification is that it doesn’t weight reuse and restoration at a level that matches the actual positive environmental impact imparted from reusing an older building.)

Not all buildings can be reused as is. There is sometimes some amount of retrofitting required to better fit the structure to a new use or to the same use that has gradually changed over time. (For example, single family homes can be retrofitted to still be single family homes, but they can be better suited for today’s family with modern appliances and additional space.) In looking specifically at the city of Portland, the study concluded, “Retrofitting, rather than demolishing and replacing, just 1% of the city of Portland’s office buildings and single family homes over the next ten years would help to meet 15% of their county’s total CO2 reduction targets over the next decade.” That’s significant!

And the fewer new materials needed for renovation or retrofitting, the better. Reusing an older building, but tearing most of it up and replacing it with new materials, substantially undoes any environmental savings from the reuse of the structure. So the more of the original fabric of the building that can be maintained, the better for the environment.

There are substantial historic, social, and economic benefits from preserving an older building. To read more about some of these other benefits, check out these previous Forgotten Fort Collins posts:

As the National Trust for Historic Preservation website summed up, “Communities would be wise to reinvest in their existing building stock. Historic rehabilitation has a thirty-two year track record of creating 2 million jobs and generating $90 billion in private investment. Studies show residential rehabilitation creates 50% more jobs than new construction.” Who wouldn’t want to improve social stability, strengthen the local economy, and reduce pollution levels in one fell swoop? Historic preservation makes a lot of sense for communities that are looking to build a sustainable future.