A Slideshow of Houses from Historic Loveland

Last week I took the self-guided walking tour of residential historic Loveland. There are twenty-one properties that are included in that tour, but as I walked, I saw so many other buildings that caught my attention. So I snapped photos of them as well and have included several in the slideshow above. [Note: When Forgotten Fort Collins became Northern Colorado History, the slideshow didn’t port over with the rest of the information. I’ll hopefully get it restored some day.]

Note that just because a house is included in this slideshow does not mean that it’s historically significant. Several of these buildings have undergone various levels of change, and for some, the type or extent of that change could affect the house’s eligibility for historic designation.

There are also a few houses that I want to make some comments on. 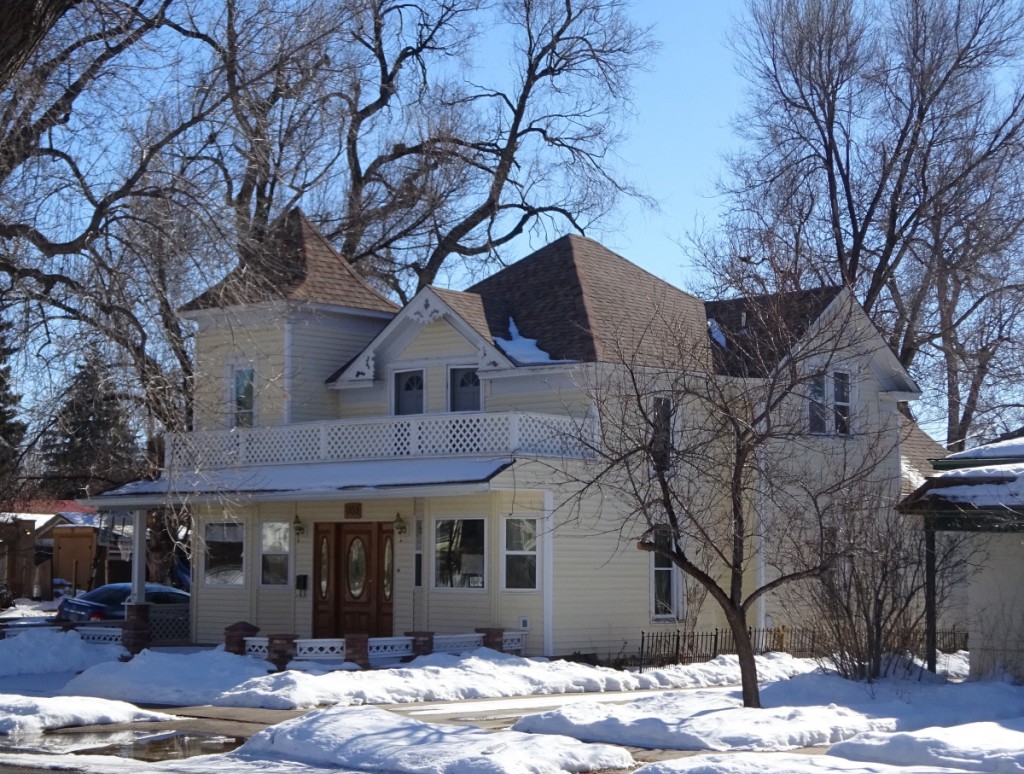 I found this house at 904 West 5th Street to be interesting both because it’s a rather grand looking house, and because it’s an example of what’s quite likely a muddled house. I haven’t looked up old county assessor’s photos of the house, so I don’t know what it looked like originally, but the porch seems to be a significant addition and, in my opinion, seems to harken back to the 1980s or 90s rather than to 1902, when the house was built. (According to the county assessor’s records online, the house did undergo a remodel in 1996.)

What does it mean that the house has been modified with this front addition? Well, it gives the owner more room, for one thing. But because the addition is in the front of the house, and it significantly changes the look and feel of the property, it’s unlikely that this house would be eligible for historic designation or any of the significant financial benefits that comes from such a designation. 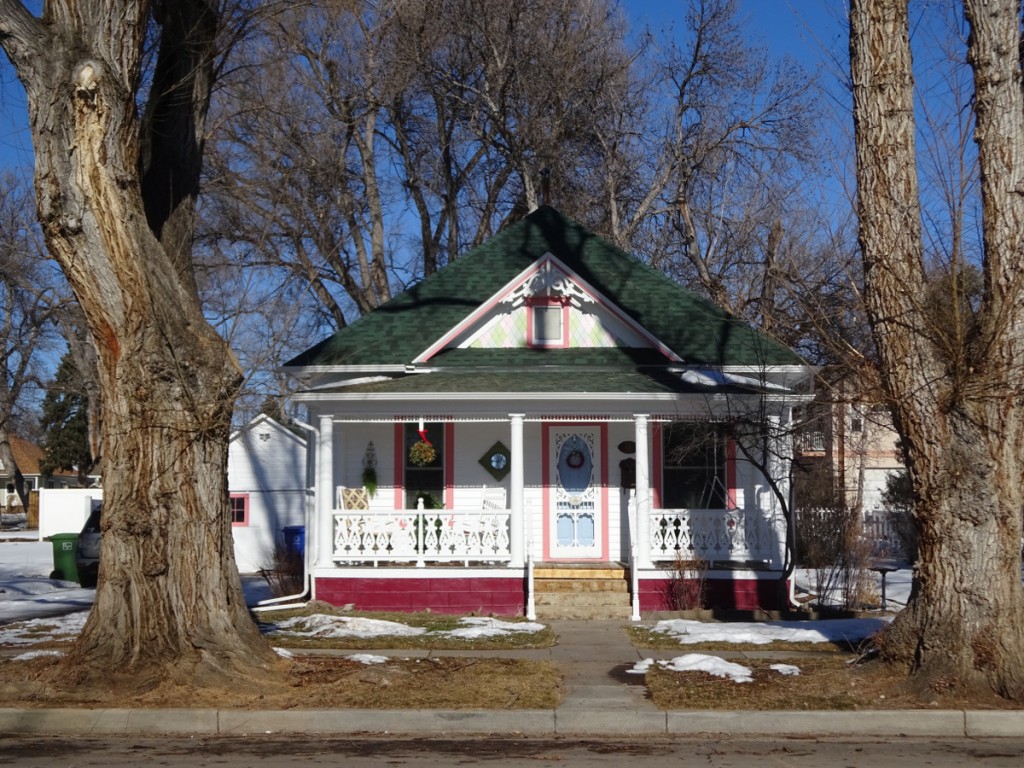 I snapped this photo because I loved the old West feel with the gingerbread on the front porch and gable. But when I looked the house up on Google Streetview to confirm the address, I saw that all of that gingerbread has been added since the Google car last went down West 4th Street in Loveland. In fact, this house looks significantly different than it did then.

It’s possible that the owners found an old photo of the house and restored it to its original look. But it’s also possible that the owners wanted more of a fancy Victorian style look to their cottage and decided to add it. I’ve heard people refer to this as making a building look even more like the time period its from than it did before. The only problem with “making a building look more like its time period” is that it confuses the history of the building. We preserve history best by preserving what it was, not what we wish it was or imagine it to have been.

What would this mean for possible historic designation? Well, if the owners restored the house to its original 1903 look based on photographic evidence, then this house might very well be eligible. But if they added features that were not original and have muddied the look of the house from its original, then they’d be much less likely to be able to procure designation and the benefits that come with it. 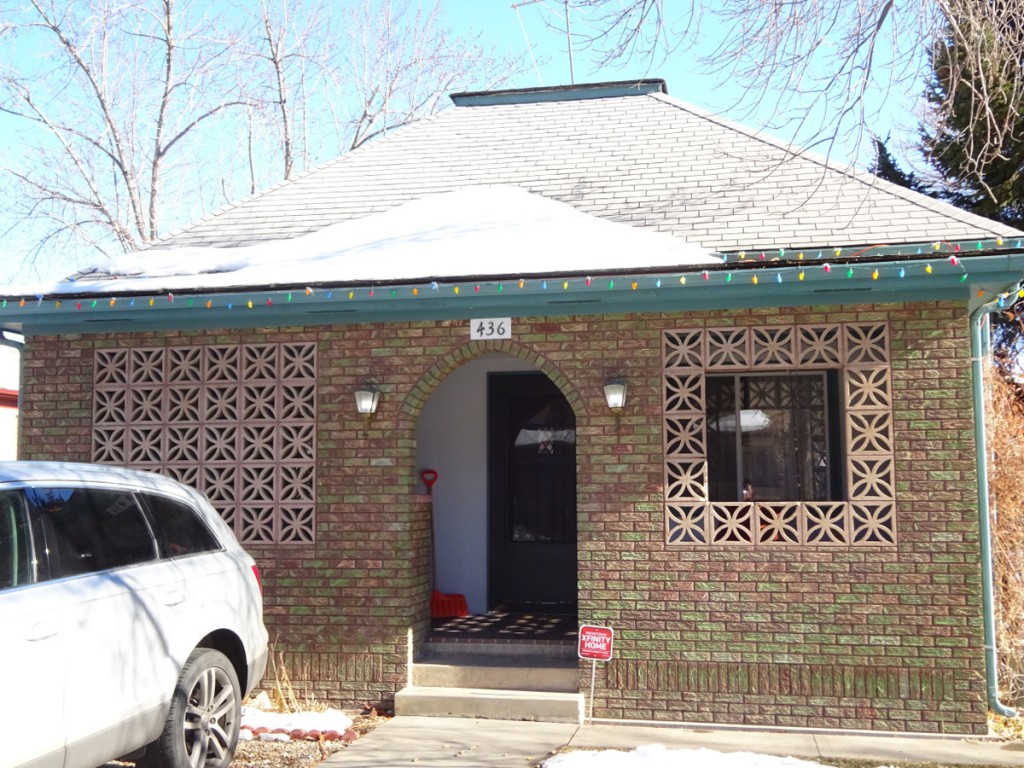 This house really intrigued me. I know, I know. You’re probably giving me the look of “WTH, Meg!” right now. But hear me out.

Styles change over time. And, as described with the houses above, we may look at our house and say, “Hey! This looks old. I’m going to fix it up and make it better than ever.” So changes are made that fit the present day ideal of what we think a house should look like. And that’s exactly true of this bricked-in front porch. Back in the fifties and sixties, these decorative cement blocks were all the rage. Many buildings from that time period used them as “screens” or as a decorative device in a projecting part of the building.

This house on Grant Avenue has had a porch added that very clearly fits a specific time and style from around the middle of last century. Could it be designated? Well, that depends. The original house (built in 1900) has clearly been altered. But the alteration was mostly likely made over 50 years ago, which means it could be considered. I kinda doubt that this house would be found eligible for historic designation. But I still find it an interesting example of the kinds of changes that people make to their houses over time. When the work was done, the home owners probably felt they were really making a stunning improvement to their house. I wonder how often we do something to our house, proud of the work we’ve done, only to have someone walk past 50 years from now slapping their palm to their forehead and exclaiming “What were they thinking?!”

I think it’s a great example of human nature. We do what is right in our own eyes. And sometimes it turns out to be right in others eyes, and sometimes not. Either way, when we’re talking about what we do to houses, we’re talking about artifacts that tell a story of time, place, economic vibrancy (or lack thereof), cultural values, and fashion. Whether they’re historically eligible or not, these houses all still tell a story.