Mason street has experienced an extreme makeover. My favorite change is the smooth new track crossings. My library books no longer fly out of my bike basket every time I cross the train tracks. We also have new curbs, a new guideway between Laurel and Drake, a bike bridge, and the MAX Transit line (which comes with all of its own little extras like nature sounds at each stop, artwork, and self-serve ticket booths). As a resident of Fort Collins for almost 13 years now, I assumed that the train running straight down the center of a city street was just one of the funky quirks of Fort Collins. I kind of viewed the train as being the interloper on a street made for cars. But from talking to people and looking at old photos, I think it’s historically been the other way around. The focus of Mason street between Cherry and Laporte, in particular, has been all about the train — for passengers and for cargo.

I’ve already written about the presence of the railroads in town: A Train Runs Through It. This time around we’re going to look at Mason Street, which includes the train, but also the Strang Grain Company, Auntie Stone’s cabin, and several other buildings along the street. I’m sure I’ll miss things (either because of ignorance or simply lack of space to include everything I’ve found), so feel free to add comments, stories, and photos in the comments.

In describing why the city is putting a focus for development along the Mason Corridor, the metaphor has been used of a north-south “spine” along which transportation can travel and growth can develop. As we look at historic photos from Mason Street, we’ll start at the north end of this spine. 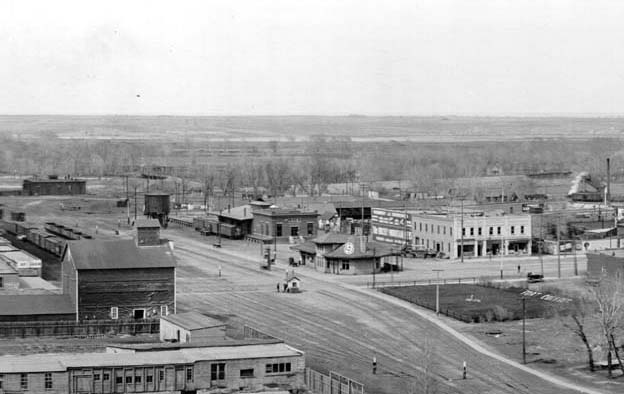 An aerial shot of Mason Street from Laporte to Cherry in 1912.
(Photo thanks to the Fort Collins Waterways Collection.)

At the very end of Mason Street, just to the west of where the Museum of Discovery stands today, is a solitary building. (If you know what that building is, I’d love to hear about it in the comments.) That building marks where Cherry Street runs from east to west. Along Mason, you’ll note, there are several train lines and not a car in sight. Granted, cars were still fairly new in 1912, so we wouldn’t expect to see many. But the road here is clearly meant for trains. It is, in the most literal sense, a rail road.

There are several buildings in this photo that are worth taking note of. Just below the center point of the image is the Colorado & Southern Passenger Depot which stood at the intersection of Mason and Laporte. Built in 1899, the building was torn down in 1952, in large part because the depot stuck way out into Laporte Avenue. Just up and to the left of the passenger depot stood the C&S Freight Depot, a structure that still stands today. Built in 1906, it replaced the building in the photo at the very top of this post. The freight depot was made a historic landmark in 1995 and is now called the Downtown Transit Center. Though no longer able to catch a passenger train to Denver at this location, it is possible to catch a bus to other parts of town as well as to Longmont (with FLEX). The Downtown Transit Center is also the new home of the Fort Collins Bike Library.

There will be festivities on May 10th – that’s this Saturday – to celebrate the inaugural MAX Transit runs as well as the opening of the FC Bike Library. Here’s more info for the MAX Launch and the Bike Library Grand Opening. This would be a great time to pop by and check out the historic depot as well.

To the right (east) of both depots stands the Myron Akin building. The front (brick) portion of the building was razed in the 1970s and replaced with the front of what is now Washington’s Bar & Grill. (Watch for a post coming soon-ish on this building.) 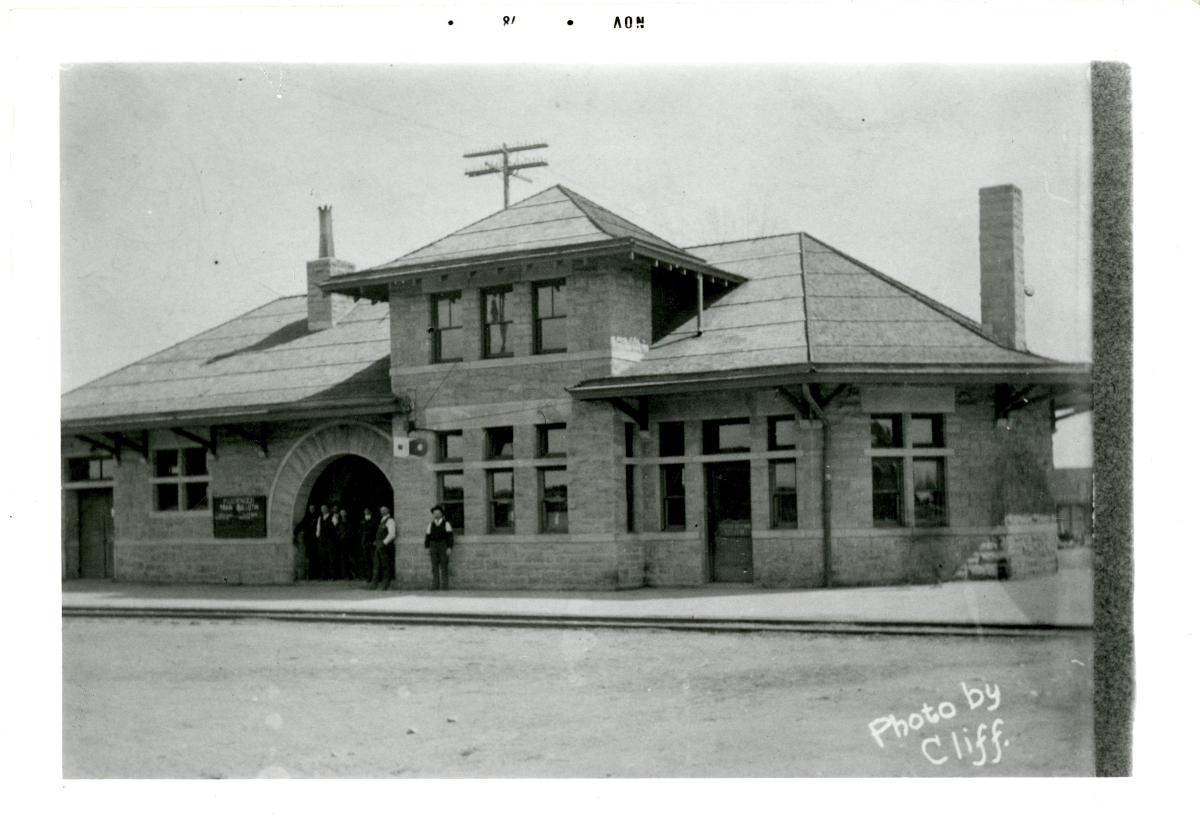 The Mason Street side of the Colorado & Southern Passenger Depot.
(Photo courtesy of the FCMoD Archive… and Cliff.) 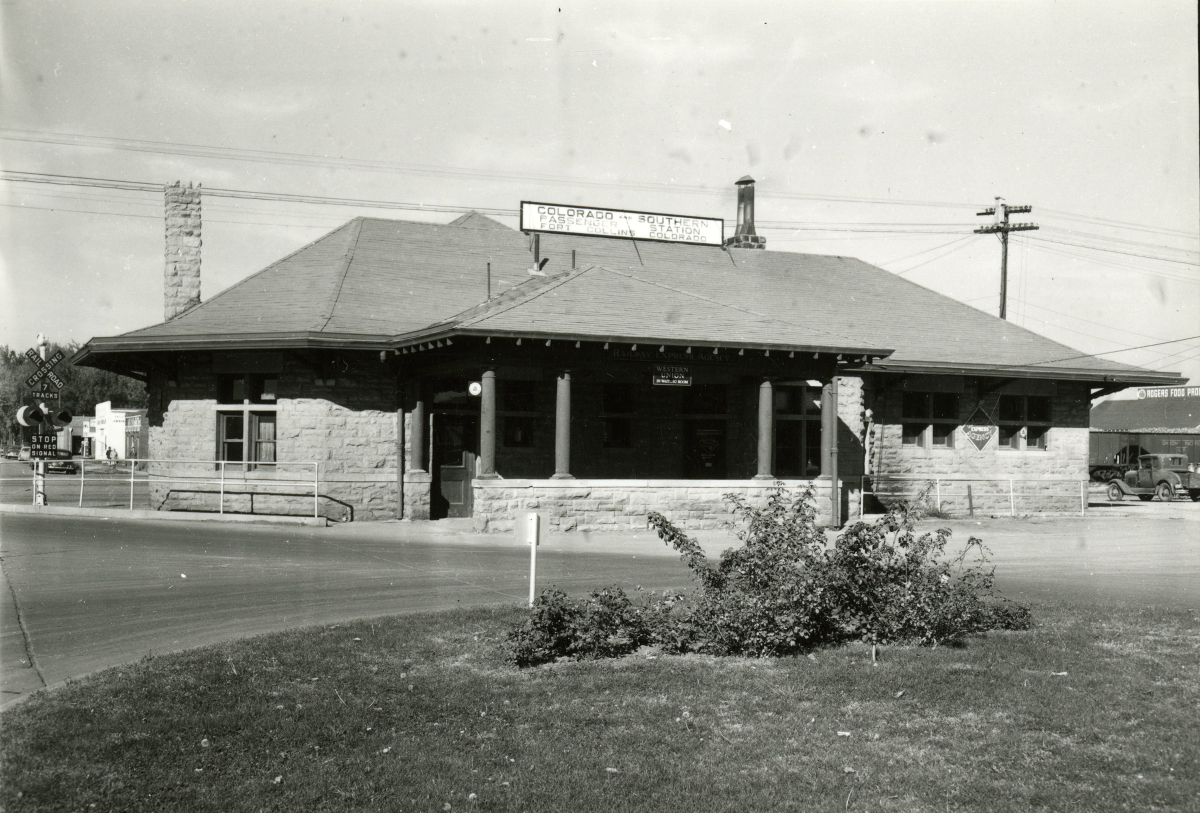 Laporte side of the Colorado & Southern Passenger Depot. West bound Laporte curved right in front of the station (for easier passenger drop off, I would guess).
(Photo courtesy of the FCMoD Archive.) 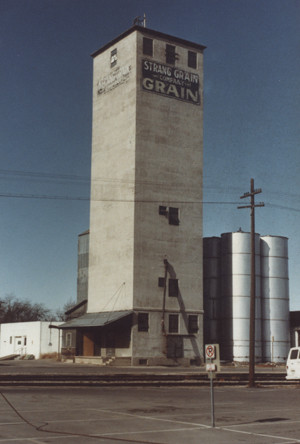 The Strang Grain Company was located just south of the depots, on the 100 block of North Mason. This building was demolished in 1983. (Photo courtesy of the Fort Collins Historical Collection.) 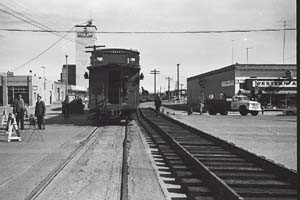 Looking north on Mason, at Mountain Avenue, the Strang Elevator can be seen to the left of the train. 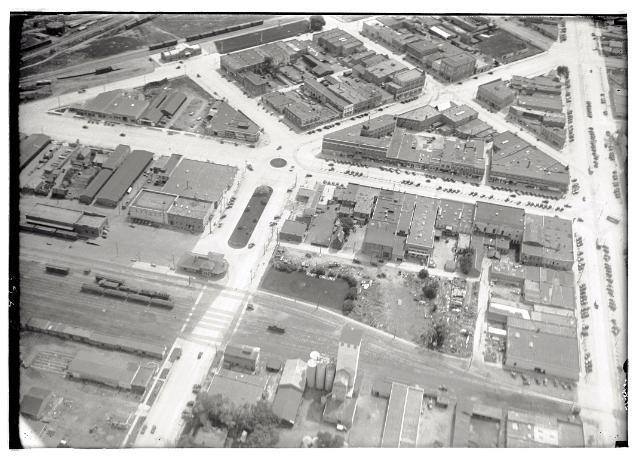 Aerial photo of Old Town as well as the depot and train lines on Mason Street. (Photo courtesy of the CSU Archives & Special Collections.)

Before we head south of Mountain Avenue, I want to take one last look back at this part of town. In this aerial photo you can see just how much the passenger depot stuck out right into Laporte Avenue. (You’ll also notice a roundabout at the intersection of College, Laporte, Walnut and Pine! It looks like roundabouts aren’t just a new-fangled invention.) I count 8 train lines on Mason, though I’ve heard tell there were actually 10. The Strang Elevator is near the center bottom of the photo. And the two parts of the Akin building can be clearly seen. (The back part still exists. The front part is now the front patio of Washington’s Bar & Grill.) 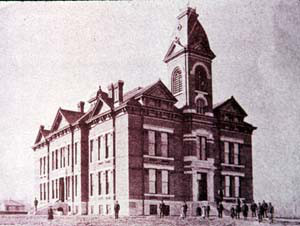 The Larimer County Courthouse in 1887. (Photo courtesy of the Fort Collins Historical Collection.)

Looking west from Mason, one would see the old courthouse facing Oak Street. This was the same courthouse that James Howe was dragged off to after he murdered his wife, Eva. It was apparently the third in a series of county courthouses in Larimer. 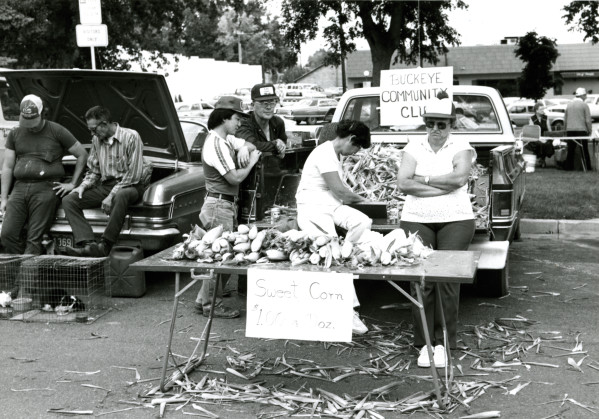 Farmers Market by the Larimer County Courthouse in the 1980s.
(Photo courtesy of the Fort Collins Historical Collection.)

The 4th iteration of the county courthouse allowed for a farmers market in the parking lot along Mountain Avenue in the 1980s. (The court house that stands between Mountain and Oak today is the 5th. It still hosts a farmers market on the summer weekends.) 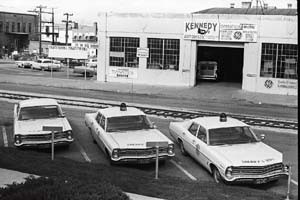 Kennedy Transmission Service on Mason in 1968 (where Everyday Joe’s is today). Sheriffs’ cars are parked on the west side of Mason, towards the county courthouse. (Photo courtesy of the Fort Collins Historical Collection which acquired it from the Coloradoan.) 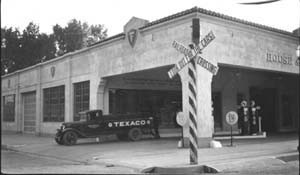 House & Humphrey Texaco Station at the corner of Mason and Oak Streets circa 1933. This is where the new d’Vine Bistro is located today. (Photo courtesy of the Fort Collins Historical Collection.) 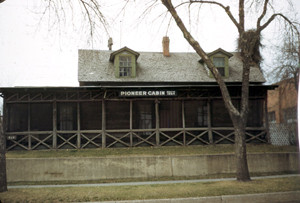 Auntie Stone’s Cabin when it was located on the 200 block of South Mason.

Auntie Stone’s cabin was built in 1864. In addition to being Elizabeth Stone’s home, it was also used as the officers’ mess hall for the soldiers of Camp Collins. When the camp was abandoned, it became a public eating house. Auntie Stone’s niece, Elizabeth Keays, ran the first school house in this building. In 1873, the cabin was moved behind the Agricultural Hotel at Mason and Mountain where it was used as the kitchen and laundry. In 1909 it was moved down to the 200 block of Mason Street. And again in 1959 it was moved to its current location by the old history museum/originally the Carnegie library/now the Arts Incubator of the Rockies. The cabin has seen numerous uses, many of which involve community events which has enabled many, many Fort Collins residents to grow up with fond memories created within the walls of the Pioneer Cabin. 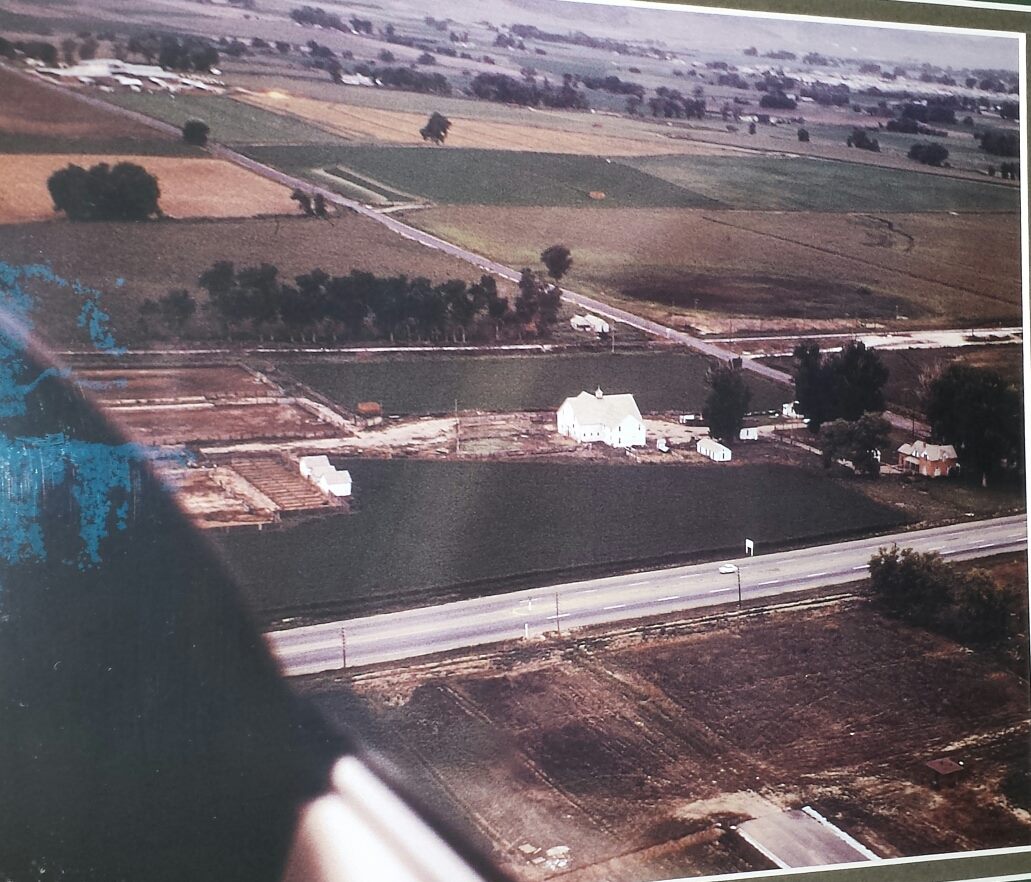 An aerial shot of the farm southwest of College and Drake in 1964. (Photo courtesy of Sal de Leo.)

There are many other memories along Mason as it continues to run south. Houses along the street gave way to the Colorado Agricultural College where one might see Old Main in all her glory before she was lost to flames in 1970, or the old train station located nearby that was later moved to City Park where it is used today as the ticket office for the Fort Collins Trolley. But I want to jump even further south to the areas along the Mason Corridor south of Prospect. In this last photo, we see the Deines family farm at the corner of Drake and College in 1964. This photo is indicative of what one would have seen leaving Fort Collins and heading south towards Loveland. Growth was beginning to gobble up these farms, as you can see in this aerial shot with the beginning of a new street (Harvard) near the bottom of the image. According to Sal de Leo, this land was owned by Frank Arnolds and before that by Senator W. A. Drake.

Mason Street has changed significantly in the past 150 years and with the construction that is continuing to pop up along this new transit corridor, I believe it will continue to be a hub of activity, events, growth and change.

Information on the C&S Passenger Depot came from the Larimer County Waterways website.

Dates, locations, and uses of Auntie Stone’s cabin over the years were provided in this Larimer County Waterways photo page.