Historic preservation has played a huge role in creating the Fort Collins of today, and this is no where more evident than in the Old Town Historic District. Added to the National Register of Historic Places in 1978 and listed as a local historic district in 1979, it’s a downtown that we take for granted now, but that was almost lost back in the 1970s. 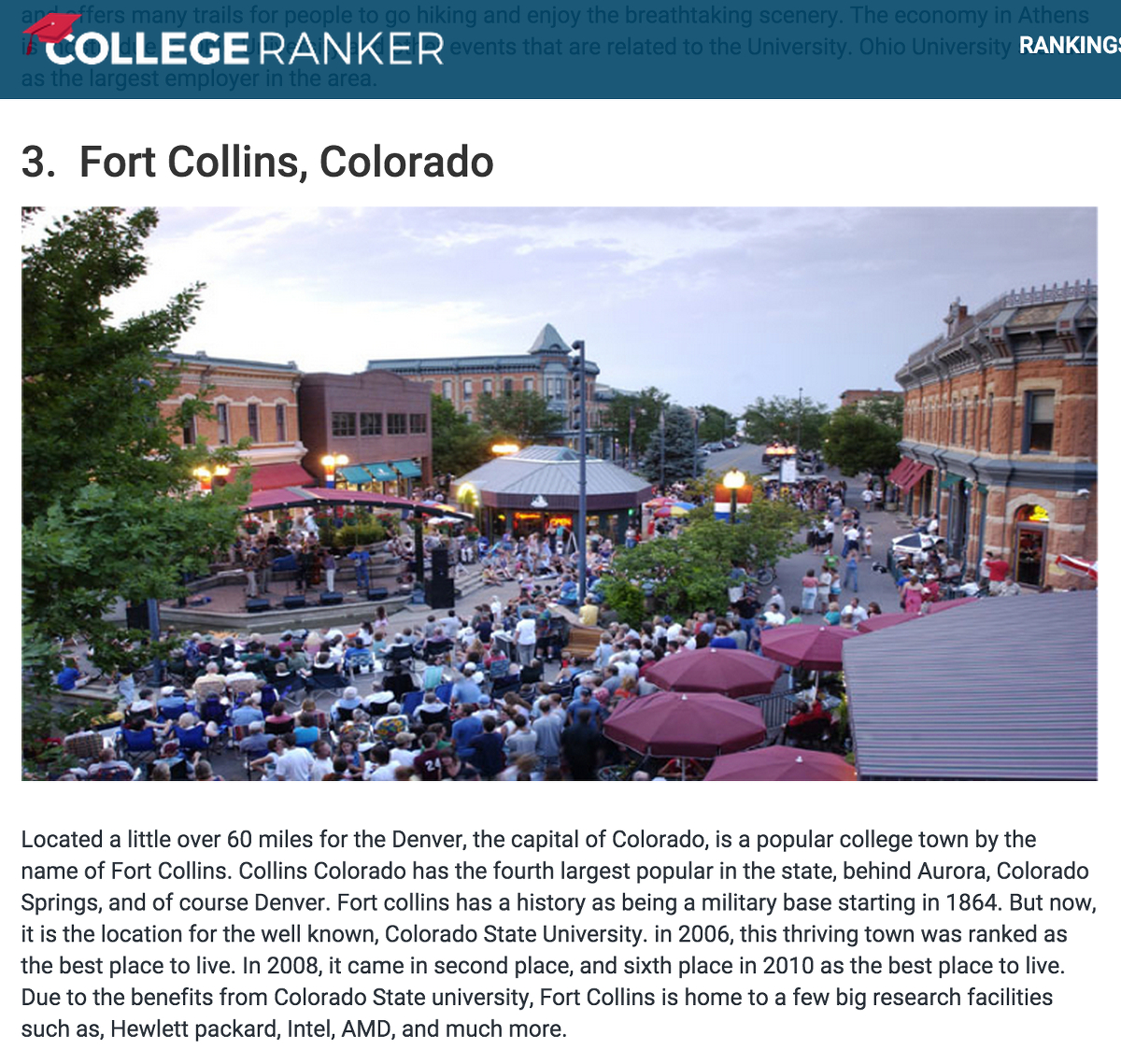 Fort Collins has made it to a lot of “Best of” lists. Almost every single one of them uses a photo of a building, or buildings, in the Old Town Historic District to represent our city. The image above (complete with typos) is from College Ranker’s “The 50 Best College Towns to Live in Forever” list in March 2015.

The dawning of the “Age of the Automobile,” made all the difference for American cities in terms of development. It was no longer important that businesses be clustered together within walking distance or around public transportation nodes. On the contrary, the new pattern of development called for spacious parking lots and building designs and signs that were noticeable and distinctive even when passing by at higher speeds. The distance between buildings was no longer of any concern. A sprawling city was far better suited to this new form of transportation than a compact one. And old fashioned downtowns posed problems for traffic flow as well as parking.

So patterns of development and design changed across the nation, and various solutions were tried for recreating downtown areas to make them better suited to the automobile age. The look of buildings needed to come up to speed. Though pedestrians had the time and perspective to appreciate intricate brickwork along a cornice line, or carefully crafted window displays, the motorist was traveling past far too quickly to even notice such details. So new buildings were designed in such a way that the building itself became an advertisement. The swoop shaped building near the corner of College and Mulberry is a great example of this. Built in 1966 by Safeway, the shape of the building became a form of branding. (Many Safeways of the ’60s were built with this same design. Other buildings from the era with immediately recognizable shapes include Pizza Hut, Wendy’s, and McDonalds.)

The Sports Authority building was originally a Safeway. It’s characteristic of Googie architecture which used the whole building as a sign to advertise the business inside. Anyone driving past would have immediately recognized the upswooped roof of a Safeway building.

For downtown buildings, this change in design that the car age demanded meant covering up wood work and brick with sheet metal and flat façades. The bigger, shinier, and more brightly colored the building, the more likely it was to catch the eye of a passing motorist. So many of our downtown buildings were redesigned with this in mind.

Walnut Street as it looked in 1981. The taller building on the left is La Luz and The Welsh Rabbit Cheese Bistro today. The shorter buildings are all part of the Silver Grill today.

Large store front windows were no longer required as no one was strolling along the street to be drawn in by them. So store fronts were built up, creating smaller windows and a bulkier façade. 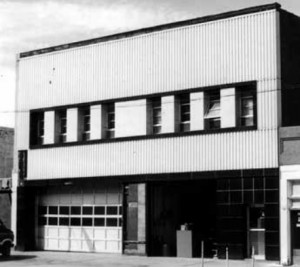 The Old Firehouse/City Hall had undergone a drastic transformation.  The bell tower had been removed from the top, windows were shifted about, and the classic arch doorways were replaced with plain garage doors. And over it all was a metal facade that hid the original brick and was bright and shiny to catch the eye of those driving past. (Large sections of the building that stands today are actually reconstructions of the original.) 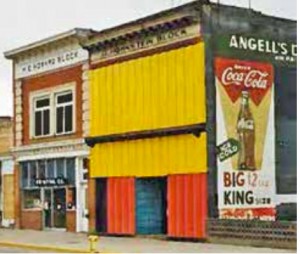 The Hohnstein block had undergone an extreme makeover by 1980 when this photo was taken. Thankfully the metal cladding has since been removed and we know this building today as Coopersmith’s Pub.

It wasn’t just the buildings that were “improved” for the Modern era. Cars took up more space than the pedestrians, horses, buggies, and bicycles that used to inhabit these downtown streets. And with every passing year there were more and more cars. Something had to be done. 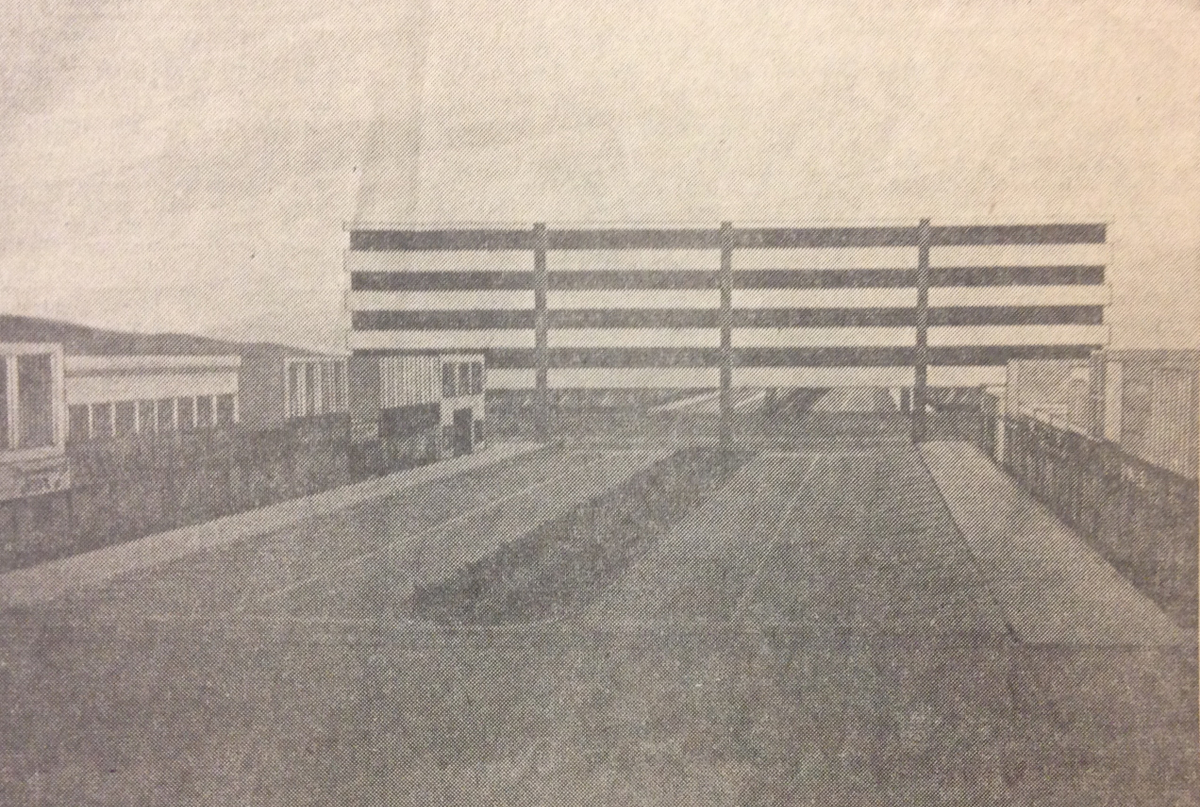 Artist rendering of a parking structure over the intersection of Colllege and Laporte. (From a Coloradoan article on file at the Fort Collins Archive.e)

The city proposed a 3 pronged approach to dealing with the issues of a struggling downtown: parking, beautification (including the creation of the Oak Street Plaza), and a Remington bypass.

The Remington Bypass involved directing motorists off of S. College at Magnolia. They would head east to Remington and then north to Walnut. The only problem was that Remington didn’t extend to Walnut. It stopped at E. Mountain. So the Hohnstein Block (where Coopermith’s is today) was to be removed, as well as the Miller Block to the north of it (where Little Bird Bakery, Science Toy Magic, and the Bondi Beach Bar are now, among other businesses), in order to make way for four lanes of traffic through that area. From Walnut, motorists would curve back to the west and join up with N. College. (Can you picture large cargo trucks making those kinds of turns in order to pass through town?) 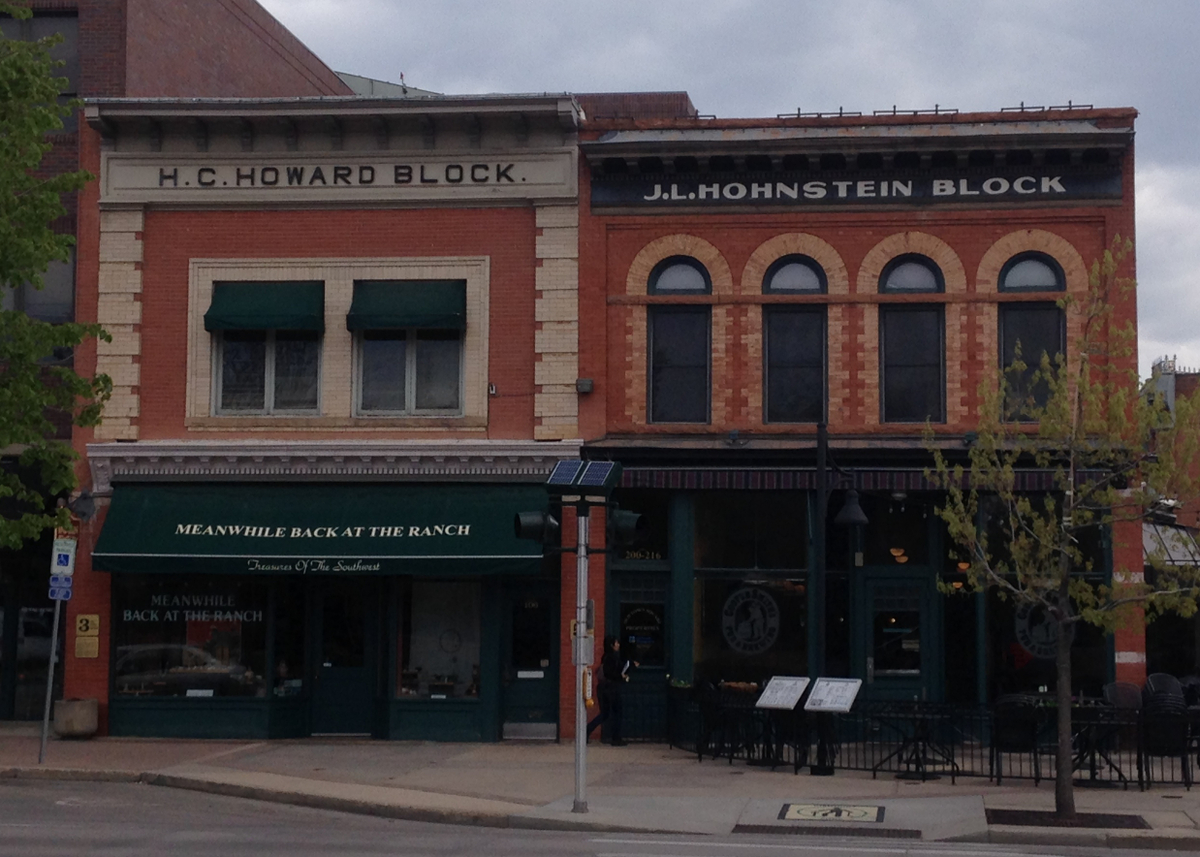 The Howard and Hohnstein Blocks on E. Mountain as seen in 2014. 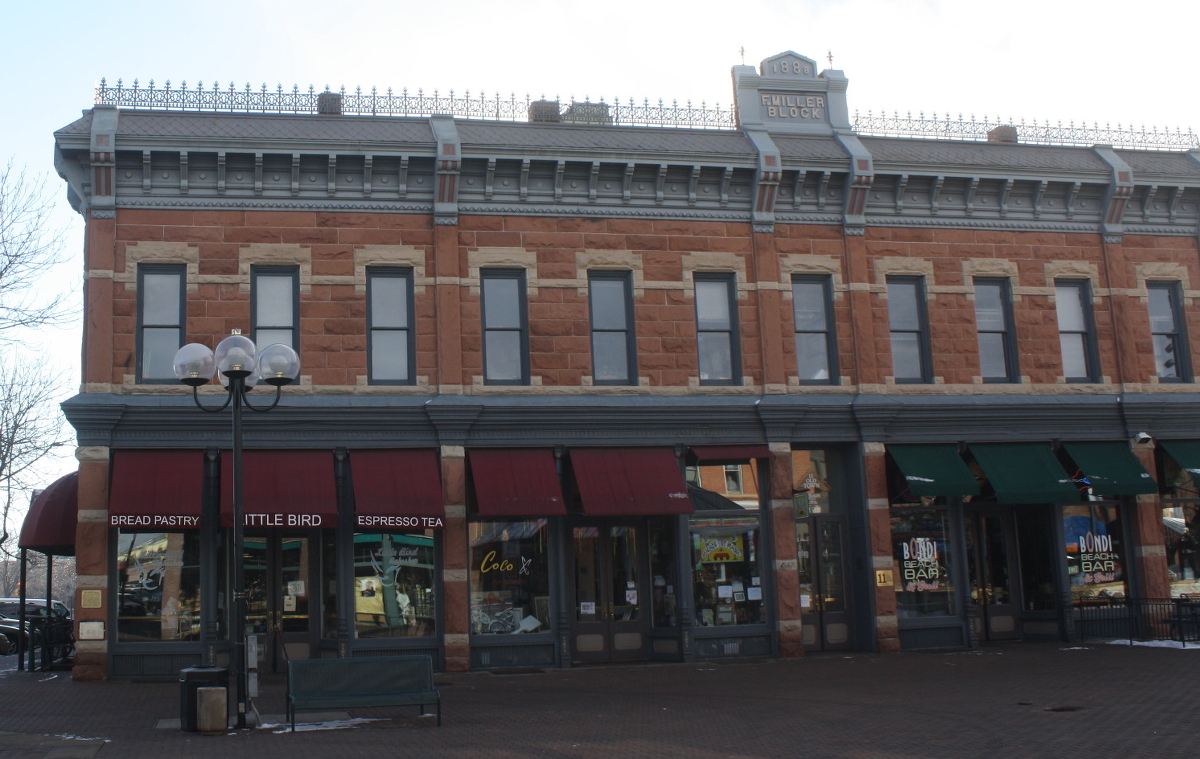 Once the Remington bypass was in place, then the plan was to beautify the section of College between Magnolia and Walnut, turning it into a “beautified parking lot,” according to Bob Ferluga, the director of the Fort Collins downtown redevelopment project. (May 5, 1976 Triangle Review)

The business owners were all for additional parking and for the beautification project, but most were adamantly opposed to the bypass. Some felt that it would route traffic away from downtown businesses by making it easy to shoot through the area without seeing the stores, restaurants and bars that they might otherwise stop at.  Others were opposed to it because it would mean the city taking their buildings through eminent domain and tearing them down. Long term residents were also aghast that the Miller Block, in particular, would be lost, as it was such an integral part of the city’s early history. 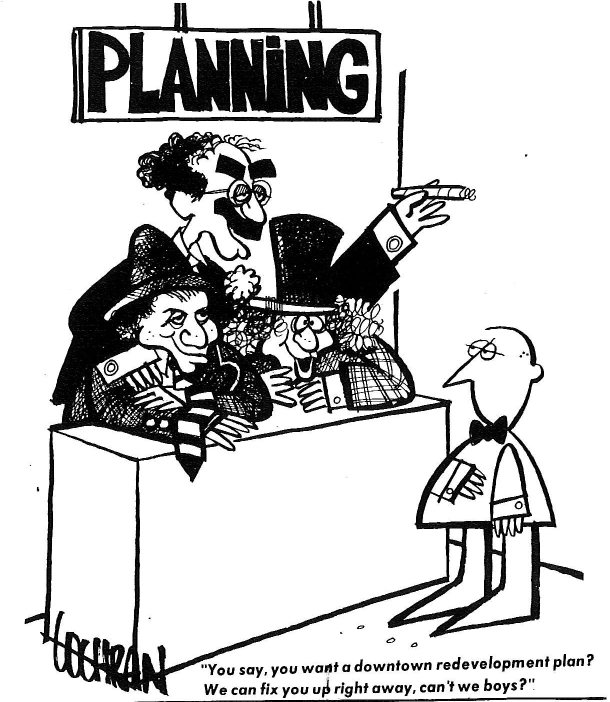 The situation became increasingly acrimonious. By the end of August, 471 businessmen and property owners had signed a petition against the bypass. Eventually a compromise was developed in which parking structures and beautification projects would proceed, but building the bypass was shelved. In November of 1976, a bond item was voted on by those who owned property in the downtown district to raise money for the parking and beautification. It passed with a narrow margin – 284 to 203. 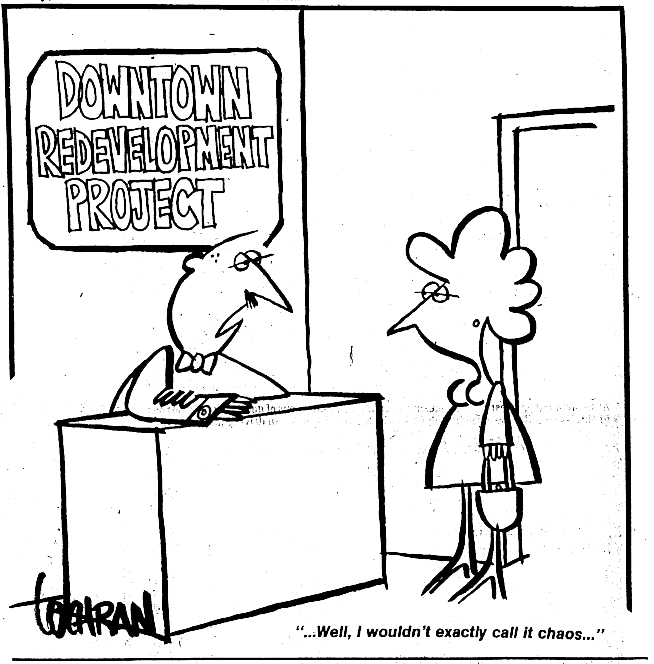 Residents were particularly confused as they were not included in the discussions regarding the downtown improvement plan, yet they felt a great connection to the area and were concerned about what was going on. (From the June 30, 1976 Triangle Review.)

Once the bloodletting (as one Triangle Review article referred to it) was over and the city was able to move forward, several concerned merchants decided that they needed to find a way to protect their downtown properties from any possible action by the city, especially if a downtown bypass was ever raised again. According to Wayne Sundberg, “In early 1977, an Ad Hoc group of citizens, working with the Chamber of Commerce, prepared and submitted a request to designate the Old Town area of Fort Collins as a National Historic Landmark District.” The request was granted in 1978. 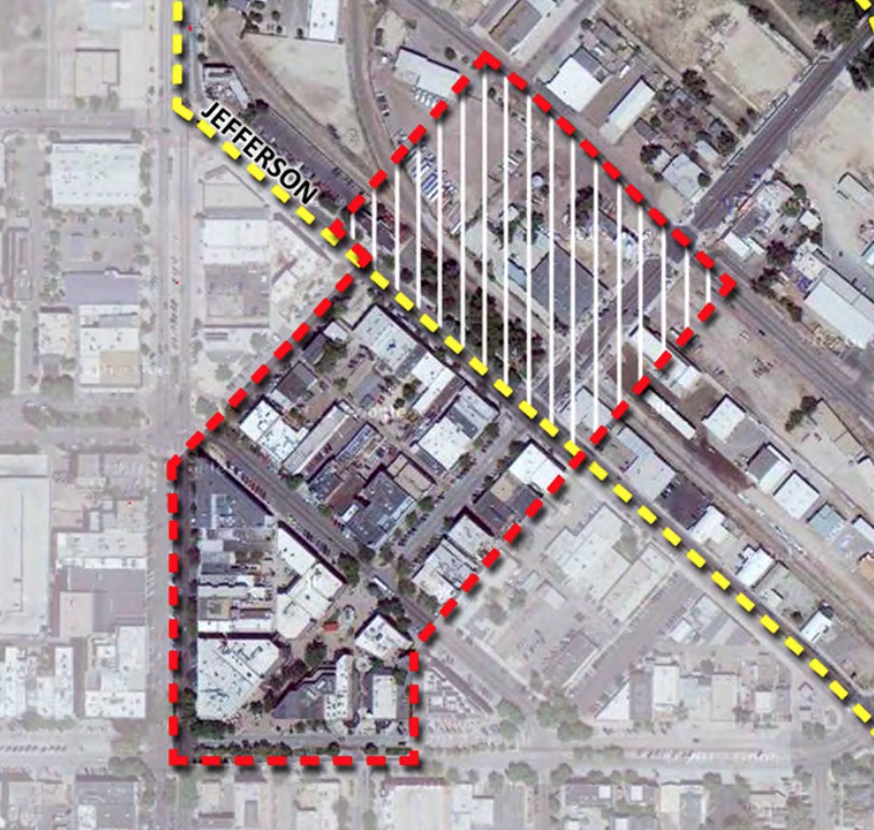 The dashed read line indicates the boundaries of the Old Town Historic District. Properties outside this boundary, unless they are individually designated (such as the Old Post Office at Oak and College) are unable to secure the same grants and tax credits that the landmarked properties can receive. (Image from the City’s Historic Preservation web page.)

Merchants that had held off on improving their properties during the previous turmoil, now felt free to perform the maintenance projects and other improvements that they had postponed. But with the creation of the historic district, the building owners also had access to grants and tax credits through state and federal preservation agencies. Though not all buildings were renovated at once, when they were, the preference was always towards preservation, rehabilitation, restoration, or reconstruction as that’s what brought in the financial resources to the owner.

The bypass never did happen, but city planners still felt that something had to be done to alleviate the congestion issues on College Avenue. So the lengths of Mason and Howes streets that ran through the downtown area were converted to one-way streets, Mason heading north and Howes heading south. (These streets were only recently changed back to two-way roads.)

Information from this article came from a phone interview with Wayne Sundberg, as well as from his manuscript entitled The Wrecking Ball of Progress: Historic Preservation Efforts in Fort Collins (August, 1977).

Old images of the Hohnstein building, the Old Firehouse, and businesses along Walnut street all came from the Fort Collins Old Town Design Standards.

The old newspaper clippings and a great deal of my understanding of what took place during this period in time came from reading through several articles in the Triangle Review from 1976, which I accessed through the Fort Collins Archive.  Although I probably picked up a lot of information just from reading through articles on microfilm, I took specific information from the following articles:

“Bloodletting in downtown should be finished,” Triangle Review, December 1, 1976.

“Marx Brothers” cartoon by Cochran from the March 31, 1976 Triangle Review.

The image of the proposed parking structure also came from the Fort Collins Archive and is located in the Miscellaneous Transportation folder.

Information on the architectural style and history of the Sports Authority building (once an old Safeway) can be found in the Architectural Inventory Form for the property at 425 S. College which was completed by Historitecture.