The History that We Tread Upon 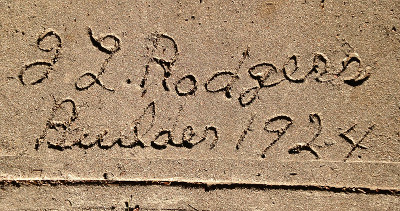 One day it dawned on me that this bit of sidewalk is respectably old.

Clues about our past can sometimes be found in the most unlikely of places. I have two dogs and every morning we walk for an hour or so around town. Sometimes, when I have a lot on my mind, I find myself walking on autopilot with my eyes on the sidewalk before me. It was on just such a walk that I noticed writing in the cement. What caught my eye was the date at the end of the writing, “1924.” It was probably something I had seen many times before, but for some reason on that day, it hit me. This is something old. I’m walking on something that’s from the time of the Roaring 20s. I’m walking on history! 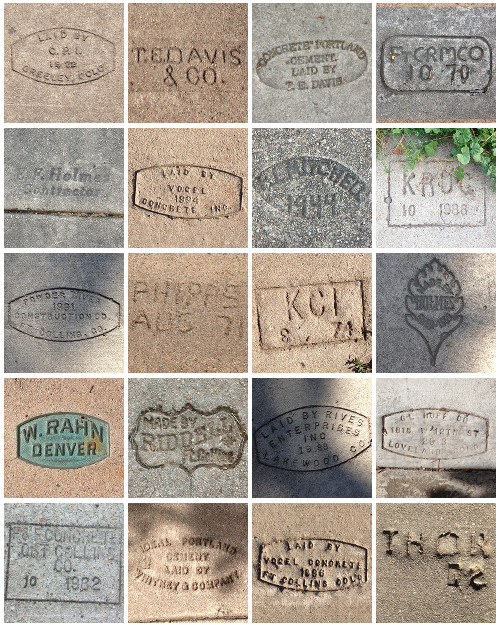 Date stamps in Old Town reach back through almost every decade until the 1920s.

That was the start of a sidewalk obsession in which I cataloged at least 27 different names stamped into the cement around Fort Collins. Many of the older stamps didn’t include a date. So I started looking through old city directories trying to get a sense of what time period each sidewalk stamp came from. It’s a project that I’ve worked on for a year now, and from which I could probably pull innumerable posts. I suspect that by the end of the series, you’d all be yelling, “Oi vey! Enough about sidewalks already! You have dazzled us all with your extensive knowledge of sidewalk history. Now can we please get back to normal things like old churches and stage lines and trains and things?”

So, for the sake of you, the reader, I submit this one little divergence upon the history that we can glean thanks to a bit of writing in cement. And I’ll leave all of the other posts for some far future day, when we’ve all forgotten about how cool sidewalks can be and we need a little refresher. 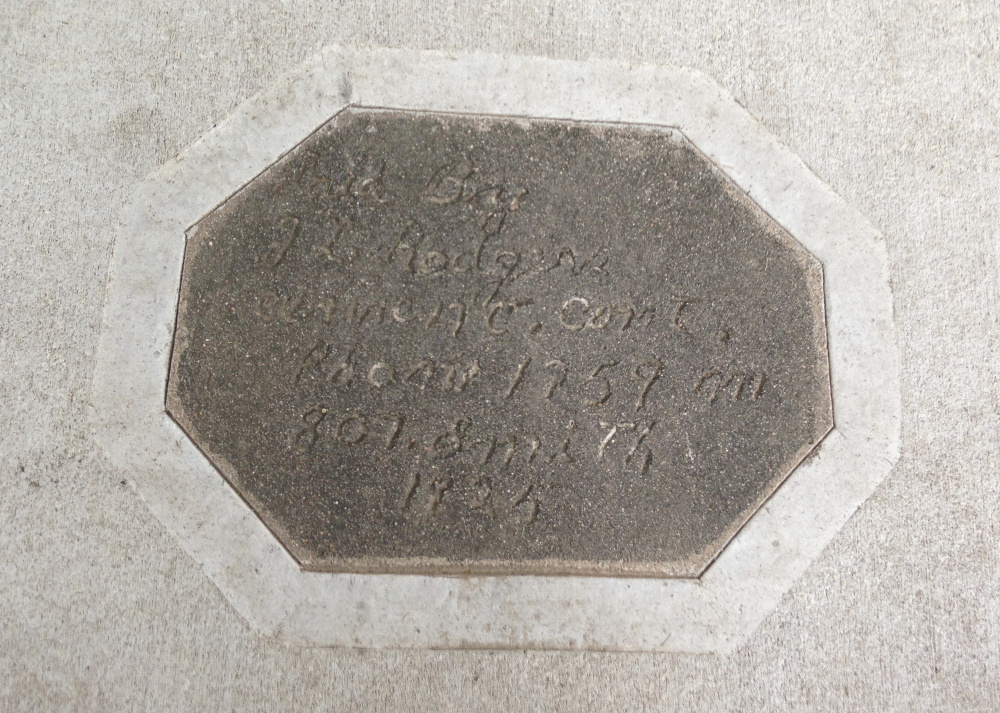 An older section of cement was saved when the sidewalk was re-poured. To see this bit of slab, head to City Park and check out the southeast corner of Oak and Jackson.

There is only one early cement contractor that included a date when he left his mark in the cement he poured. That was James Leonard Rodgers. There were other men pouring sidewalks at the time, but including a date didn’t seem to be in vogue. The only sidewalks that Rodgers poured in Fort Collins were all from the 1920s. It wasn’t until 1944 that another person would think to include a date. And it wasn’t until the late 60s and early 70s that including a date became de rigour.

So I did a little digging on this J. L. Rodgers fellow. He seemed like a nice enough guy. I liked how he looped his “L”s and how he included his home address – 807 Smith – in case you needed to get ahold of him. 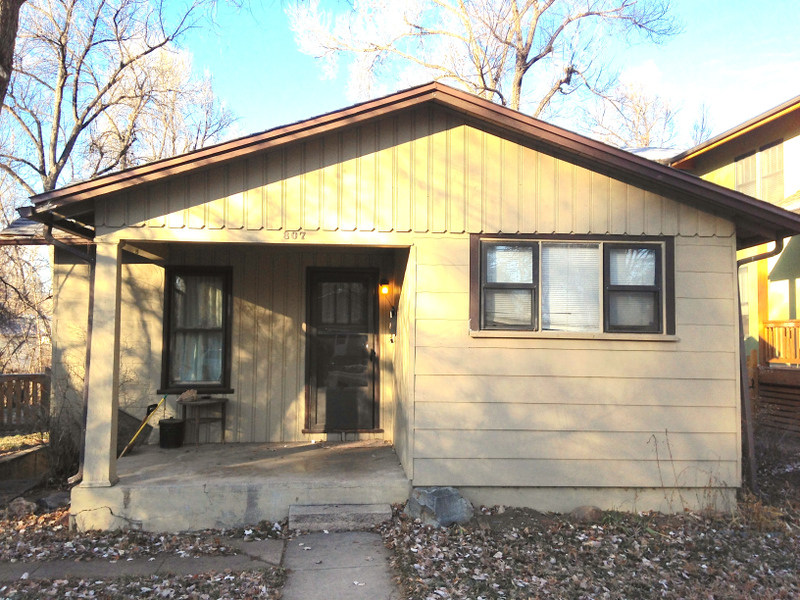 But the deeper I dug, the more interesting this fellow became. I started to realize that perhaps he wasn’t as nice as his loopy “L”s might imply.

First I looked him up on Ancestry.com. There I found out that his dad, back in the mid 1800s, had been a bit of a character. During the Victorian Era, when divorce was a cultural taboo, William B. Rodgers married, and later divorced, Emily Smith. He then married Mary Shanks. Mary passed away and William married Elizabeth Beavers. And when he was buried, he wasn’t listed as Elizabeth’s husband, but as her consort. Which does leave one to wondering a bit about the nature of their relationship. 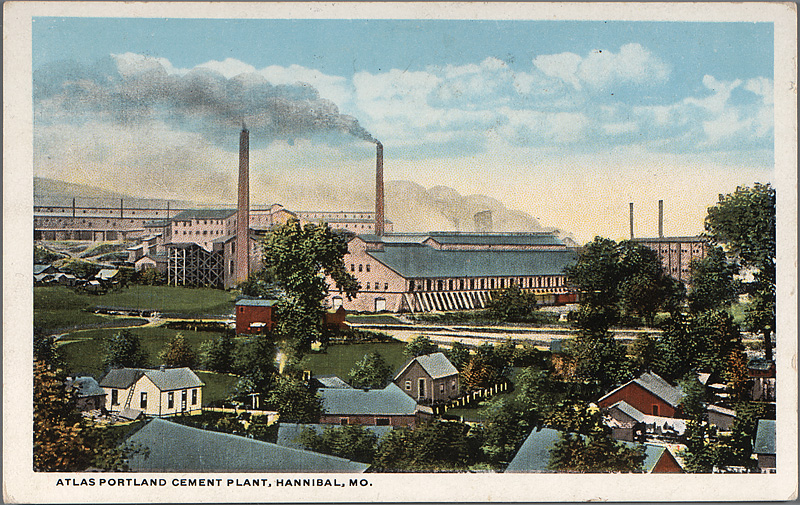 Atlas Portland Cement Company in Hannibal, Missouri in the 1920s.

James seemed to follow a bit in his father’s footsteps. Born in Illinois, he married a gal named Hattie in 1892 and together they had four children. They moved from Kinderhook, Illinois to Hull, Illinois. And then from there to Hannibal, Missouri, where J. Leonard (as he was called in that place) worked in the Portland cement factory.

I happened upon mention of J. L. in a book entitled, City of Dust: A Cement Company Town in the Land of Tom Sawyer (Missouri), by Gregg Andrews, where Gregg mentioned that J. Leonard, as foreman at the Ilasco plant, took advantage of his position by selling accident insurance to poor immigrant workers. As their boss, how could they say no? And Leonard felt no shame in using their fear of on-the-job accidents as an incentive to line his own pockets through his side job with the Chicago Insurance Company.

As might be expected, J. L. disappeared abruptly from that job, but he left Hattie behind. Instead he moved to St. Louis with a gal named Lulu. According to Gregg Andrews, J. L. broke the news to the mother of his four children by leaving a note at the house for her before he took off with his new girlfriend. Hattie struggled for several years. Unable to care for her children, she put two up at the Home for the Friendless. Three years later she was able to get a job as a washerwoman and support her children. J. L, on the other hand, left behind piles of bills and rumors of infidelities. Things must not have gotten much better in St. Louis because he lived there for less than a decade before moving to Fort Collins. Together James and Lulu had an additional five kids. 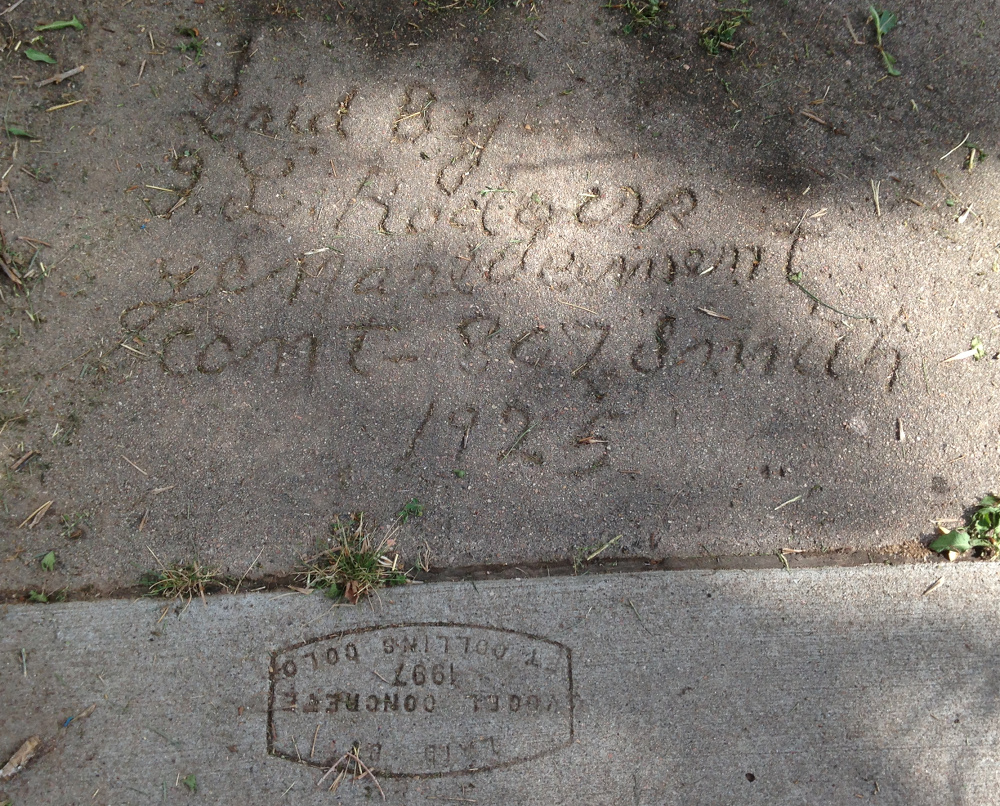 Can a leopard change his spots? Not this leopard. Rodgers must have continued his wanton ways because he didn’t last long in Fort Collins either. The first slab of dated cement that I could find was from 1924 and the last was from 1927. Census records indicate that he and Lulu moved to Cheyenne where there are hints that they likely got divorced. (Or at least separated. I don’t get the impression that Rodgers got a proper divorce from Hattie, which makes me think he might never have actually married Lulu, despite the fact that the census records list them as husband and wife.) 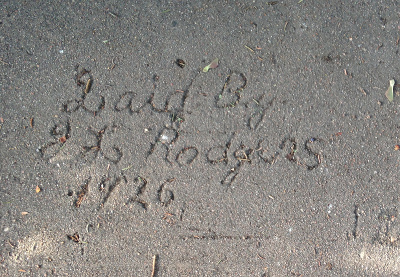 James Leonard Rodgers took out a permit to build his house at 807 Smith Street in 1923 (from what I can tell, at least). And his last remaining poured sidewalk is dated 1927. So it’s quite possible that he and Lulu were only in town for 5 years. This man wasn’t a pioneer, nor a native, nor a founding father. Instead he was a bit of a scoundrel and a womanizer. And yet he was the only cement layer at the time that thought to include the year in the information that he wrote by hand in his cement work. And because of that, this rascal has gained the honor in our little town of being one of the earliest sidewalk cement pourers. 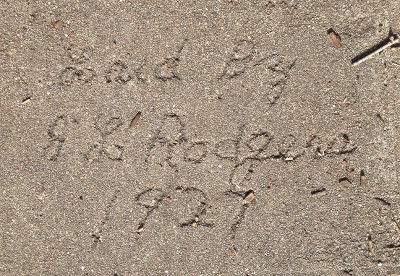 So the next time you’re walking through Old Town, Fort Collins, I encourage you to not only enjoy all of the beautiful old houses that are Fort Collins’ treasures, but also to glance down at the sidewalk once in awhile and enjoy the wonderful little snippets of history that are right there under your feet.

Edits for this article:

Pat Tvede checked the building permit book again and it looks like J. L.’s building permit was pulled on November 16, 1921. Which means that J. L. was in Fort Collins for at least 7 years (which matches his modus operandi a little better from previous places where he’s lived).

The photo of the Atlas Portland Cement Company is from the Hannibal Free Public Library‘s African American Community of Northeast Missouri project online.

Gregg Andrew’s book and additional information by email were a great help to me. Thanks, Gregg! Here’s a link to his book on Amazon in case you’d like to find out more: City of Dust: A Cement Company Town in the Land of Tom Sawyer (Missouri).

Information about when J. L. Rodgers took out a building permit is thanks to Pat Tvede, a fellow Landmark Preservation Commission member and a diligent volunteer at the city Archive where she reads incredibly scrawly old handwriting and deciphers some bit of meaning out of the mess that inky cursive can sometimes be. She has been transcribing building permits and she sent me a copy of what she had dug up from the 1920s.

All sidewalk photos were taken by me during morning walks. It drives my dogs nuts every time I stop to take photos. And the neighbors probably all wonder what in the world I’m doing pointing my camera at the ground. But I suspect that I now have the most comprehensive sidewalk photo library in all of Fort Collins. … and I guess that’s something. Right?