“In a dream [Jacob] saw a ladder that reached from earth to heaven, and God’s angels were going up and down on it.” – Genesis 28:12

Al Birch was a reporter from the Denver Post when he first visited Estes Park. At the time, there wasn’t much there besides some cabins, a few ranch properties, and the Elkhorn lodge. Birch fell in love with the wildness and beauty of the place and decided to buy a plot of land on which to build a summer home.

It was 1904 when Birch hired Carl Piltz, a local stonemason, to construct a one-story house on the edge of a hill with a wraparound porch embracing the western half of the summer home. When completed, the stone bungalow offered breathtaking views of Longs Peak and the Continental Divide as well as the town below. 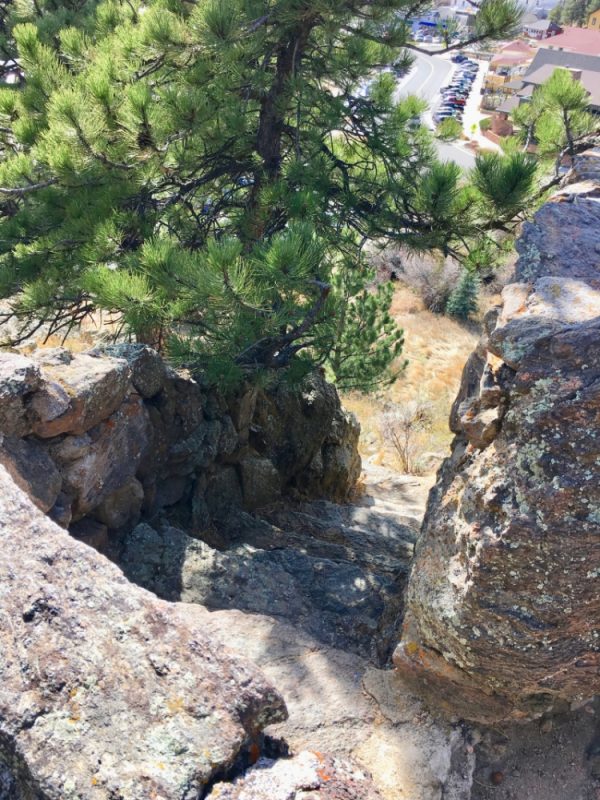 Today, visitors are discouraged from using the staircase to the ruins as one wrong step could lead to quite a tumble.

In order to reach the house, stone steps were built from the valley to the house that took the climber on a 75 foot vertical ascent. The steps were so steep, in fact, that Birch’s summer home was nicknamed “Jacob’s Ladder” after a passage in the Bible in which Jacob had a dream about a staircase that lead from heaven to earth.

In 1905, the Estes Park Town Company was formed with the intention of creating a small community in the valley. Abner Sprague was hired in 1906 to survey and plat the area. A furious building boom ensued in which lots were snapped up for $50 each and wood structures were quickly erected. Since at least the 1870s, the valley had been host to a variety of tourists, and now with an official town site laid out, store keepers would finally be able to take advantage of the ever growing tourist trade.

By 1907, with more and more to do in the valley below him, Al Birch must have gotten tired of ascending and descending the steep staircase to his house. In fact, in the dead of night, after a few drinks, it was probably downright dangerous. So he decided to sell the property. J. R. Young was interested, and purchased the house with some surrounding land in the late fall or early winter of 1907.

The fateful fireplace in the Birch ruins.

On December 21st, 1907, in the bitter cold of night, the roaring fire that was heating the house jumped from the fireplace and laid hold of the wood beams and floor boards. The heat was so intense that it even warped some of the metal supports over the window openings.

Though early newspapers didn’t lay blame, later historians have attributed the fire to faulty construction. However, Al Birch had used the fireplace with no problems for at least two years, and Carl Piltz, who had constructed the house, remained in high regard even following the fire. In fact, the Longmont Ledger on October 16, 1908 stated that Piltz had just completed laying the foundation for “Stanley’s casino.” The author concluded saying that, “Carl is hard to beat at this business, and you will find he is always busy.” If anyone at the time had suspected Piltz was to blame for the Jacob’s Ladder fire, it’s doubtful he would have been in such high demand. 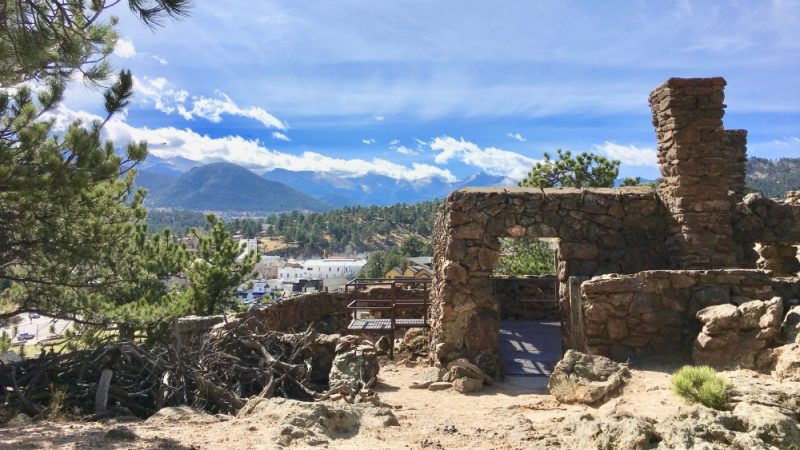 Ruins with a view.

As you can imagine, J. R. Young was pretty upset that his new vacation property was now a ruin. The June 25, 1908 Mountaineer says that Young and another man by the name of John McAbe met with Al Birch to discuss a settlement. They clearly didn’t know who they were dealing with.

CLOSING THE DEAL
A. G. Birch, in company with J. R. Young and John W. McAbe, of Washington, D. C., went to Denver Monday to straighten up the business connected with the sale of Jacob’s Ladder. Mr. Birch sold the place to Mr. Young shortly before the fire which destroyed it, and as there was no insurance on the building, there has been a little friction about closing the deal. Mr. Birch returned Tuesday, and his smiling face is again behind the desk at the Manford.

Though the Mountaineer wasn’t clear on why Birch was smiling, a couple of other newspapers round out the scene. According to the July 8, 1908 Fort Collins Weekly Courier, Young sold the property back to Birch for $1. And the July 3, 1908 Longmont Ledger stated:

Mr. Birch, whose house was burned down last winter after he sold it, has a judgement against the buyer and received his place back and $7000.

When Al Birch had sold Jacob’s Ladder to Young, he’d retained a section on land in the valley where he had designs upon building another vacation home — one without any steps to climb between town and his front door. He began to build in January 1908, just a few weeks after the fire had claimed his old residence. The Longmont Ledger (September 18, 1908) called it “a nice little log house on his land in the east part of the city.” 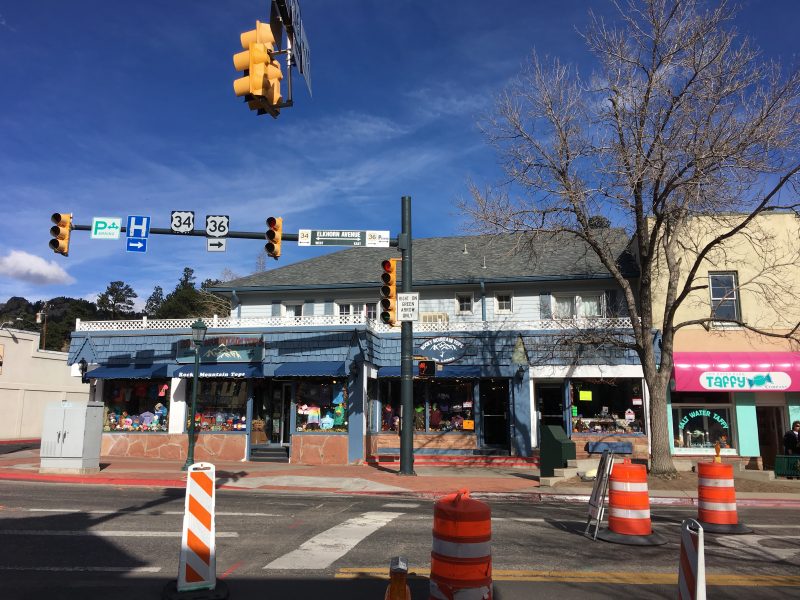 The old Manford Hotel can still be seen above the updated storefronts.

While constructing the new building, Birch stayed in the Manford hotel, located on the northeast corner of Big Horn Drive and Elkhorn Avenue. The building still remains today, though it has been greatly altered with the addition of a commercial storefront on the first floor.

The July 2, 1908 Mountaineer concluded the story of the old stone house by saying:

A. G. Birch is still owner of “Jacob’s Ladder.” In the settlement with J. B. Young, who was to acquire the property, Mr. Birch retains possession of the place and received a satisfactory sum in cash in addition. It is probable that the ruins left by the fire will remain in their present picturesque state for some time to come, as Mr. Birch does not intend to build there again for the present.

Little could the author have realized that “some time to come” would last for a century and more. In 2001, both the ruins of the old stone house and the newer log cabin that Birch built downhill were added to the Colorado Register of Historic Places. 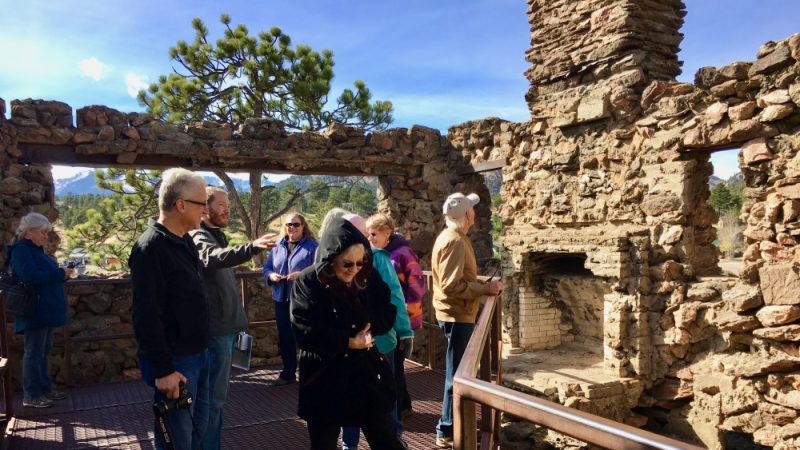 Historic Larimer County hosted a tour of historic Estes Park in October of 2017 which included a visit to the Birch ruins.

The ruins are now a part of the Knoll-Willows Open Space and are open to the public. So the next time you find yourself in Estes Park with a little time on your hands, consider wandering on over to the Birch ruins to take in the view.

Additional Sources for this Article:

The 1904 date for the beginning of construction on Jacob’s Ladder came from the Colorado Historical Society document entitled, “Rustic Style Architectur in the Colorado State Register of Historic Properties,” published in 2007.

I used Colorado Historic Newspapers quite extensively in researching this story. Every reference above to a newspaper article was found through this resource.