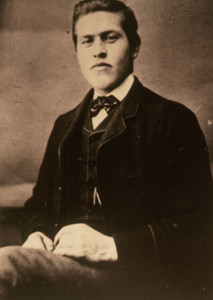 In 1887, a young Scottish fellow by the name of James Ross got the opportunity to travel to America. He had been asked to care for a shipment of Percheron horses that were being sent to Jessie Harris in the small community of Fort Collins. He was so sick during the ocean voyage that he swore he’d never make that journey again, so he stayed in Fort Collins and worked for Harris. He also hauled stones from the Stout quarry. But eventually he decided to take advantage of the Homestead Act.

It’s of interest to note that you didn’t have to be an American citizen to make a Homestead claim. The government was handing out free land to citizens or anyone who intending to eventually become a citizen. The process and fees were the same for all. 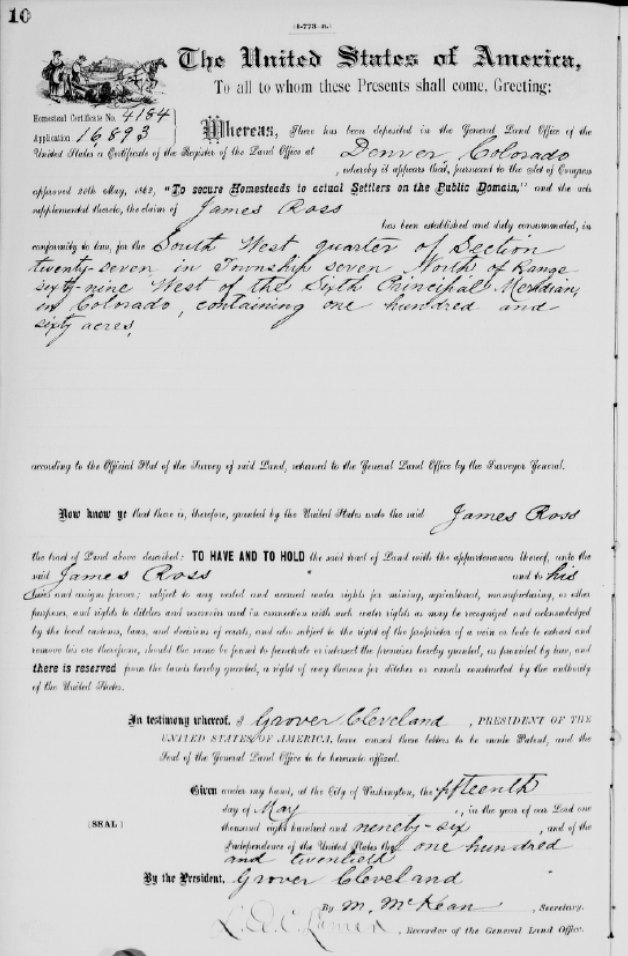 The purpose of the Homestead Act was to “secure Homesteads to actual Settlers on the Public Domain.” James Ross was the “actual Settler” in this instance.

In 1890, James and his new wife, Jane, filed a claim for a plot of land southwest of Fort Collins. In order to obtain land through the Homestead Act, the Rosses had to live on and cultivate the land for a period of five years. At the end of that five years, they’d only have to pay a small filing fee and the land would be theirs.

Because of the tremendous amount of work that was necessary to put the land under cultivation, families often built a small, simple structure to live in until a point when they could spend more time and resources on building a larger house. This small building (Today we’d likely call it a shack.) was referred to as the “proving up” house because it was a step in proving up for the land. 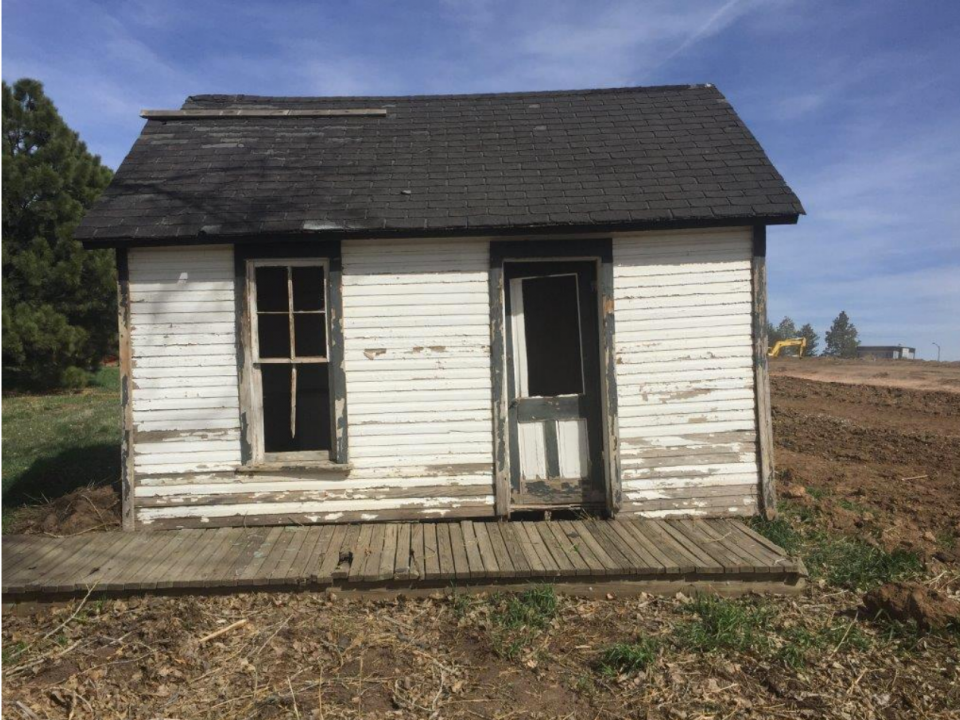 The Ross proving-up house in 2016 in a temporary location. The chimney is missing in this photo.
(Photo from the Fort Collins Historical Preservation Department.)

James and Jane had six children, probably three of whom were born in the proving-up house. One passed away at the age of 2 in a drowning accident. The parents and three children occupied the small house until 1898 when the family was able to build a larger, brick house in front of the proving-up house.

The brick house that the Ross family built is shown here with the smaller proving-up house behind.
(Image from the Landmark Preservation Commission agenda of March 15, 2017.)

The property remained in the family for 87 years at 1600 W. Horsetooth Road. Gradually the city grew out towards it and eventually the land was annexed into Fort Collins. The proving-up house was still on the lot until 2005 when the Plantation Manor development was built. At that time, the little house was donated to the City and moved to a plot of land along Timberline road where it sat for just over a decade. Then a new recycling center was built on the site and it was time for the house, once again, to move. 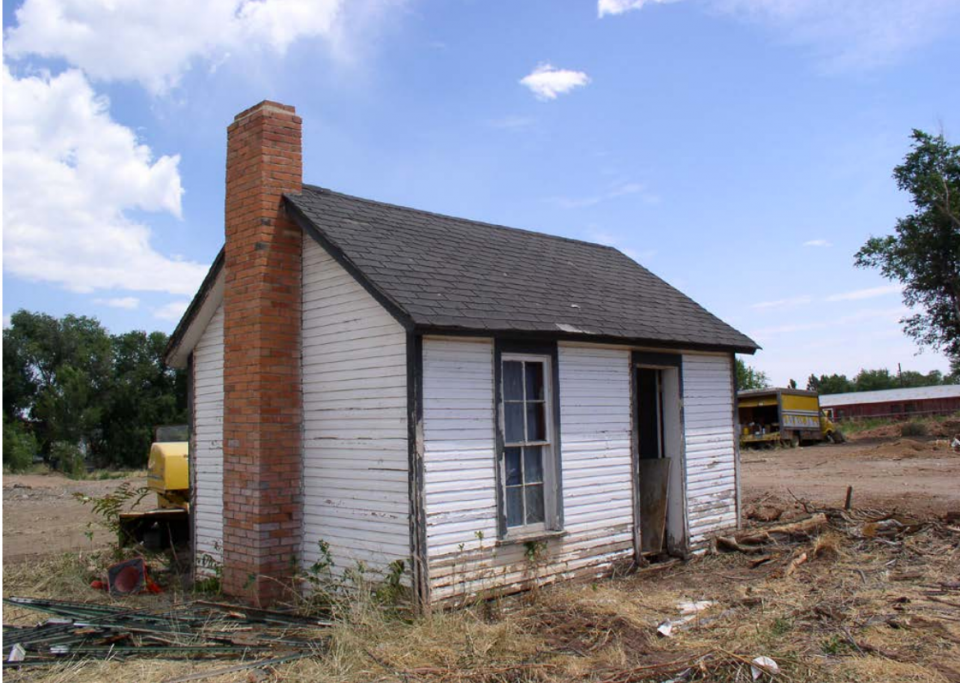 The Jane and James Ross proving up house as it looked in 2005
when it stood on a temporary location near Timberline Road.

The proving-up house is now located at the Farm at Martinez Park. There it will be restored and put on display as a means for residents to learn more about our early history and agricultural roots. 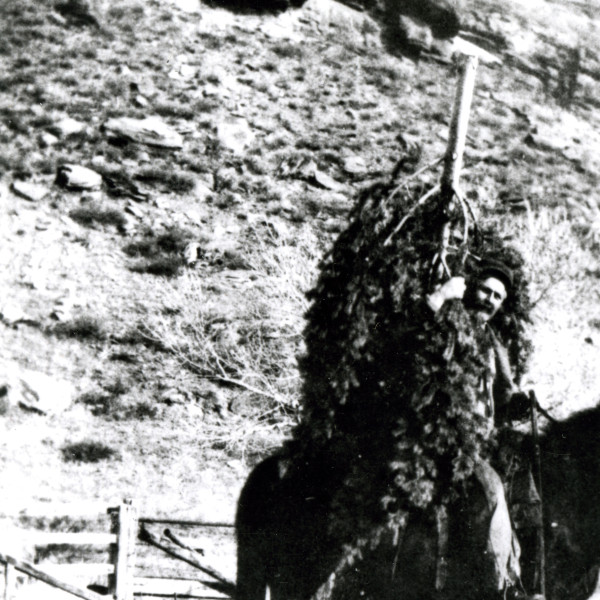 James Ross hauled a Christmas Tree down from the mountains around 1913.
This couldn’t have been comfortable. (Image from the Fort Collins Archive #H10940.)

James and Jane’s children were James (1889), George (1891), Ethel (1893), Nellie (1896), William (1899), and Leona (1906). Nellie became the grandmother of Wayne Allard, former Colorado Senator, U.S. Senator, and U.S. Representative. William was the president of Colorado State College (University of Northern Colorado) from 1948 – 1964. He created a Special Education program while he was president as well as a Nursing program. Ross Hall was named after him. 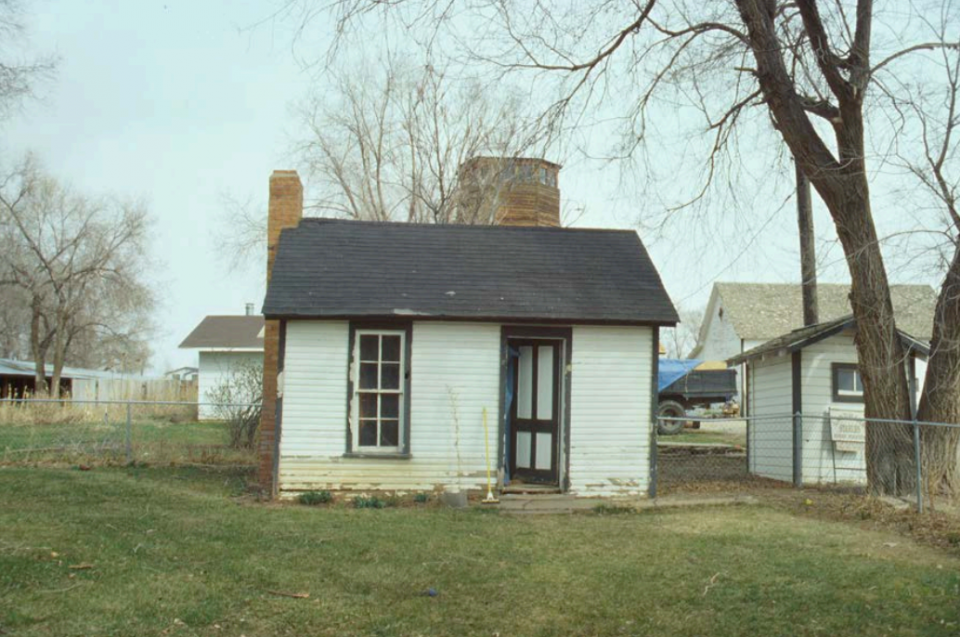 The Ross Proving-Up House isn’t currently open to the public. Once the house it landmarked by City Council (hopefully some time in June), then the City may pursue a grant to rehabilitate the building and to add some interpretive signage. It will eventually be a wonderful educational resource for our school children and the larger community.

All information and photos (unless otherwise noted) came from the Landmark Preservation Commission agenda from March 15, 2017. The report was written by Cassandra Bumgarner, Historic Preservation Planner for the City.