It’s Homecoming Week at Poudre High School, but this year it’s a very special homecoming. It was 50 years ago that the school first got its start, the second high school in the city.

That was a big deal. Fort Collins had been very progressive when, in 1889, the school board announced that a four year program would be introduced on an experimental basis to provide students with a high school education. In 1891, the first 5 students graduated from the Fort Collins High School. For the next 75 years, we were a one high school town. So no matter which part of the city or surrounding farmland you hailed from, rich or poor, immigrant or native born, everyone converged in their teens years under one roof and one unified identity — as Fort Collins High School students (eventually becoming the Lambkins in 1917, long before the Agricultural College chose Cam the Ram to be their mascot).

But by 1961, despite additions to the high school building, the classrooms were bursting at the seams and another school was needed. The cornerstone was laid for a new school in 1963, and in 1964, the school opened its doors, not only to students who would have otherwise been attending Fort Collins High School, but due to the consolidation of school districts, students from Wellington, Waverly, and Laporte also attended the new school. 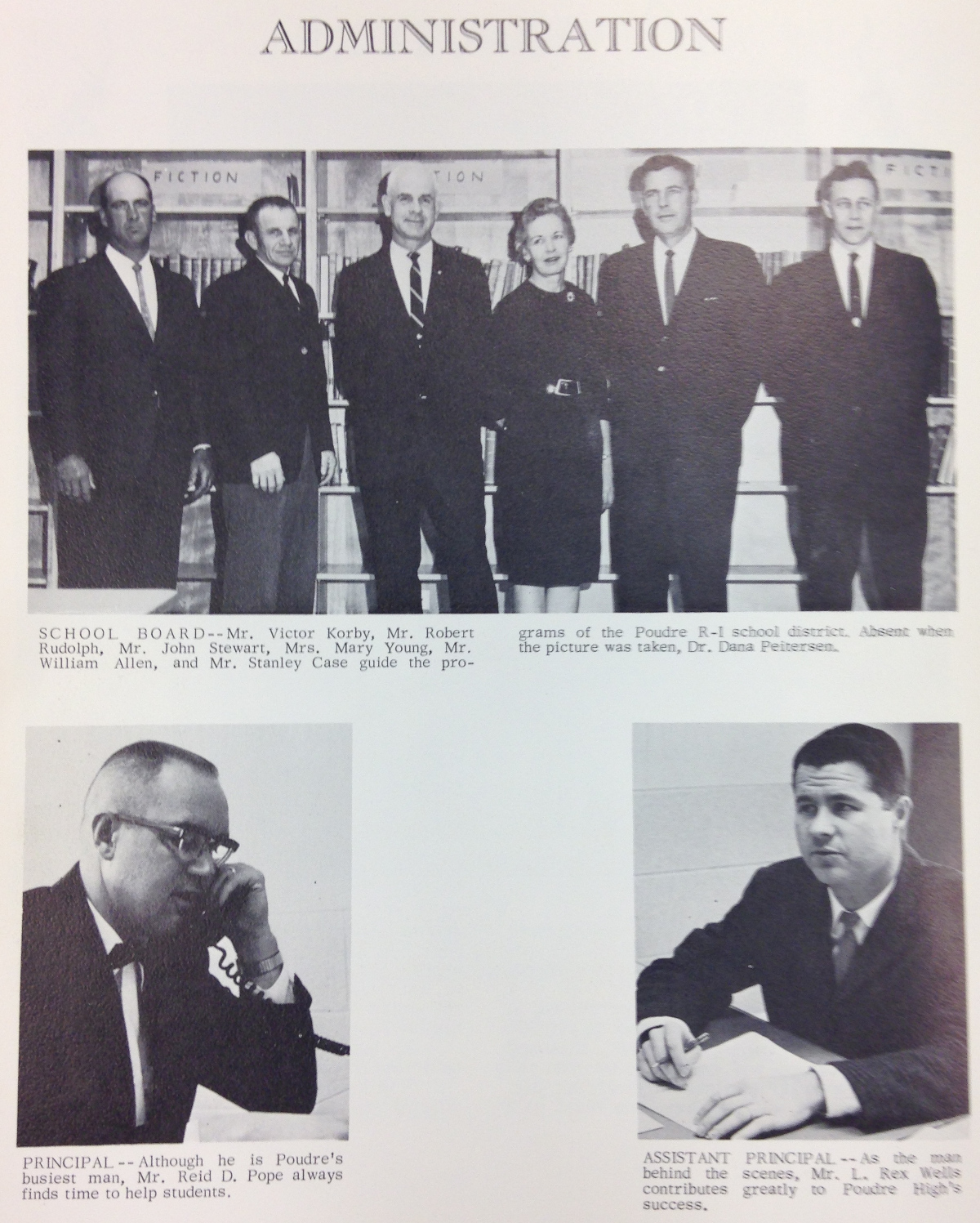 The Poudre High School Administration for the 1964-65 school year. The inclusion of the school board is a reflection of the hands on nature of the board at the time.

The students decided upon the Impala as a mascot after looking through a National Geographic magazine. Just as the Fort Collins High School Lambkins are the only Lambkins in the country, so too the Poudre High School Impalas are the only Impalas in the United States. 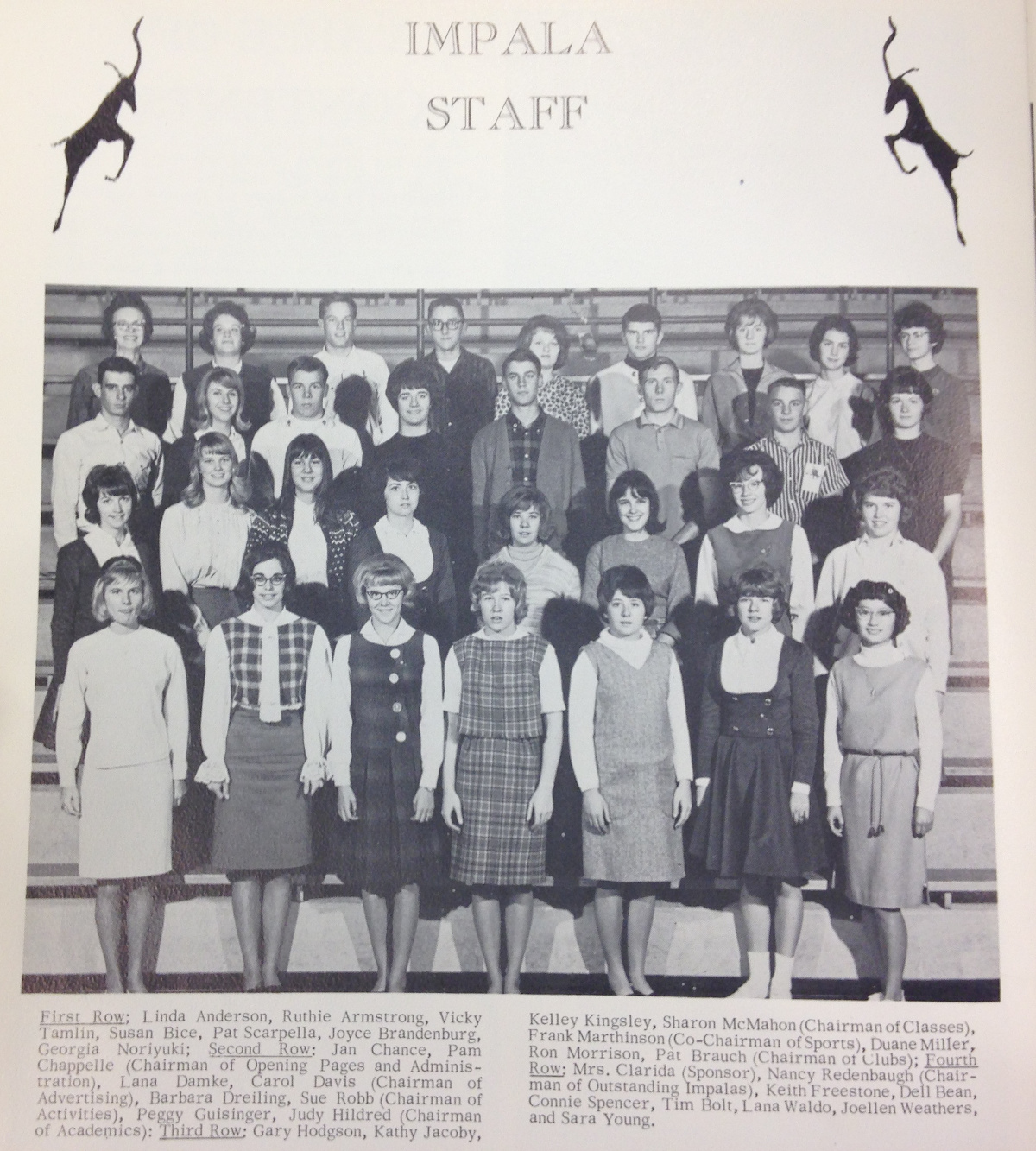 The staff that first year look almost as young as the students!

The high school has grown and changed over the years. The difference between the 1965 yearbook and the 2014 is striking and in many ways reflects the changing culture in Fort Collins. And yet, as I flipped through the pages of the earliest Poudre yearbook and the most recent, I kept thinking to myself, “The more things change, the more they stay the same.” Despite the difference in black & white vs. color, format, and themes, the yearbooks still held several similarities. 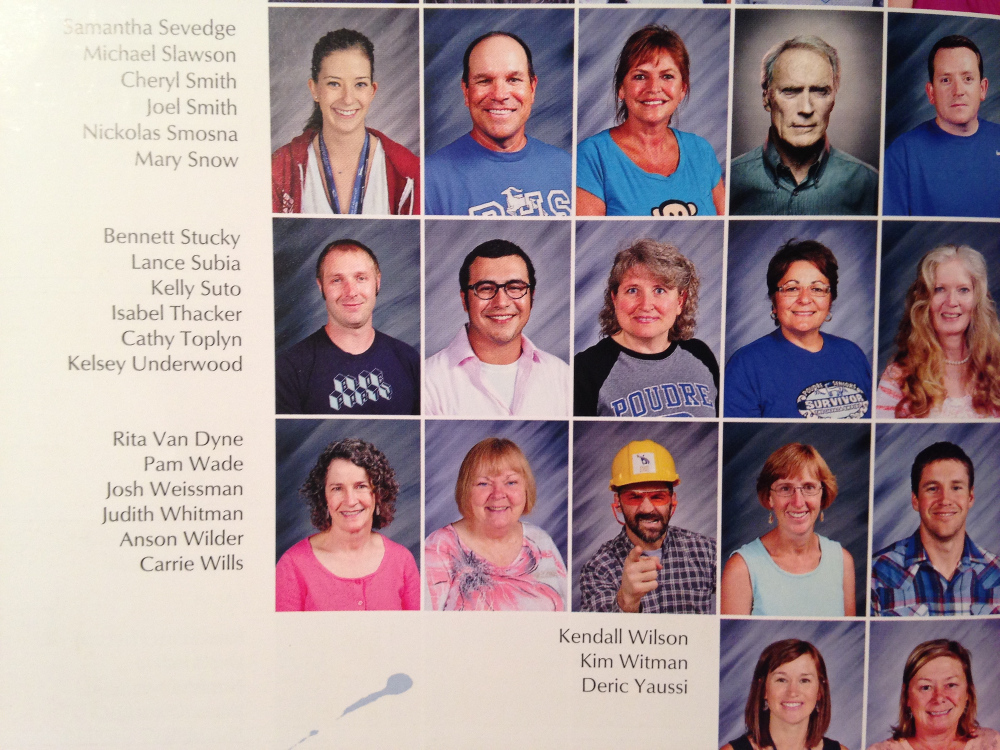 A couple of teachers had a little fun with their yearbook photos in 2014.

Many students at Poudre in the 60s were from farm families and planned to continue in farming when they graduated. Poudre continues to educate future farmers, even if the club itself is no longer a part of Poudre activities. 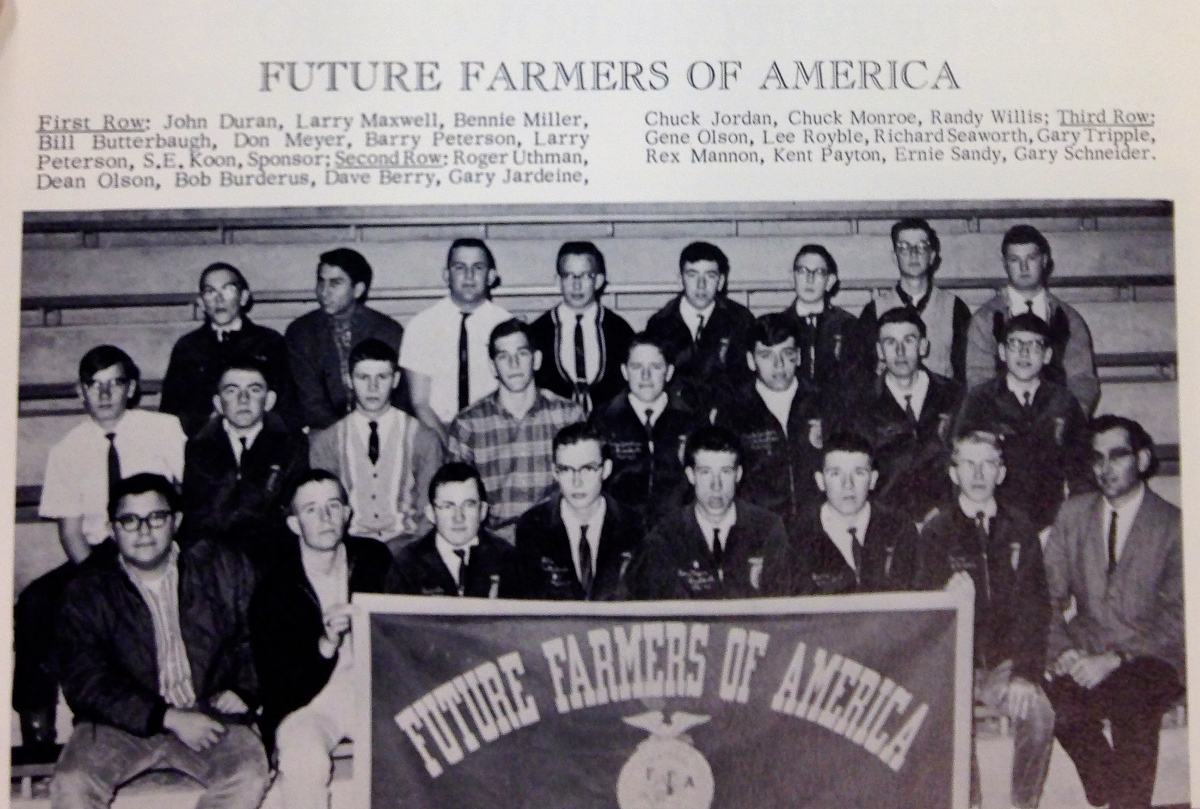 Future Farmers of America in 1965.

Poudre is in the process of creating a new agricultural program that will tie in with their current Entrepreneurial Academy, making agriculture more than just a club event, but an integral part of the curriculum for those that hope to follow agricultural pursuits post graduation.

Along with that, they’re bringing back FFA. New officers were just elected this week. The group will focus on developing leadership, personal growth, and career success through pathways in agriculture. Given the growing farm-to-table movement, this educational focus could help many students get good jobs right out of high school. And for those that want to study agriculture at a college level, these Poudre students will already have a leg up. 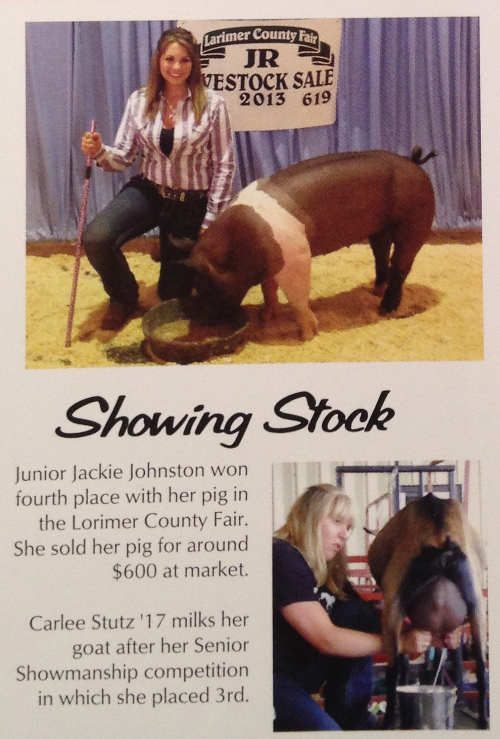 Students at Poudre today are still involved in hands on agricultural pursuits as shown in this inset in the 2014 yearbook.

Activities such as cooking are no longer seen as only for the home. At Poudre High School today there is a catering class in which students frequently get real world experience making and serving food at social events around town. 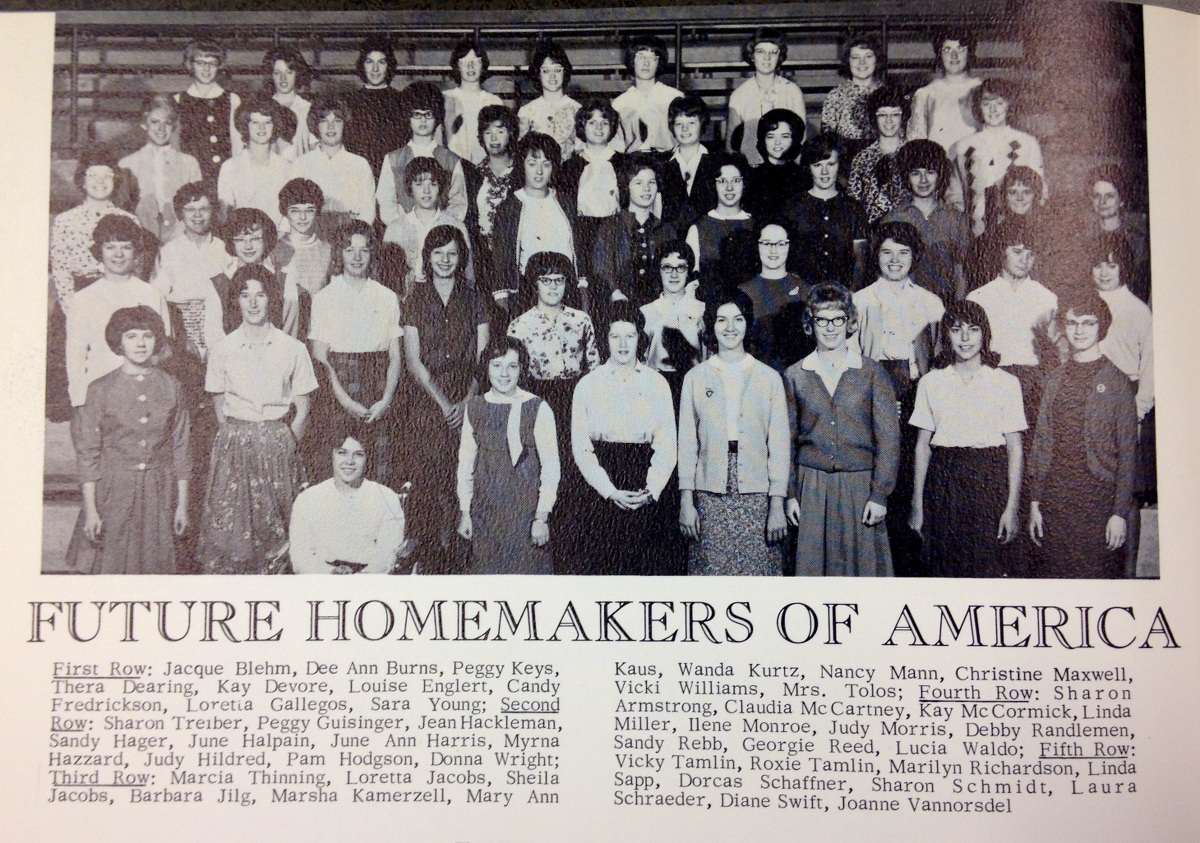 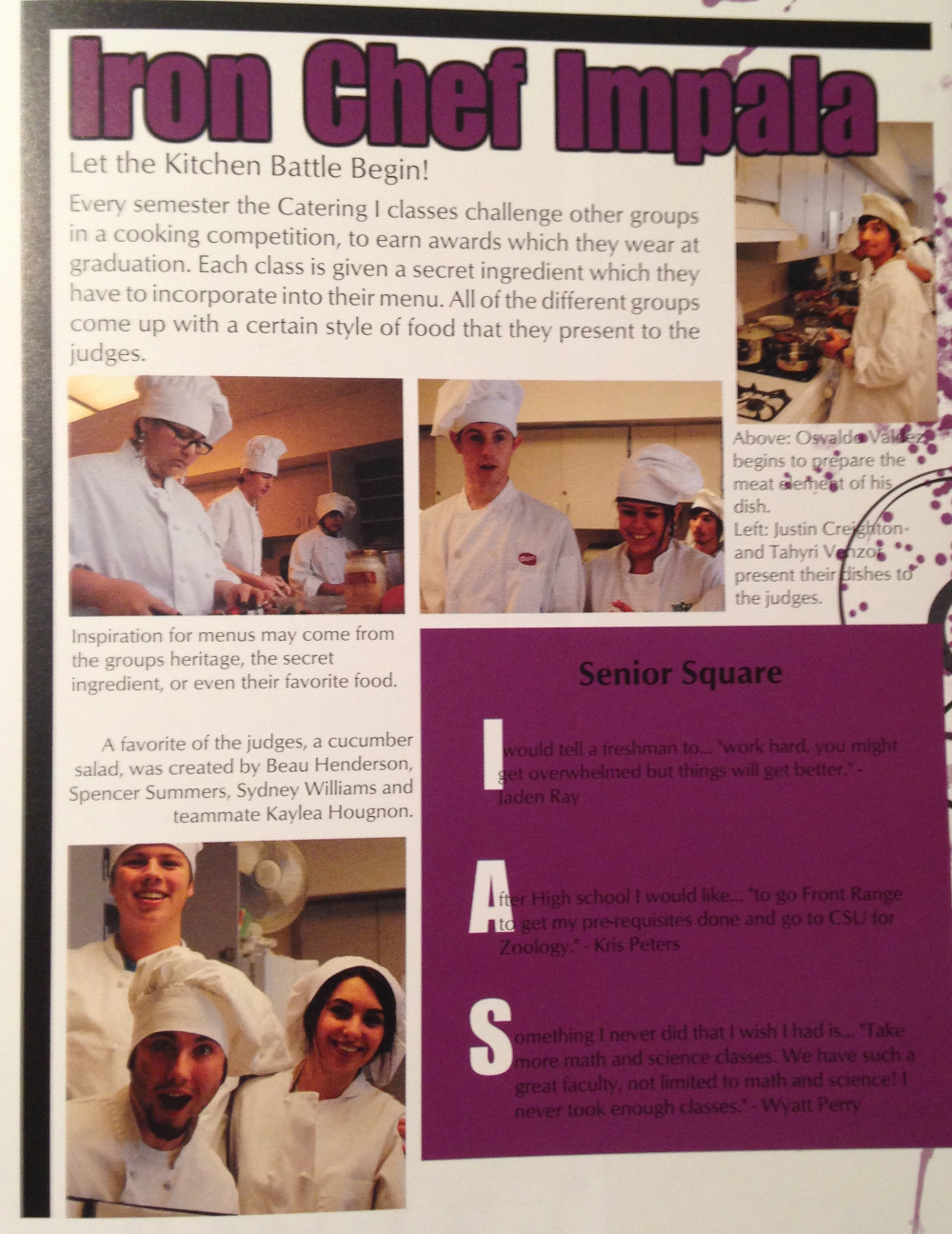 The catering class participates in an Iron Chef competition every year. If you attend the Homecoming event at the Silver Grill on Thursday night this week, you’ll get a chance to see the catering students in action.

Granted, there are some activities that have been discontinued at Poudre that I don’t think will be coming back any time soon. Given the cautious nature of the district’s legal department, I certainly can’t see a rifle club starting up again. 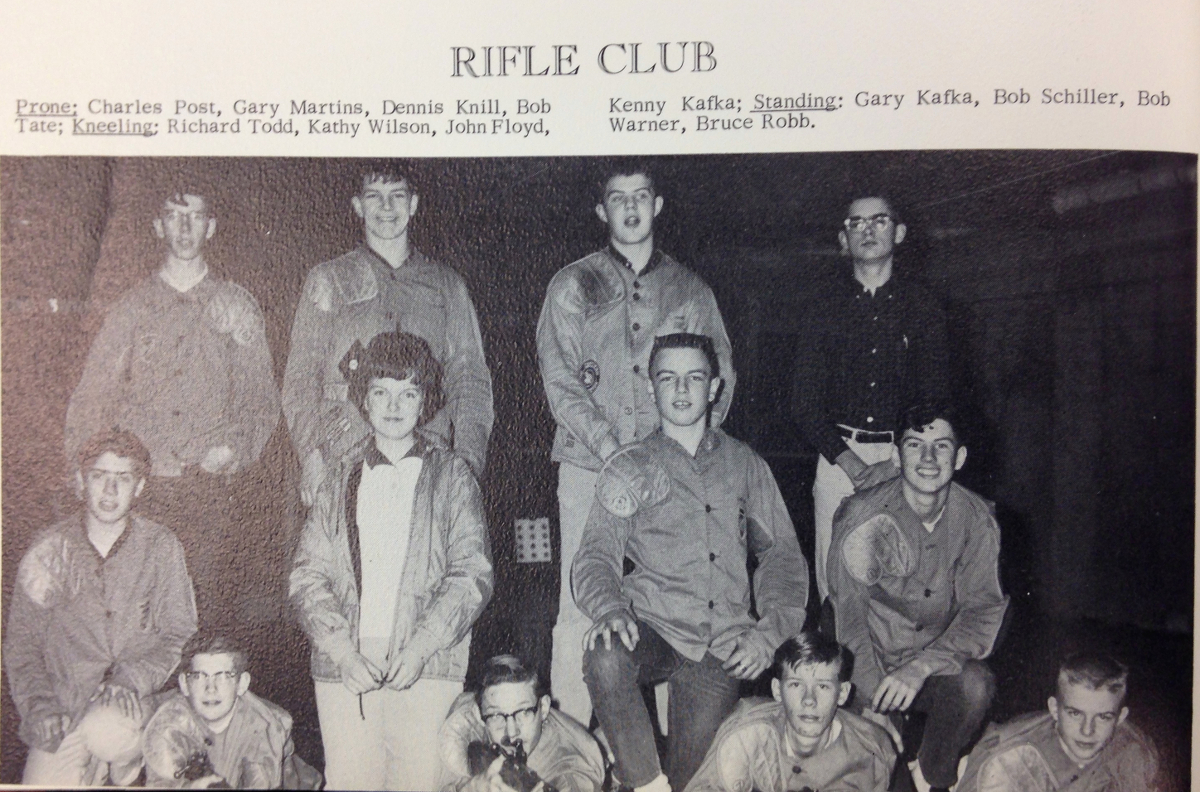 And some clubs have been discontinued only because the technology is outdated. The Amateur Radio Club has been replaced with the Robotics Team. 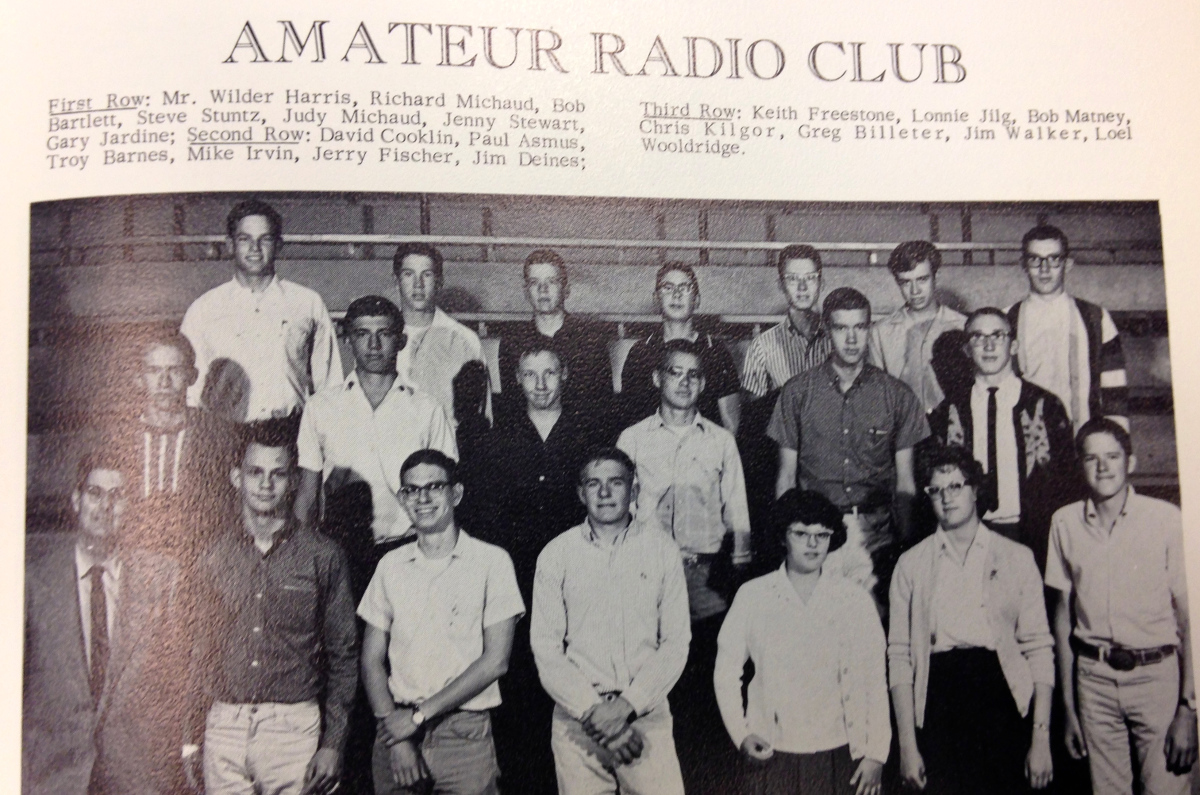 Though there are still many musical programs at the school, a Ballad Club is not one of them. The photo below makes me think back to the Lawrence Welk Show, Shindig, Hootenanny, and Hullabaloo. 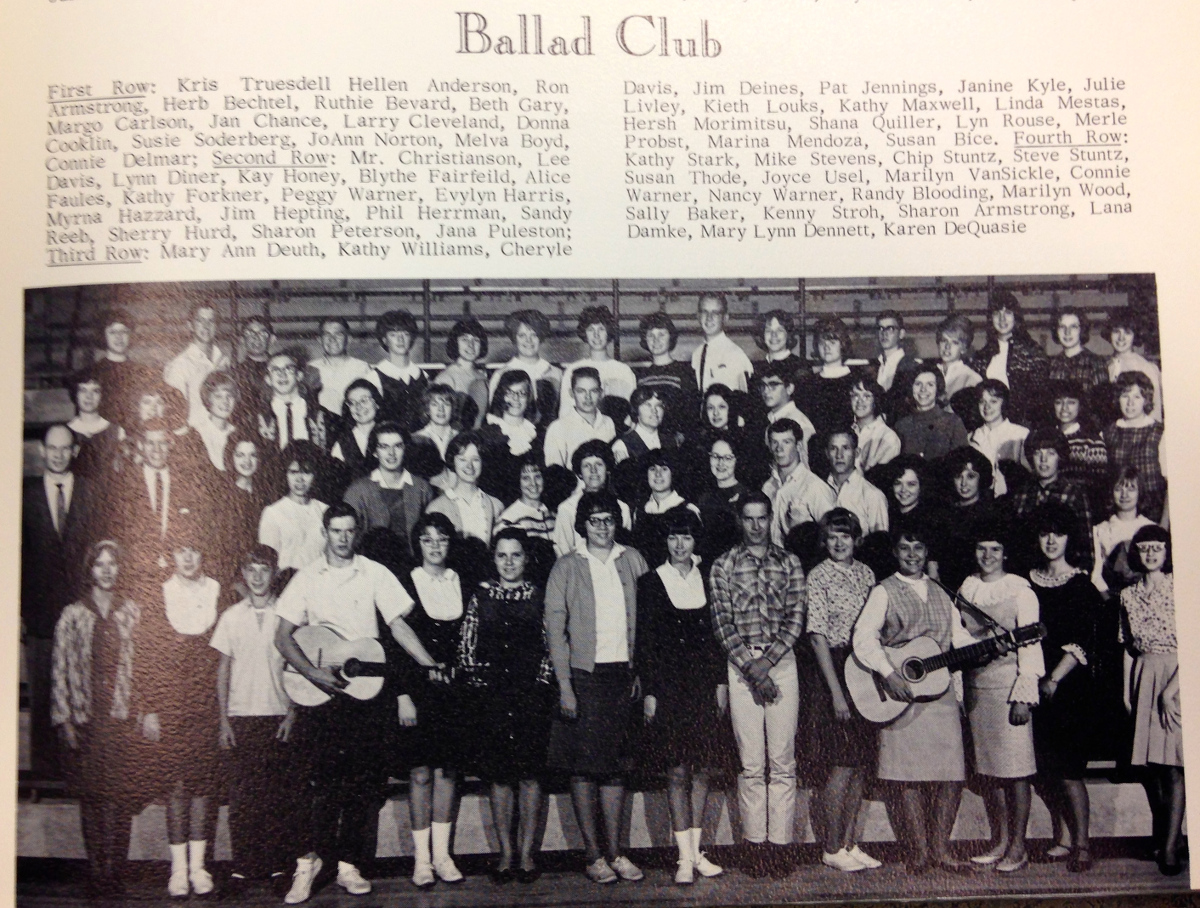 Despite changes in curriculums and clubs, one thing that remains strong within in the Poudre community is a desire to help others. In 1965, that was evidenced through the Junior Red Cross. 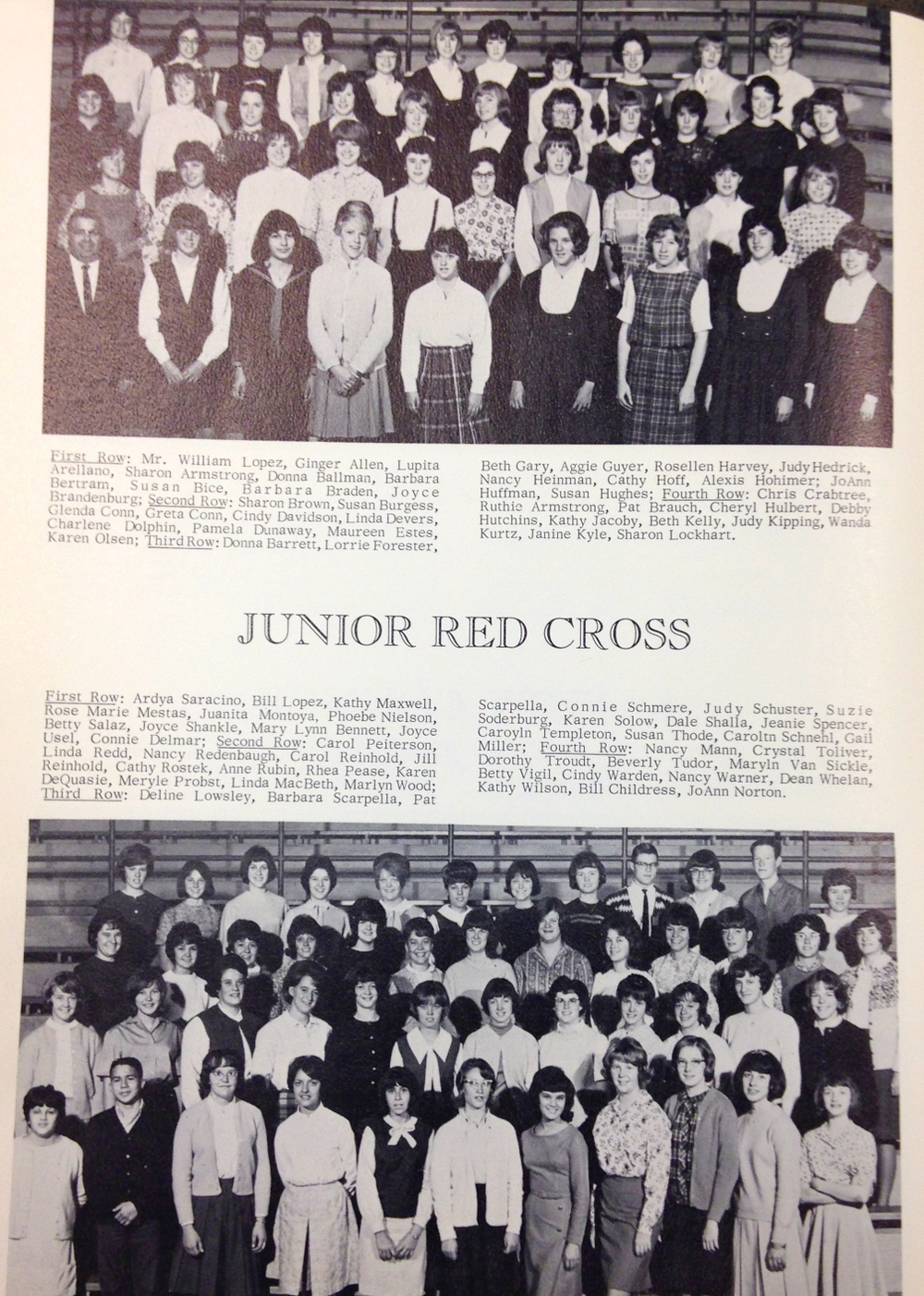 Today students helps families in need through the Feed Our Families food drive that takes place in November. Last year the school collected over 60,000 pounds of food that it was able to hand out to needy families for the holidays. 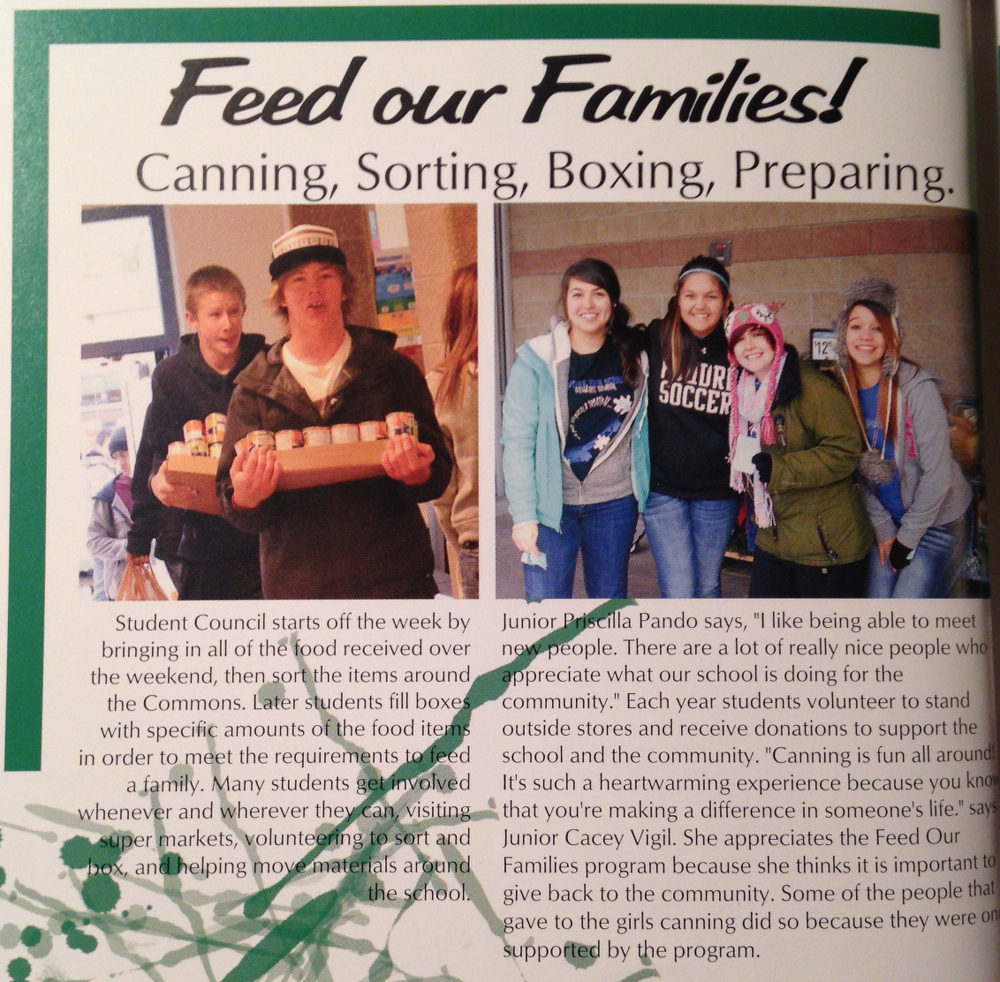 The entire school gets involved in collecting, sorting, and distributing donations during the Feed Our Families drive.

While there may never be another Rodeo Club at Poudre High School, the community spirit, practical service, and Impala pride remain deeply woven into the fabric of the school. 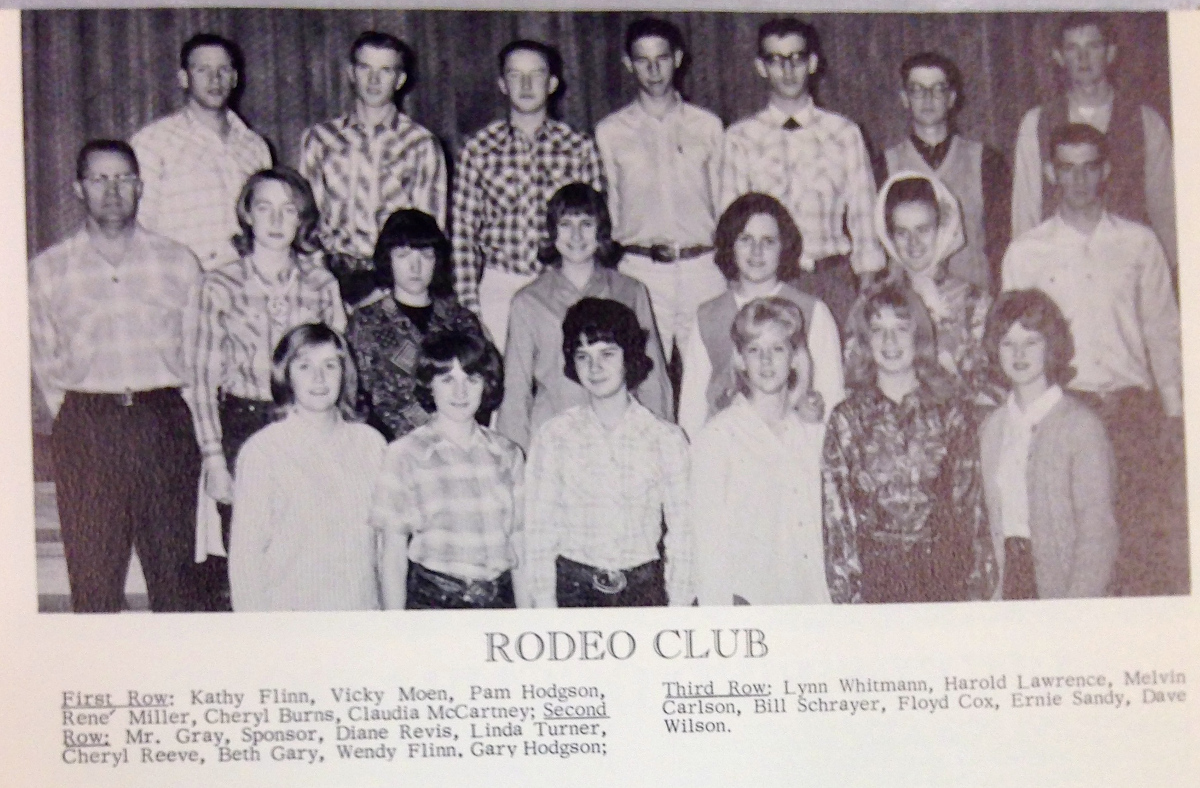 If you are a Poudre High School Impala, I’d love to hear your stories about school in the comments below. There are also several events happening this week to celebrate the school’s 50th Anniversary. The list of events can be found on the school’s website. The theme for this year’s homecoming? There’s No Place Like Home…

Welcome home to all of the Poudre Impalas that will be celebrating the school this week!

The decision, building and opening dates of the high school came from the PSD Historical Context  (pdf) that has been done on the buildings within the district. This is a great resource for historical data regarding our district schools.

Barbara Fleming’s article on the FCHS mascot, A Walk Through History: Sheep become mascots in a former cattle town, in the Coloradoan, helped me with information on when the Lambkin was chosen. I had always assumed the students picked a baby lamb only because it would one day grow up to be a CSU Ram. Nope. Not so. Turns out the FCHS students were leaders, not followers, when it comes to local sheep mascots.

Although I knew Poudre had raised an astounding number of contributions from last year’s Feed Our Families drive, I couldn’t remember the exact number. Thankfully, 99.9 still had the amount listed on their website.

All of the photos shown here were taken from either the 1965 Poudre yearbook or the 2014 Poudre yearbook. I’m guessing you can tell which pictures are from which without even looking at the subtitles.