Of the four historic districts in the city of Fort Collins, the Sheely District is perhaps the most surprising. The historic preservation movement started in the 1960s and 70s, and most of the properties that people were trying to save at the time were Victorian structures, built in the 1800s. Therefore, most people have (subconsciously) connected historic preservation with Victorian (or older) architecture.

But styles changed after the two World Wars, and those mid-Century buildings are now becoming historic in their own right. The buildings that were raised where beautiful Victorians had once stood are now themselves historic. (The First Bank building at the corner of College and Mountain is a perfect example of this.) And mid-century sprawling neighborhoods embody the values, hopes and ideals of that time period just as much as the ornate Victorians of the previous century had done before them. 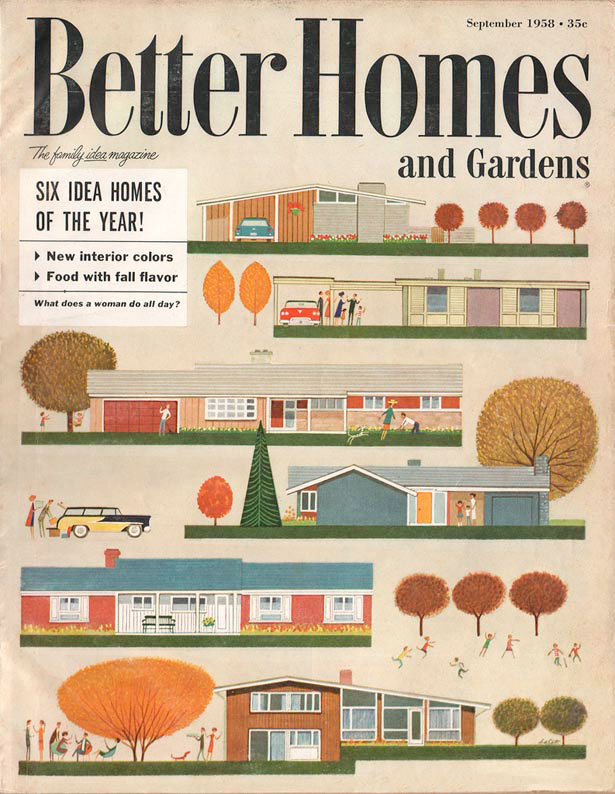 Following the Second World War, demand for housing began to grow. At first, subdivisions were added that included modest sized houses for the recently returned soldier and his young family. Circle Drive and the Mantz Addition are both examples of this, containing simple rectangular Ranch style houses that tended to be 1500 square feet or less. However, it didn’t take long before the prosperity of the post-war era began to affect development, and in 1953, the first sprawling subdivision was added to a somewhat distant part of the city. Taking advantage of the large tracts of land to the south of the Colorado A&M, Arthur Sheely bought 40 acres of farm land from Carl and Pauline Birky in 1951. Two years later he sold that land to Ben Olds and Bert Redd, two developers that began the process of turning the fields into an upper-middleclass neighborhood. 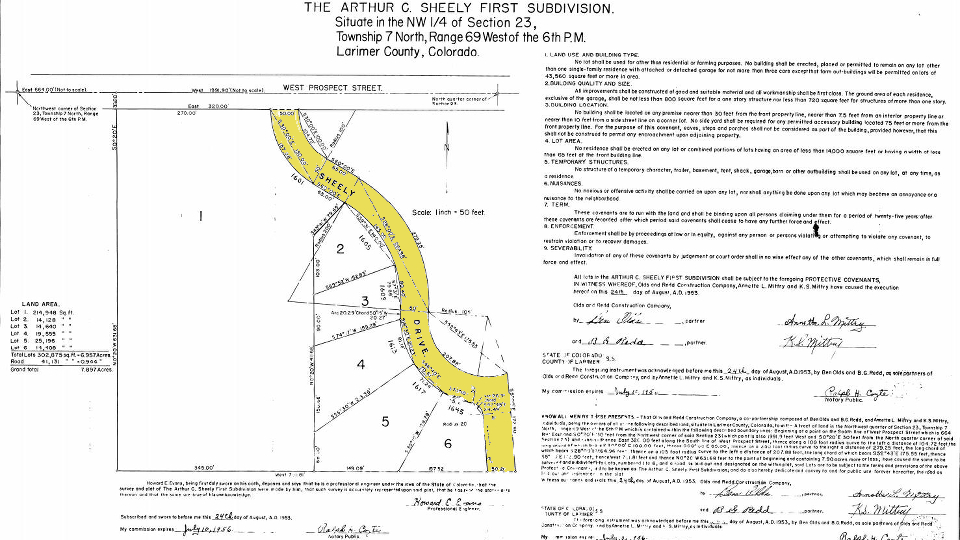 The Sheely Addition came about in three phases. The first plat is shown here (thanks to Narda Byczek and her husband’s extensive surveying collection). I’ve highlighted Sheely Drive in order to accentuate the change in street design between this subdivision and the pattern of streets in the rest of the city. The “rest of the city” is what we call “Old Town” today, where the streets are in the grid pattern that Franklin Avery laid out for the town in the 1870s. But with the rise of the automobile, luxuriously curvaceous streets were all the rage. (If you drive through any new development today, you’ll find that this is still the case.)

While the Mantz Addition (the area bounded by Shields, Mulberry, Washington and Laurel) also had curving streets, the Sheely Addition catered to a wealthier clientele. Though the houses were built by differing architects, they all exhibit a sense of expansive luxury that is noticeably different than the more modest and closely packed structures in the Mantz Addition. While the Mantz Addition houses ranged in size between 1000 and 1500 square feet, the Sheely neighborhood houses tended more toward 2000 – 3000 square feet. (And if you include finished basement space that opened out directly into the back yard on the backside of a hill, then some of these houses even topped 3000 ft2.) 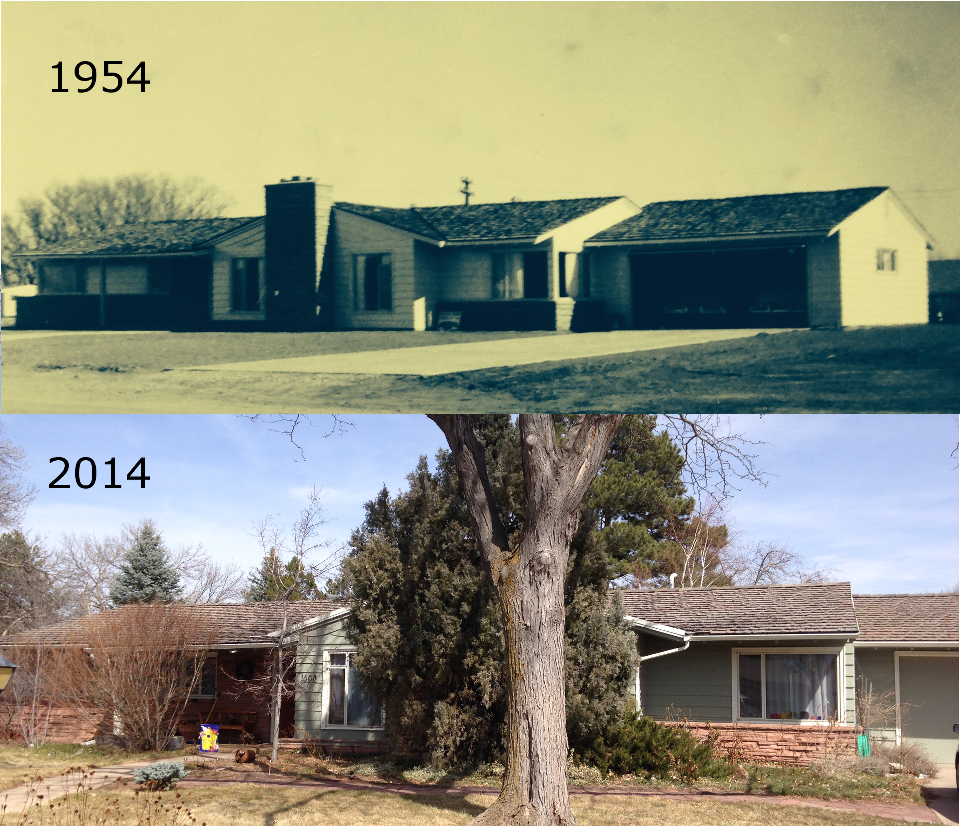 1608 Sheely Drive – The Sheely House, where Arthur  and Margaret Sheely lived.
(Top photo is from the County Assessor Records which are on file at the Fort Collins Archive.)

The houses in the Sheely Addition embody the spirit of the times, hugging the land, with large windows — some of which extended from floor to ceiling — and detailing in the form of natural textures — wood and stone — rather than in decorative ornamentation.

1600 Sheely Drive — The Ben Olds House
(Top photo is from the County Assessor Records which are on file at the Fort Collins Archive.)

The Sheely Drive Neighborhood Historic District was added to the Register of Fort Collins Historic Places in the winter of 2000, when the oldest house in the district was 47 years old. Though buildings are generally not considered for historic designation unless they are 50 years old in Fort Collins (some places, such as Denver and Aspen, use a 30 year rule), the houses in this district retained so much historic integrity, strongly embodied a specific time period, and had ties to several prominent residents of the city, that it was included as a landmarked district before the usual 50 year period had elapsed. 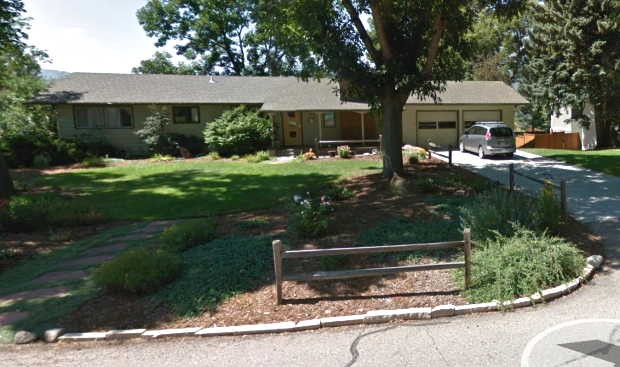 1609 Sheely Drive — the Wells House (patterned after a design found by Mrs. Wells in Better Homes and Gardens).

When the neighborhood was built, it was assumed that everyone would drive to get anywhere they needed to go. So sidewalks weren’t included. Nor were there curbs or gutters, creating a seamless connection between streets and yards. When the neighborhood sought historic designation in 1999/2000, they were sure to include these kinds of details in the nomination application. The neighbors like these aspects of their community and they want them to be preserved, despite ever changing street codes in the city. Including this type of detail is a great example of residents using historic designation not only to receive financial benefits and to protect the character of the houses in the neighborhood, but also to protect these other details that they enjoy and appreciate. This puts the power of future development in the hands of the residents, rather than in the ever changing city codes. 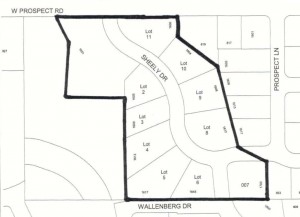 The boundaries of the Sheely Drive Neighborhood Historic District.

Though the rest of the houses in the adjoining neighborhood may have sidewalks added, second stories built on, and architectural styles changed over time, this little segment of 11 houses will remain largely as they are today, a testimony to the grand designs we had in America, and here in Fort Collins, of what expansive, automobile-inspired living could look like.

As always, I feel as though I’ve barely skimmed the surface in telling the story of this neighborhood. There are so many more interesting details that could have been included. I’d encourage you to read through the nomination form for the district, which gives details about not only original owners, but subsequent owners for each house as well. There are also snippets of interest regarding one of the first backyard pools in town, a bomb shelter, and far more detailed descriptions of the hows and whys and whats of the architecture that I didn’t include here.

Another wonderful resource regarding this time period is the Historitecture document on Post-War development in Fort Collins. It is entitled, “‘Fort Collins E-X-P-A-N-D-S’ The City’s Postwar Development 1945-1969.”

The older shots of houses in the district came from County Assessors records which are on file in the Fort Collins Archive.

The cover image of Better Homes and Gardens was taken from a website called Design on the Rocks.

The image of 1609 Sheely Drive is from Google Streetview.

Info on when the district was landmarked came from the Coloradoan: “Sheely Drive Neighborhood gearing up for historic designation”
Ruisard, David. Fort Collins Coloradoan [Fort Collins, Colo] 08 Feb 2000: A.6.