I’ve written several stories that include the quarry town of Stout, Colorado. (Pioneer Life, a Life of Sacrifice and Sorrow; Hugo Frey – Tales of Adventure from a Native Son; and The Flowers of Bellvue all included connections to Stout.) But what I really long to do is take a walking tour through the area. Much of it is now under the Horsetooth Reservoir. But thanks to several alert readers (Thank you!) I’ve discovered that the place where the hotel stood is still above water on the south end of Horsetooth.

Here’s a short photo tour of what Stout looked like back in the day. All of these photos are from the Denver Library Archive online. 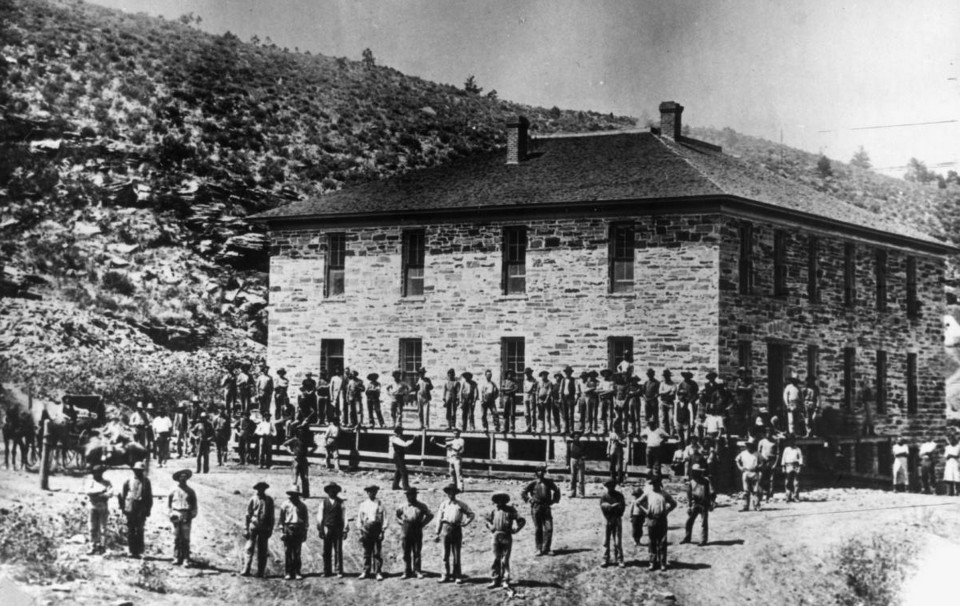 In a quarry, what better material to build a hotel out of than a whole bunch of rocks. You’ll note that the clientele was made up entirely of men. There does appear to be one woman in the photo, though. Can you find her? (You might have to click on the photo to enlarge it.) 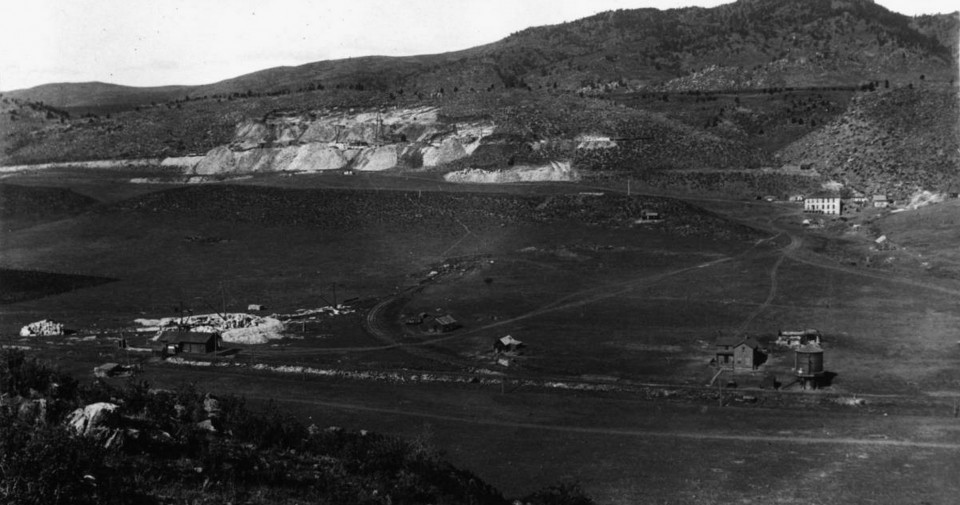 Stout, Colorado in 1885. The text from the library states, “Panoramic view over the railroad depot, water tank and tracks of the Colorado & Southern railroad at Stout (also known as Petra), Colorado in Larimer County; includes the quarry and boarding hotel.” (Call # X-13708)

This photo particularly intrigued me. I wondered if I could find the same view on Google Maps. I gave it a go, but I’m still not certain where this is. I’m guessing that Hughes Stadium would be just over that ridge if we were looking at this today. But that’s entirely just a guess. (I’m assuming this is facing east because I don’t see mountains in the back ground. But perhaps it was just a particularly hazy day?)  [Edit: Here’s a link to Google Maps that shows the approximate area today. I found it thanks to readers Mike Webber and Mark Blacklin. Thanks, guys!] 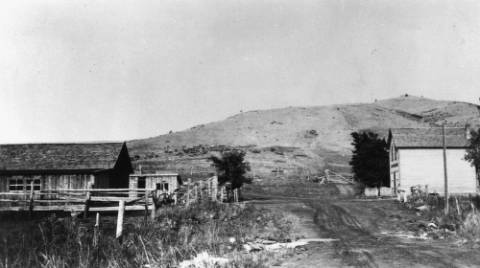 The area around Stout looked a lot like any other small town in Colorado. It was dry and dusty with prairie grasses encroaching on the roads.

This photo makes clear that Stout wasn’t just a quarrying town. There were ranchers and homesteaders as well. 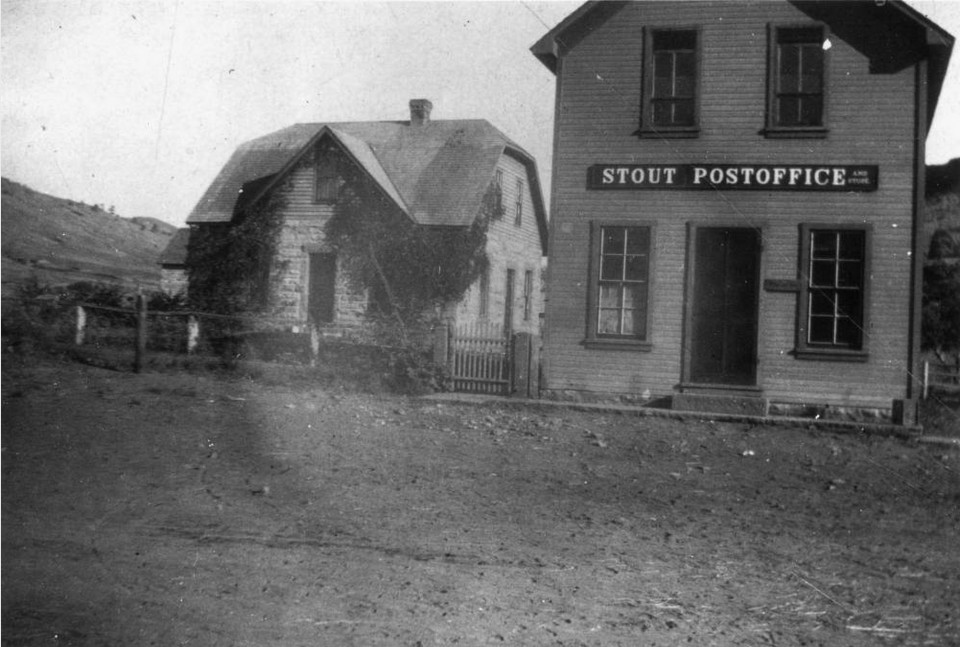 It’s interesting to note that the Wathen house was built of stone, as one would expect in a quarry town. But the post office and the farm buildings were all made of wood.

A note attached to this photo states “This post office was finally moved to Lake St. in Fort Collins, was later stuccoed and made into a home.” Can you imagine moving a house from where Horsetooth is now all the way to Lake Street in Fort Collins! 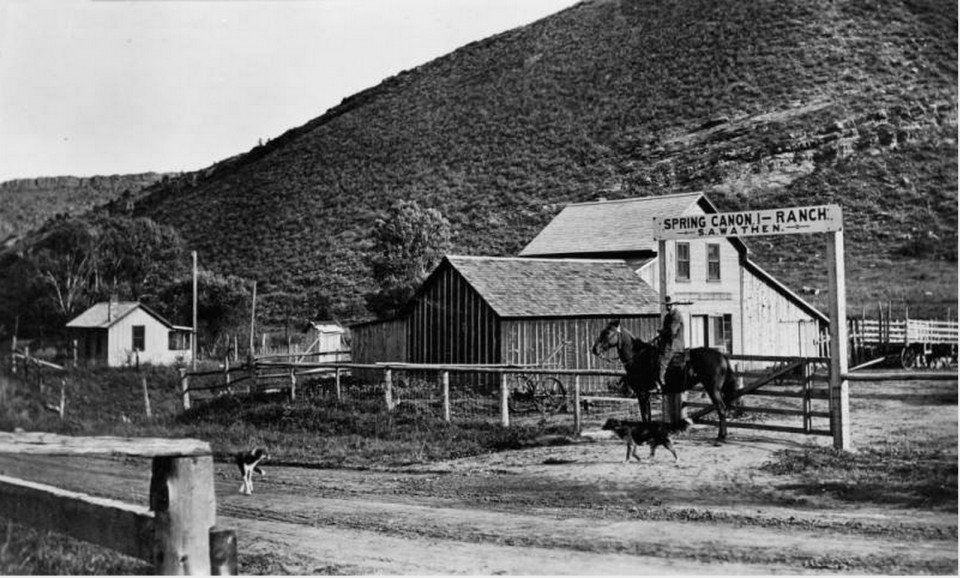 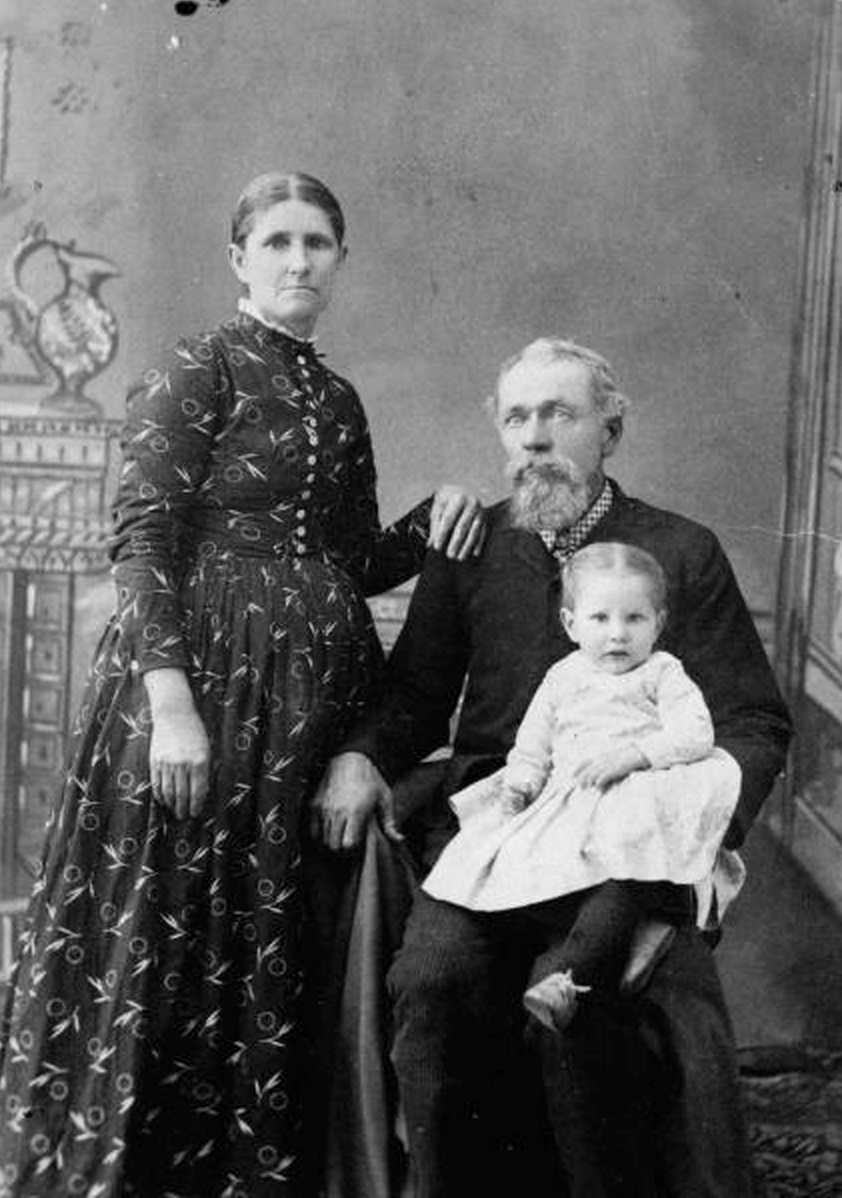 I did a cursory glance through some old newspapers that mentioned the Wathens and turned this gem up.

Can you imagine showing up as a guest at someone’s front door and saying, “Hey, thanks for inviting us. Here’s two rattlers’ I killed on our way over. Where should I put them?” 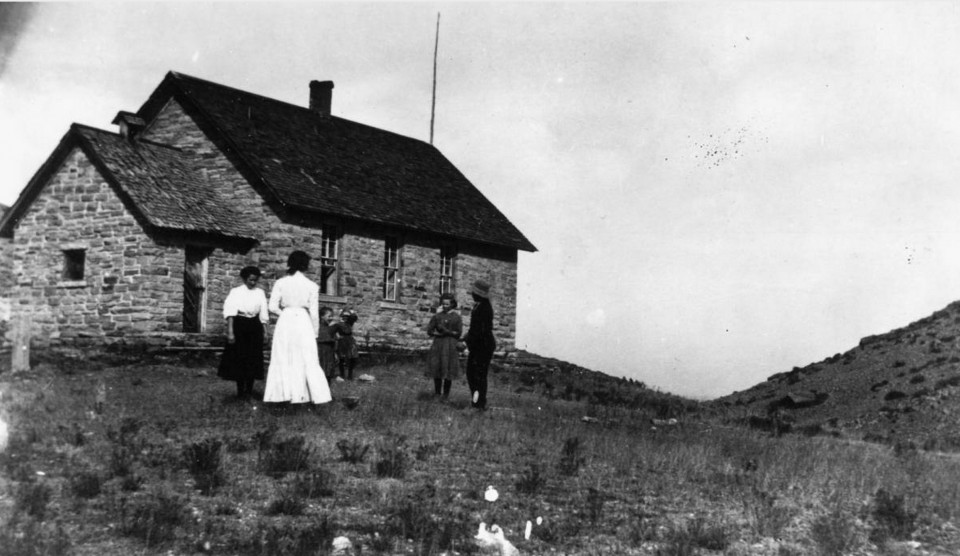 The school house in Stout. The text attached to the photo states, “Schoolchildren and their teacher, Nora Wathen, stand outside their one-room native stone schoolhouse, Stout (also known as Petra), Colorado in Larimer County.” (Call # X-13709)

Many of the workers in the quarry were immigrants. Some were able to bring their wives, though it certainly wasn’t an easy life for them. This school house would likely have had students that spoke English, Swedish, and possibly other languages as well. 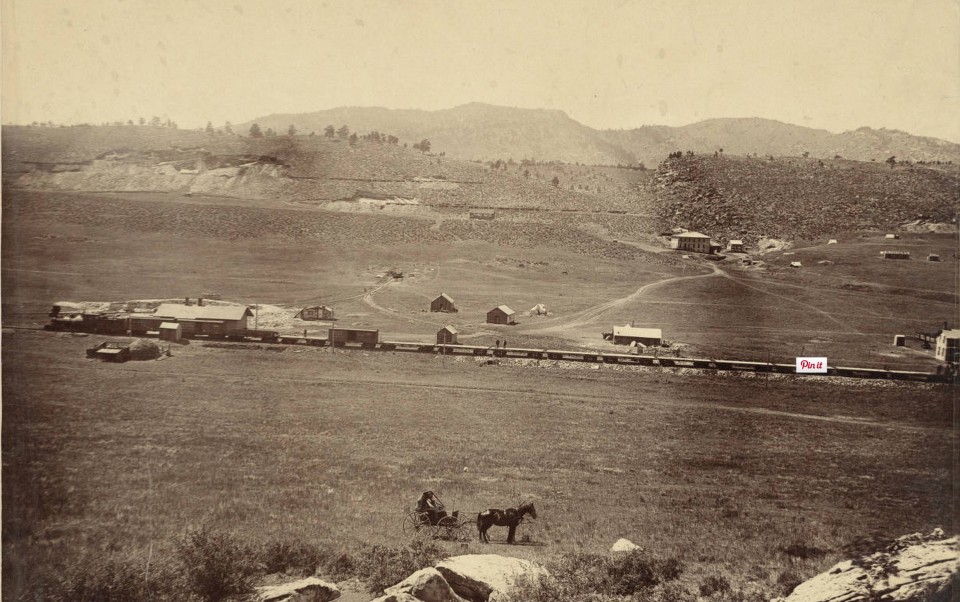 A Greeley, Salt Lake and Pacific Railway train stands on the tracks in this 1893 photo of Stout, Colorado. (Call # Z-1856)

The hotel is visible in the background of this photo. And the train line is easy to see through the center of the photo. The trains would haul the quarried rock out of Stout to Denver, Chicago, and several other big cities. 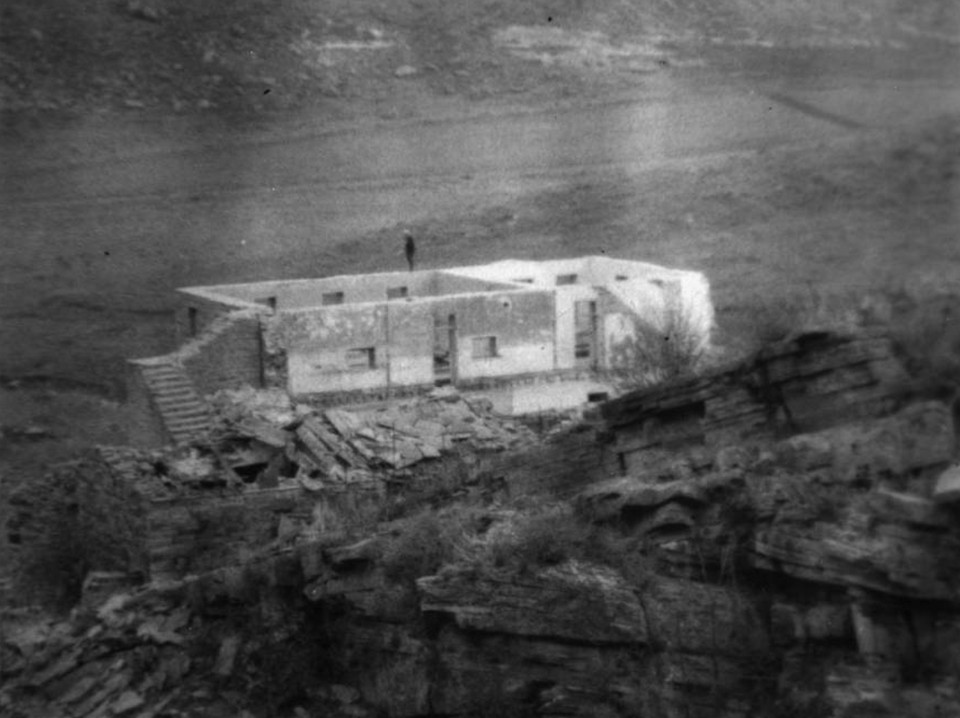 Ruins of the hotel built by the Union Pacific Railroad – 1928. The description on the library website includes the text of a note written on the back of the photo: “Situated about ten miles northwest of Loveland, Colorado. The big building is that of the old hotel built by the Union Pacific Railroad. The city flourished during the building of Omaha, Nebraska, and many other large cities including Denver. Just as the rock for building and paving for Denver came from the quarries at Lyons, Nolan, Beach Hill and other places so the rock for the building of many inland cities such as Omaha came from Stout, Arkins, and so forth. When cement came into use all these industries died. Hundreds of men, mostly foreigners were thrown out of work.” (Call #X-13704)

In the late 1940s, the remaining buildings in Stout were moved and dams were constructed to create a reservoir for water storage. Water is piped from the headwaters of the Colorado River on the other side of the Continental Divide to fill Horsetooth Reservoir.

The ruins of the hotel are still above water on the south end of the reservoir, and the owner of the property where the hotel once stood sent in this photo of the ruins today. 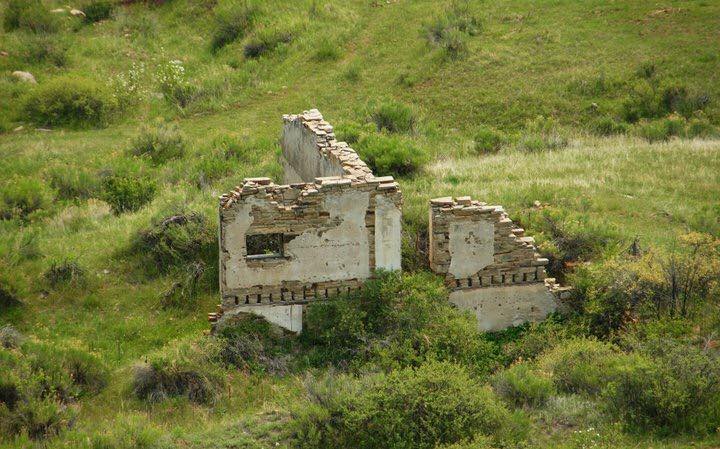 The remains of the Stout hotel. (Courtesy of Anna Beth Gindler.)

These ruins are on private property and are not accessible without permission from the landowner.