The First Murder in Fort Collins

The First Murder in Fort Collins

Albert Sherwood had just gotten off work at the Tedmon Hotel where he was a dishwasher. It was Christmas Eve, 1881, and he had a mind to blow off a little steam. He crossed the train tracks along Mason street, walked through Washington Park (which was really just an empty field), and alighted upon the residence of Lizzie Palmer, a fellow African-American in an otherwise very White Fort Collins. Liz ran a pleasure house on N. Meldrum street on a lot that also supported a small chicken farm. (One could say that the property had two “hen houses”!) A man played the fiddle while the rest of the company, both male and female, Black and White, danced in time to the music.

At some point in the evening, William Lindville, who was generally called Tex, must have said something unkind to Albert Sherwood because the next thing everyone knew Sherwood had grabbed a nearby pitcher and started wailing on the man. Lindville pulled out a pistol and began firing, at which point all hell broke loose. The lights went out. Women went diving under beds. Several of the men fled the premises, barred the doors behind them, and waited to see what would come of the situation. The newspaper reported that within the house “ten or a dozen shots [were] fired from half as many revolvers.” Those inside finally busted their way out, leaving Albert Sherwood behind them on the floor of the kitchen with a shot to the head, just over his left eye.

Sherwood was hurriedly carried back to the Tedmon hotel. There he was “given all the care and attention that medical skill and kind hearts can suggest” (according to the December 29th, 1881 Fort Collins Courier), but around noon on Christmas Day the injured man breathed his last. His death constituted the first murder in the fledgling community of Fort Collins. Tex Lindville turned himself over to the authorities. According to local historian Barbara Fleming, “During the investigation, it developed that Lindville was wanted for murder in Missouri, but the Fort Collins sheriff didn’t think the reward, $100, sufficient to warrant arresting him and delivering him there.”

An inquisition was held from December 26th – 28th, during which time the county coroner, Russell Fisk, determined that Sherwood died “from a pistol shot fired from a pistol in the hands of William Lindville without feloneously [sic] intent.”

There’s no more mention in the papers of what became of the brothel where Albert Sherwood sought pleasure and instead found mortal pain. Three years later Isaac Catlin, the owner of the property, defaulted on his loan and had to give the place up.

It’s unclear who lived at the corner of Maple and Meldrum next, but by the very early 1900s, Charley Clay was said to be living in a cozy cabin at 317 Maple, which would essentially be the back half of the property that the brothel had stood on. For all we know, he lived in the very same building, though the address had been changed. Or perhaps he lived in what had originally been the hen house… the one that held chickens.

Eventually the buildings on the lot were razed and replaced with a row of Four-Square houses. It’s possible this happened after Charley’s passing in 1910. These in turn were bulldozed in the ‘70s to make way for the present-day City Hall. An adjunct building and parking lot are now located where the old brothel once stood.

Fort Collins Courier, December 29, 1881, front page. This article gives a fairly complete story about this event, though the reader should be cautioned that racist attitudes were liberally spread throughout the text.

Barbara Fleming’s article on this same incident, “Once Upon a Time: Murder on Christmas Eve,” can be found in the May 11, 2011 Greeley Tribune.

A copy of the coroner’s report from the inquisition into the death of Albert Sherwood was sent to me by Lyn Iannuzzi.

Artwork by my daughter, Anna Dunn. 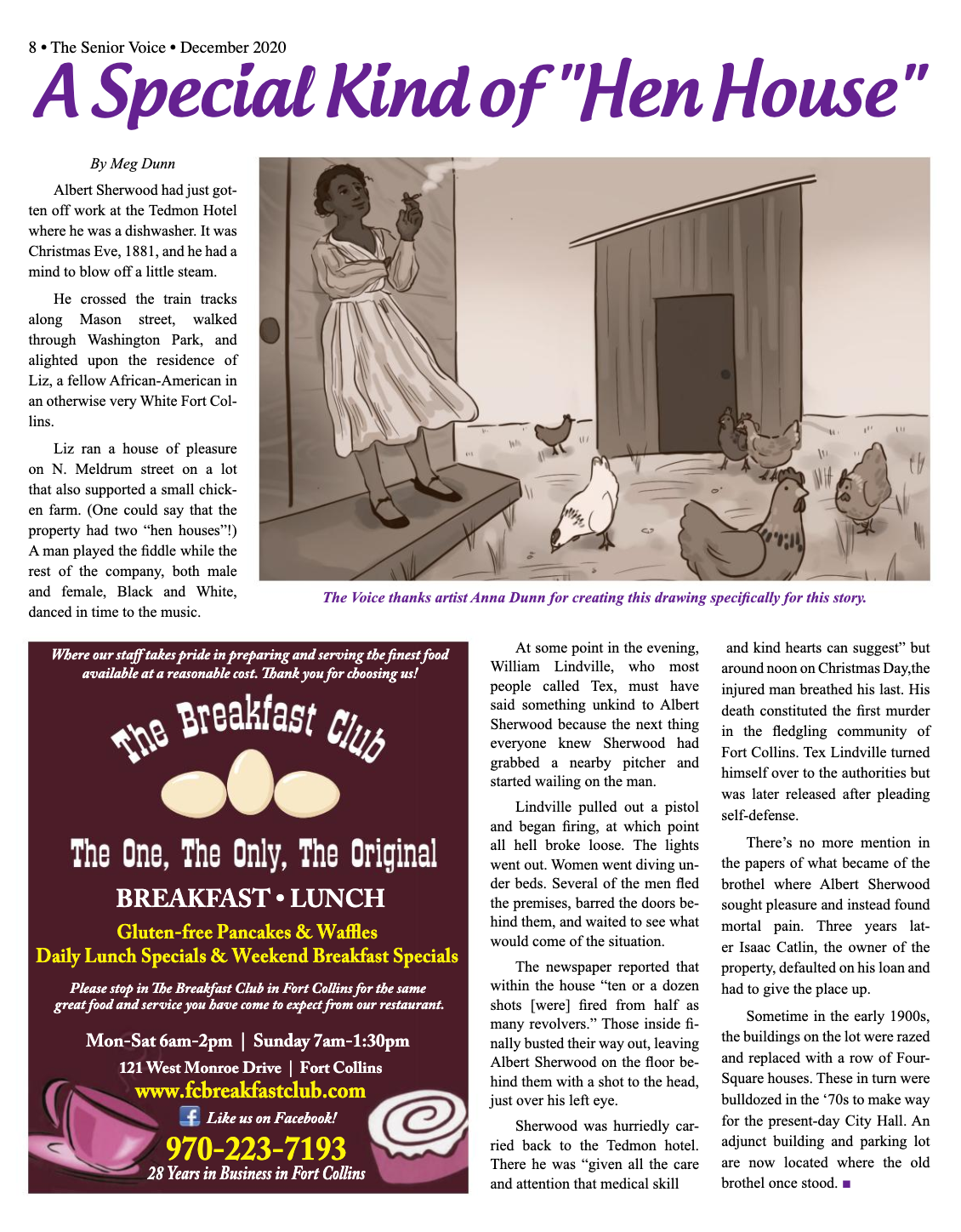 A somewhat shorter version of this story was published in the December 2020 edition of the Senior Voice.