Andrew Carnegie, a prominent Scottish-American businessman who made his wealth through the steel industry, believed that the wealthy should use their riches to enrich society. Though he gave to many charities, one program he is particularly well known for is his largesse towards communities that wanted to build their own public libraries.

Carnegie created a formula which he used when donating his funds. Recipients had to demonstrate a need for the library, provide the building site, provide for continuing maintenance through a regular tax, and allow anyone to use the library for free (regardless of race, class, gender, etc.). Evadene Swanson describes the process that Fort Collins went through to get a library in her book, Fort Collins Yesterdays:

Mrs. Donald McLean, president of the Columbian Club, and wife of a Fort Collins doctor, wrote a request for aid in June, 1902. She received a promise of $10,000 in July, so rapidly that the library board with Mayor Frederick R. Baker, Ansel Watrous, and Lerah McHugh instructed the secretary to write for verification. “Is this authentic and is the money available now?” wrote Mary Kilgore.

On Monday I posted a picture of the old Carnegie Library for #MailbagMonday. In addition to a good discussion on the probable date of the photo, I received links to several photos of the library that Charles Willgren dug up from around the internet. It was such a wonderful set of photos, that I thought I’d stick them all together here for you all to peruse.

Thank you, Charles, for all the work you did in finding these! 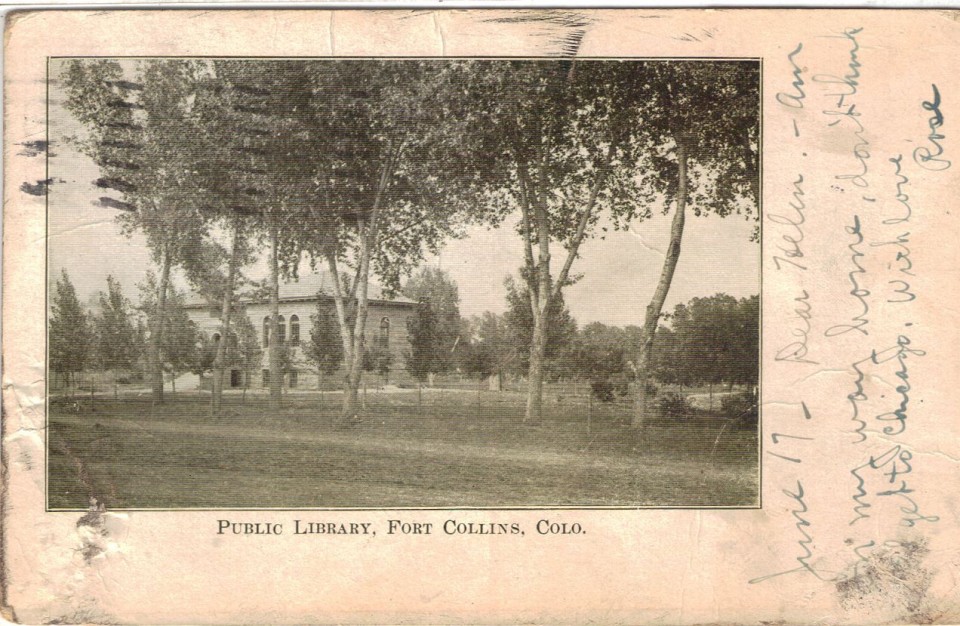 This is the photo of the library that I posted to social media on Monday. Charles noted that the title of the eBay entry gave a 1907 date for the card. (Somehow I’d missed that when I first posted it.)

This same photo can be found in an earlier postcard from 1906. 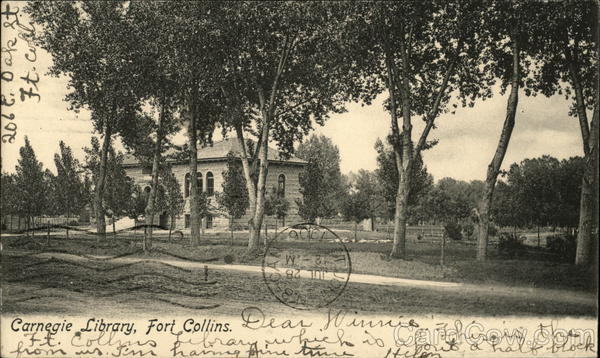 This photo of the Carnegie Library from 1906 was found on CardCow.com.

And this one from a collection of Carnegie Libraries in the “square” states. 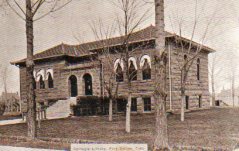 This postcard was postmarked in 1912.

There’s no date on these next two, but as Charles pointed out to me, you get a good view of the library with awnings both extended and retracted in these. I was also pleased to note the bicycles out front. (I also write a local bicycling blog.) 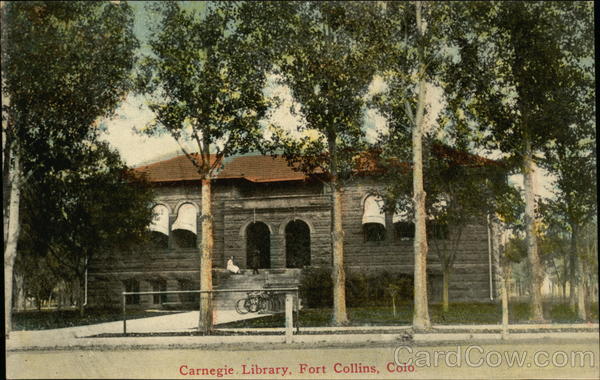 Here the awnings on the library were fully extended and the bike rack was full. This photo is from CardCow.com. 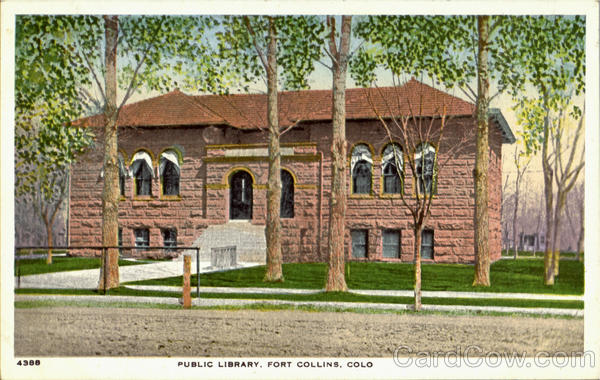 Here the awnings were pulled back and the bike rack is still there, but it’s empty. This photo is from CardCow.com as well. 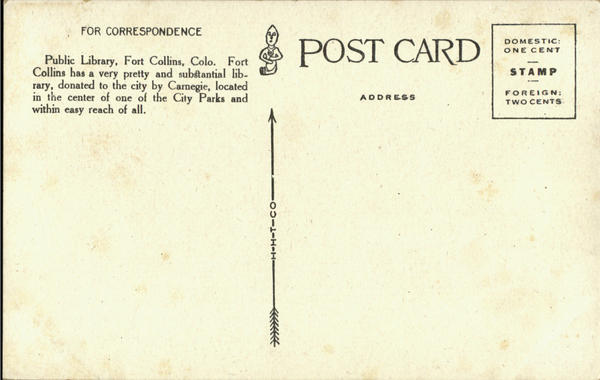 This is the back side of the above postcard, which includes a nice description of the library.

There are a few photos from our local Archive as well. 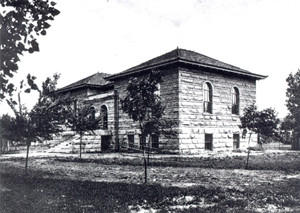 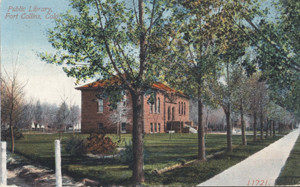 Though Charles found a copy of this card in another collection, it turns out that our local Archive has one as well. This was the only photo we could find of the library taken from the north. (FC Archive – H03578A.)

And this photo I found in the Denver Archive. 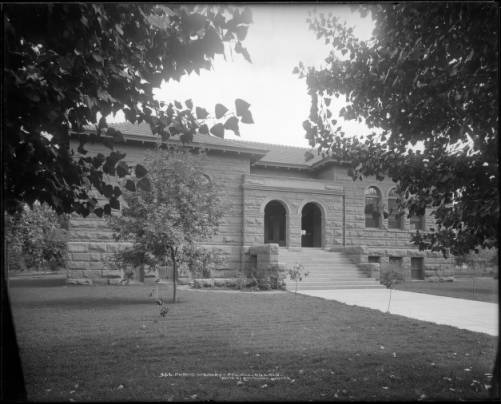 This photo is from the Denver Library Archive. It’s from the McClure collection. Reference #MCC-356.

Since being built, the library has had an addition built onto the back side in the same style. When the new library was built on the east side of the block, this building became the local museum. But when the Discovery Center and the History Museum were combined into the Fort Collins Museum of Discovery, this building began being used for other purposes. The Arts Incubator of the Rockies was here. But I’m not sure what the closure of Beet Street will mean in terms of tenancy.

Here are some more recent photos of this building that I’ve taken. 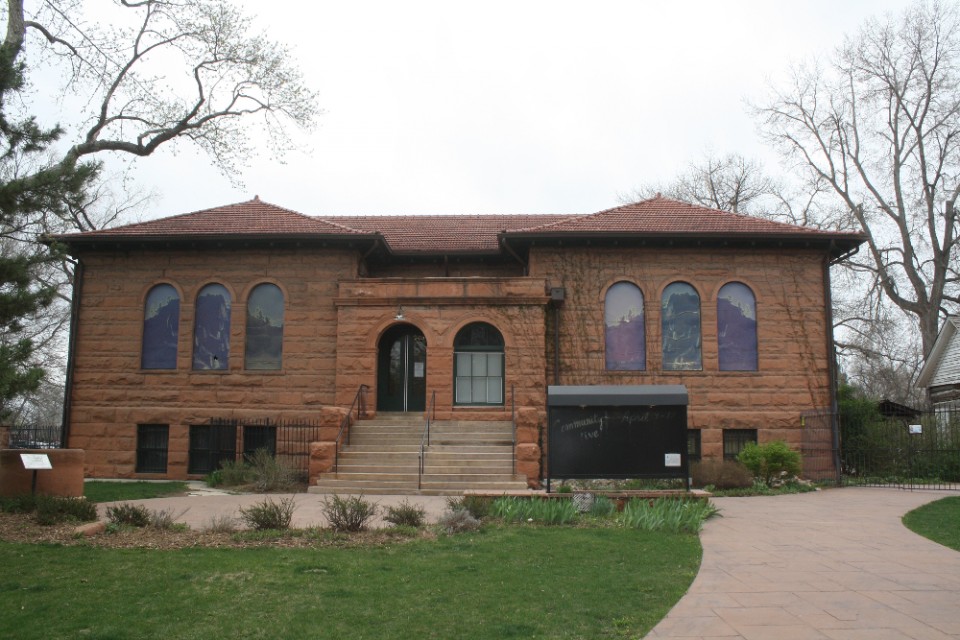 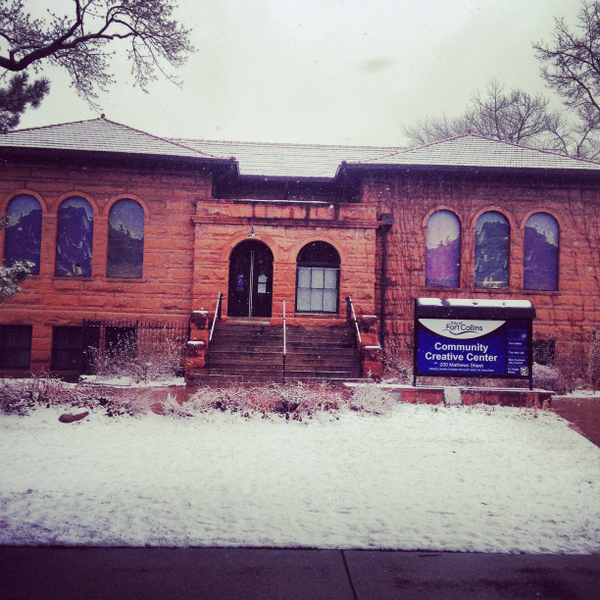 Wikipedia has a very interesting article on Carnegie Libraries. I got some of my information from the Wikipedia page and some from Evadene Swanson’s book, Fort Collins Yesterdays.