Then & Now: The Sugar Beet Neighborhoods

The last standing beet shack in Fort Collins’ sugar beet neighborhoods fell in on itself in last week’s snow/rainfall. I waxed philosophical about the event in Tuesday’s post, and today I thought I’d pull together some Then & Now photos of other houses from these three historic neighborhoods.

I was disappointed in the selection of county assessor’s photos that are available online. For most Old Town houses, there are photos from 1948 and 1968, two years when the county went through the neighborhoods and updated photos for properties in town. So comparisons over a substantial period of time are often possible. But many photos from these sugar beet neighborhoods date from the 1980s and 90s, which really isn’t all that long ago. And yet, the changes that have been made to these buildings, despite such a short passage of time, is in some cases quite remarkable.

I wasn’t able to do much of a comparison for Andersonville, but there are a couple of examples from Buckingham and Alta Vista that are definitely worth checking out.

The Buckingham Neighborhood (AKA The Jungles) 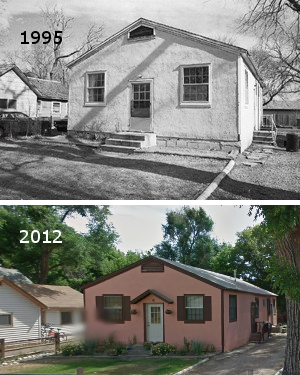 This house has had ornamentation added in the form of shutters and a small overhang built over the front entrance. The side stairs look identical and the house next door looks pretty much the same.

The beet shack had a front door added, which makes me think the original front of the building had been in the back. The humped roofline was apparently characteristic of Germans-from-Russia building, a reflection of styles they brought with them from overseas. Note that the small building in the back had an addition and it looks like a side window was covered over while the front window was expanded. 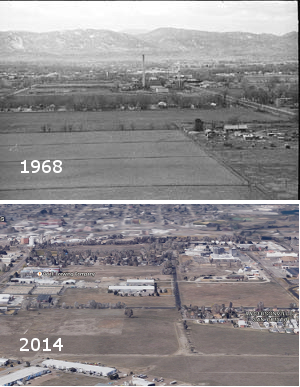 There wasn’t much in the way of photos for Andersonville. There was a school listed as being at the corner of 9th (Lemay) and Linden. (But where did those two streets meet up?)  And there was a community center, but I couldn’t find an address for it, and after Google-traveling through the neighborhood for awhile, I finally gave up on finding it. So I went with this aerial view instead… which mostly just shows that the sugar factory is now gone and several warehouse style buildings have moved in since. 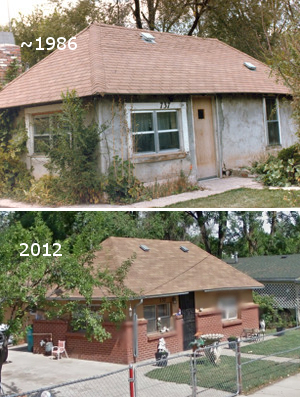 This house has had a brick façade added to the lower half of the exterior of the house. The house address is in the same location and the roofline is the same. But the window on the right side appears to have been changed, and a roof vent has been moved to be more symmetrical along the roof. The front walkways have also been rearranged. As much as I like the cleaned up look from the second photo, I have to admit that the upper photo has a quaint Old World charm to it that seems somewhat lost today. 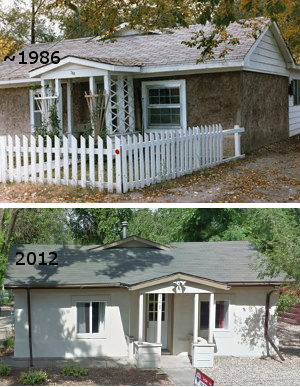 This house looks largely the same with some paint added and a trellis removed. 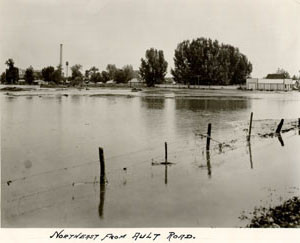 These neighborhoods have undergone a few floods over time. I found this photo to be particularly interesting because of what E. Lincoln Ave. was called on the photo… the Ault Road. Before I took over the Forgotten Fort Collins blog, Maggie Dennis wrote an article on Lincoln Avenue in which she wondered if the street had once been a part of the Lincoln highway. It’s possible that the early name means that it wasn’t part of the Lincoln highway after all.