When the Klan Came to Colorado

The Ku Klux Klan was at the top of its game in Colorado as 1924 came to a close. The organization had swept the statewide elections, putting Klansmen into positions of power on the U. S. Senate, the Colorado House and Senate, as governor of the state, as mayor of the state’s capital, and in numerous other positions throughout Colorado. But railing against the ineptitudes of others versus having to prove not inept themselves, turned out to be a harder ask than the Klan had anticipated. A growing country-wide anti-Klan movement not only blocked some actions of the Hidden Empire, but also helped to expose hypocrisy and create cracks within its leadership. 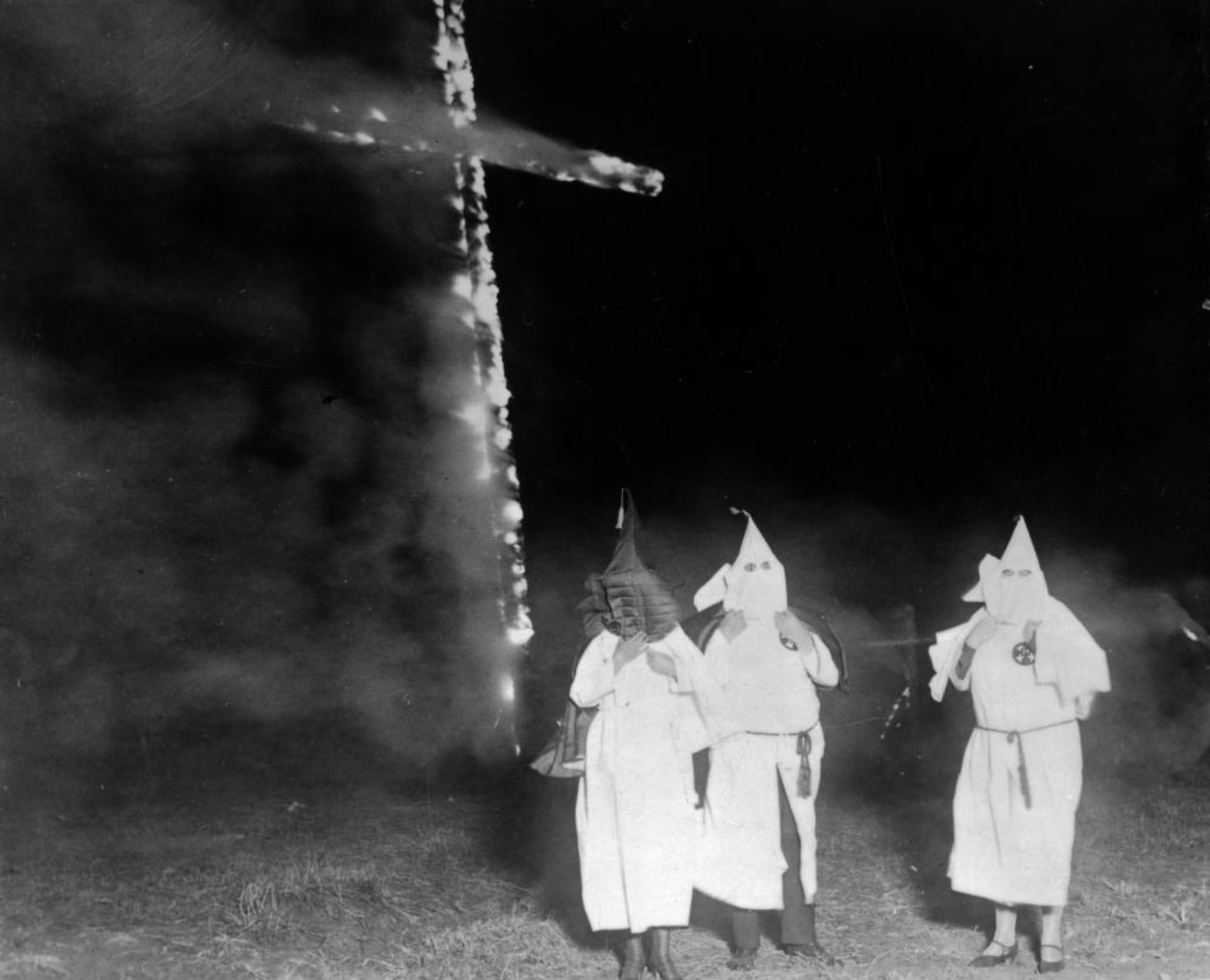 The Klan had won stunning victories across the state, providing a strong position from which to make sweeping changes, both legislatively and through increased enforcement initiatives. The Steamboat Pilot, on November 19, 1924, expressed the dawning realization that the Klan had taken control.

The usually well informed Denver correspondent of the Grand Junction Sentinel sends this paper the following dispatch under date of November 15. A representative of the Sentinel learns from various reliable sources that there will be many surprises in the way of swapping of offices, filling of appointments, rewarding the faithful and fulfilling of pre-election deals shortly after the first of the year when the Ku Klux Klan takes possession of the state government. The Ku Klux Klan, and not the Republican party or the Democratic party, will be in complete control. This point has been particularly stressed since the visit here last week of the imperial wizard and the conferences he held concerning the Colorado situation. The carrying out of the terms of the deal whereby United States Senator Lawrence C. Phipps receive the official endorsement and support of the Ku Klux Klan will provide some of the most startling features of the entire proposition .

The Ku Klux Klan will completely dominate and control every state elective office from governor down including the two offices to which Democrats were elected—those of lieutenant governor and superintendent of public instruction. The klan claims that it is entitled to the credit for every election on the state ticket, both Republican and Democratic, and this claim is not disputed. The new administration will be a Ku Klux Klan administration from top to bottom, and the legislature will be controlled by that organization. Some startling announcements as to appointments and realignment of offices, dictated by the klan, may be expected soon. 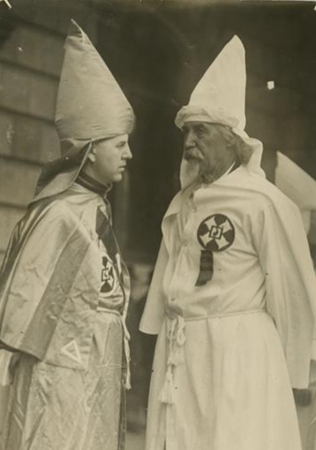 The “swapping of offices” and “filling of appointments” that the Denver correspondent suggested might happen were exactly what did happen in Denver and throughout the state. Governor Clarence Morley was in constant communication with Grand Dragon John Galen Locke. With many positions on boards and commissions already filled, Morley disbanded them (in the name of “government efficiency”), then created new boards or commissions that served essentially the same purposes, but now he was able to fill them with fellow Klansmen.

With the Klan clearly in power, members of the Invisible Empire felt much more comfortable revealing their identities. While robes and hoods were still par for the course, the Klan had arrived. Decisions and judgements might still be made in secret, but those who were proud of their Klan membership were comfortable letting the world know.

A writer for the Steamboat Pilot quipped that, “The [State] house is klan to the extent they sometimes carry their night shirts in a package with them so they will not have to go back home… when a [klan] meeting is scheduled for that evening.”

Representative Charles Bigelow proposed a bill which prohibited epileptics, drug addicts, drunkards, or persons charged with a felony from marrying. Marriages between Orientals and whites would also be barred in Colorado. Klanswoman Minnie C. T. Love introduced legislation which authorized the sterilization of epileptics, the retarded, and the insane if procreation might result in ‘defective or feeble-minded children with criminal tendencies..’

But Goldberg pointed out that not everything the Klan proposed was punitive, adding that “The governor ordered Klan members to support legislation establishing a minimum wage for women and outlawing working conditions detrimental to their health and morals.” The Klan wanted to give the Colorado Congress power to prohibit child labor. Representative Minnie Love advocated for the distribution of information on birth control as well as the manufacture and distribution of contraceptives. And Klanswomen from Pueblo and Denver introduced a bill that would allow women to serve as jurors. 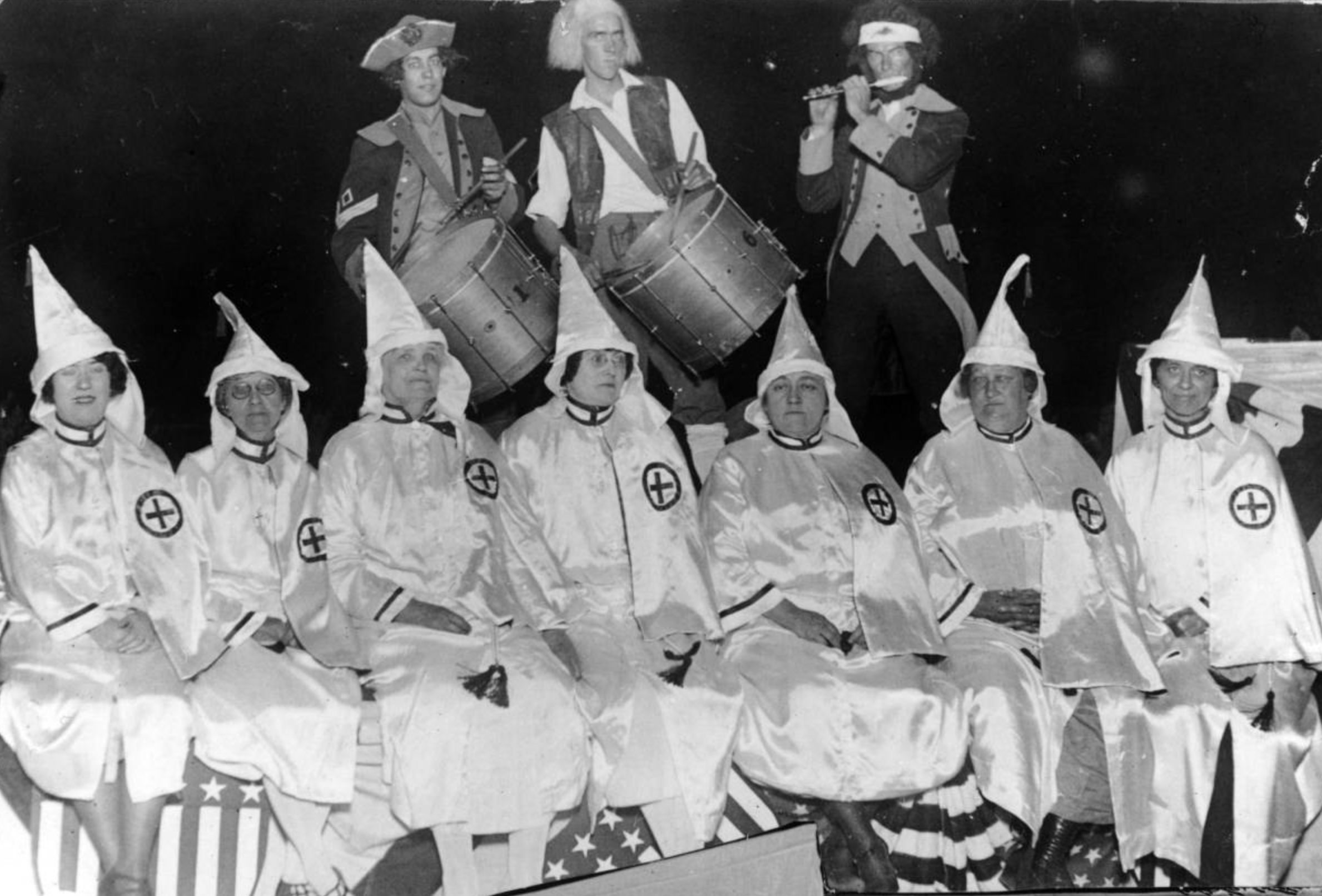 Despite the Klan’s sweeping victory in 1924, there had always been, and there continued to be, those who opposed the secret organization. Some loathed its racism and bigotry. Others focused on the secretive nature of the organization, arguing that decisions made by the government should be made in the open where the public can see and comment. Opposition to the Klan encouraged close scrutiny into Klan practices, blocked legislative activity when possible, and continue to provide alternative viewpoints through newspaper editorializing.

“One of the chief difficulties with this klan situation is that we have taken it seriously when we ought to take it as a huge joke. All that is needed to place the klan where it belongs in the limbo of foolishness is a realization of what a perfectly comical figure it cuts. When men who now think that patriotism consists in a masked hostility to Jews, Catholics and Negroes, come to see how utterly ludicrous they appear, they will acquire sense and become honest Americans again on their own accord. The kleagles and titans and cyclops and klaptrap must inevitably go the way of all such preposterous things. It Is true that it can do a deal of mischief in the meantime, but that seems to be inevitable. — Omaha World-Herald.” (as published in the November 19, 1924 Steamboat Pilot)

An inability to push through promised legislation began to demoralize the Klan. Raising support during pre-election rallies took a very different skill-set than pushing legislation through a political process that many of the newly elected officials had no experience with.

At the same time, many Coloradans who had swelled the Klan’s ranks prior to the election lost interest once the election was won. They felt they had done their part. The rest was up to the politicians they had helped to elect.

So at the same time that the Klan had reached a point of being mainstream, it also began losing its hold. This created an interesting few years where the Klan was both normalized, and without probably realizing it, already on the wane. 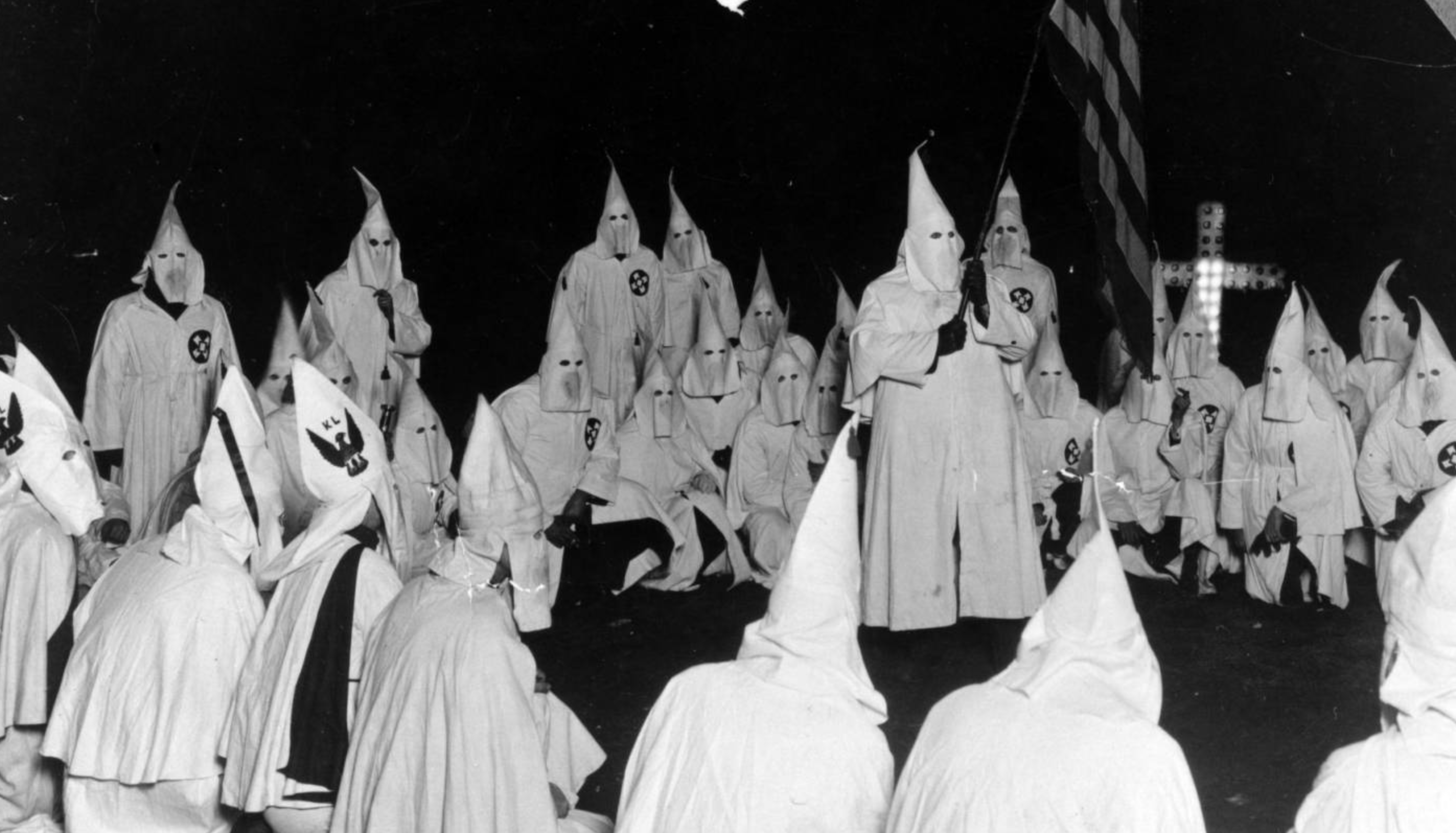 But what really signaled the beginning of the end for the power that the Klan held over Colorado was a split within the ranks of the Klan leadership. John Galen Locke was both Grand Dragon and founder of the Klan in Colorado. His charismatic leadership had galvanized and unified the K. K. K. in Denver in particular, but throughout the state as well. But in January of 1925, he and fellow Klansmen were charged with kidnapping and conspiracy. On January 6th, Keith Boehm, a 19-year-old East High School student and member of the Klan was kidnapped and taken before Locke who threatened to castrate the young man unless he “do the manly thing” and marry his pregnant girlfriend. The kidnapping charges made Locke an object of ridicule and some questioned Locke’s commitment to “law and order.”

In June of 1925, Locke was accused of failure to file tax returns for the ten years prior. In court he was also accused of having taken a salary for appointments to non-existant posts within the state government. Though Locke still had a host of strong supporters, this second legal entanglement was enough that the national headquarters decided it was time to recall Locke from his position of power over the Colorado Realm. Though Locke initially resisted stepping down, it was only a few days later that he filed articles of incorporation with the state for the creation of a new organization called the Minute Men of America. (Essentially he gave up white robes in order to don the costume of a revolutionary solider — including tri-corner hats and knee breaches, though most of the tenants of the new organization appeared to be fairly similar to the group he had just left behind.) 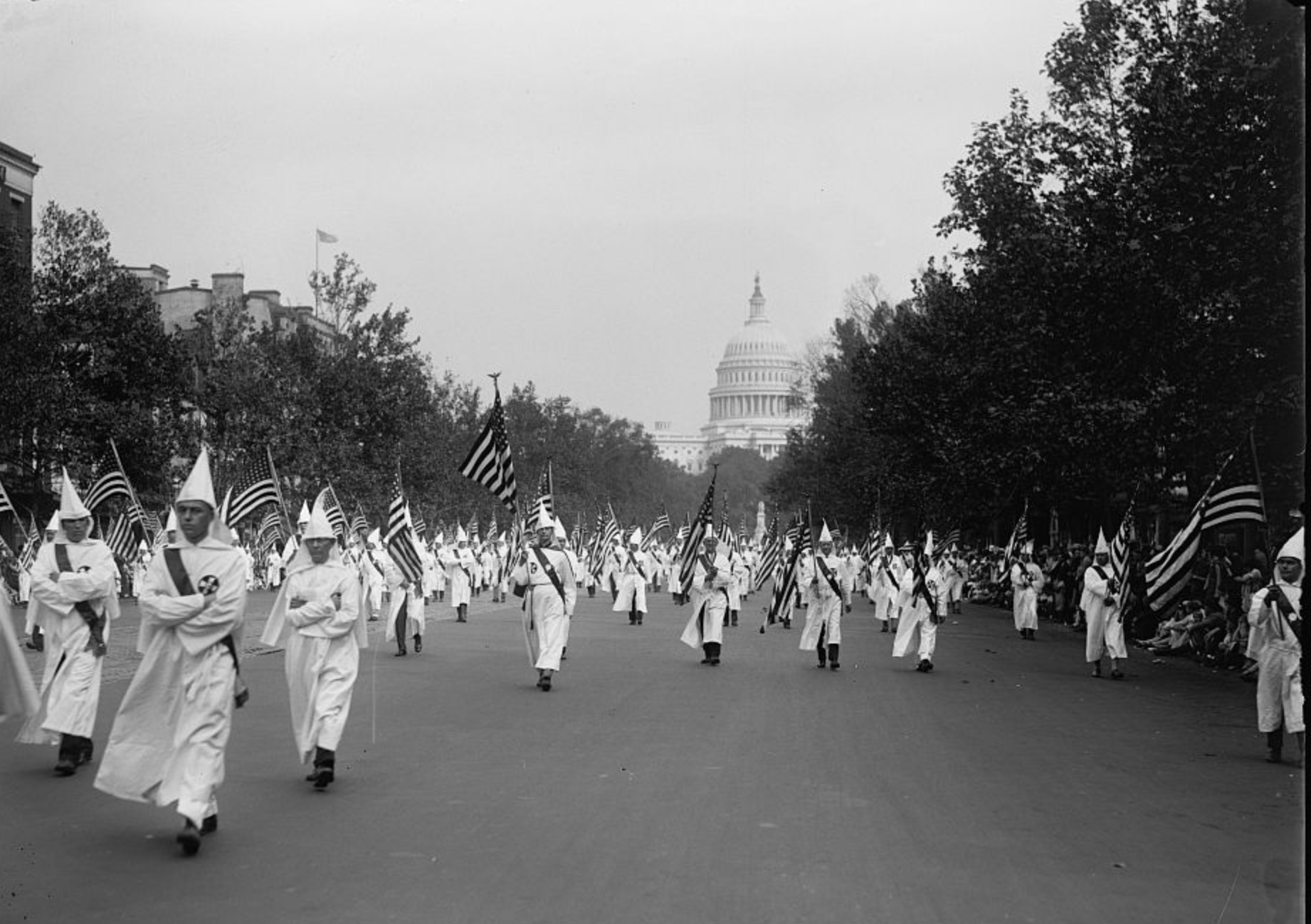 March on Washington in 1926. (Library of Congress)

With their dynamic leader now in charge of a new organization, 5,000 of Denver’s 17,000 Klansmen made the switch over to the Minute Men. Many others decided that the split was a good opportunity to stuff their robes into a corner of the attic and move on with their lives.

And yet, the Klan lived in. The locus of control swung away from Denver and landed in Canon City under the new Grand Dragon, Fred Arnold. There it remained as the Klan continued to lose power and influence until, in 1928, the leadership of the Realm shifted back to Denver. By that point all momentum was gone.

With the coming of the Great Depression, Klan membership fees became onerous. Membership continued to drop and new members were hard to come by. The Colorado Klan had become but a shell of its former self. But it didn’t die out. And several of the men who had gained power and political clout through the support of the Klan continued to serve the state. Their objectives remained largely the same, though the Hidden Empire was no longer in a position to support their activities.

Foundation for the Future

The Knights of the Ku Klux Klan had risen from non-existence in Colorado in early 1921 to having over a hundred thousand members by the middle of the decade. They swept the political landscape in the 1924 election and propelled several politicians into careers that lasted beyond the Klan’s own control. Though there were membership drives in the 1930s, the organization was unable to regain the level of power that it had once held. But it also has never died out. Catholics and minorities continued to experience harassment and boycotts through the 1950s. Though there was a resurgence of Klan activity in the 50s and 60s, the political wave that had taken over Colorado in the 20s was never repeated.

The image of a single Klansman in front of a fiery cross is from the Denver Public Library, Rh-595.

Robert Alan Goldberg’s book, Hooded Empire: The Ku Klux Klan in Colorado was my primary source for this article. There is a LOT of information that I wasn’t able to include due to space. If you have the time and interest, I highly recommend Goldberg’s book. He used many primary sources as well as interviews with former Klan members. (University of Illinois Press, 1981.) The book is available through the Poudre Public Library system and may be available through other northern Colorado libraries as well.

Newspaper quotes were accessed through ColoradoHistoricNewspapers.com.