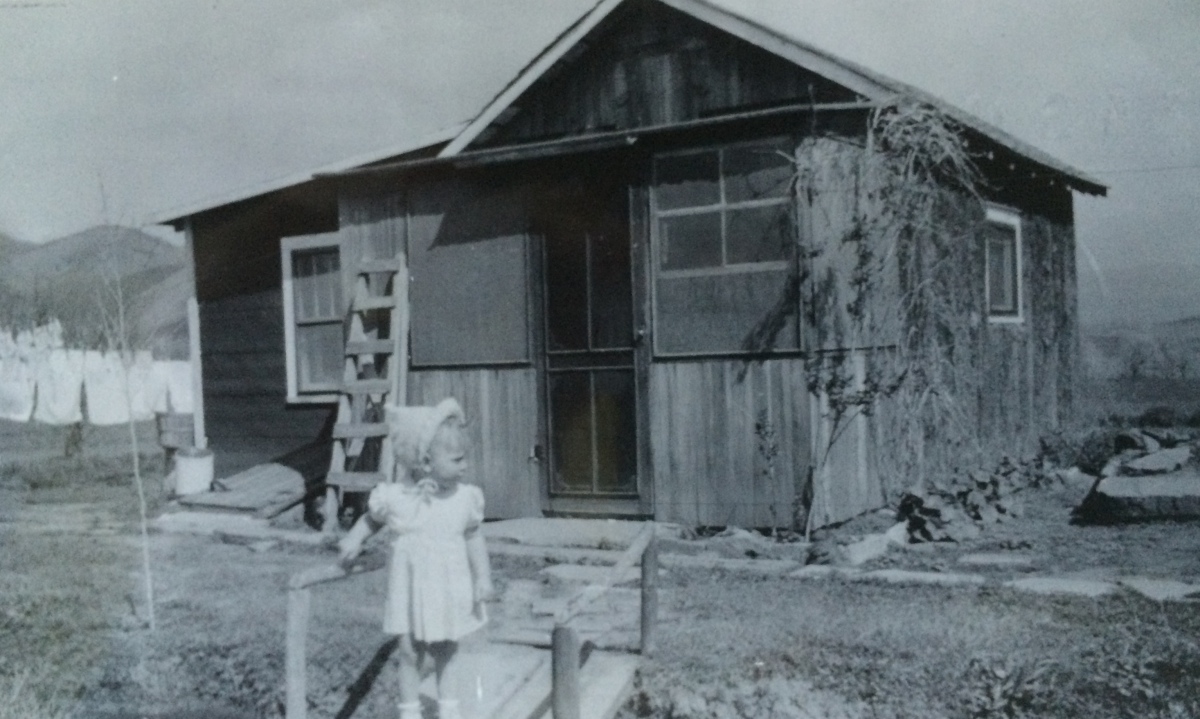 Barbara Delehoy Follett as a child.

Some time between 1910 and 1920, two different families traveled to northern Colorado from different parts of Nebraska. The Youngs settled in Laporte on a plot just across from Cache la Poudre school. And the Delehoys settled on some acreage in Bellvue (just slightly west of the midpoint between Bellvue and Stout). These two families were joined, through marriage, in 1936, when Marie Young married Victor Delehoy. I interviewed their daughter, Barbara, for this story. 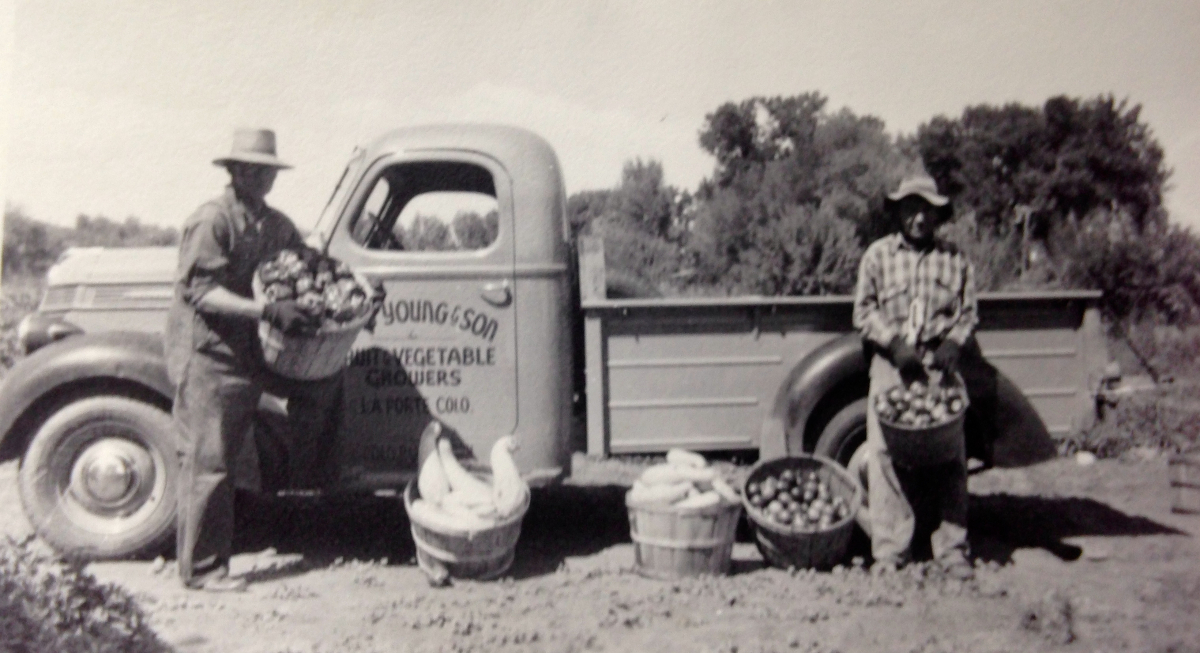 Ray Young with produce from his farm. He made deliveries in Stout (a small town that was located where Horsetooth Reservoir is today).

If you ever drove over to Laporte to see the penned deer or to buy fruit and veggies from the little shop across from the Cache La Poudre school, then you probably met Ray Young and his wife, Edith. Melville Ray Young listed himself as a fruit and vegetable farmer on his World War I registration card. He and his wife sold their produce in the little store that still stands today just across the road from CLP. They also traded with trappers that were passing through and in that way acquired pelts that they added to their collection of goods for sale. Ray and Edith had five kids: Thomas, Marie, Rachel, Florence and Alice. 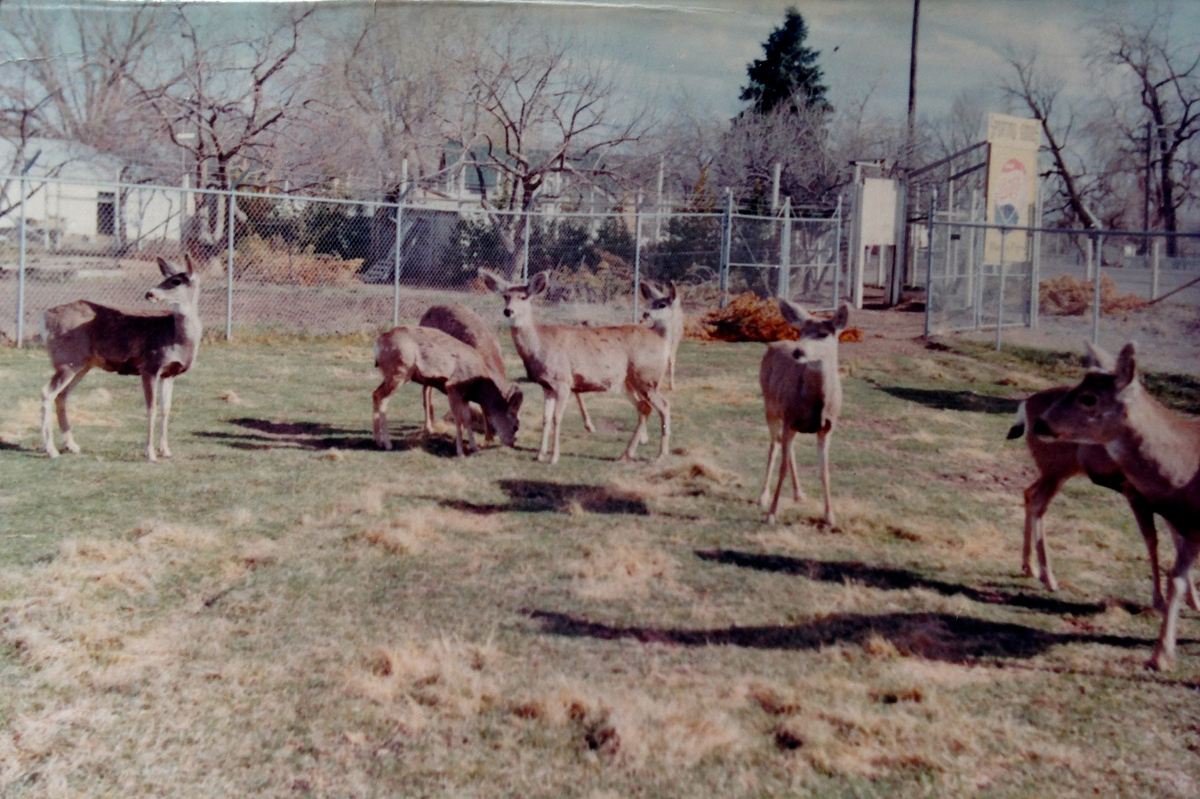 Deer in a pen at Ray Young’s place.

Ray got special permission from the state to keep deer in a pen as an attraction. People came from all over to see the deer. Ray even made a pet of one.

Ray’s son, Thomas Melville (who just went by his middle name like Ray did), helped to run the store. Melville had played for the Aggies on the football team under coach Hughes (for whom Hughes stadium was named). He fought in World War II, driving a tank through Germany. He bought some property just across the street from his parents’ place, to the west of CLP school. (If you look on Google maps, you can see Melville’s property. It’s the field to the west of the middle school). And he worked at the store until it was closed in the late 80s. 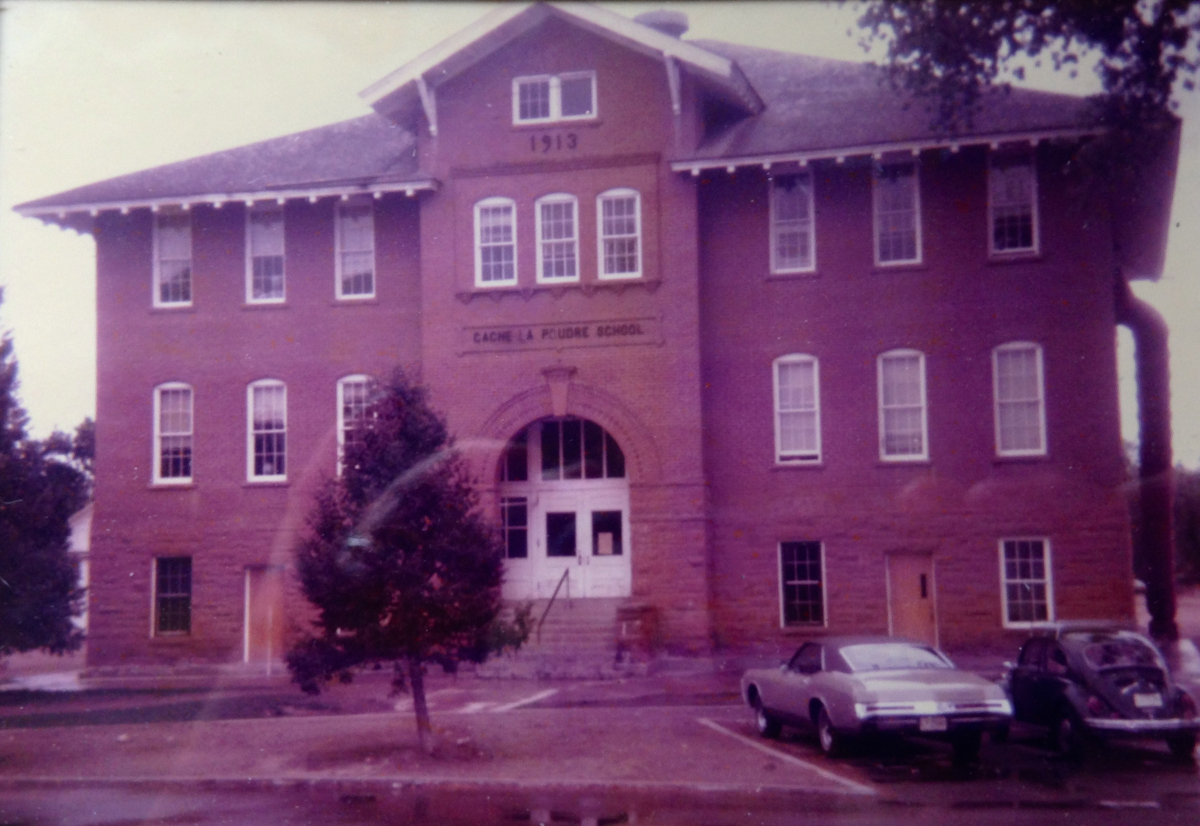 Cache la Poudre school
At one time this was a K-12 school. First and second grade met in a little white building next to the school, but grades 3 – 12 were in this brick building.In 1974, people felt that the building was getting too old to be safe. So it was decided to tear the old thing down and replace it. But the old girl was much sturdier than they had anticipated. They had quite a time knocking it down. (Ignore the reflection in the photo. That’s just me not taking a very good picture of a picture.)

Fred and Pearl Delehoy owned a plot of land almost half way between the towns of Bellvue and Stout. They and their six kids — Glen, Raymond, Alice, Victor, Reva, and Una — moved to Bellvue from Nebraska. Their son, Victor was seven years older than Ray and Edith’s daughter, Marie, but the pair met each other in school (since all the grades were at the one location) and they continued to interact through church. Eventually they fell in love and on June 28, 1936 they were married. They lived in a little two room house (We’d probably call it a shack today.) on Victor’s parents’ property. (See the photo with baby Barbara at the top of the post.) The little house was later sold and moved to where the road divides, just west of Bellvue near the Graves’ property. (The Graves run Morning Fresh Dairy.) 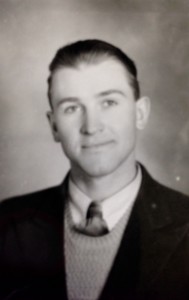 Victor and Marie eventually bought some property of their own in Bellvue. There they lived in a dugout house. Most of the building was underground with only windows and a roof sticking out. They had four kids: Barbara, Arlan, Keith and Gary.

One day when Victor was at a church meeting and Marie was doing the ironing, they heard a sudden uproar in the hen house. Leaving the kids in the house, Marie grabbed a shovel and headed out to see what was up. When Victor returned home from church he found a dead skunk. Marie had hit it so hard that she broke its back.

Their daughter Barbara also remembers a time when her mother yelled for all the kids to get in the house. It turns out there was a rattlesnake in the yard. Marie took care of that critter, too. 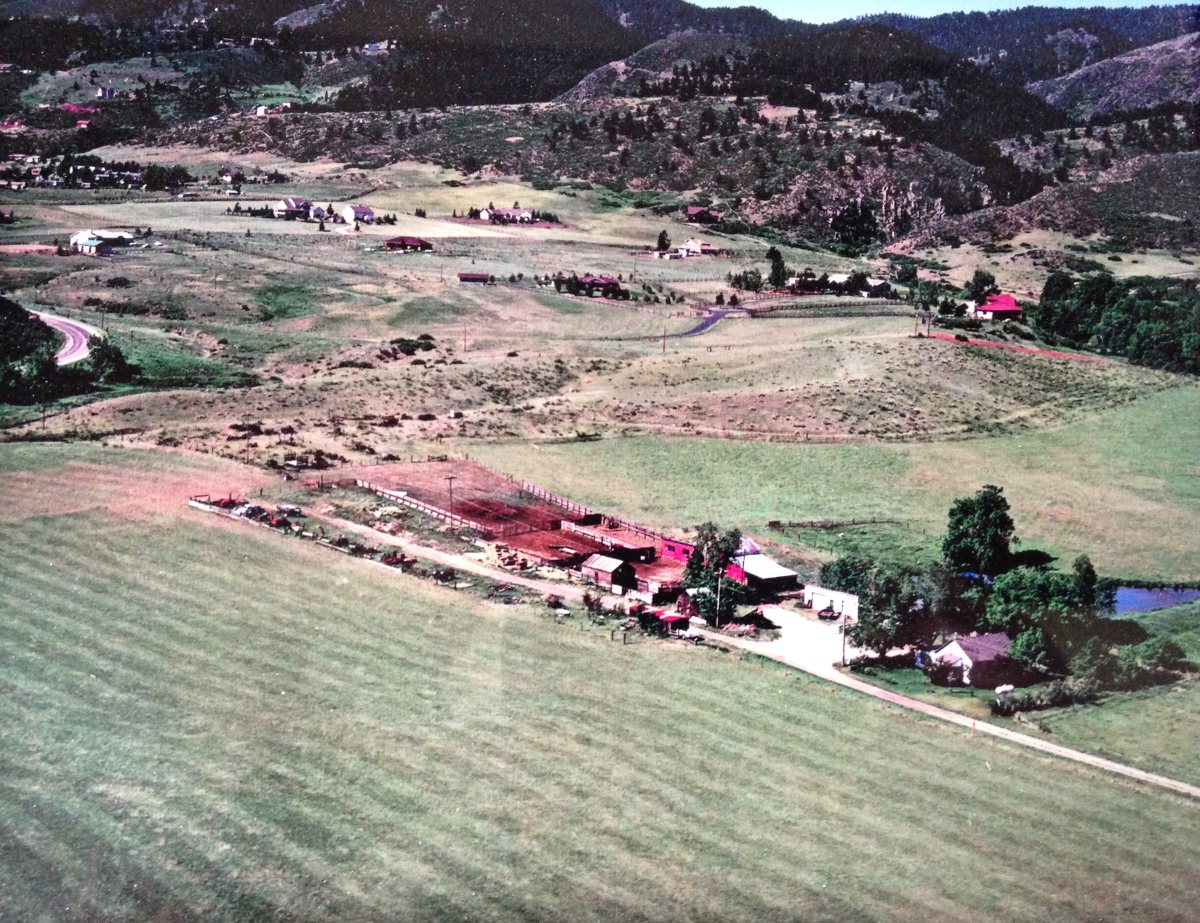 The Delehoy’s property in Bellvue. The main house is among the trees to the right.
(The photo was taken long after the property had passed on to new owners.)

When Fred and Pearl retired, they built a house in Bellvue, near the post office. Victor and Marie moved into the main house on Fred and Pearl’s old acreage.

Barbara says that growing up, the family grew all of their own food and butchered their own meat. They had a smoke house on the property as well as fruit orchards. In the winter they would go to the Greeley waterworks where they would cut out chunks of ice and bring them home to stock their ice house. They would store their food there and it would stay fresh through the summer.

Victor had rheumatoid arthritis, which kept him from being able to do much of the farm work. Marie would get up at 5 in the morning to do the milking. Once the boys were older, they would help out. 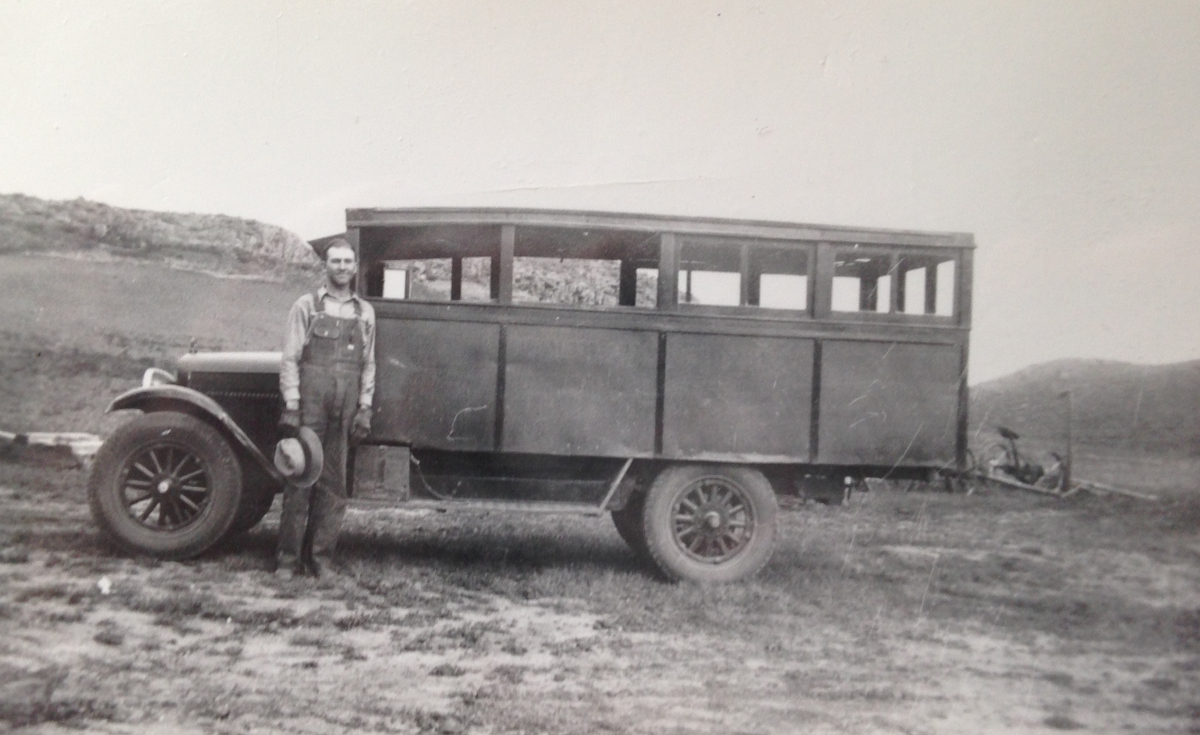 Victor drove the bus for 48 years, picking up students along the Poudre Canyon.

Victor became the CLP bus driver while he was still in high school. For 48 years he drove students up and down the Poudre Canyon to school and back. And in all that time he never had an accident. The Delehoys had a shed on their property where the bus could be stored when it wasn’t in use. 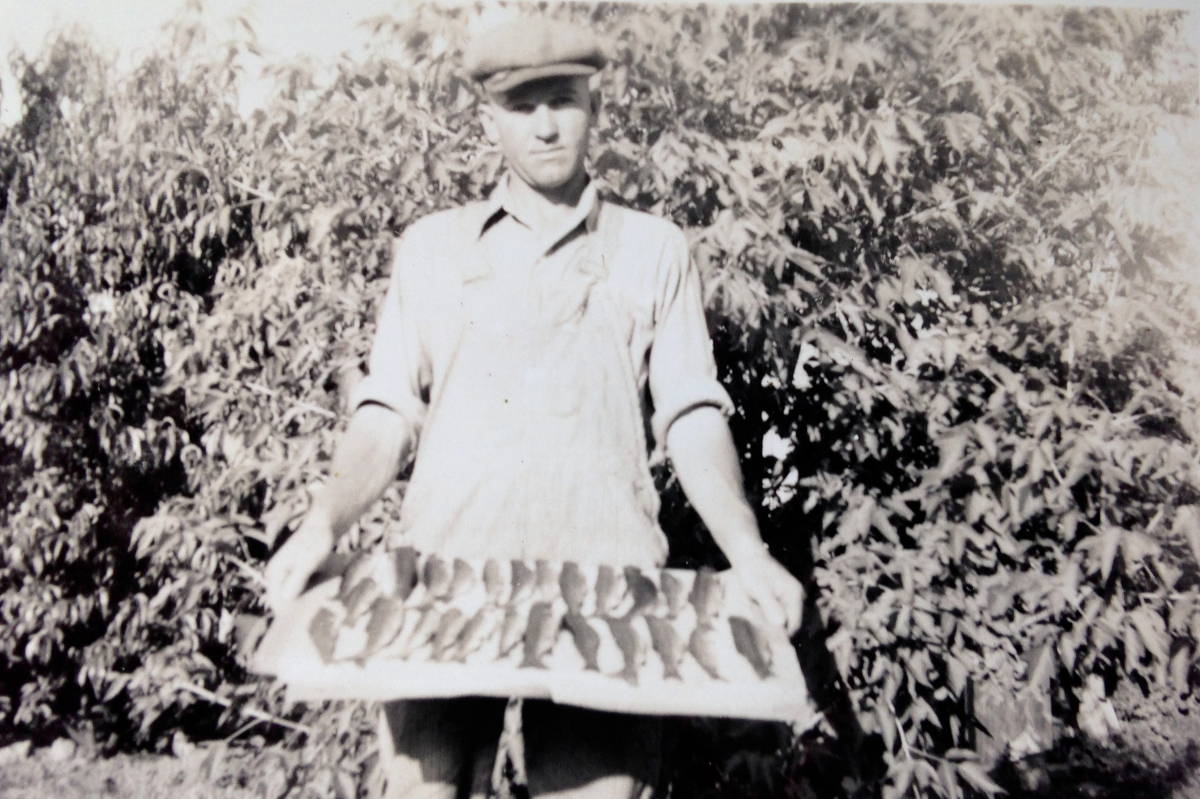 Victor Delehoy with his catch of brookies.

On Saturdays, Marie would often load up lunch and they would go up the canyon to fish.

The family eventually moved to a house just south of the Poudre river in Laporte (near where the long bike bridges are today). While Victor and Marie’s daughter, Barbara, was still in high school, the Follett family moved down from North Park and they brought their son, Hunter, with them. Hunter was a freshman at CSU when he and Barbara met at church. Hunter sang in the choir and played ice hockey on the river along with the other youth in the church. Over time, he and Barbara hit it off and before long they were an item. 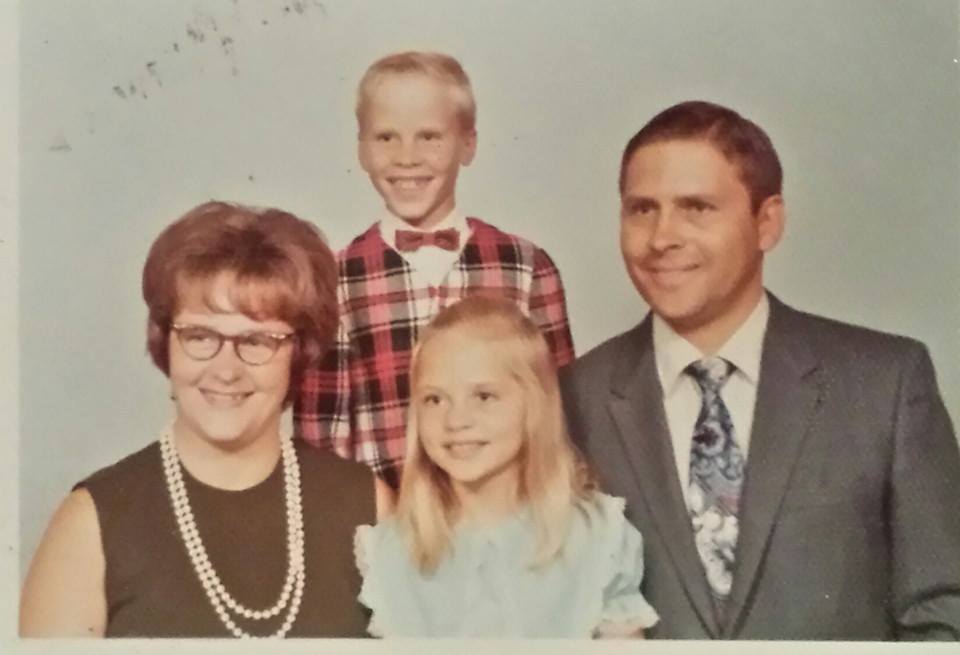 Barbara and Hunter Follett with their kids, Karen and Kevin.

After graduating from CSU, Hunter joined the army reserves. He served 9 months of active duty in El Paso, Texas. It was during this time that he and Barbara became engaged. In 1959 the couple was married. Hunter ended up moving back to Fort Collins and getting both his masters degree and his PhD at CSU. During that time he started the soils lab and water lab. But CSU has a policy that it won’t hire its own students, so Hunter taught in Ohio for awhile, then at Kansas State, before eventually securing a position back at CSU. To this day Hunter Follett is remembered at Colorado State University when the Hunter Follett Award is handed out to honored graduate students each year.

While living in Ohio, Hunter and Barbara’s son, Kevin, started to run in the school cross country team. Hunter started running at about the same time. As Kevin grew up, he continued to run. Kevin married Karen Kresie and they had three daughters, Katie, Kelsey, and Kirsten, all three of whom are also runners. Katie Follett (now Katie Mackey) is a runner for Brooks and was listed in the Coloradoan as one of the 10 greatest Fort Collins athletes of all time. 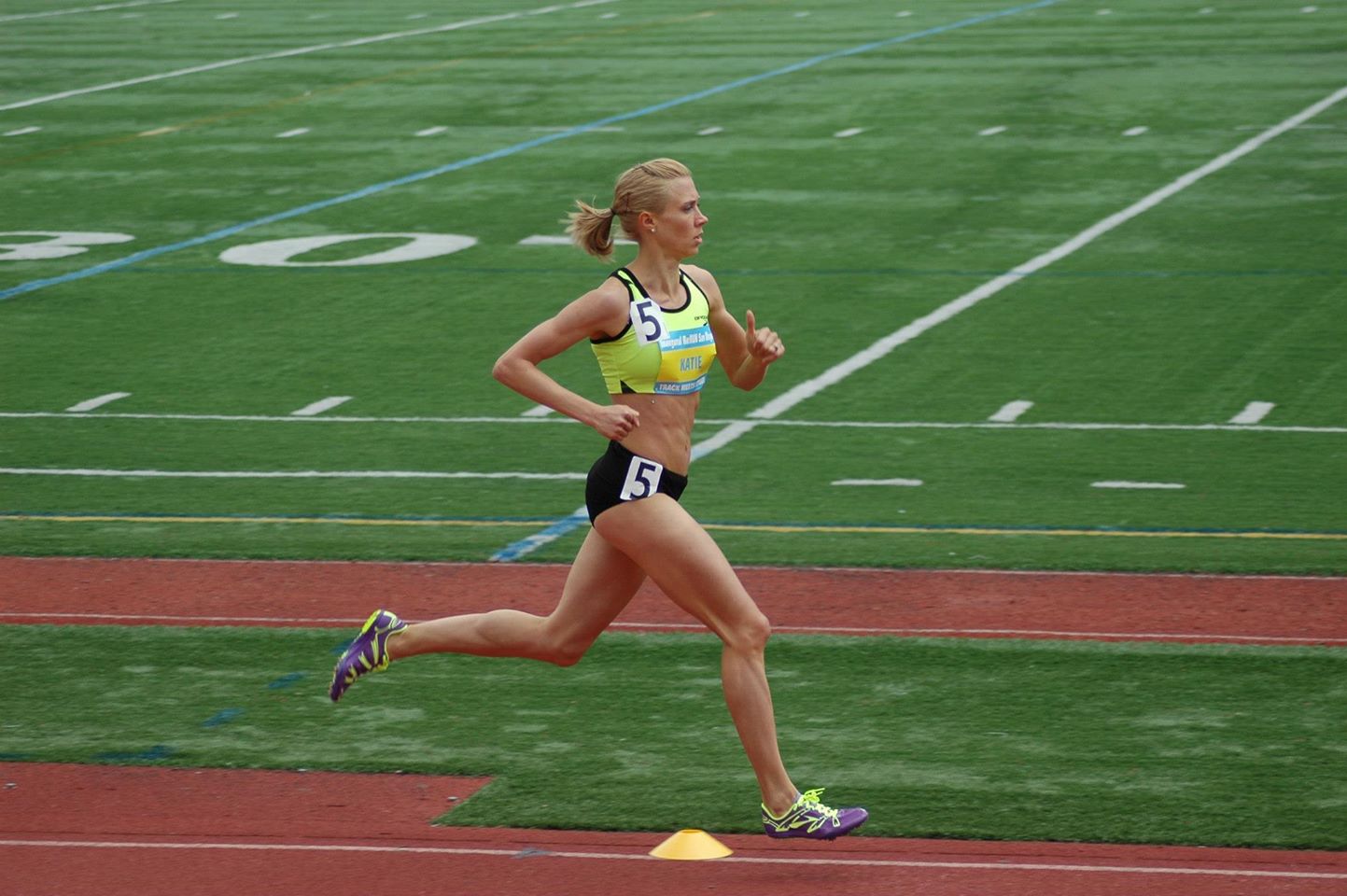 Since taking on this job as investigative history blogger, I’ve been checking out every area history book that I can get my hands on from the library. In everything I’ve read so far, I have yet to see mention of the Youngs, the Delehoys or the Folletts. They were just normal families doing normal things and going about their lives. Just like any of us. And yet their stories are an integral and important part of the history of northern Colorado. 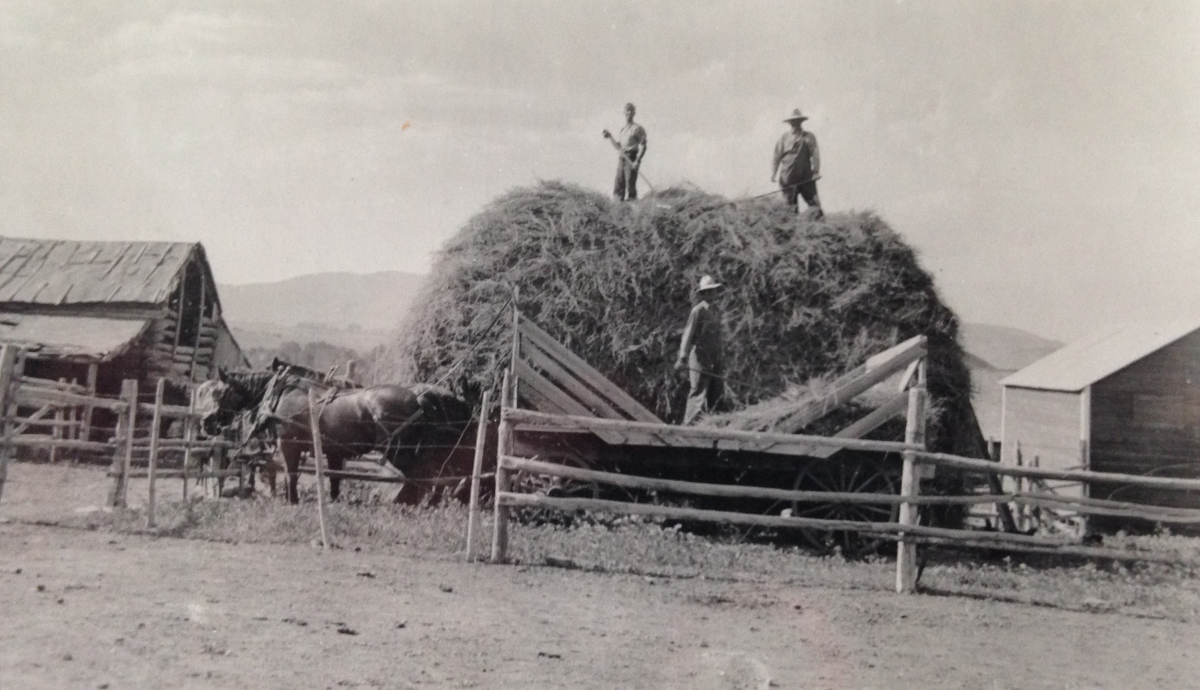 Every person from our region’s past played a part in where we are today. And every person in northern Colorado today plays a part in what it’s going to look like tomorrow. The three families I’ve written about here have flavored our community with the taste of hard work and a strong Christian ethic. They have played, and continue to play, an important part in the shaping of Northern Colorado.

Although I used Ancestry.com to kind of get my bearings (following a family’s story can get confusing without the roadmap of a family tree), I got most of this information, and most of the photos, from Barbara Follett and her son, Kevin. I did, however, snag the photo of Katie running from her Facebook page. Thank you, Folletts, for spending time with me and sharing your stories!