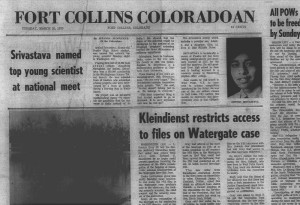 The top news story on March 20, 1973 was about a 16-year old Poudre High School senior (who was also taking some undergraduate and graduate classes at Colorado State University) winning the nation’s top young scientist award in Washington D.C. the night before. Arvind Srivastava placed first out of 13,000 high school seniors from across the United States. He won a $10,000 scholarship in the Westinghouse Science Talent Search which his mother said would enable him to attend Harvard. Arvind’s father, Jagdish N. Srivastava, was a mathematics professor at Colorado State University. The family was originally from Lucknow, India, but they moved to the U.S. in 1962. The project that helped Arvind win this honor had to do with an advanced mathematical theory regarding the possibility that the universe is finite and may be shaped like a doughnut. I tried to find a mention of Arvind online to see what became of him. He would be 57 years old now. But there are too many Arvind Srivastavases in the world to know which one was our own Fort Collins’ Arvind Srivastavas.

Also on the front page was a report regarding Watergate files. The United State Attorney General, Richard Kleindienst, had directed L. Patrick Gray III, acting director of the FBI, not to answer any questions regarding the FBI’s investigation of the bugging of the National Democratic Headquarters at the Watergate. Just over a month after this newspaper article was printed, both Kleindienst and Gray would end up resigning from their positions. 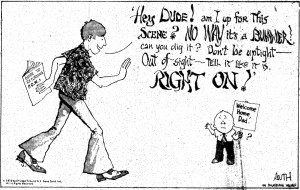 Returning veterans tried to fit in.

And the news in from Saigon was that all POWs were soon to be released. Though it didn’t entirely happen by the Sunday following this report as the newspaper had indicated, by March 29th the last United States soldier would leave Vietnam.

(I’m not entirely sure what the point of the comic was. Were the soldiers trying too hard? Were they given bad intel on how best to fit back into American society? Why is the kid wearing a suit? I haven’t a clue. But I love the 70s font, the 70s clothing style, and the 70s lingo. Right on!) 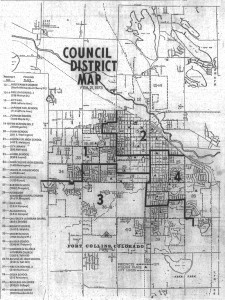 There were only four city council districts in Fort Collins in 1973. Click on the image to expand. Note that the city hadn’t grown much further south than Prospect (except a bit on the east side).

In local news, the Fort Collins High School principal of 5 years, Jack Hale, resigned in order to take on a superintendent position in Windsor. And the Lesher Junior High Principal, Earl Knox, proposed a change in junior high curriculum that would enable students to be more flexible in selecting their classes. Knox’s goal was to encourage students to try new things and do more exploration in junior high than they were currently able to do. The Lincoln Junior High principal, Jack Hubertson, said he hadn’t had time to look over Knox’s proposal because he and his staff were too busy with the planning of the new Lincoln Junior High School (now located on Lancer Drive off of West Vine).

Also in school news, it was announced that the second annual joint meeting of the district and local Parent Advisory Boards was to take place on April 2nd. There were several workshops that one could attend including one on whether the current athletic emphasis in the district should be changed. (Didn’t the present-day Coloradoan just run something on that a few weeks ago? I guess there’s nothing new under the sun, eh?)

And last but not least, we have some ads from the March 20, 1973 edition of the Coloradoan, including one ad for the Coloradoan itself. 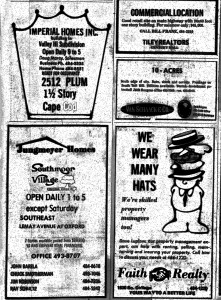 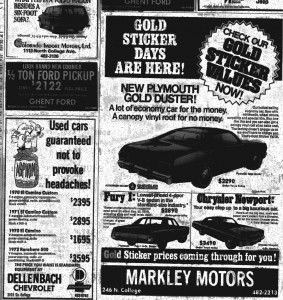 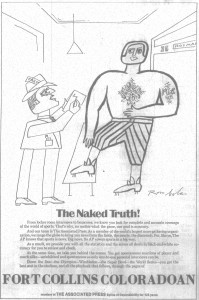 (I know these ads are tiny. Click on them to expand to a readable size.)

Information about Watergate related resignations thanks to Wikipedia.