A Healthy Place to Live

People move to Fort Collins for all sorts of reasons. But back in the 1800s, it was very common for people to travel west for their health. Asthmatics, consumptives, and others were told by doctor’s that they could either stay where they were in the east or midwest and very likely die or remain sickly through life, or they could travel to places like Colorado where they might have hope of improving their health and living a full life.

In this guest post by Linda Devers Iannuzzi, we get a glimpse not only of the improvements that Colorado weather made upon people’s lives, but a glimmer into the advertising industry that used such information to encourage even more settlers into the state. (Note how the pamphlet below encourages people to send a copy to their relatives in other climates by including the price of postage at the very top.) 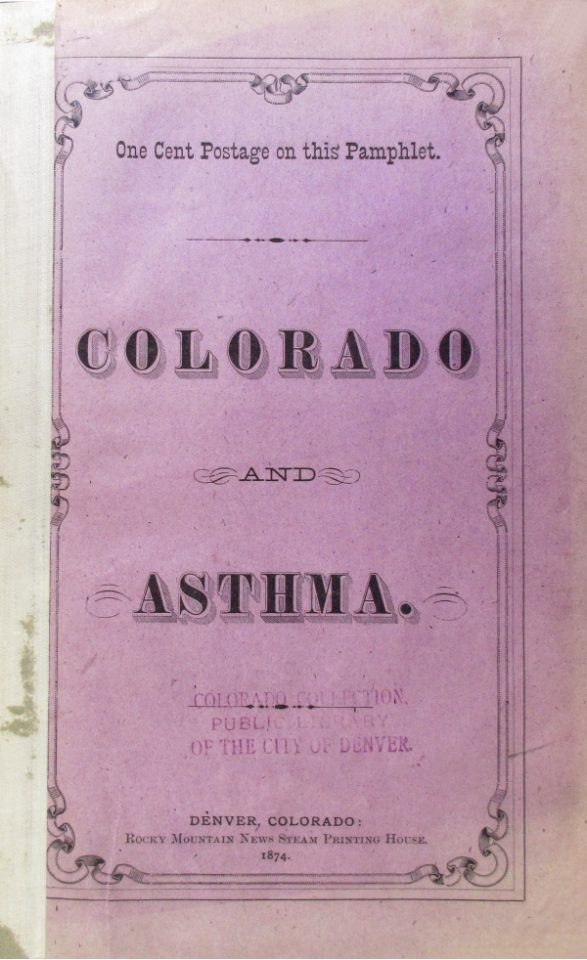 A few Denver men who suffered debilitating asthma before moving to Colorado got together and discussed their gratitude for the healing climate. They conceived the idea of finding how many other people in the Territory had experienced improved health and reduced asthma symptoms after moving to Colorado. In October 1873, a meeting of asthmatics was held and a committee formed with F. J. B. Crane, William B. Berger and R. W. Woodbury. The committee’s goal was to locate and interview asthmatics and find a way to distribute the valuable information to those still suffering symptoms.

The committee energetically interviewed Coloradoans living across the Territory from Fort Collins down to Pueblo. An extensive report was prepared and presented to Dr. W. H. Newman and Dr. Henry K. Steele, President of the Denver Medical Association. The doctors reviewed the information and approved publication of a 19 page pamphlet. “Colorado and Asthma” was printed and widely distributed by Rocky Mountain News Steam Printing House in 1874. The pamphlet containing over 110 interviews and the Denver Medical Association’s statement was mailed to other states and territories for one cent postage.

Charles H. Marsh and Clark Boughton lived in the Fort Collins area and shared their health experiences with the Asthma Committee. The published interviews are in block quotes.

C. H. Marsh,
La Porte, Col.; Michigan. My father had the disease, which developed itself in me in 1867; continued to increase, so that winter of 1870-71 I could scarcely walk to my office, (two blocks) and, of course, unfit to attend to business; left Michigan 11th April, 1871, and was so bad that I was obliged to lay over three times for rest; arriving at Greeley I lay down and slept through the first night, it being the first night’s sleep I had enjoyed in four months; in the winter was troubled at Greeley, and started for the foot-hills, where I found a cure; am strong and well; not a man in the region that can do more work than I can or that sleeps better nights.

Charles H. Marsh spent the summer of 1871 regaining health and strength, then traveled the rough rutted road to Denver, Arapahoe County, and filed his Michigan attorney documents with the Territory of Colorado Bar Association. He was admitted to the bar in September 1871, pledged an oath to the Constitution of the United States and the organized act of the Territory, and hung up his shingle in Fort Collins. A lawyer was not specialized in those days and his cases included probates, collections, conveyances, real estate transactions, coroner inquests and notary of public. He served as Fort Collins coroner in 1881 and 1883 and is listed in a History of Larimer County book as Justice of the Peace in 1885 and Judge in 1886.

Free from the symptoms of asthma, Charles H. Marsh practiced law into his mid-sixties and was active in the International Organization of Good Templars, volunteer at the Pleasant Valley School, Methodist Church Sunday school teacher, Chaplain for the Ancient Order of United Workmen, Odd Fellows member and Chairman for the Republican County Committee. Marsh, age 87 in 1922, died at his daughter Edith Marsh Hawley’s home in Fort Collins. 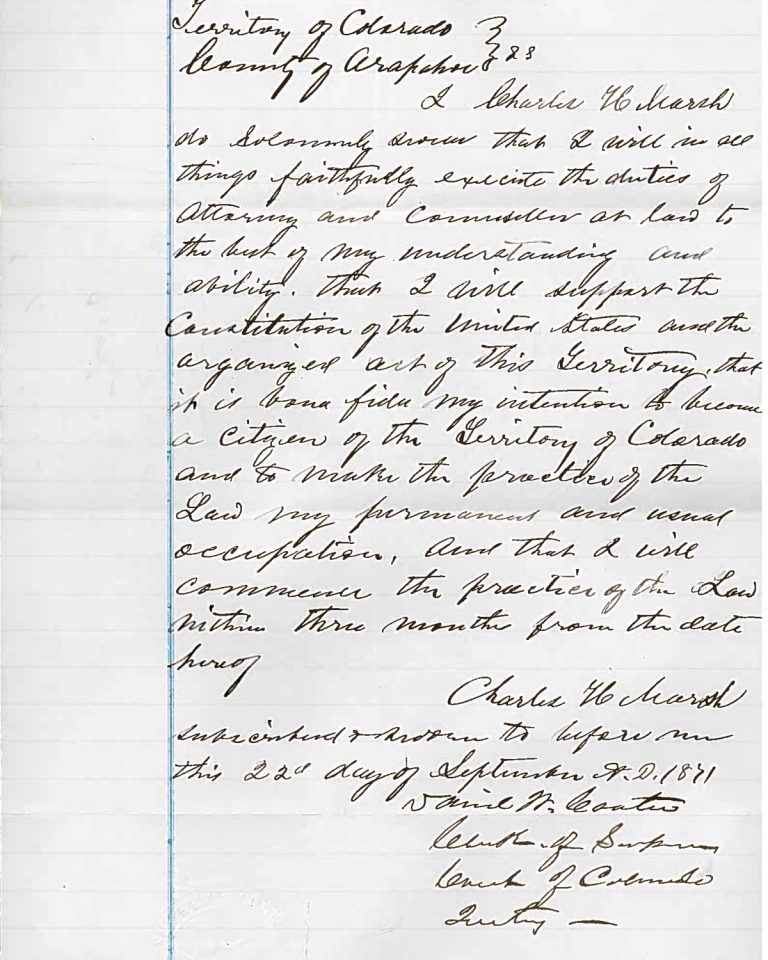 Clark Boughton,
Fort Collins, Colorado; Courtland, New York ; suffered from asthma more or less for twenty years; came to Omaha in April, 1872 ; grew worse there and for two months before coming here slept in a chair every night ; arrived in Greeley in July, 1873, but recovered so slowly that I concluded to try the mountain country ; after two weeks stay near Fort Collins was able to lie down and sleep, and have since enjoyed better health than ever before.

Clark Boughton recuperated at the Charles H. Marsh ranch located near the mouth of the Poudre River in Laporte. He contacted mountain fever and after recovering found no symptoms of asthma. In the fall of 1873 he was elected Larimer County Superintendent of Schools and enthusiastically organized the first Teachers’ Institute ever held in the county. He joined the International Organization of Good Templars, dedicated to preventing harm from alcohol and drugs, and was active in the community.

Clark Boughton’s health improved along with the ambition to work in printing and provide information to the public. In the spring of 1874 he fulfilled his lifelong dream and established his own newspaper, the Fort Collins Standard. He wrote articles on the beneficial effects of Colorado climate and published his thoughts and suggestions on how to recover health.

Driven by determination he worked fourteen hour and longer days, week after week until totally collapsing. His greatest concern was that the Standard should continue with a writer who shared his hopes and efforts. Clark Boughton withdrew from the newspaper and died quietly at the age of twenty three. His lengthy obituary was published in the Fort Collins Standard October 28, 1874 and concluded with “He never did a mean thing.”

Charles H. Marsh and Clark Boughton are two of the many people who sought relief from debilitating Asthma symptoms. Some found greatly improved health in Colorado and lived long productive lives while others were not as fortunate. 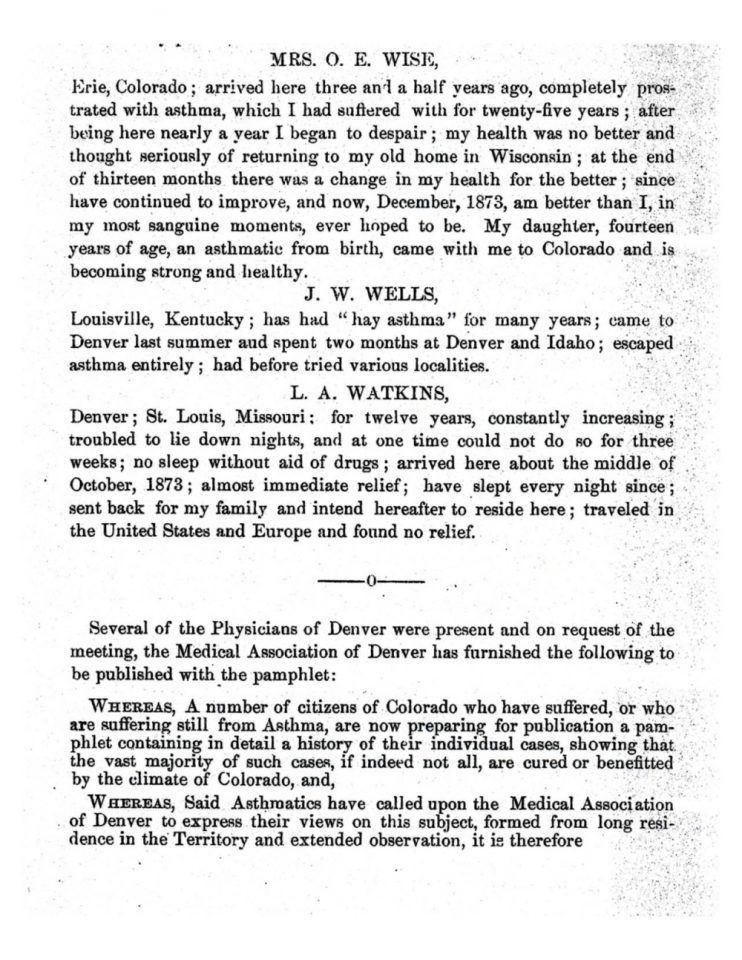 Page 18 from the Colorado and Asthma pamphlet. 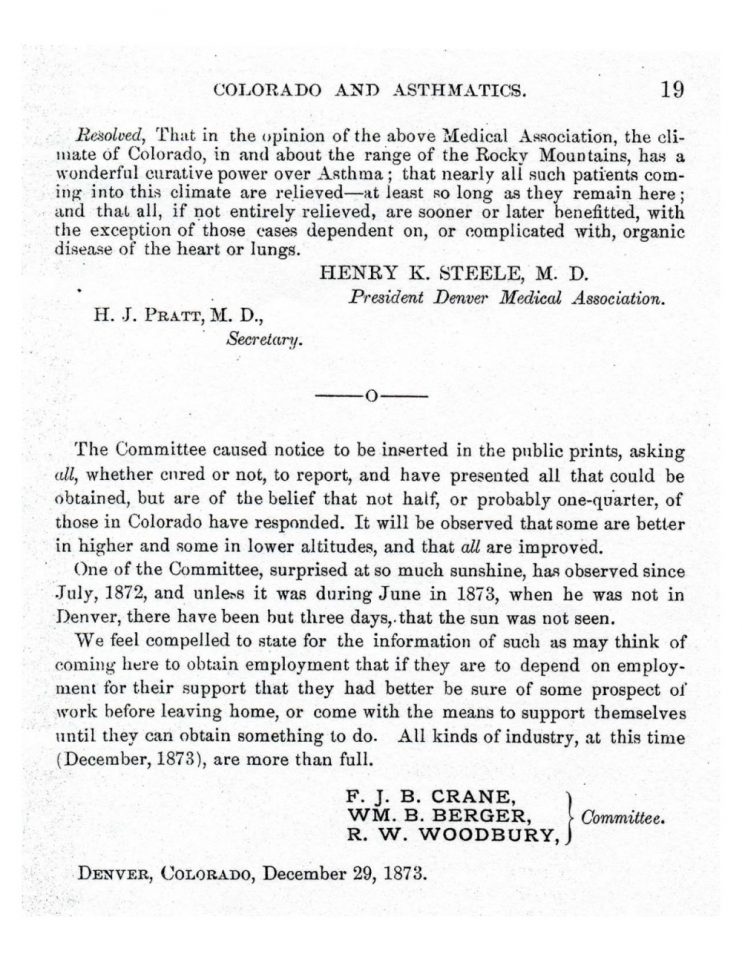 Page 19 from the Colorado and Asthma pamphlet.

Sources for the article:

Charles H. Marsh’s hand written oath to the Constitution of the United States and the Territory of Colorado was obtained from Colorado State Archives, ID#311282, Archive location 41313.

Information on the lives of Charles H. Marsh and Clark Boughton was found at coloradohistoricnewspapers.org in numerous Fort Collins articles. 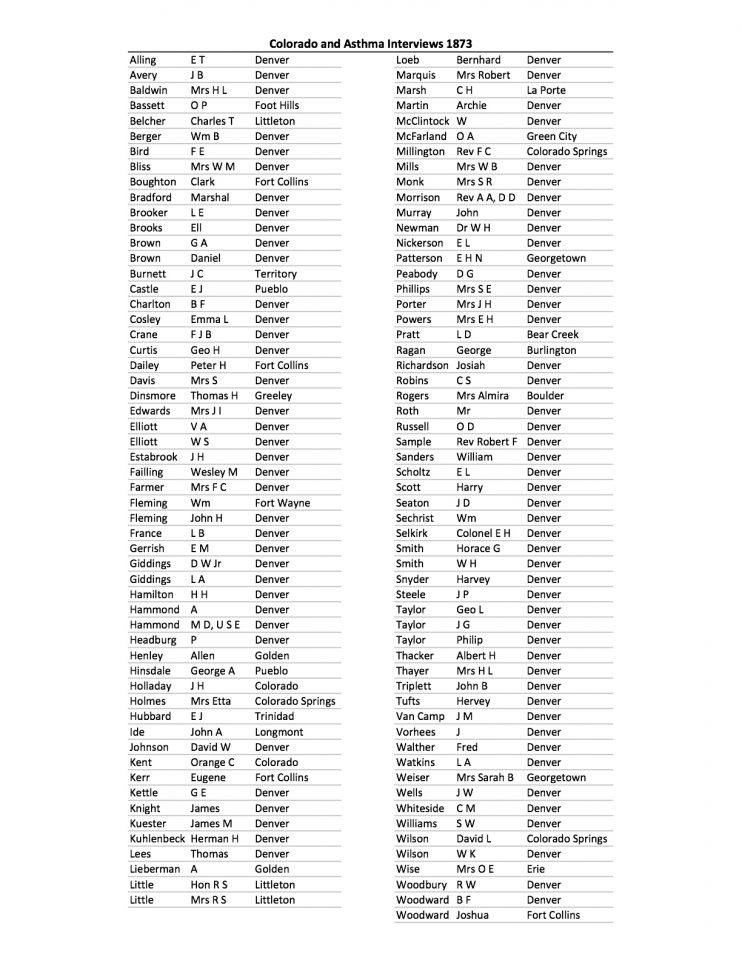 A list of those interviewed who had previously suffered with asthma.