Snippets from Myron Akin’s Journal the Year He Became Mayor 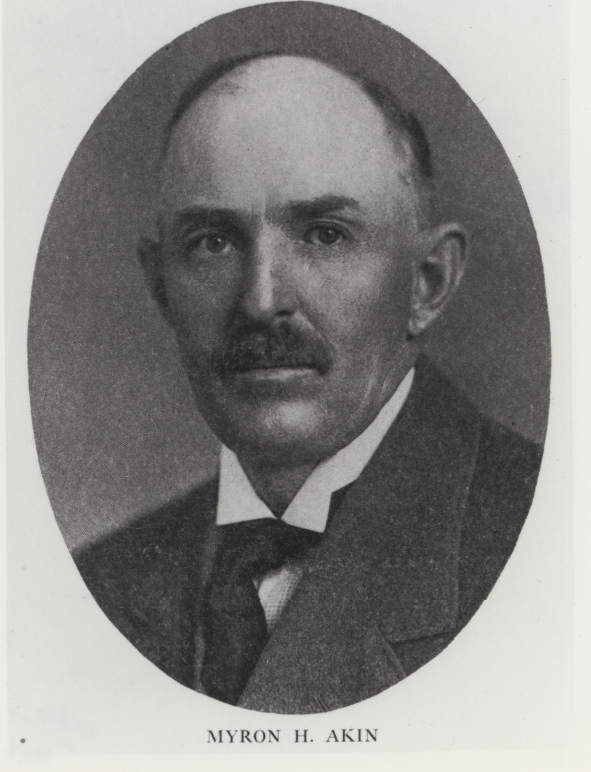 Myron Akin was the 16th mayor of Fort Collins.

Myron Akin became the mayor of Fort Collins in 1909, at the age of 52. He was chosen specifically because of his “anti-license” stance, which meant that he was against the city offering liquor licenses to saloons within the city limits. There were two “parties” that ran in the election, the Anti-License side and the Independent side. Akin won by only 4 votes, showing that Prohibition had a somewhat tenuous hold upon the city’s residents.

Akin’s great, great niece, Joan Day, has many of Myron’s old journals in her possession. They’re small little books, about the size of an iPhone, that would easily fit into a jacket pocket. So there’s not a lot of room for extravagant details or reams of emotion between the pages. But there are occasional little snippets that are really interesting, and that show a different side of the story than what you can read about in the newspaper. 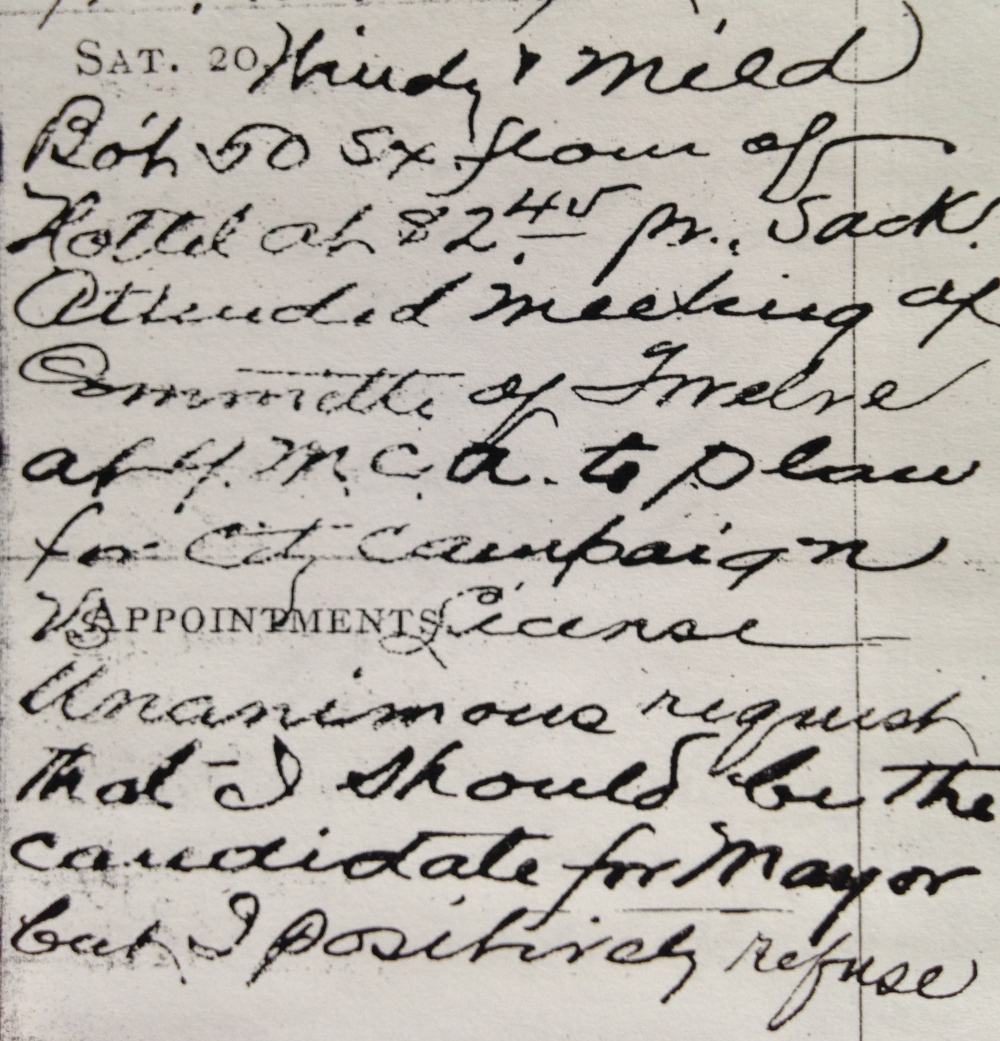 Myron Akin was apparently not all that thrilled with the idea of being mayor. This is the February 20, 1909 entry in Akin’s daily journal. The last line reads, “Unanimous request that I should be the candidate for Mayor but I positively refuse”.

During the months leading up to the spring election, Akin wrote about anti-license activities that were taking place (primarily a campaign to keep the licensing of saloons from happening). Three times he writes in his journal regarding his adamant stance against running for mayor. Four days after he wrote his last protestation, his entry reads…

Something must have happened between March 16th, when he wrote, “Again refused to be candidate for mayor” and the 20th, when he was unanimously selected in the primary election. It’s possible that other members of the Anti-License party simply wore him down. Or perhaps the fact that they unanimously agreed that the candidate should be him was enough to convince him to run.

You’ll note that there wasn’t a great deal of campaigning going on. Up until 4 days before the primaries, Akin was protesting running for the office. Between the primaries and the elections, I couldn’t find a single advertisement in the newspaper for either candidate.

The closest I could find to a campaign ad seems more likely to be a newspaper editor’s attempt to be a little punny.

Akin’s journal also gives a glimpse into the lives of Fort Collins residents in 1909. He was sworn in as mayor on April 19th and it appears that one of his first actions was to issue a proclamation announcing Mother’s Day (which had only just started three years earlier and had only been celebrated in the city once before).

Within a month and a half of taking on the office of mayor, Akin took a 3 month vacation to “The Lakes.” He traveled back to Fort Collins a few times to take part in city council meetings, but for the most part he spent the summer building and mending fences at the cabin, fishing, picking gooseberries, and visiting with folks. When he came back to Fort Collins, he’d mention that he spent time picking cherries. He occasionally referred to ponies or bulls (buying and selling livestock and land were his two main sources of income), but the references generally described some other person doing the work. 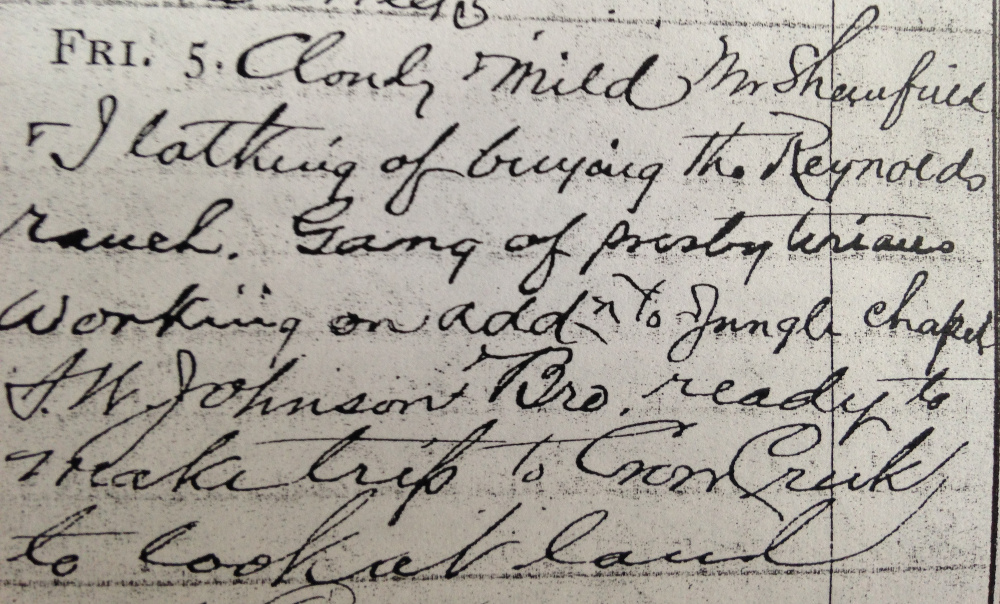 Myron and his wife Elizabeth were both involved in helping the people in the “Jungles.” These were the neighborhoods northeast of the river — Andersonville and Buckingham — where Russian-German immigrants lived. The entry above is from March 5th, before Akin was elected mayor. It reads, “Cloudy & mild. Mr. Sheffield & I talking of buying the Reynolds ranch. Gang of Presbyterians working on addn to Jungle chapel. J. W. Johnson Bro ready to make trip to Crow Creek to look at land.”

There were several entries in the journal that mentioned activities that Akin did with his kids. They often walked to prayer meetings together, he attended their school events, and in the summer, he spent a lot of time with his son, Wayne, working on various projects around The Lakes.

Sat. June 12. The Lakes. Pleasant. Showery in pm. Wayne & I commenced repairs on cabin above the house by tearing down old bunks used by men under John Riddle during building of inlet to Twin Lakes.

Tues. June 15. Showers in pm. Wayne & I finished the cabin & are now prepared for visitors. Talked by phone with Mr. Summers who is at Livermore with wire.

Though Akin’s journal entries aren’t particularly poetic, nor do they give all the details that a historian might want, they still hold nuggets of information that help build a context for the time and “feel” of Fort Collins in the early days.

Even the journal itself gives hints about the time period. The first page of the book is an information sheet that the holder of the journal can fill in with information. It includes such details as what make of bicycle the person owns (Did everyone own a bike back then for this to be an important detail to include?), what size of hat, gloves, hosiery, etc. they wear (Really?!!  That really needed to be included in a daily journal? Egads!), and even the number of their bank book.

Small journals like this were very popular at the time and I’ve heard from other people that their grandparents and great grandparents kept journals as well. These can provide a wonderful looking glass through which to enjoy the day-to-day lives of people over a hundred years ago. They provide a portal not only to see how much the world has changed, but also how much it’s stayed the same. We may no longer keep little books in our jacket pockets upon which to write who we saw or what we did today. But then again, isn’t that exactly the kind of information we post to Facebook? There’s something about keeping track of the little details in life that somehow comforts us. The difference is that today we can broadcast those details to the whole world.

The top photo of Myron Akin is from the Fort Collins Museum of Discovery Archive – H10046.