Today’s guest post is essentially an advertisement for a sleep website. (I’m not getting paid to post this here, but the guest blogger makes money through the sleep website that she runs with two other people.) I’ve agreed to post the article to the site because, despite the fact that it’s an ad, I still found it to be interesting. I hope you do as well.

The conceit for the article is a discourse on what it was like for the early trappers, traders, and settlers to sleep at night. To see an example of a pioneer bed, check out this article in the Rocky Mountain Collegian entitled, “The Fort Collins Museum of Discovery presents living history with Culture in the Courtyard.” I don’t know if the bed shown there is the actual bed of Antoine Janis. I rather doubt it as he likely would have taken it with him when he left the area in 1878. But it is located in Antoine Janis’s cabin today. 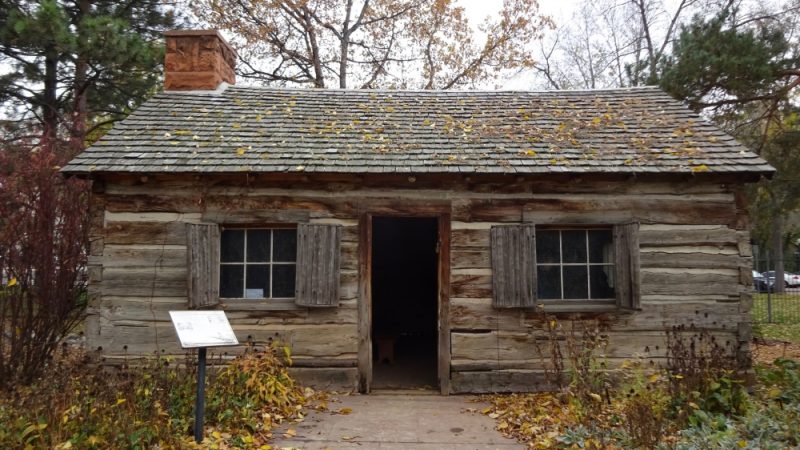 Antoine Janis’s cabin as it looks today in Heritage Courtyard in Library Park.

The life of a pioneer was one of great deprivation. We all know this. But have you ever stopped to really think about how those on the frontier got by in such tough conditions without any of the things we take for granted today?

The luxury of modern ‘soft’ toilet paper, for instance, wasn’t invented until 1907. Until then most settlers made do with dried leaves or old newspapers. Not a pleasant image for you but one that illustrates my point.

If you’ve ever visited Antoine Janis’s cabin near Fort Collins, you will have witnessed firsthand just how spartan the life of a pioneer was. And this structure is from his more settled older days. Imagine what he had to make do with when he was first taking to the trail as a scout!

Take your bed, for instance. Even if the lovely memory foam mattress that lulls you to sleep every night had existed, there’s no chance it would’ve fit into a wagon. And when Antoine was first starting out, he was often going where no wagon had been before; so his only possessions were what he could fit on his back.

What pioneers slept on out on the frontier was, as you can imagine, far from the height of comfort. While some families with the manpower and money would haul featherbeds and pillows out to their new home, the majority had to make do with what they could fit in a single wagon. And that didn’t exactly stretch to a four-poster.

The earliest pioneers were, of course, wayfinders like Antoine – going where no wagon trails even ran. For them the prospect of hauling a bed was logistically impossible. The solution was to fashion their beds from what nature provided for them. A bed would be little more than packed dirt onto which a pile of leaves would be arranged as a rudimentary mattress.

A story that has been passed down from one pioneer tells of one of the perils of these leaf-based mattresses; claiming during a particularly hot spell he had left the cabin door ajar through the night to let in a breeze. After he awoke, he was shocked to see that he had attracted an unwanted bed mate – as a large copperhead snake slithered out from amongst the leaves.

As time moved on, some early settlers upgraded from leaves to what became know as a ‘sleeping shelf’. These crude constructions basically consisted of wooden planks laid over poles or pegs hammered into the walls of the cabin. While these bare boards provided little in the way of comfort, they did keep the sleeper off the cold floor and away from rodents and snakes.

How they tolerated such sleeping conditions is hard to fathom. The pioneer life was hard. That said, as the vast majority of a settler’s life involved backbreaking manual labour from daybreak to sunset, they were probably delighted by whatever form their bed took.

What’s more, beds in the beginning were simply not a priority. When pioneers first found a spot to settle and call their own, they had to take care of a few little tasks before they could get to homemaking, such as, well, making the actual home. As in finding wood and raising four walls and a roof. Then came the less-than-simple tasks of digging wells and outhouses, planting crops, and tending to livestock.

With those tasks under control more enterprising homesteaders began to stuff their own mattresses, making use of materials readily available on the frontier – buffalo hair and prairie grass being two popular choices.

These homemade mattresses would be placed on wooden frames with ‘bedsprings’ fashioned, not out of wooden slats but of tightly stretched topes. These ropes would be tightened frequently when the bed began to sag too much; maybe this is where the common phrase ‘sleep tight’ comes from!

Only when sustainable communities began to come together did carpenters arrive to set up shop; and with them, the wooden framed and slatted beds more recognisable to us today. Until then, having a bed would be something of a status symbol – as Mrs. John Barry, an early settler, reported in a letter to a friend back east:

“Oh, you who lounge on your divans and sofas, and sleep on your fine luxurious beds know nothing of the life of a settler! Here we are sitting on a pine block, a log, or a bunk, sleeping in beds with either a quilt or a blanket as a substitute for sheets. I can tell you it is very aristocratic to have a bed at all.” — Mrs. John Barry, settler

So the next time you complain about a lumpy mattress, maybe count yourself lucky that you’re not a pioneer like Antoine Janis or Mrs. John Barry – and that your bed isn’t a pile of leaves on the ground or a prairie grass-stuffed mattress.

That said, catching a good night’s sleep still isn’t easy for the majority of us today, for very different reasons. In fact, 1 in 3 modern Americans suffer from a sleep disorder at some stage in their lives. For help on how to get a good night’s sleep check out the advice on the Sleep Advisor blog. You’ll certainly get a more comfortable rest than those poor pioneers!