Creating a Vibrant Local Economy: an Authentic Sense of Place

Do you remember the story of the Velveteen Rabbit? It’s the tale of a stuffed bunny that was so well loved by the child that owned it that the toy became real. Something similar happens with the buildings and spaces around us. The built fabric of our world, whether structures or spaces (streets and parks), are like clothing that we place upon the land. But it’s in our using these buildings or spaces — working in them, living in them, falling in love in them, raising our kids in them, and growing old in them — that infuses these man-made spaces with an authenticity that really brings them alive. And it creates an emotional bond between people and place that connects residents to a geographic location.

A couple of decades ago, Gallup discovered that when people feel attached to their workplace, the overall productivity of the business increases. In 2008, the Knight Foundation and Gallup joined forces to engage in a three year study to see if there was a similar relationship between residents’ feelings of connectedness to a place and the economic vibrancy of that community. They found that there are ten community attributes that residents tend to find important in order to connect to the places where they live, but three of the attributes rose to the top as being most significant in the twenty-six cities that were surveyed: Social Offerings, Openness, and Aesthetics. (The other seven, in order of importance, were: Education, Economics, Leadership, Basic Services, Safety, Social Capital, and Civic Engagement.) And the more attached residents felt to their community, the greater the level of growth in the local GDP. 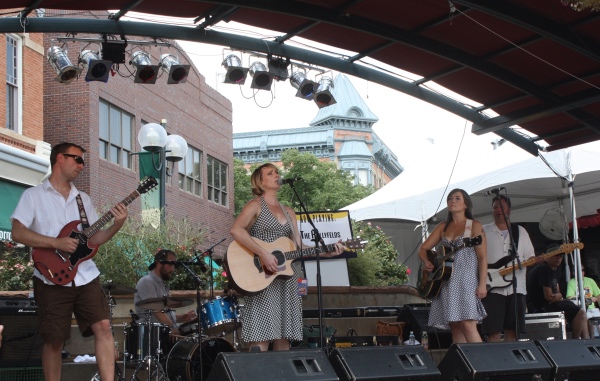 Social offerings, such as a variety of creative events held downtown throughout the year, help to attach residents to their community.

Fort Collins has never lacked for social offerings. In the earliest of newspapers there are stories of residents gathering together for dances, dinners, and religious services. And today, the events calendar put out by the Downtown Business Association is so packed that I have heard complaints of “event fatigue” from businesses and residents alike. So it seems that we definitely have this important attribute covered. But it might help if, as a community, we started to tweak our social offerings so that they’re not all mainly happening in Old Town. This is beginning to happen with events at the Gardens on Spring Creek, Jessup Farm, and hopefully soon at the newly renovated Foothills mall.

According to the Soul of the Community study that the Knight Foundation and Gallup put together, openness means, “How welcoming the community is to different types of people, including families with young children, minorities, and talented college graduates.” Fort Collins has historically been a fairly homogenous town with an often ignored minority sub-culture. This is hopefully beginning to change, although the recently released movie, “Fort Collins, Choice City for Whom?” certainly challenges this assumption. Of the three most important drivers that have been found to connect people with the city in which they live, this is probably one that Fort Collins is weakest in.

Aesthetics is another area that I think Fort Collins is pretty strong in… at least in certain parts of town. Our beautiful location along the Front Range puts us in good stead. We have well managed parks and open spaces. And added amenities such as flower planters, landscaped medians, and even the winter lights downtown add to the sometimes magical feel of our community. All of these bits of beauty throughout our city do take a toll on the City’s general budget, but given that aesthetics is one of the top three drivers of connectedness and economic growth, it’s probably money very well spent.

Where do small businesses fit into this picture?

The Institute for Self Reliance has found that in communities with strong local business economies, the ownership of businesses within the community tends to be more diverse, with more women and minorities being represented. Tying this together with the Soul of the Community study, we find that in cities where small, locally-owned businesses are able to grow and thrive, more people, including those who are often marginalized, feel emboldened to become entrepreneurs, finding creative ways to support their families and, in turn, strengthen local economies through a diverse offering of products and services.

But smaller businesses also play a role in improving the aesthetics of a community. Because of their size, these local shops and restaurants fit comfortably into a community’s older buildings, many of which were constructed before the automobile age led to larger, sprawling, more boxy structures surrounded by lifeless parking lots. These smaller commercial buildings are often like starter homes for new businesses, giving them a right-sized base from which to grow. The older buildings are closely tied to the history of the community, imbuing the new shops, restaurants, and bars with a feeling of authenticity and sense of place.

Older buildings give back to the businesses in a couple of other ways as well. There’s a level of “street cred” that a place gains when they move into an older building and reinvent the property through adaptive reuse. And if the structure is a historic landmark, then there are also local, state, and federal tax credits, grants, and interest free loans that can be taken advantage of in order to maintain or renovate the structure, helping to make the location even more affordable for the small business owner.

As Kimber Lanning said in her talk at the Saving Places conference in Denver earlier this month, “Existing vintage buildings create vital incubator spaces for the entrepreneurial spirit essential to any thriving city.” 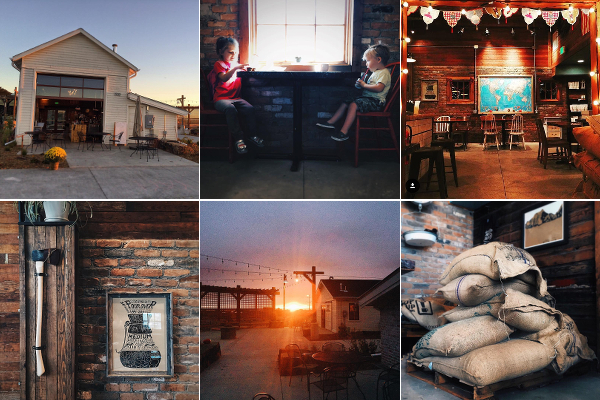 This collage of images was taken from the Facebook page of Bindle Coffee, which is located in Jessup Farm. Notice how these photos leverage the authentic sense of place that being located in an old mechanics garage on the farm lends to the coffee shop.

Old Town is the historic, social, and emotional heart of Fort Collins. It was between Jefferson Street and the Poudre river that a small military camp settled in 1864, giving the city its start. It is in Old Town that the St. Patrick’s Day Parade, FoCo MX, the Old Town Car Show, the Colorado Brewers Festival, the Realities Ride & Rally, New West Fest and many, many other events take place. And with a vibrant pedestrian shopping and dining area embedded into the beautiful and historic triangle of the old city, downtown has captured our hearts as well. (The number of photos of Fort Collins’ downtown on Pinterest gives testament to the deep emotional connection residents and tourists alike experience when in Old Town.)

But it’s time to spread the wealth and build the health of the rest of Fort Collins. There are parks throughout the city where people can gather, hang out, and enjoy themselves. But there aren’t many other commercial areas that double as community centers in the way that Old Town does.

Jessup Farm is a great example of a new development that is trying to take on that role. Located along Timberline Road on the old Jessup Farm property, there are several new, local businesses that are attempting to build a new commercially anchored community commons within the area where the old farmhouse, stables, barn and other outbuildings remain from the days when the land was under agricultural production.

We could use similar commons areas throughout Fort Collins that are anchored with small commercial shops and embedded in historic buildings that add an authentic sense of place. Such mini-downtowns would improve walkability in the city (which would have a positive environmental impact) and would provide places for neighbors to come together, build relationships, and strengthen connections. (Neighborhood schools already do this to some extent, but for those without kids, or with kids that are no longer in school, that avenue for community connectivity isn’t an option.) Such adjunct downtowns could also shorten people’s work commute times, be the basis of a more effective public transit system, enable denser neighborhoods, improve quality of life, provide more equitable living options, and make for a more sustainable Fort Collins.

This kind of change is going to require a paradigm shift. Across most of the city we’re used to having areas where we live, learn, and play and areas where we work and shop, and the two don’t tend to mix. There’s also a penchant for tearing down the old and replacing it with the new. But as we continue to grow, we can either retain this model, which will lead to a loss of that authentic sense of place as well as increased automobile traffic and congestion. Or we can begin to think in terms of these smaller sub-communities within the city that, like Jessup Farm and Campus West, can become focal points for walkable community development that engenders an attachment between residents and the city because it hits those three critical drivers — social offerings, openness, and aesthetics.

Old Town, like the Velveteen Rabbit, has been loved to the point where it has been imbued with social and economic life. Let’s begin to love the rest of the city in the same way, developing adjunct downtowns that incubate new businesses, provide gathering places for residents, adaptively reuse current buildings, and that make our city more walkable, more diverse, more equitable, and more sustainable.

This article is the fourth in a series on creating a vibrant local economy.