Homesteaders in the Colorado territory quickly learned that water is a precious resource in this semi-arid climate and irrigation would be a necessity in order to consistently grow crops on their newly acquired land. The first irrigation ditch built by an early settler was dug in 1860 by G.R. Sanderson on land near Bellvue. In only two decades, so many diversions had been built that it became evident that the Poudre river was over appropriated. Everyone with an irrigation ditch would be able to get their water during a good year, but when drought hit, several land owners would be left high and dry. That’s when the idea first sprouted to divert water across the Continental Divide so that when the need arose, the water would be there.

More than 80% of Colorado’s precipitation falls on the west slope. But 80-90% of the state’s population lives on the east slope. So through the end of the 1800s and into the early 1900s, several small diversions were built. Some pulled water from other river basins on this side of the Continental Divide and dumped them into the Poudre. Others pulled water from the west slope. But in 1902, when Theodore Roosevelt signed the Reclamation Act, the federal government began to get more involved in water development in the west. Through the Reclamation Service, the money was now available to build bigger and better. There was a lot of talk about building a tunnel for large scale water diversion, but it wasn’t until the dust bowl in the 1930s that people felt it was time to embark on the project. 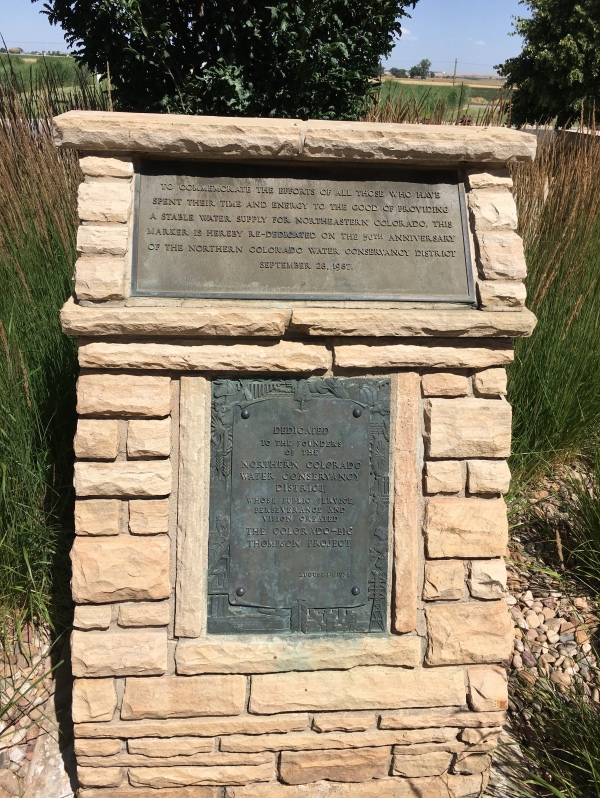 Plaques honoring those who had the foresight, and who put in a great deal of time and energy, to create a water diversion system as well as several storage systems in order to provide a steady supply of water to north eastern Colorado throughout the growing season. These plaques are located at the Northern Water Headquarters in Berthoud.

In 1933, the idea was floated before the public. Though many wanted to utilize the water for agriculture, there were others that were troubled by the damage the project could do to Rocky Mountain National Park. When a party of surveyors tried to enter the Park to find a suitable location for a tunnel, they were denied admittance. They must have gone into stealth mode at that point because one engineer announced that he’d found a route that would work for the diversion. (It also, thankfully, created minimal damage to the beauty of the park.)

In 1937, the tunnel project was approved by President Roosevelt. Drilling began in 1940 and was completed in 1944 (with a short work stoppage due to the war). The tunnel was bored from both sides, and when the two sections met up, they were only off by less than the width of a penny. (And they did that without any form of GPS!) Water from the Colorado river basin began flowing through the Alva B. Adams Tunnel in 1947, powered by gravity.

In addition to the massive diversion project was the creation of a series of storage reservoirs on both sides of the Divide. Lake Granby, Willow Creek Reservoir, and Shadow Mountain Reservoir were man made, while Grand Lake is the largest natural body of water in the State. After passing through these four “buckets” the water travels through the Adams tunnel and passes through the East Portal Reservoir, Mary’s Lake, Lake Estes, Pinewood Reservoir, and Flatiron Reservoir. From there it splits off into the Horsetooth Reservoir, Carter Lake, and the Boulder Reservoir. The project provides enough water to irrigate 650,000 acres of farmland and provide municipal water to over 860,000 people stretching from the Front Range all the way out to the Colorado/Nebraska border. 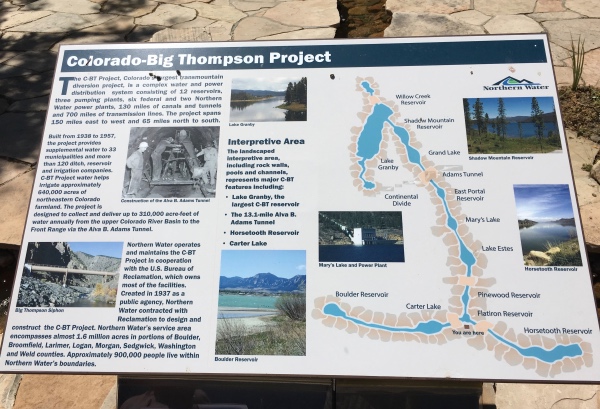 The Colorado – Big Thompson Project was originally paid for through a partnership between the federal government and the Northern Water District which received voter approval in 1938 to add a 1 mil tax levy to every property within the district’s boundaries. (If you check your property tax bill, you should see it on there.) The federal government also built, and receives all the income from, six hydroelectric power plants, which at this point have paid for the initial capital outlay at least four times over.

If you’d like to learn more, I’d encourage you to visit the Northern Colorado Water Conservancy District headquarters in Berthoud, located at 220 Water Avenue. It’s just over a half hour drive from Old Town, Fort Collins. In addition to learning about the history of the Colorado – Big Thompson Project, there is a lot of information on water conservation, display gardens showing various plants that do well in our arid-climate with low water levels, and test gardens.

I visited the Northern Water headquarters last week and my favorite part of the visit was the beautiful water feature behind the building. The entire C-BT water project has been recreated in miniature so that you can walk the length of it and get a sense of the vast project that supports our water supply. 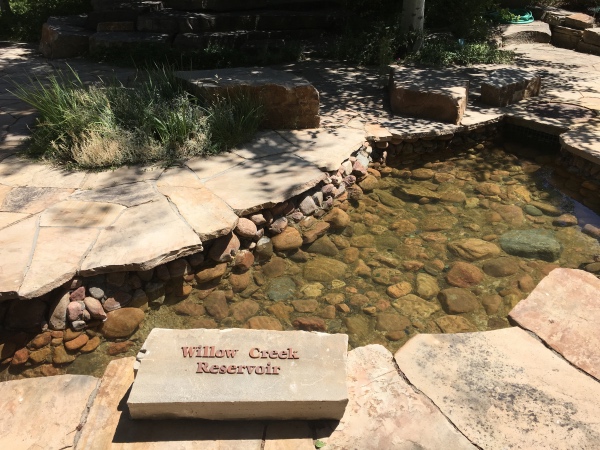 Each reservoir has been mimicked with a basin that includes flowing water that travels from west to east, just as the C-BT water does. 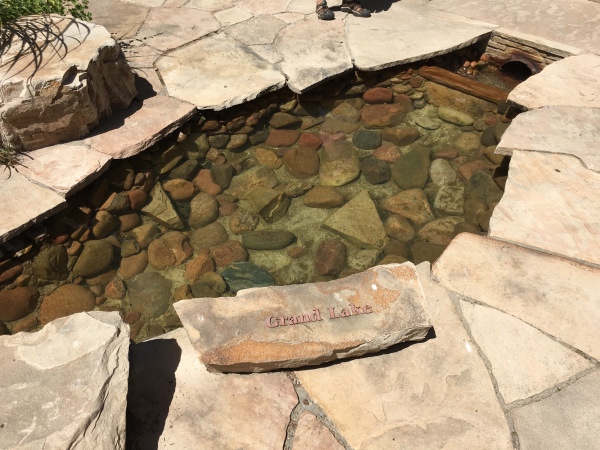 Tunnels, ditches, and dams are each given some sort of symbolic inclusion in the water feature. 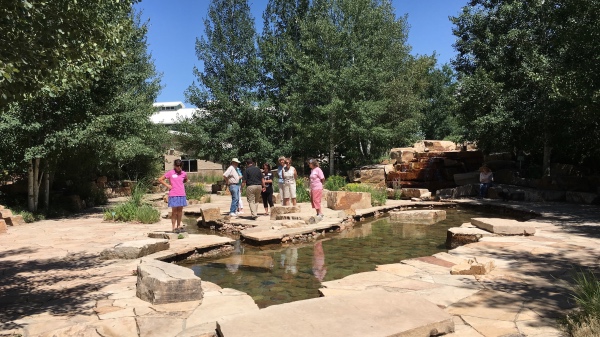 Trees surrounding the water feature make it a beautiful and comfortable place to come and read a book or just sit and listen to the burble of the water. 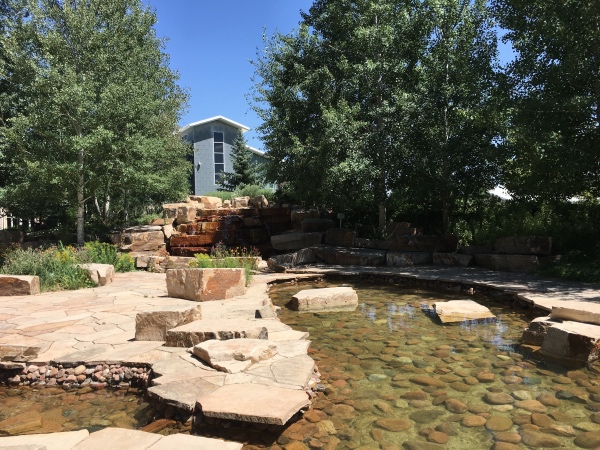 The mini version of Lake Granby is shown at right. The Northern Water building can be seen in the background. 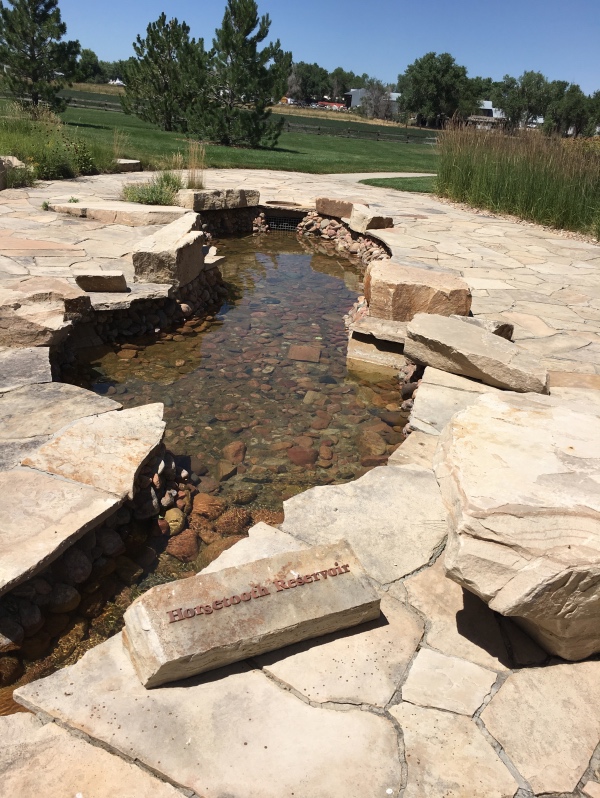 We get about 50% of our water in Fort Collins from the Horsetooth Reservoir, which is a part of the C-BT project.

I visited Northern Water with a local history group and several members said that they like to bring visitors to see the water feature and gardens. This “back yard” area is open and available to the public. We saw several people walking their dogs and reading the interpretive signs while we were there.

The Conservation Gardens are a good place to get ideas about which plants might work well in a xeriscaped lawn. There you can see various native and alternative grasses, learn about irrigation technologies, learn best watering practices, and more. 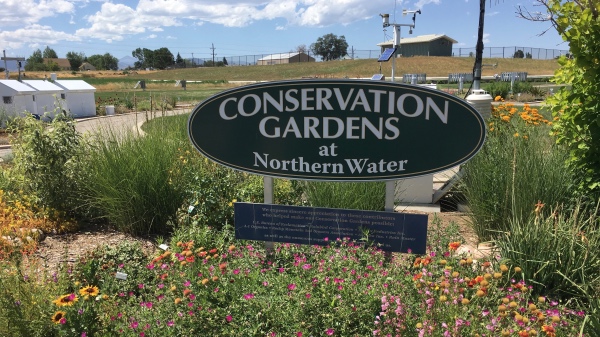 The Conservation Gardens at Northern Water. 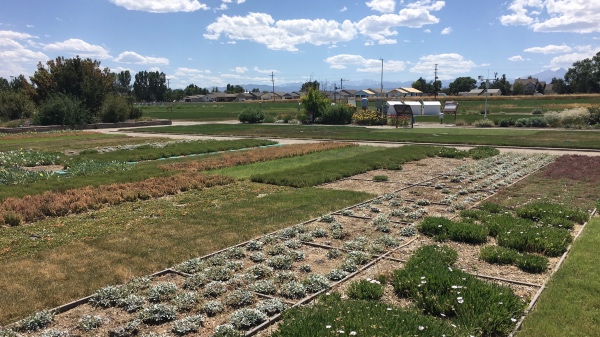 Plants are given varying amounts of water in order to see how much they need to remain healthy without being over watered. 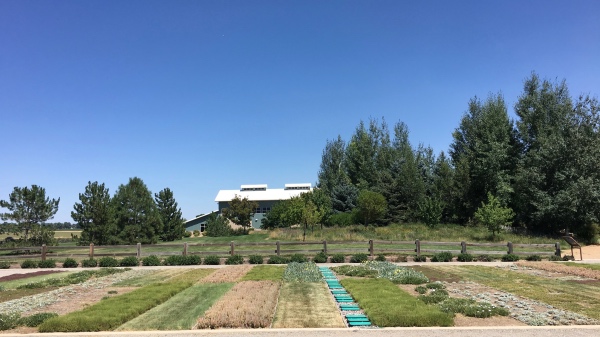 Another test garden with the Northern Water building in the background. 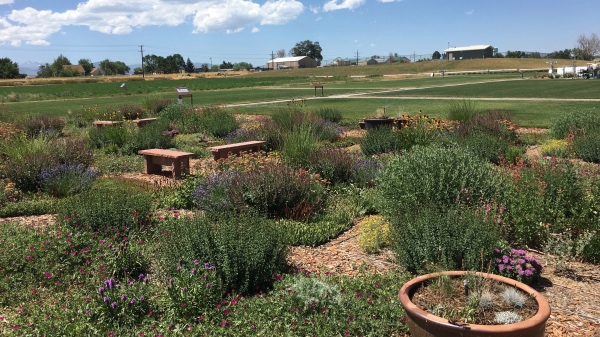 Gardens that have been watered in varying amounts. 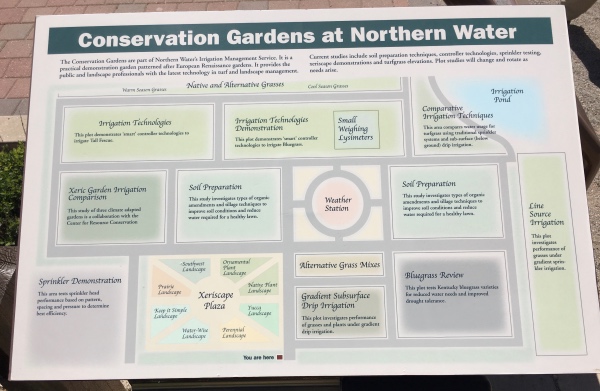 Signage helps to make sense of what you are looking at as you wander the gardens. 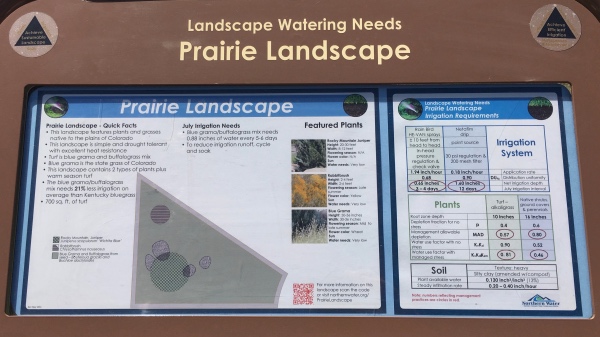 A variety of landscapes are on display. 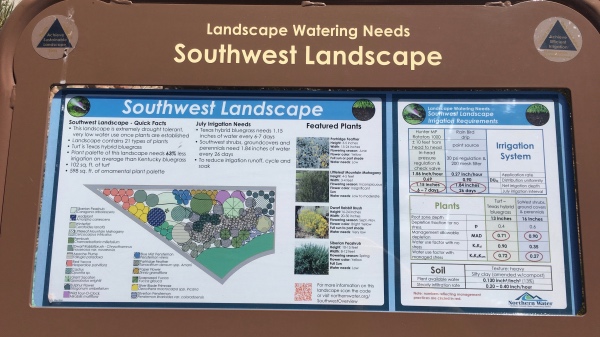 Gardens and water features like this add beauty to our communities, but they also help to educate the public about the work that has gone into providing our cities and farms with a consistent water supply. Conservation efforts are also an important means of using water wisely — getting the most out of a precious, natural resource. 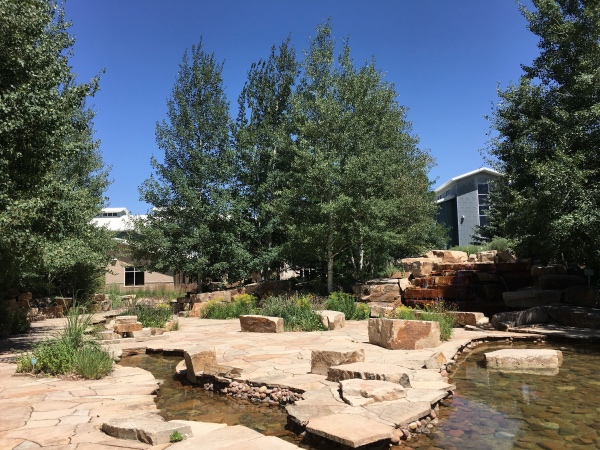 Zach (whose last name I didn’t catch. Sorry about that, Zach!) gave our group a presentation on the history of the project and took us on a tour of the Northern Water building’s “back yard.” You can find a lot of the information he gave on the Northern Water website.

I also got information on the history of the C-BT project through the following two sources:
Werner, Brian. Irrigation Development in Northern Colorado: A Brief History of How Water Influenced the Development of the Fort Collins Region. Colorado Water Institute, Colorado State University.