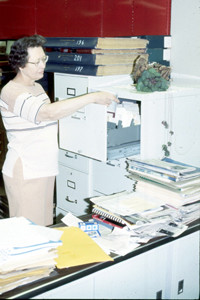 Over and over again, as I research stories for this website, I find myself appreciating those who have gone before me, collecting and preserving the stories, and the photographs that illustrate them, of our local history. One of the historians who I frequently come across while doing research is Charlene Tresner.

Florence Charlene Tresner was born on April 24, 1918 to Charles and Flossie Tresner. Charles’ parents, Ida and Leon Worthington Tresner, lived northeast of Fort Collins, a bit east of where the Budweiser plant is today. Leon was a farmer and rancher. He raised Holstein cows and grew several crops, including a strain of popcorn that he developed along with Sam Kemp to grow in Colorado’s high altitude. Charles attended Fort Collins High School where he met Flossie Jones. When Flossie’s family moved to Greeley, Charles high tailed it down there and proposed so he could get Flossie back to Fort Collins. 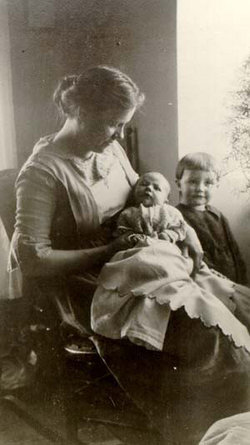 Flossie with baby Hubert and young Charlene. (Photo from KETuttle on Ancestry.com and from the Fort Collins Archive – H04332.)

Charles and Flossie lived on the Tresner family farm and Charles helped his dad raise Holstein cattle. Charlene was born during this time. In 1921, brother Hubert was born, but he only lived a few months. In 1923, Charles became a minister and for the next four years he pastored churches in Colorado Springs, Cheyenne and Longmont. It appears that he traveled to these pastorates while his family remained on the farm. In 1927, the family moved to Fort Collins and Charles started the People’s Tabernacle at 717 Whedbee Street. (The building is currently up for sale.) 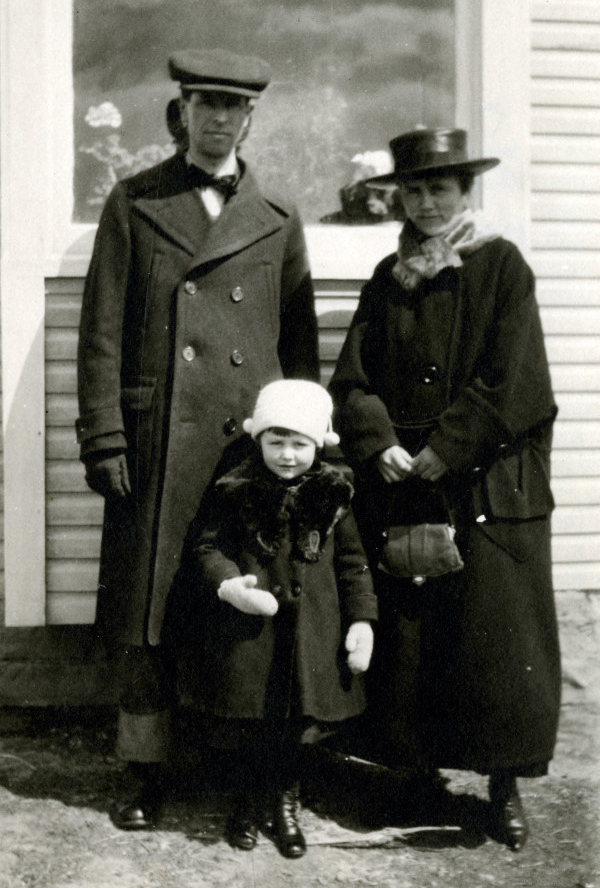 Charlene grew up on the farm until the family moved after her fourth grade year. While on the farm, she attended a four room brick school house that was later torn down to make way for I-25. 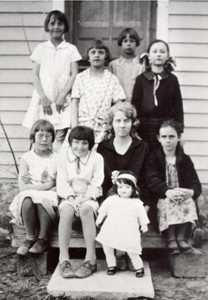 Charlene graduated from Fort Collins High School in 1937 and studied home economics at Colorado A & M (now CSU). While there, she worked as a reporter for The Collegian. In her junior year, Charlene joined Alpha Chi Alpha, a sorority for women in journalism, and she was elected head of the National organization in 1942.  After graduating from Colorado A & M in 1941, Charlene taught home economics for a year before moving to the Durango area where she was a home agent for the Colorado Extension Service in LaPlata County. While there she published a weekly column for the Durango Herald as well as technical articles for magazines. 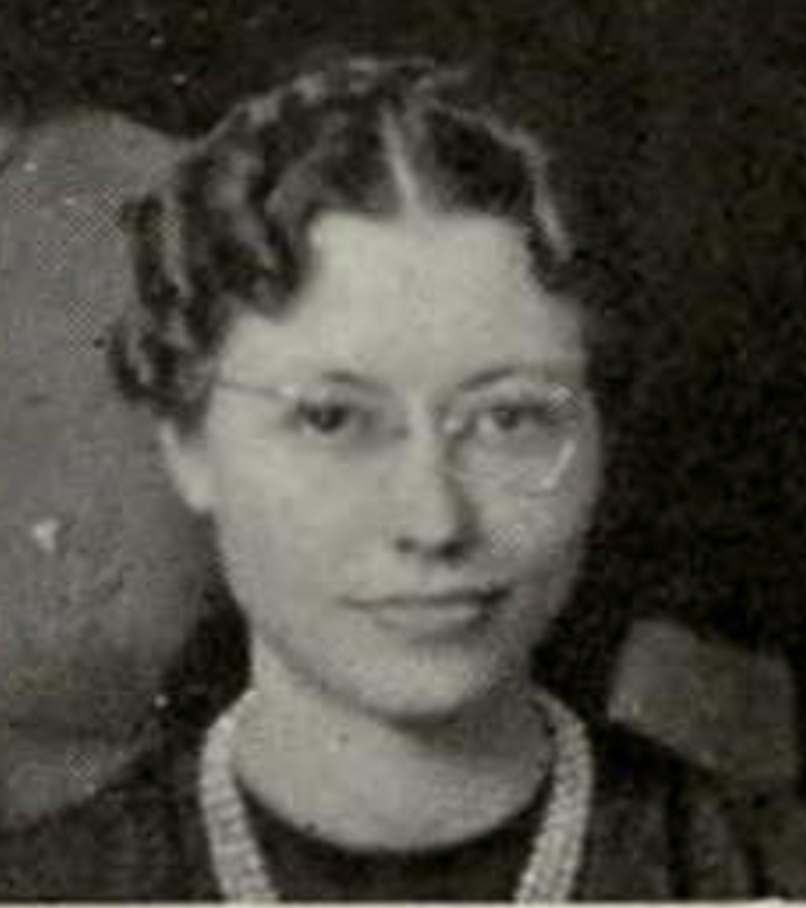 This photo of Charlene Tresner was taken from a group photo of the Alpha Chi Alpha chapter at Colorado A & M in the 1940 Silver Spruce yearbook. (From Ancestry.com.)

The next 23 years of Charlene’s life are a bit of a black hole. In 1944, she married Rev. Forrest Conley, a recent widower. They lived in Kansas (where Forrest was from originally) and Oklahoma. There Charlene was a homemaker, raising three daughters. She returned to Fort Collins in 1971, to take care of her mother after her father’s passing. 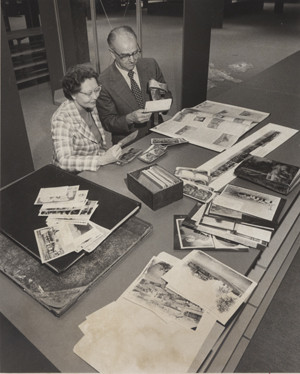 Fort Collins was going through an incredible amount of growth in the 1960s and 70s and the city had changed a great deal since Charlene had moved away after school. As the city changed and the old timers were passing on, it must have become increasingly clear to residents that the city’s history was slowly being lost. So in 1973, Charlene Tresner was hired part time as the city historian. She was able to secure a $15,000 state grant which enabled her to build a local history section at the library. She began to interview the old timers, collecting stories and photographs which she added to the archive. In 1976, when the new library was built, Charlene began to work full time in the Archive. 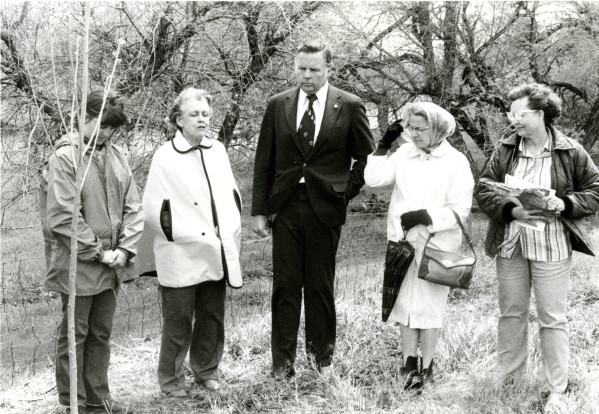 Charlene is at the far right in this photo taken when the Old Council Tree was replaced near the Strauss Cabin. (Photo from the Fort Collins Archive – H01014.)

As I look for source materials for the stories I write, I often come across Charlene Tresner’s name. The interviews she conducted of members of pioneer families are an important resource for historians today and they did a wonderful job of not only capturing specific details, but also of providing a sense of the “feel” of the times, with tales told not as you might read about in a published book, but as you might hear them around the dinner table — full of asides, doublebacks, and tidbits that might not seem proper in a more formal document. 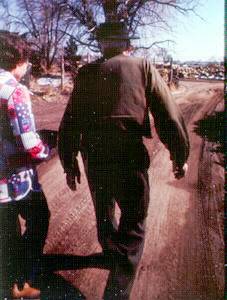 Charlene Tresner walking with Art Collamer on one of the occasions when he was interviewed for the Archive. I used this interview when writing about the Collamer Stage Line. (Photo from the Fort Collins Archive – S01024. According to the entry in the Archive, this photo was taken in 1969.)

Charlene encouraged the local elementary schools to teach Fort Collins’ history to students. She was involved in the Fort Collins Historical Society, including holding the position of president for a time. She wrote several history articles for the Triangle Review, exploring the history behind the names of the city’s streets. These articles were eventually compiled into a book entitled Streets of Fort Collins that was printed in 1977. 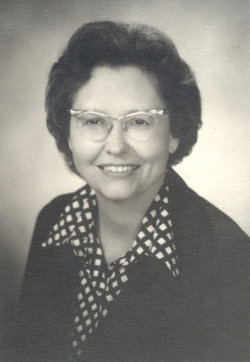 In 1985, Charlene moved to Arizona to live with a historian friend, Agnes Wright Spring. She then moved to Albuquerque, New Mexico, to live near one of her daughters. She passed away on August 13, 1990, at the age of 72. 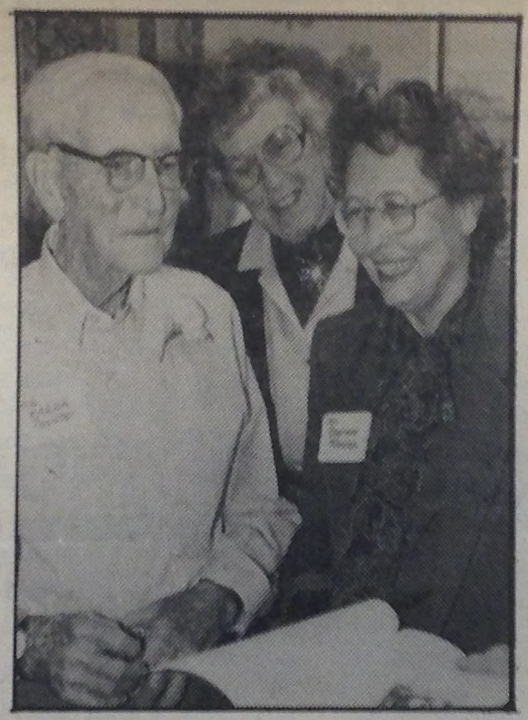 In 1982, a book was published entitled Stepping Out: a Colorado Living History. Frank Poynter, one of the authors, is shown here with Liz Case and Charlene Tresner. (Photo from the Senior Voice, April 1982. On file at the Fort Collins Archive.)

Charlene conducted hundreds of oral interviews (many of which you can peruse at the Old Town library). She collected thousands of photos (which are available online at http://history.fcgov.com as well as at the Fort Collins Archive). And her archival efforts form the basis of almost all historic research that takes place in Fort Collins today.

“Miss Tresner is Elected National Head of Sorority”. Newspaper clipping on file in the Fort Collins Archive. “Summer 1942” is the only identifying information written on the article.