The Story of Charley Clay: Early Pioneer and Former Slave 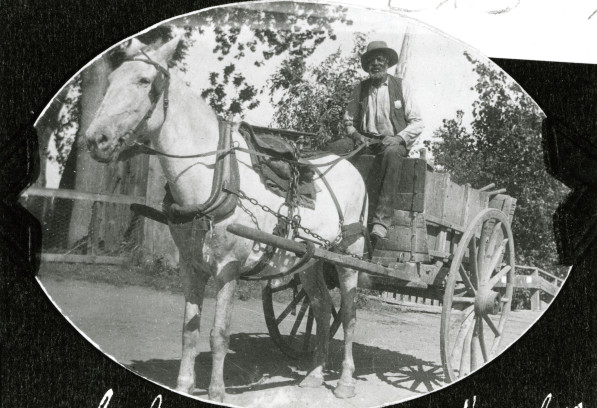 This posed portrait of Charles Clay was taken by Mark Miller, a well known local photographer of the time.

Charley Clay was born, as best as he could figure, on October 10, 1810 in Calloway county, Missouri. He was the property of a Mr. William Robertson, until William died, at which point he passed in ownership down to William’s son, John. Charley describes the first 50 years of his life by saying simply, “I lived the usual life of the slaves and was freed with the rest of them by Mr. Lincoln’s proclamation.” He had been working to pay for his freedom, and had managed to scrape together $600 of required $2,000 needed to free himself. But on August 30, 1861, only four months into the Civil War, a man by the name of Major General John C. Frémont proclaimed that the property of all rebels was to be confiscated and slaves were to be freed. President Lincoln apparently rescinded Frémont’s decree and eventually replaced the man, but it appears that it was following this proclamation (not Lincoln’s, which came later, in 1863) that Charles Clay made his break from slavery. 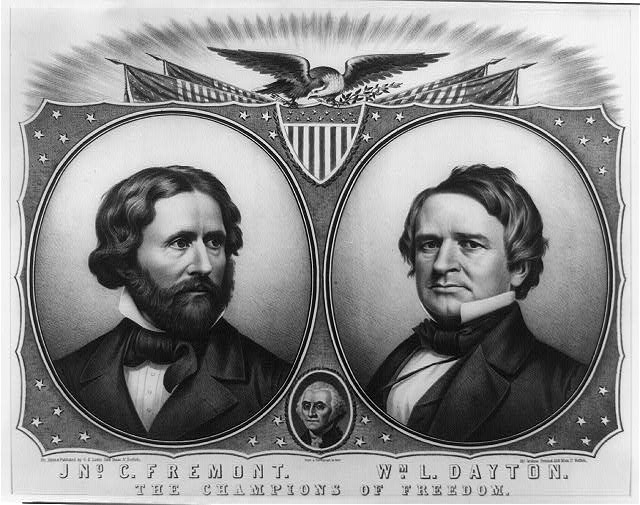 John C. Frémont ran for president in 1856, on a far more public anti-slavery platform than Abraham Lincoln later used. William Dayton was Frémont’s running mate. When Frémont emancipated the slaves of Missouri without first consulting Washington D. C. at the start of the Civil War, President Lincoln was forced to remove him from his position in order to mollify those in the Republican party that were not abolitionists.

Charley headed to St. Louis, where he took a job as cook for a wagon train headed to California. Richard Overall led the party, which set out late in the summer of 1861 (probably not long after Frémont’s proclamation). The party made their way west, but was held up upon arriving in Fort Laramie due to hostilities with the natives in the area. So Charley took a job cooking for the soldiers at the Fort. When they’d go out ranging, he’d join them on their travels.

Charley tells of one harrowing tale in which they came under attack by a larger force of Indians.

“Those were exciting days. I remember once when we were at Fort Laramie, I had to go out with a troop of cavalry under command of Lieutenant Collins. He was a son of Col. Collins, for whom Fort Collins was named. The Indians had attacked a wagon party near Sweetwater and we went to their relief. They were barricaded in a corral made of their wagons, but had already lost several, two of their women having been stolen by the redskins. When we got to the camp, the Indians fled and we went after them. After chasing them into the hills. Lieutenant Collins’ horse became frightened and dashed out of line into the line of the enemy. The last we saw of him he was surrounded by Indians and he disappeared with them.

“We did not find him until next morning, when his body, cut open by the redskins, was lying on the ground. We found a note at his side signed by two white women, who said they had been captured and that they would try and break away the next night. They wanted us to stay on the trail of the Indians, so they could join us if possible. We followed them and sure enough, the next day one of the women was found by us. She had made her escape, but the other one was carried away and we never heard from her or the Indians again, as they had given us the slip. I’m pretty black, but I tell you my skin turned white more than once in those days.”

In 1864, a detachment was sent to the Overland stage station at Fort Latham, where the Cache la Poudre meets the South Platte. Charley accompanied the men, led by William S. McIlvaine, and worked as a cook there for a year before heading down to Denver. Again he took a position as cook, this time at the Old Planters hotel where he worked for Jim McNassar, earning $80 a month. In the fall of 1865, Charley headed to Laporte where he finally settled down for a bit. He took a job at Edward Melangor’s brewery, the first micro-brewery in the Poudre Valley. He also opened the first barber shop in the valley and trimmed the hair of many notable men. As he recounts, “among them [was] Jack Slade, the man-killer, who was afterwards lynched up in Montana. Others I remember were Bill Updyke, the stage driver; Bob Saunders, wagon boss; Bob Spotswood, division agent for the Overland, and William S. Taylor, who ran the hotel at Laporte.”

He eventually went back to his work as a cook at the Laporte stage station, run by Taylor. It was here that he had the honor of cooking a meal for “General Grant.” President Grant visited Laporte in October of 1875. Charley remembered,

“I never will forget that dinner. We had the best Laporte afforded — trout, caught out of the Poudre just above town, chicken, squash, baked beans and potatoes. I had cooked the potatoes in a steamer and I put the steamer on the window sill in the kitchen, while I was busy putting on other dishes. When I went after the potatoes they were gone and I found out the soldiers in General Grant’s escort had taken them. The general had a good laugh when he found it out and he said he made out a good dinner without potatoes. He thought it was about the best meal he’d had on the whole trip.

The first time that Charles Clay shows up in a federal census (as more than just a dash indicating that he was one of several slaves on the Robertson estate, at least) was in 1880. Though Ansel Watrous claims that Charley moved to Fort Collins 1875, the 1880 census lists him as still living in Laporte. It also appears that he had married by that time. Anna Esther would have been 19 at the time that their first son, James, was born. Charley, on the other hand, would have been 63. That’s quite an age difference! The couple had seven children in total: James, Charles Jr. (also known as Clay), William, Lillian, Jesse, Kate, and little Anna who died at the age of 11 months.

On March 23, 1882, the Fort Collins Courier announced that though the Clay house west of town had burnt down, it was insured by Jay H. Boughton & Co. to the tune of $600. By October, the family had moved to the old Toney house “in juxtaposition to the hotel.” I think it was at this point that the family first moved to the city of Fort Collins. Charley opened a restaurant and catering business in this new location. 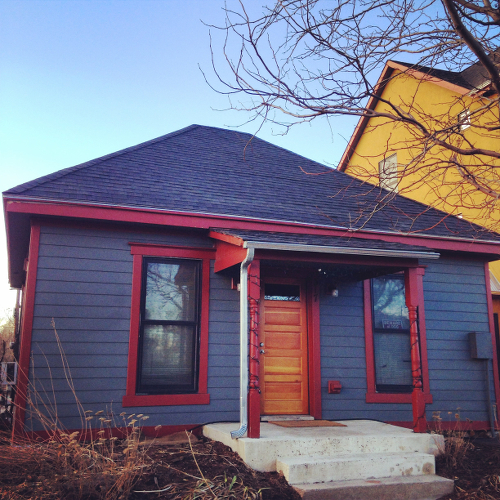 The Hattie McDaniel house on Cherry. The McDaniel family was one of several black families that lived on this block in the early 1900s.

At some point, the Clays moved to a cabin at 317 Maple street. The land is a parking lot for City Hall today.

In the early 1900s, this area was a small black enclave with Gus Green living across Maple at 314. (Gus eventually married Charley’s daughter, Lillian.) Carl Clay and his wife Nellie lived at 321 Maple with Juanita and Ollie Murchison (who were listed as mulattos in the 1910 census.). Herklies Hicks and his wife Josie were at 310 N. Meldrum. And William and Mollie Morris, along with Elsie Catlett were at 313 Cherry. Not included in the 1910 census was the McDaniel family which had moved on to Denver by this point. Hattie McDaniel played the roll of Mammy in the 1939 movie Gone with the Wind, for which she won an Academy Award for best supporting actress. 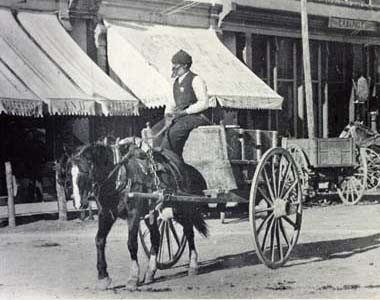 Charley eventually took on a contract with the city to collect ashes and other trash, becoming the city’s first garbage man, a job he held until 1910.  (Census records list him as a scavenger, which was apparently the name used at the time for this role.) He seems to have been a generally well loved man, and I can imagine him going about his rounds and striking up conversations with people as he collected their trash. I’m sure he regaled them with tales of harrowing battles between soldiers and Indians, or he told them about the wonderful meal that he served to General Grant, or he bragged on the fact that he had cut the hair of the infamous Jack Slade.

In August of 1910, just months before he would have reached the grand old age of 100, Charley passed away. He was fondly remembered in the newspaper as Uncle Charley and Colonel Clay. And Ansel Watrous was sure to include him in his History of Larimer County, recounting several of his stories. There was definitely a fondness in the community for the “pioneer colored man of the Cache la Poudre valley.”

The Mark Miller photograph of Charley Clay is from the Fort Collins Archive online as was the last photo of him out with his cart.

Find out more about Hattie McDaniel and the house she lived in in this city pamphlet on several landmarked properties in the city.

Census information on the Clay family and addresses of where they lived was all found thanks to Ancestry.com.