Shana tova u-metuka! (which means “a good and sweet year” in Hebrew.)

Wednesday (the 24th) at sundown begins the Jewish new year. It seems like an appropriate time to look back at the history of Jewish pioneers in Fort Collins.

I’ve written before about the brothers, William and Louis Bernheim, who were the earliest Jewish settlers in our city. Theirs was a sad tale. So today I bring to you the story of Charlie and Minnie Reingold, which is much more light hearted.

In researching the story of the Reingolds, I’ve found that a small Jewish community had begun to form in Fort Collins in the early 1900s. I’m not sure who was first to move here after William Bernheim passed away, but Sam Meyer opened a store on Linden street in 1905, which means he probably moved here at about that time. So far in my research, Sam is the first Jewish person I’ve been able to find who moved here in the 1900s. Charles and Minnie Reingold didn’t arrive until sometime in the 1910s. But among the Jewish population in Fort Collins at the time (an estimated seventy-five people by 1927) it was the Reingolds who seemed to stand out to the greater Fort Collins community as the representative Jewish family. This is evident in their mention in history books and newspapers while a comparative silence has fallen upon other Jewish pioneers. 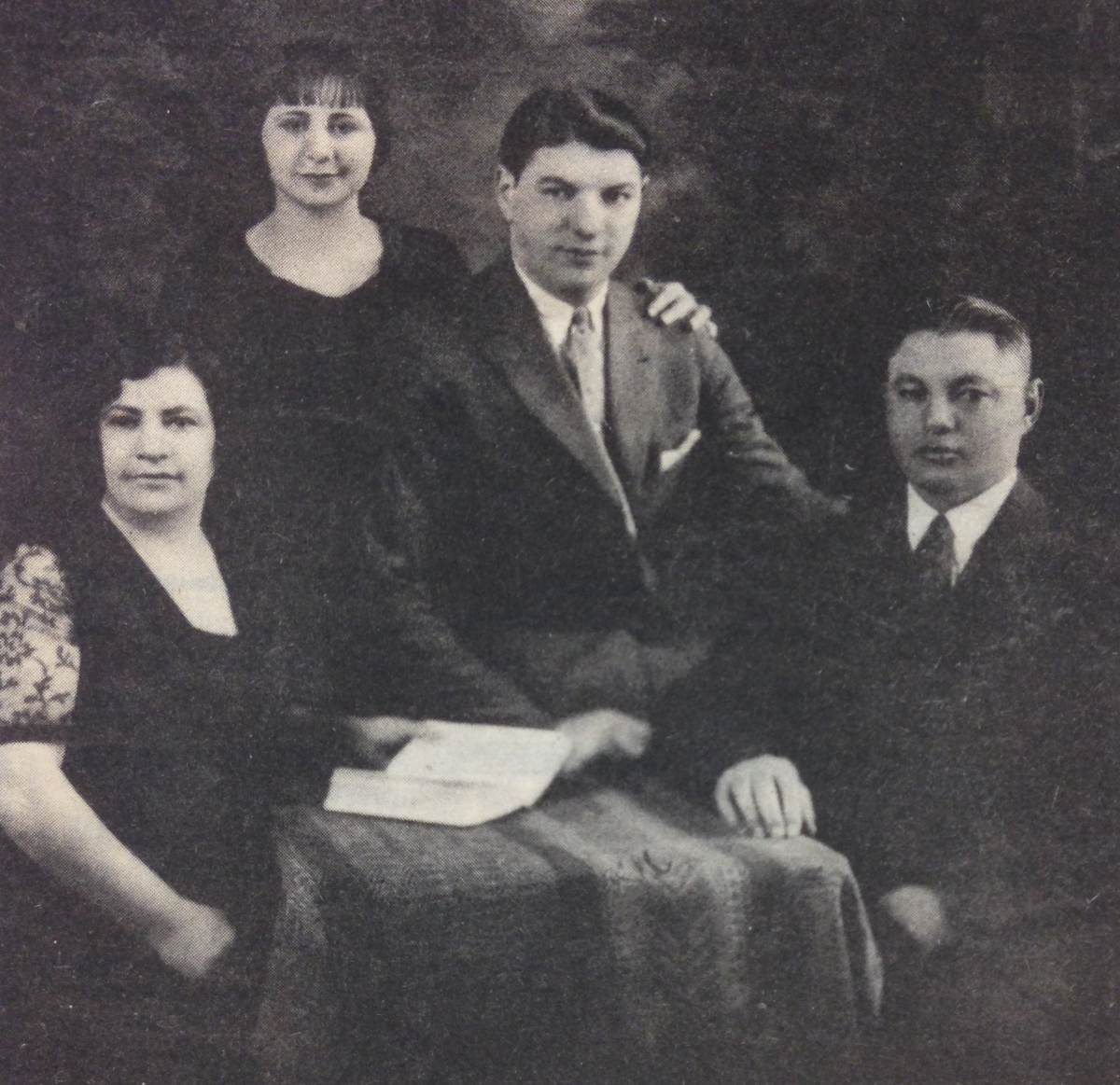 Minnie, Sarah, William, and Charles Reingold. This photo was in the August 12, 1981 Triangle Review along with an article about the family and the Torah they kept safely stored in their dining room.

Born in Russia, Charles Reingold served for three years in the Tzar’s army where he had a beloved horse named Roz-rod. He married Minnie Gerber and six weeks later he left for America, intent upon creating a better life for his wife. At the time, he didn’t realize that Minnie was pregnant, so three years later, when he finally had raised enough money to bring her over to America, their son William came to Chicago as well. 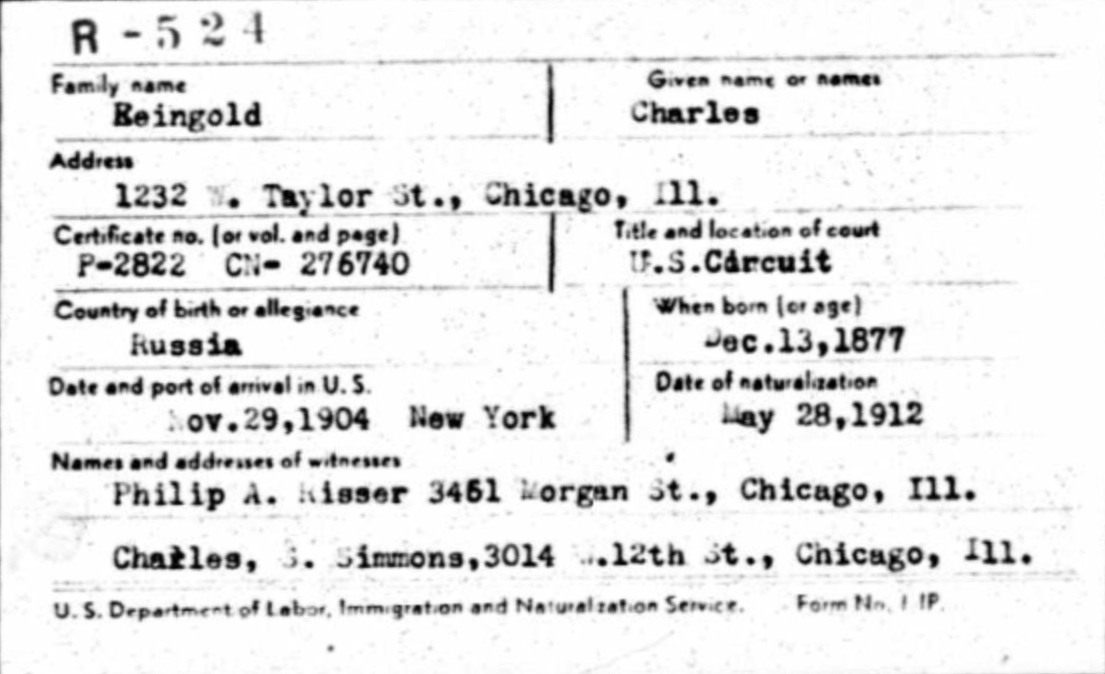 Charles Reingold’s naturalization petition states that he arrived in New York city in the fall of 1904 and became a citizen in 1912.

The 1910 census lists Charlie, Minnie, William and their baby girl, Sarah, as living in Chicago, Illinois. Charlie worked as a janitor in a theater. What the census doesn’t say is that in April of 1908, Minnie gave birth to a little girl, Rose, who died the next day. And in July of 1910, apparently after the census was taken, Minnie gave birth to little Sam, who passed away the following year. Rose and Sam are buried in Forest Park, Illinois.

This is one of the Charles Reingold’s earliest newspaper ads, from when he lived and worked at 248 Linden Street.

It’s likely that Charlie went to work with a grocer at some point.  According to his daughter-in-law, also named Sara, when Charlie’s employer moved to Colorado for his health, the Reingolds followed him out. Soon, Charlie had a business of his own selling produce and used goods at 248 Linden Street, where the northern part of the Sunset Event Center is today. By the early 1920s, Charlie bought a small house on Walnut street where he moved his family and continued his business. The house is still standing, albeit quite modified, at 326 Walnut street. Leroy’s Locksafe Systems is located their currently, and they include the history of the building on their website. The house was also highlighted in my earlier post on Jack-in-the-box houses. (Click through to see a photo of the building today.)

Charlie lived a pretty simple life with a simple occupation, but from reading descriptions of the man, it seems like his God was his first love. He was known as “the devout Jew who sat in the Colorado sunlight every Sabbath, reading from his prayer book.” Though other Jewish families in Fort Collins at the time were involved in much more lucrative businesses, Charlie seemed content to buy and sell used goods. Though he was involved with the Masons, references to him in the newspaper tend to refer more often to his business than to his involvement in local social events or clubs. While the paper often mentions that this or that merchant is traveling here or there to pick up supplies, Charlie’s trips are never once included. The sense I get was that he was a man of integrity, with a jovial spirit about him that caused people to think upon him favorably, not only locally, but even in surrounding communities, as far away as Wyoming. He was known as a fair and honest man. His philosophy in life was that “The only thing you leave behind is your good name. They don’t make pockets in shrouds.” 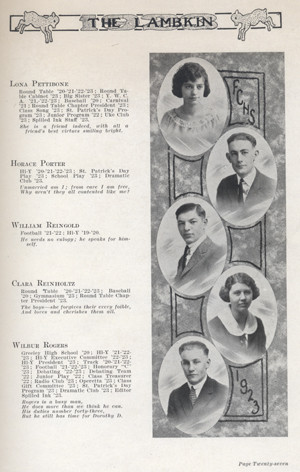 Willie Reingold, shown here in the FCHS yearbook, was active in sports in high school and was mentioned in the Fort Collins Weekly Courier in 1918 as having knitted a very nice pair of socks for a school fundraiser (the only boy in the school to complete a knitting project). Sarah enjoyed participating in school plays. She eventually moved to Nebraska and took work as a stenographer.

There is one story, told by his daughter-in-law, that speaks to Charlie’s good-natured spirit as well as to the level with which he was respected and emulated in the community. In 1918, when he was still fairly new to town, he showed up at a food auction and bid on a dish, not realizing it contained pork and beans (which, of course, isn’t kosher). Seeing that each dish was only bringing in, on average, 50 cents, Charlie decided to up the ante, so he started bidding on the item, finally winning it for $5. It wasn’t until after he won that he discovered what was inside the closed pot. Realizing his mistake, he decided to hand the dish right back to the auctioneer for resale. Before long, others followed his lead and every dish that was won was getting handed back for resale at least once. By the end of the event, $150 had been raised for charity.

There was no synagogue in Fort Collins until the local Jewish community built a facility in 1982 on West Drake, which they named Har Shalom. But in the early 1900s, the services were held in houses and Charlie was a cantor, chanting the prayers to God. He also kept the community’s Torah in a special cabinet in his dining room. In the 1950s, when he and Minnie moved to Nebraska, to be near their daughter, Sarah, Charlie took the Torah to Congregation Beth Israel in Greeley for safe keeping.

When ground was broken for Har Shalom, the congregation president, Michael Aronson received a phone call from Beth Israel telling him of the scroll and offering to send it back up to Fort Collins where it belonged. Though Minnie passed away in 1958 and Charles in 1963, their memory lives on at Har Shalom every time the Pioneer Torah is brought forth from its cabinet and sung aloud to the people.

The August 12, 1981 article in the Triangle Review by Barbara Sherrod and entitled, “Junk dealer always left his good name,” was incredibly helpful in putting this post together. It seems that it was written, in large part, based on an interview with Sara Reingold, Minnie and Charles’s daughter-in-law, and based on census data and other documents, I believe a few of her details weren’t quite right on. But her stories and background detail were invaluable and certainly helped to round out the character of Charlie Reingold. I was able to access the Triangle Review article through the Fort Collins Museum of Discovery Archive.

It was through Ancestry.com that I had access to all of the census records, city directories, death notices, and the naturalization papers that I used to track the lives of the Reingolds from Russia to where they were buried in Nebraska.

Rabbi Shoshana Leis confirmed that the Torah that Reingold had been caretaker of is still being used at Congregation Har Shalom and is now referred to as the Pioneer Torah.