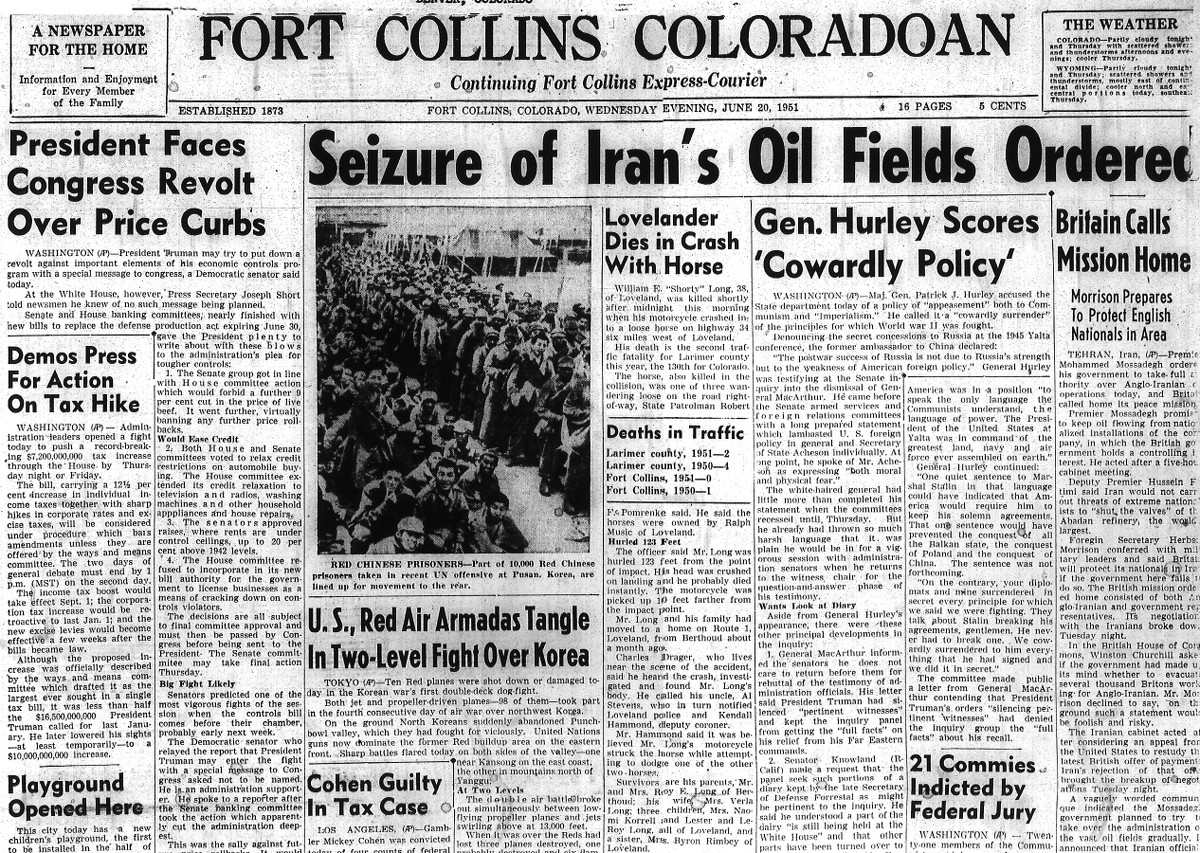 The Coloradoan headlines on June 20, 1951 — Britain’s “rich Iranian oil interests” were being threatened because Iranian militants had declared that they would be taking over control of the vast Anglo-Iranian oil fields.

William “Shorty” Long, of Loveland, was killed in an accident just after midnight as his motorcycle slammed into a loose horse on highway 34. The horse was also killed in the collision. Two other loose horses escaped harm. 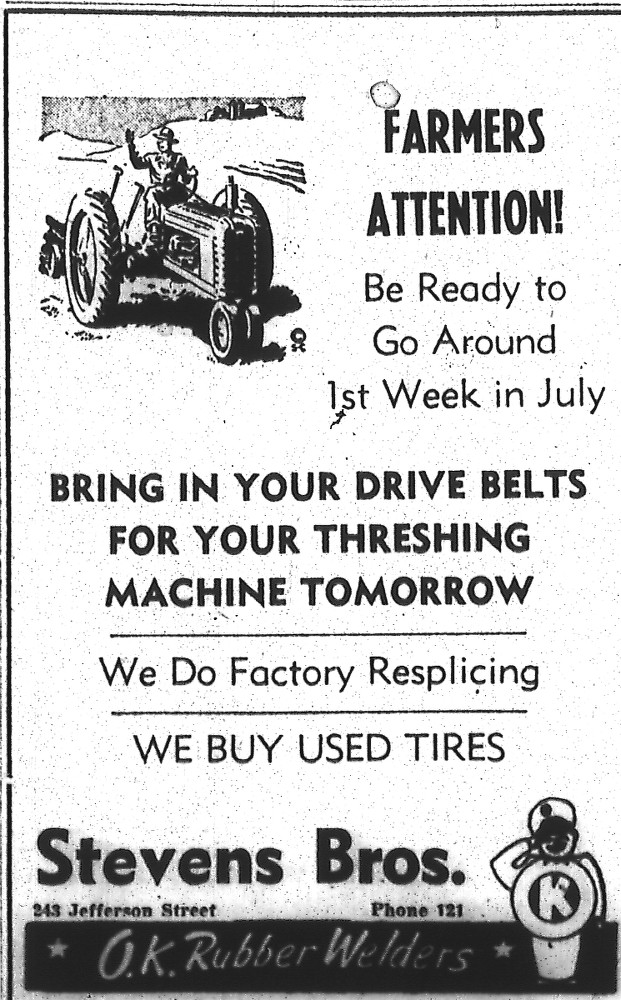 Most of the area to the south of Prospect and west of Shields was still farm land in 1951.

Twenty-one Communist Party members were indicted in New York on charges of plotting a violent overthrow of the U.S. government.

A 12.5% increase in individual income taxes as well as a hike in corporate rates was being pushed by federal administration leaders. Wow! That’s quite a hike! 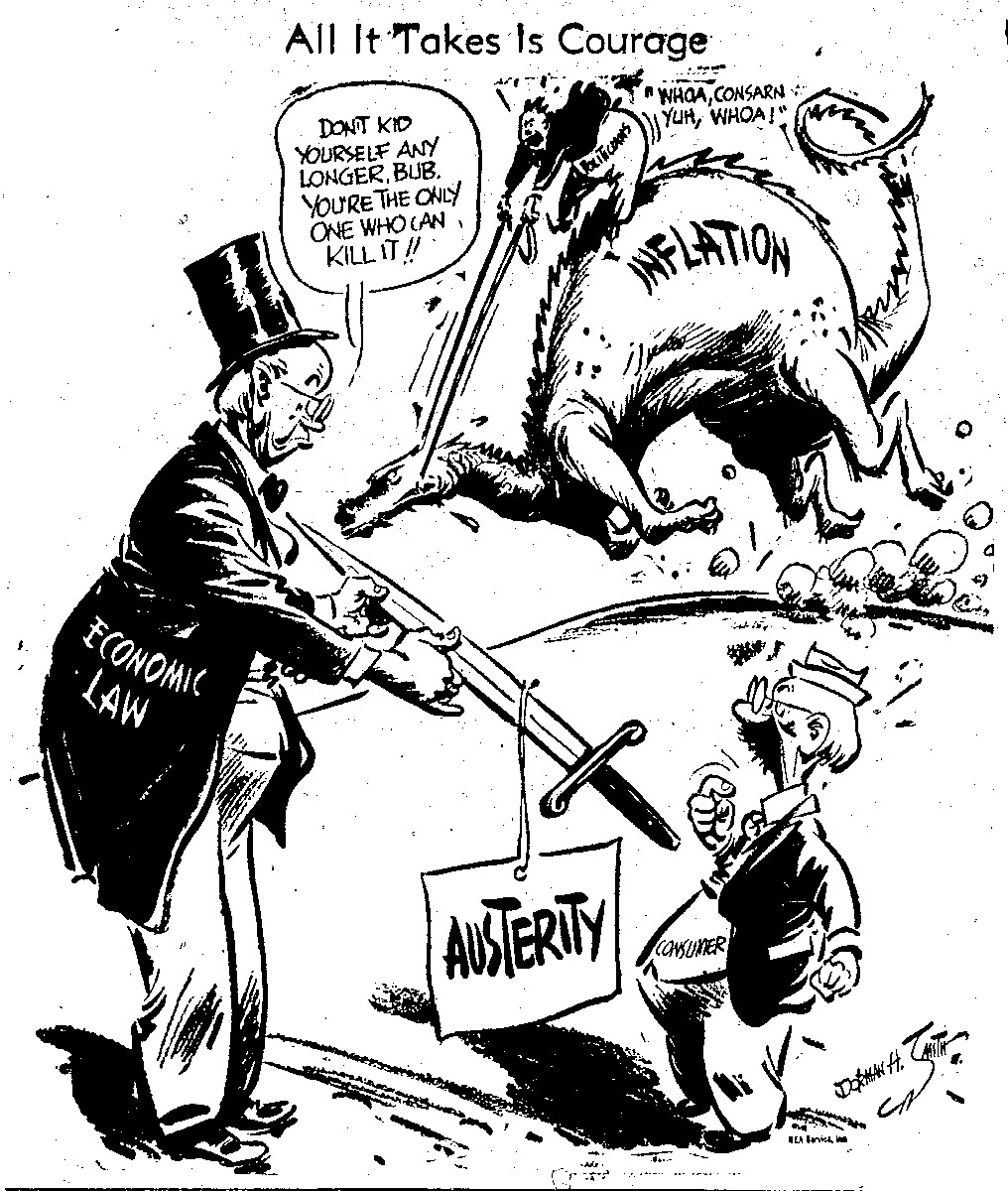 The Korean war was financed primarily through taxation (rather than through the government taking on more debt) which created inflationary pressures.

Gambler Mickey Cohen had been convicted of four counts of federal tax evasion. His pretty wife was cleared of charges when it was determined that she signed the documents without any real knowledge of what the documents said. [Yes, the article does declare that she was good looking. I didn’t just throw that in there.]

After a strafing attack only 30-feet high over North Korean territory, an American pilot returned to base to find a stone lodged in the wing of his plane. The newspaper joked that perhaps rocks were the North Korean’s secret weapon. 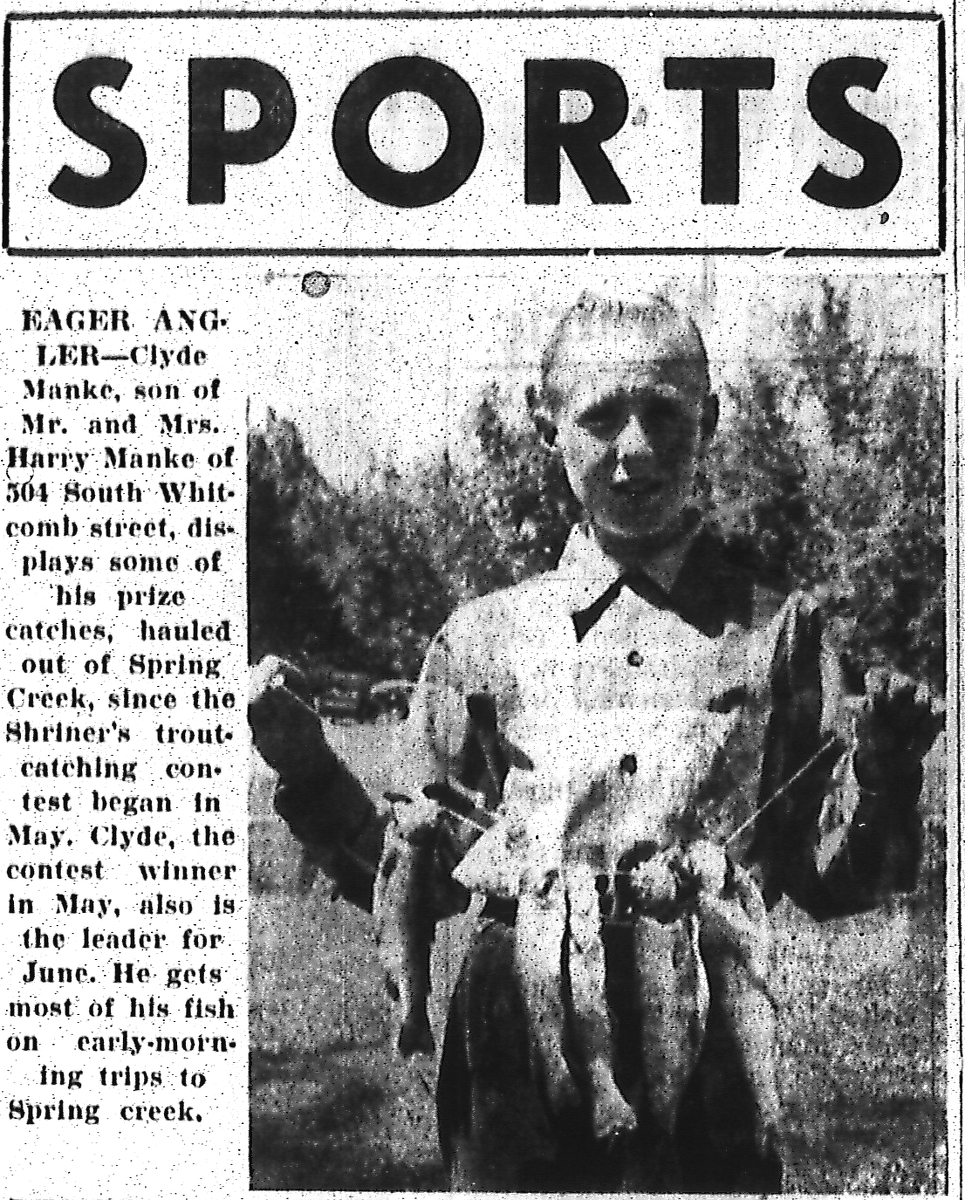 Clyde Manke with his catch of fish.

The first summer concert of the year was to be given at 7:30pm on the steps of the high school (FCHS). The 80-piece band would play marches, popular music, and light overtures. 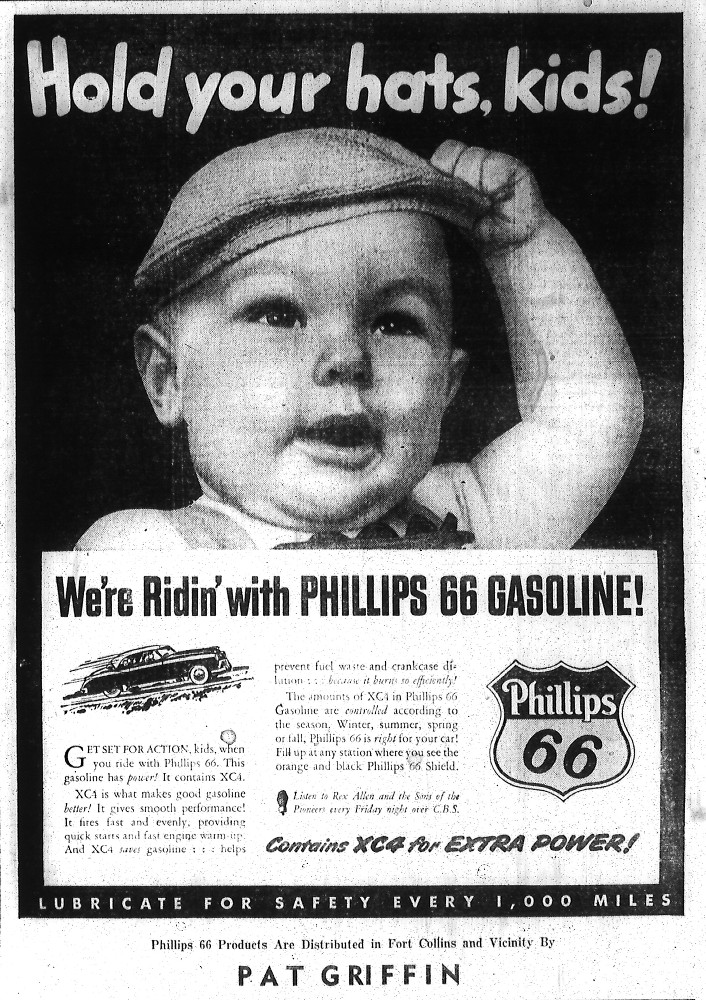 This adorable ad is for gasoline… with extra power!

A new playground was put in at Library park, between the city library and the Pioneer museum. It included 6 pieces of equipment and was the first city park on the east side of town. 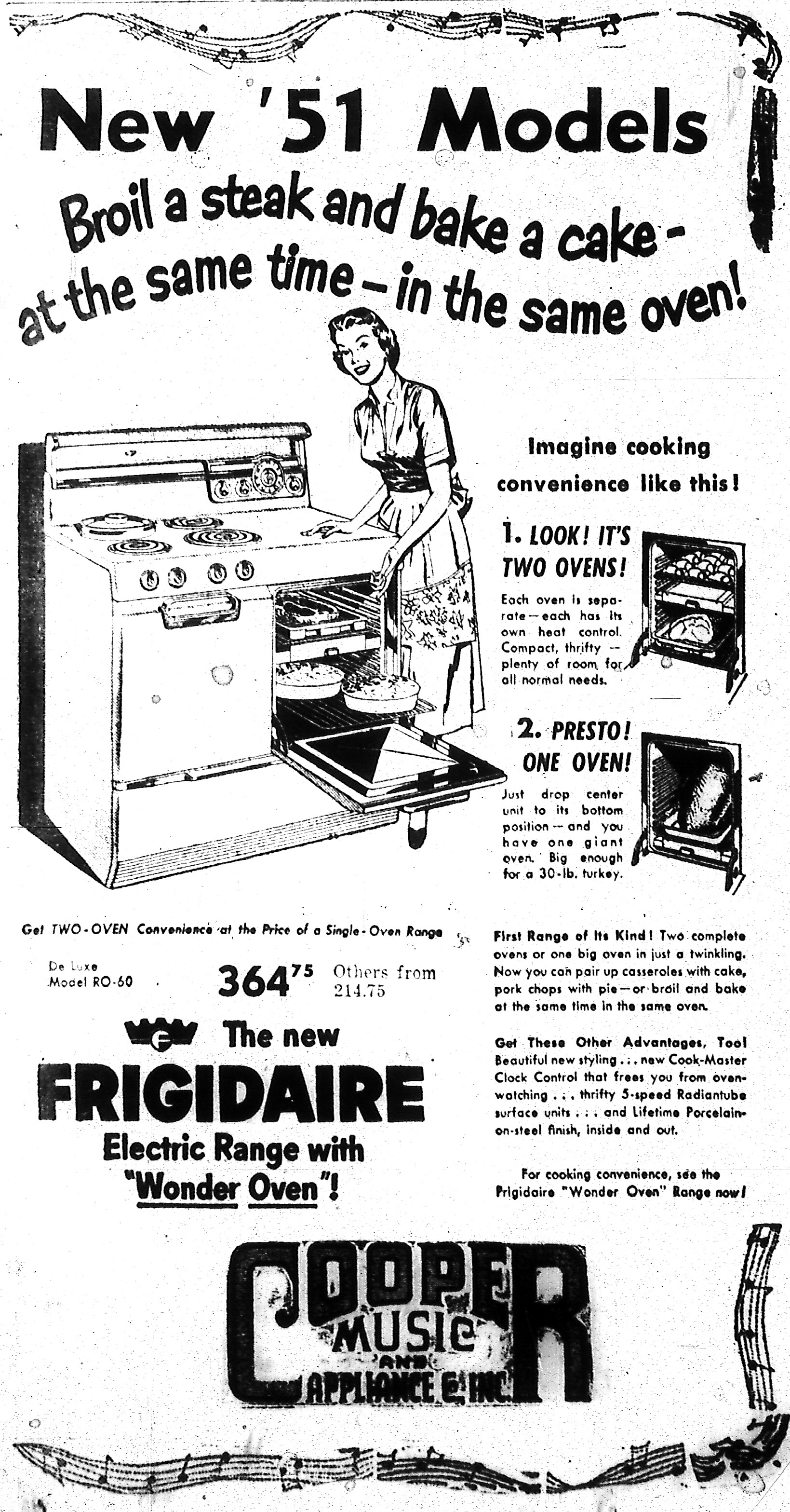 Broil and bake at the same time! You can purchase the wonder oven at Cooper Music and Appliance Store… and interesting combination.

The Larimer county bookmobile would be making twice-weekly trips to Wellington, Campion, Poudre Park, Bellvue, Timnath and Veterans’ village through the summer.

One letter to the editor complained that the city council and “so-called city manager” were disregarding the will of the people when they went so far as to try to shut down the streetcars because repairs were too expensive. The writer asks if the light plant should also be shut down, therefore, because it was expensive to maintain. 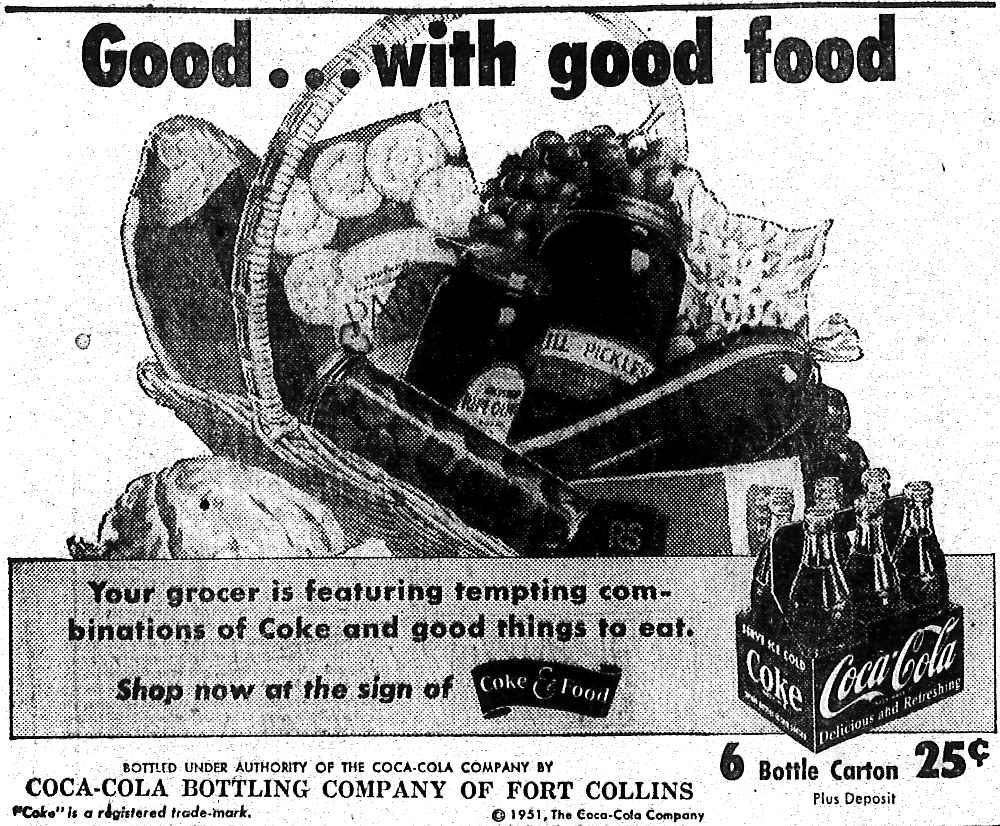 Mrs. Florence Morseman passed away at the age of 75. Florence had been an early pioneer that moved to the Fort Collins area in 1885. Mr. and Mrs. Morseman had run a farm 3 ½ miles south of town on South Shields, but they moved to 1202 W. Oak Street in the late ‘30s.

Poudre Canyon Day was just three days away and many, many ads mentioned it. 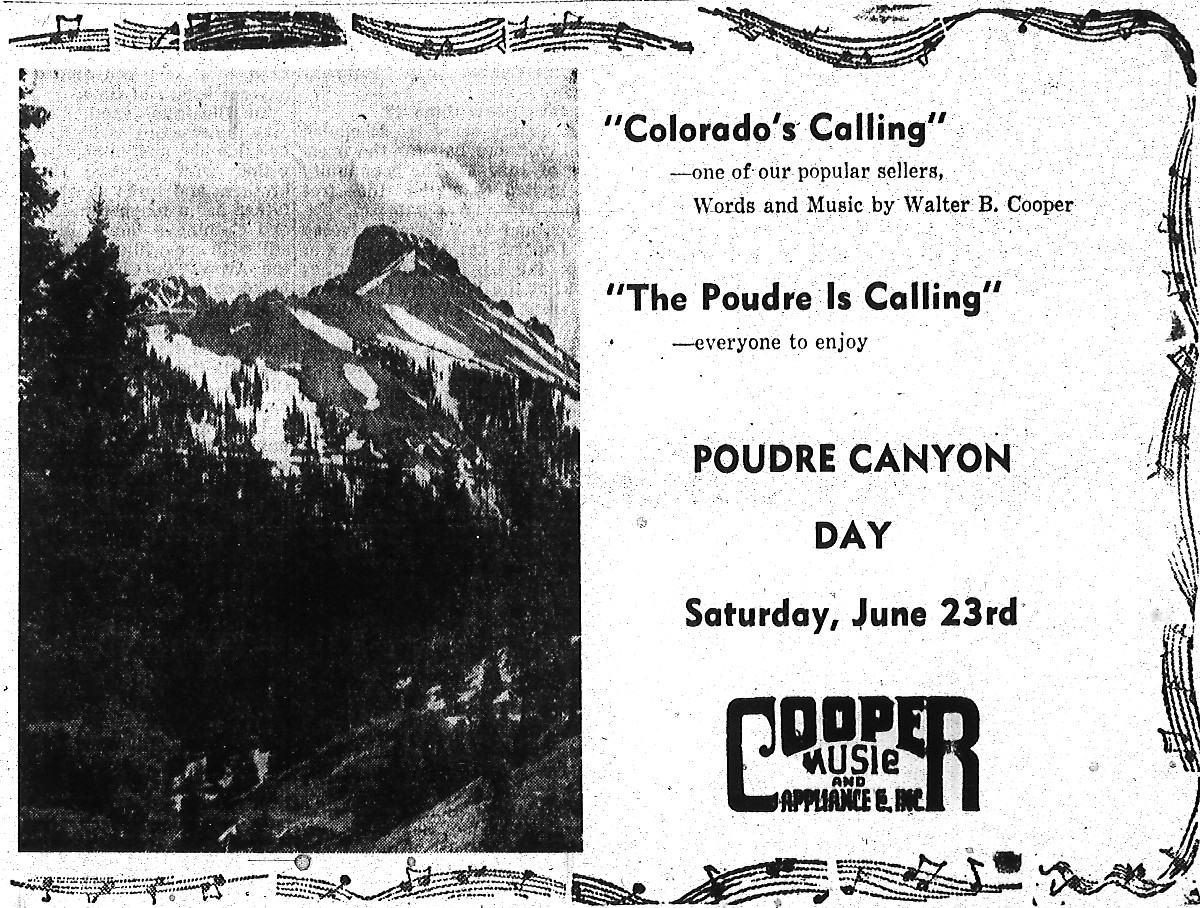 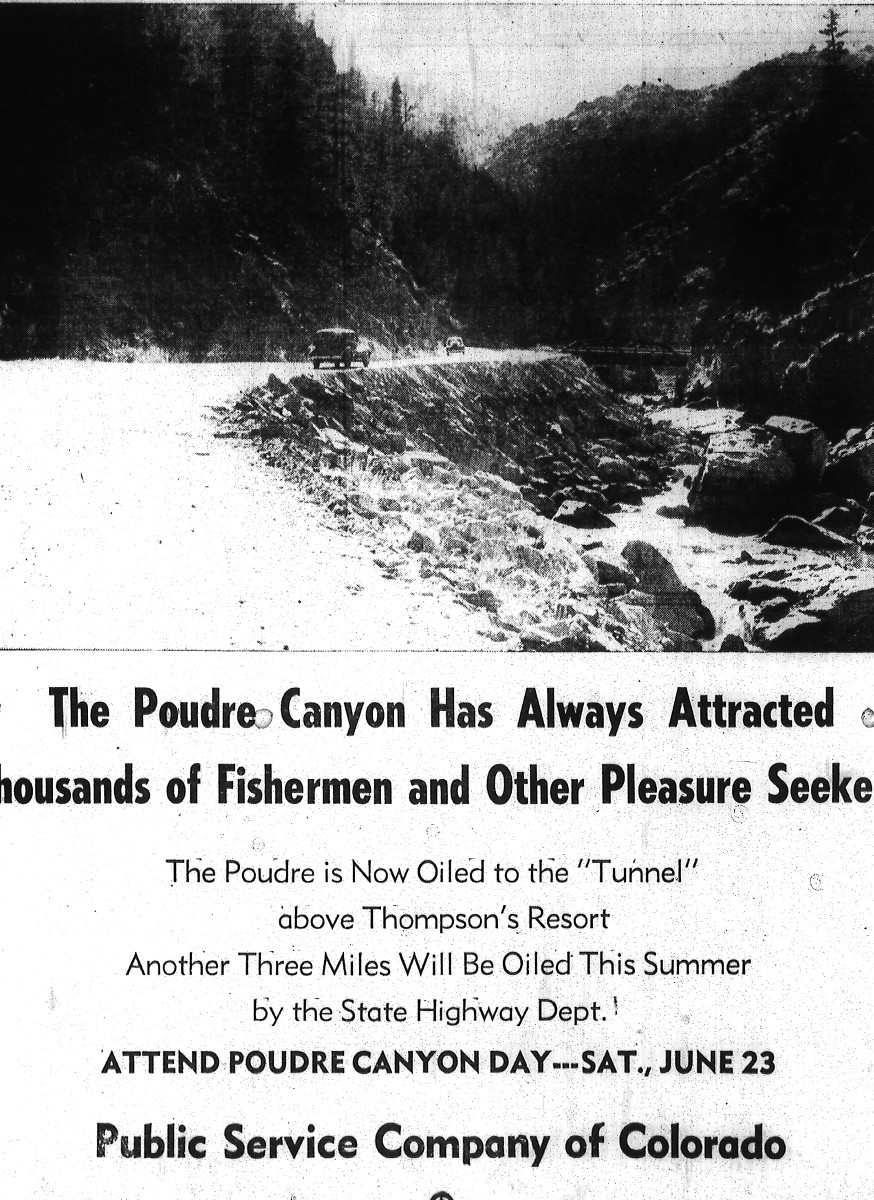 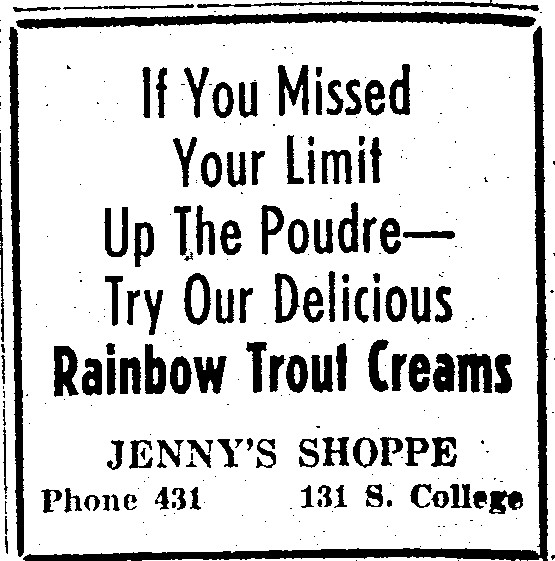 The Fort Collins Coloradoan, 20 June 1951. I accessed this newspaper on microfilm thanks to the Archive at the FCMoD.

To get a better sense of the Impact of the Korean War on the economy of the United States, check out Wikipedia (which has informational pages on stuff I never would have thought there would be pages about).