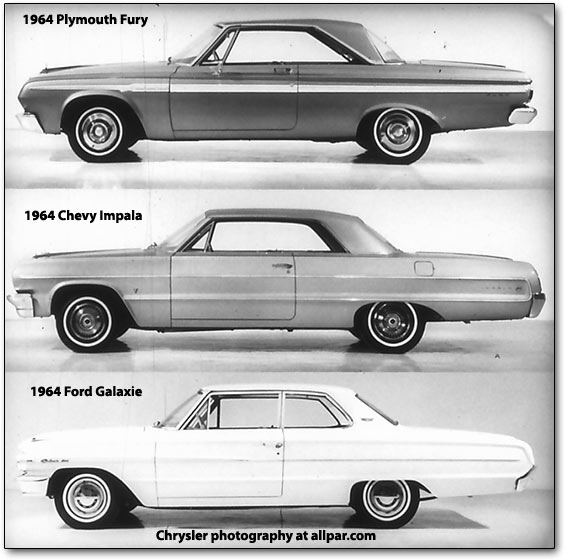 Post-war Americans loved their cars. They ate in them. They watched movies in them. They got checks cashed while in them. They even did some things that can’t be mentioned on a family-friendly blog in them. Cars became symbols of freedom, of power, and of identity. Gas was cheap. Roads had been freshly laid. It was the dawning of a new era in American culture. 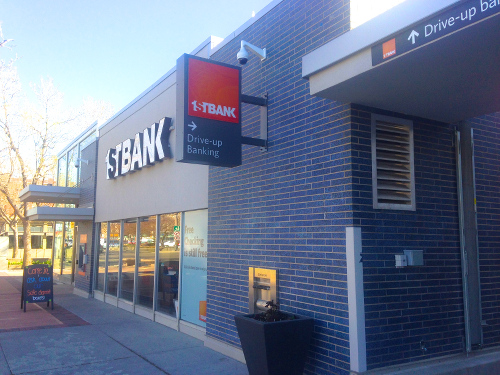 The original Columbia Savings and Loan now houses 1st Bank, which still boasts drive-up banking for motorists that don’t want to have to stop and go in.

And Fort Collins was no exception. As the use of automobiles grew, trolley patronage declined until the system was finally shut down in 1951. Old buildings were scraped to make way for parking lots. The First National Bank building at the corner of Mountain and College was torn down in order to be replaced with a hip new modern structure that had space for a drive-thru around the back. 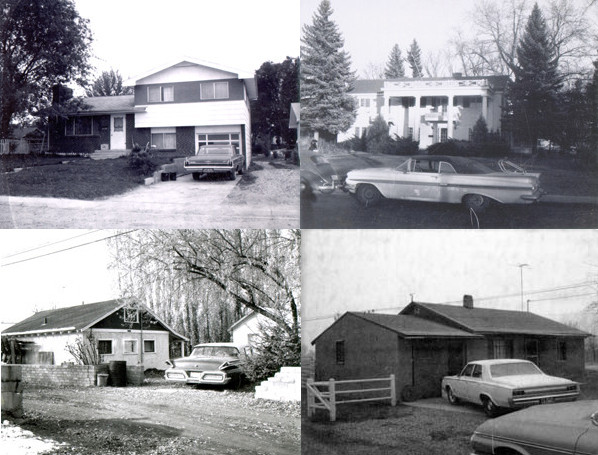 Old cars around town — photos from the 50s and 60s in Fort Collins.

And then there was the kids with their cars. On any given Friday or Saturday night, you’d see them “scrapin’ the gut,” “cruisin’ the strip,” “cruisin’ College,” or “cruisin’ the A’s.” There were many names for it, but essentially they all meant the same thing. The kids would hop into their cars and drive up and down College Avenue, most often from the A&W on the north end of town to the A&W on the south end of town. 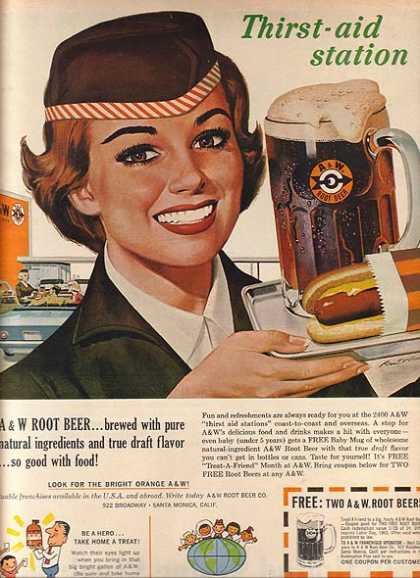 It was just under three miles to get from the one A&W to the other. You could get an ice cream cone for 10¢ or a root beer float for 25¢. The driving was cheap since the gas only cost 16¢ a gallon. (Kids driving in later years experienced higher prices, but still under a half dollar. The highest price I’ve heard so far is about 39¢ a gallon.)

It was a social event. You weren’t on the street to get from one place to another. You were hanging with friends. The kids would park their vehicles in the center parking on College Avenue downtown. They’d either hang out in their cars, or get out and sit on top. The goal was to see and be seen. And if you had your own car, you were there to show it off. The boys spent hours upon hours fixing their cars up. They’d drop them so low that the adults would make jokes about the bottoms scraping on the ground. (Hence the term “sraping the gut.”) These cars were some of the original low-riders.

Sometimes the kids would leave College Avenue and head over to Rob’s Drive-In at Mulberry Street and S. Bryan Avenue. (Rob’s was owned by Robert Martell who had worked at the S. College A&W for awhile. The drive-in was about where Lupita’s is today.) Or they’d go parking on top of the City Park hill. Or they’d head over to the Horsetooth dam where they’d have “submarine races” (which was code for a bit of hanky-panky).

The A&W on the south end of town had burger people stationed on top of the building. One year, someone stole Papa. (Did they ever find out whodunit?) 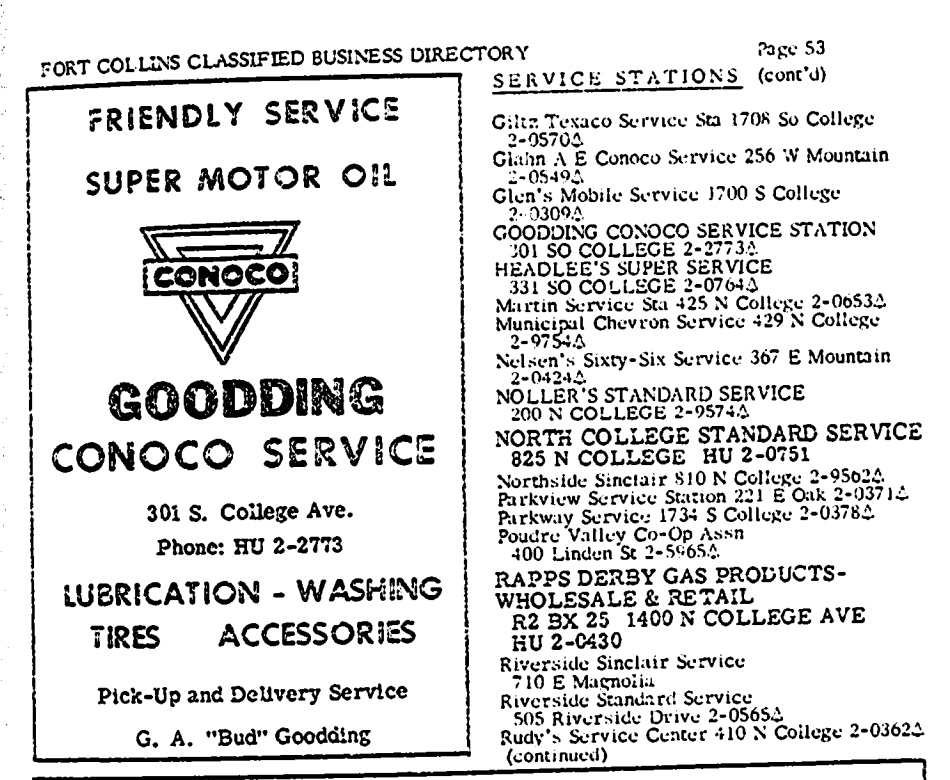 A Goodding’s ad from the 1959 City Directory.

In hearing people talk about their experiences as teens, what struck me was their terminology. On Facebook, people would say that they’d stop in Center Parking. They’d capitalize the phrase like it was a proper name for a legitimate business. But when I asked where the business was, they said it just meant the parking strip that’s in the center of College Avenue. Or they’d talk about stopping at Goodding’s or heading over to Rob’s. Sure, they were going to specific businesses, but these businesses were always associated with the people who owned them or who worked there. Life was very personal back then. Most of the “chain” stores of the time were actually franchises, owned by locals who you knew from church, or because you went to school with their kids, or because they were your neighbors from down the street. 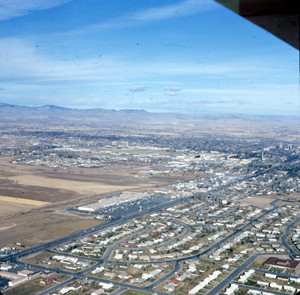 Aerial view of Fort Collins in 1969 including South College Heights and University Plaza. The McDonalds is the building at the southern end of the shopping center. This was southernmost extent of the city at the time.

When the McDonald’s was first built on the south end of town (in the area where Whole Foods is today), people wondered what in the world the developer was thinking. The restaurant had been plunked down into the middle of a corn field and there wasn’t much else around. But gradually development caught up and several neighborhoods were built between Prospect and Drake in those years. 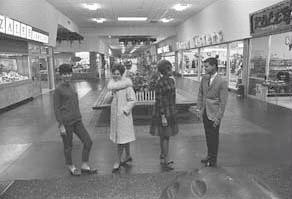 University Plaza (shown here in 1966) was a hip new place to shop.

There were a few cruising stories that I particularly got a kick out of when I hung out with the Pioneer Women.

Linda grew up along College Avenue. So when her friends were headed out to go cruising, she’d tell her parents that she was going to go study at the library. But that meant that every time they cruised near the area where she lived, they’d have to detour towards the high school and take Remington for a block or two.

Linda also remembered back to riding in her friend Joyce Brandenberg’s car. Joyce grew up on a farm way out on Shields and she needed the car to get to school. But it also meant that she had a car for cruising before any of the other girls did. McDonald’s had a give-away once where they were handing out little banks. So the girls affixed the bank to Joyce’s dashboard and they’d toss in nickles and dimes to help cover the cost of gas.

Kathy had a friend who’s Oldsmobile was so old that it used up more oil than gasoline. So they’d have to pull off at Black’s gas on E. Mountain now and again and ask to have the car filled up with oil. The owner kept a drum full of oil that he’d taken out of other people’s cars and he’d use that to top it off. 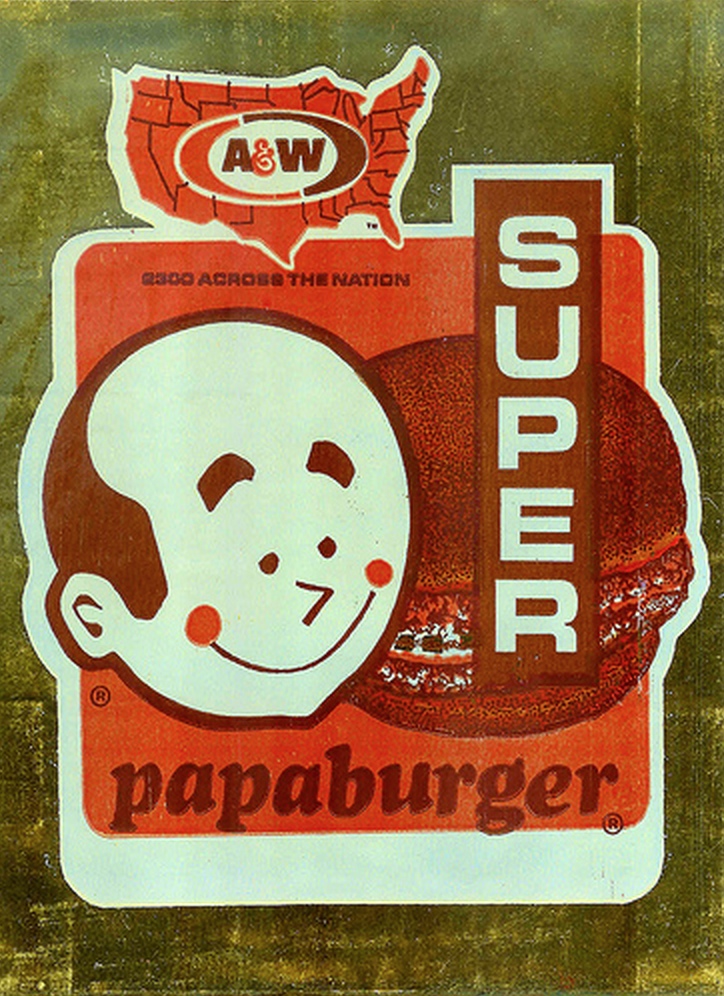 Venus experienced her first accident while cruising College. Unfortunately, the vehicle that she hit was, as she put it, “white with lights on top and the words ‘POLICE’ on it.” As she points out, she was able to use the story to her advantage when teaching her own kids to drive.

Dave says that his grandma would hop in the car on a Friday night and cruise college with her husband Bill. When the kids saw her they’d say, “there goes David’s grandma.”

Of course, as Chris said on Facebook, “Meg, there are as many stories about ‘cruising College’ as there are members of this page, if not, 3 or 4 fold, or perhaps even more.” So while I’d love to include them all, I’m going to have to leave it here. But if you want to read more, follow some of the links for the posts listed below.

And THANK YOU to everyone who shared details and stories from their time as teens in Fort Collins. It really is a delight to learn from you all.

I gathered a lot of my information from this article through two main sources. One was a luncheon with the Women Pioneers on March 6th, 2015. And the other was from the group “You Know You Grew Up in Fort Collins, CO if you remember…” on Facebook. In case anyone is interested in going back through the Facebook posts and rereading what people have said, I’ll include the links here, listing them by author and date. There are many more than what I’ve listed here. But these had the longest conversations and the most information in them.

The image of the three 1964 cars came from AllPar.com: The Massive Site for Mopars.

The 1965 ad for A&W came from VintageAdBrowser.com.

The photo of the A&W people was found by Kirk Petty and was likely from the Roadside Architecture website.

The photo of University Plaza is from the Fort Collins Archive (C00901).

The photo of the A&W Papaburger wrapper came from Vintage Roadside’s Flickr page.