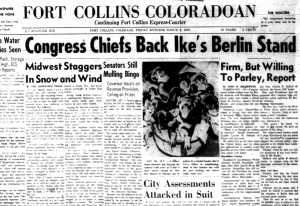 On March 6, 1959, the Cold War was in full swing and a pivotal issue on everyone’s mind was the state of Berlin. Not only did the front page of the Coloradoan reflect this, but a political cartoon inside the paper mirrored this concern as well. The Berlin Crisis lasted for three years and finally peaked in 1961 with the building of the Berlin wall. 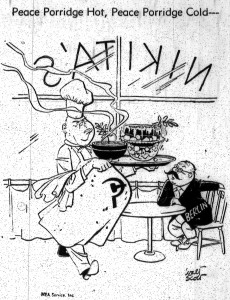 Nikita Khrushchev serves up his version of peace in Berlin.

Other topics on the minds of Fort Collins residents were weather and snow pack levels, realtors holding a conclave in town, talk (and strong opposition from some small towns such as Laporte) about consolidating school districts across the state, and news that the Pioneer IV spacecraft had gone silent.

A civil suit had also been filed against the city alleging that assessments used to finance city-wide water and sewer improvements were passed improperly (with only one reading by the city council instead of the required two) and that it wasn’t a uniform tax (being levied only against developers) and was therefore illegal. The assessment ordinances had been passed in 1957 in order to pay for development as the city grew. It’s interesting to note that taxing development today is considered par for the course as it’s understood that new development almost always requires improved infrastructure.

In sports news, the All American basketball team for 1959 had been chosen. Players included The Big “O,” Oscar Robertson of Cincinnati, Jerry West of West Virginia, Bob Boozer of Kansas State, Bailey Howell of Mississippi State, and Johnny Cox of Kentucky. 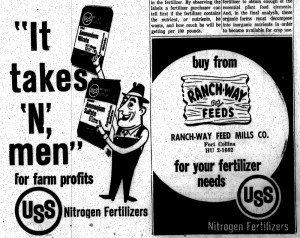 There were several reminders that Fort Collins was a farm town, including many advertisements for nitrogen fertilizers. Nitrogen was apparently the magic ingredient for a productive farm. It’s also interesting to note in the Ranch-Way Feeds ad that their phone number was still a combination of letters and numbers. 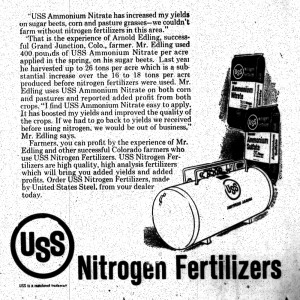 Here’s one more flashback ad. The Steele Lumber Company was located at 281 North College (in the same building where city offices are now located). The company’s tagline was, “Lumbering along since 1897.” 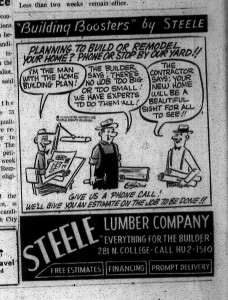 Do you have memories of the Berlin crisis? the consolidation of school districts? the Steele Lumber Company? We’d love to hear your thoughts and memories. Please add your comments below.