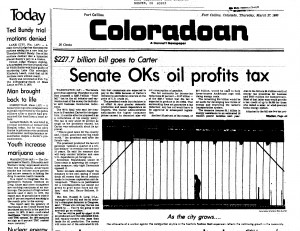 The front page of the Fort Collins Coloradoan on March 27, 1980.

Every week I think to myself, “What if looking at this date in this year is only going to bring up boring stuff that was no big deal and that no one will even remember, let alone be interested in?” And every week there’s something smack dab on the front page that whacks me in the face and reminds me, “History is always happening. Even on this day in 1980. History is made every day.”

As if Jimmy Carter and the energy crisis weren’t HUGE in their own right, you’ll note that Ted Bundy is mentioned in the upper left hand corner. And that strange silhouette of what looks like a man behind bars… that’s a construction worker at work on the addition to the Foothills Mall. I about jumped out of my socks when I saw that. Could there be anything more timely to look back at than the construction of the mall addition when we stand at the cusp of that same addition about to be demolished? Every week I trot myself down to the Fort Collins Archive to look through old newspapers and every week I’m utterly tickled by what I find.

So let me back up and review these headliners quickly. After the second oil crisis in 1979, President Carter decided that the U.S. needed to rely less heavily upon foreign imports. He deregulated oil prices, which enabled U.S. oil output to rise and led to a drop in foreign imports. He also placed an extra windfall tax upon oil producers. As you can see in the headline above, the Senate approved Carter’s tax plan.

Serial killer, Ted Bundy, had been returned to prison in 1978 after having escaped for a second time. According to this edition of the Coloradoan, 50 motions for a new trial were dismissed by a circuit judge. One motion claimed that a hypnotist had put the jury under a trance. Bundy was eventually executed (by electric chair) in 1989.

And the Foothills Fashion Mall? Well that was originally built in 1973 on the outer edge of town. It has since undergone two expansions. The first is the one mentioned in this 1980 edition of the Coloradoan. And the second came in 1989. 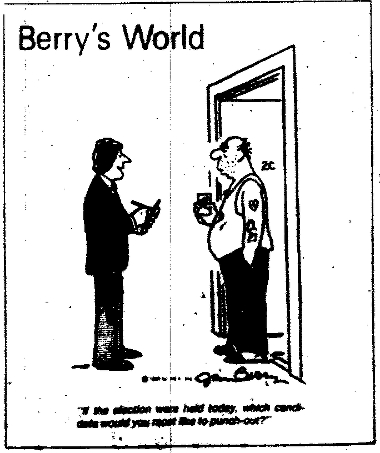 “If the election were held today, which candidates would you most like to punch out?”

The election campaigns of President Jimmy Carter and presidential hopeful Ronald Reagan were in full swing in March, 1980. But there wasn’t a whole lot about it in the paper other than this cartoon. 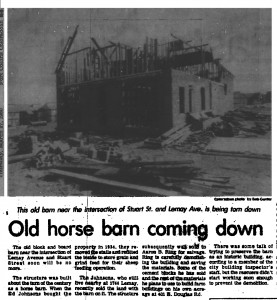 A barn near the intersection of Stuart and Lemay was being torn down in 1980.

A barn near the corner of Stuart Street and Lemay Avenue was being torn down. It had originally been built at the turn of the century to house horses. When the property was bought in 1934 by Ed Johnson, he removed the stalls and turned it into a place to store grain for his sheep. There had been some talk of preserving the building, but action wasn’t taken in time and the demolition proceeded. Aaron B. Ring bought the building for salvage and planned to reuse some of the wood to build some structures on his property on East Douglas road. 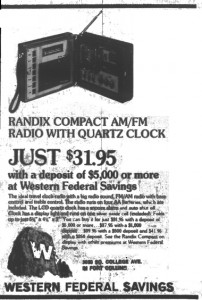 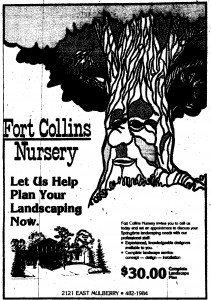 This ad might look familiar, even to people who are new to the area. The Fort Collins Nursery continues to use this same tree image in their ads and on their website today. 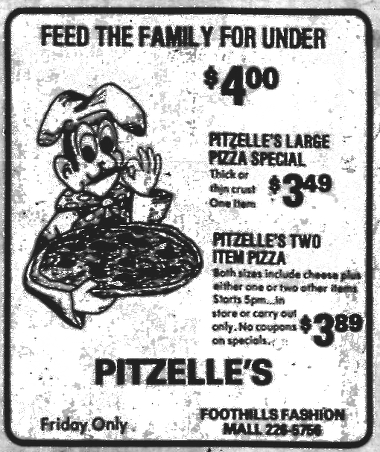 Several of the ads in the paper were for businesses within the Foothills Fashion Mall. The mall was the place to be. Pitzelle’s pizza had a great deal on large pizzas for under $4 each.

The picture in the ad for the Aggie Liquor store is hard to see in this copy, but the prices look quite nice. 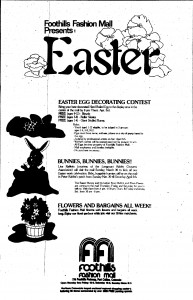 Note the old logo for the mall, two Fs that also form an M. The mall’s current logo is a triangle that is sliced at an angle to mimic a mountain with foothills.