On this day in the year of George Orwell…. 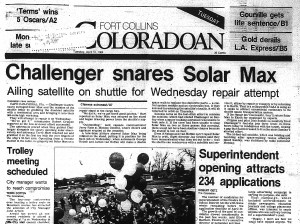 I can’t see the number 1984 without immediately thinking of George Orwell. I find it hard to believe that we’re thirty years past the date of his futuristic vision.

When you glance at the front page of the Coloradoan from April 10th, 1984, the first thing that might jump out at you is the mention of the space shuttle Challenger. The crew’s mission was to repair a broken satellite. The Challenger’s mechanical arm was used to grab the satellite and haul it into the dock of the space shuttle. But of course we know what happened to the Challenger less than two years later. I was in my third period chemistry class when they made the announcement that the Challenger had exploded. (Feel free to add where you were on that day in the comments below.) 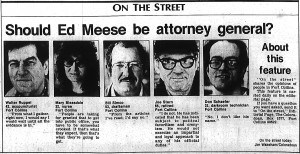 “On the Street” sought input from Fort Collins residents on various issues.

Other front page news included President Ronald Reagan getting into hot water over his Nicaragua policy, 234 applicants for the open school superintendent position, and what sounds like riotous debate over running the trolley along Mountain Avenue. A development foundation was also started in the Poudre School District to raise private funds for the district to enhance education, to improve communication with the community, and to establish links between the district and local cultural and social resources. I find that article particularly ironic given that I hear much of the same talk from the district today (not that it’s been accomplished, but that something should be done towards similar ends). 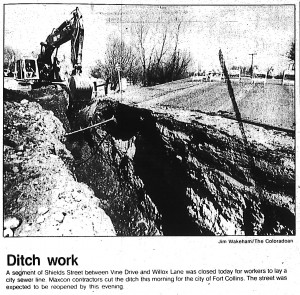 A city sewer line was laid under Shields in 1984. Work is being done around the same part of Shields today.

“Terms of Endearment” had just won five oscars. And Rosalynn Carter’s book, “First Lady from Plains,” came out in which she explained how bitter she was when Jimmy lost the election in 1980.

There was an interesting letter in the editorial section from Louie Congdon, a visitor from Seattle, Washington. Louie wrote that he hopes the residents of Fort Collins would approve a proposed swimming pool/ice rink complex. His argument revolves around a 16-year old gal from Washington, Rosalyn Summers, who had just won a silver medal in the Olympics. Louie pondered what Rosalyn’s fate would have been had she grown up in Fort Collins where there was no ice rink. Edora Pool Ice Center (EPIC) was built the following year (1985).

Colleen Rittenhouse was the athlete of the week.

Most of the ads in the paper had to do with getting your taxes done or paying into an IRA. But there were a few that caught my eye. 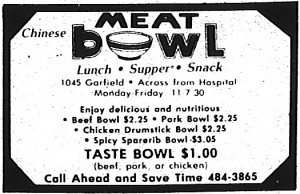 Chinese food from the Meat Bowl, right across from the hospital. Hmmmm… 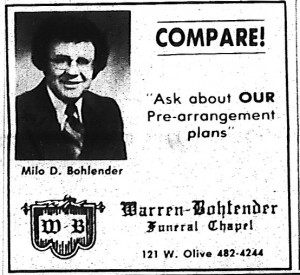 The Bohlender Funeral Home is a Fort Collins staple. Have you made pre-arrangement plans? 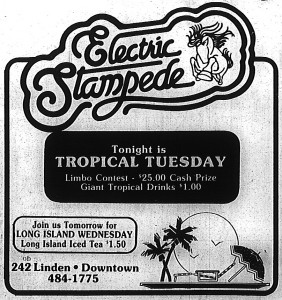 Looking for a little fun? Check out the Electric Stampede.

The date of EPIC’s construction came from a short pdf document by the city about the Edora Park.