“Water is the driving force of all nature.” – Leonardo da Vinci 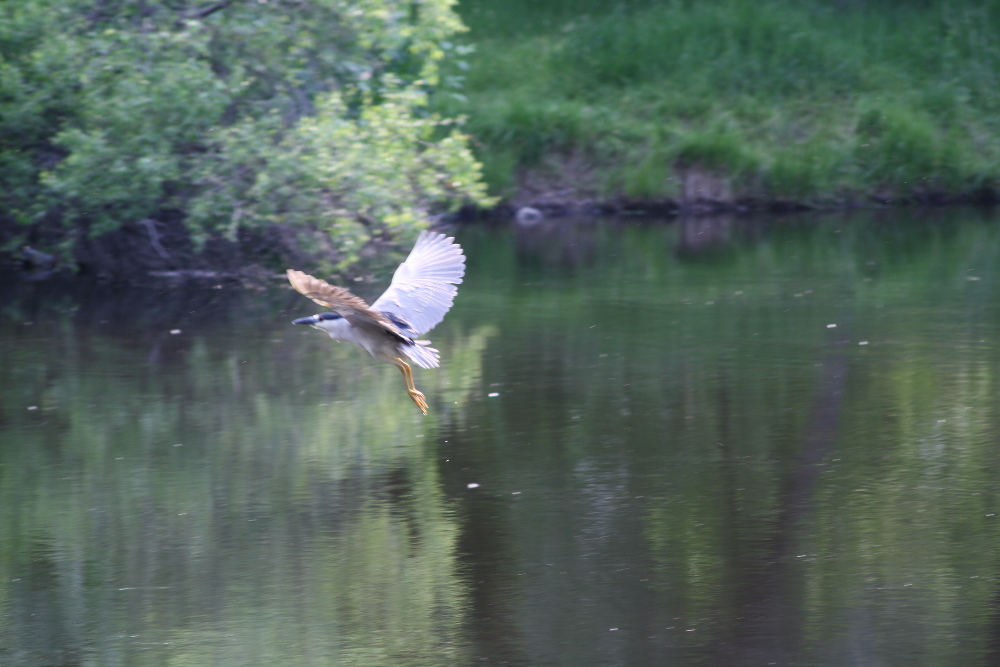 Although our recents floods and record rainfalls might belie this truth, Colorado is an arid land. According to the Western Regional Climate Center, Fort Collins averages 15.08 inches of rain a year. Compare that to Philadelphia (41.53 inches), Atlanta (49.71 inches), and San Francisco (20.78 inches). The fact that anything can grow at all away from the waterways is nearly miraculous.

The early settlers in the area must have figured out pretty quickly that they were going to have to irrigate their fields. In the 1860s, there was no red tape involved in digging a ditch from the river and running it to your fields. If you needed the water, you took it. It’s what everybody did and the system worked just fine… for a time.

In the summer of 1874, there was a drought that made farmers rely more than ever upon the irrigation ditches that they had run to their fields. In fact, the folks around Fort Collins diverted so much water out of the Poudre River that the farmers down in Greeley were left with nothing, despite the fact that many of them had dug their ditches before the folks in Fort Collins. Thus began Colorado’s first foray into the water rights arena.

Colorado water rights proceeded from a line of thinking held by miners – the first to find the gold was the first who could stake a claim to the area. In the same way, the first to divert water for use was the first in line to claim rights to that water. This contrasted with the eastern way of thinking in which anyone who owned land which water flowed through was allowed use of it. (So if you have a river, stream, or ditch running through your property in Colorado today, the land may be yours, but unless you have established water rights, the water isn’t.)

Meeting announcement for the Dry Creek Ditch Company in Laporte. From the May 20, 1874 Fort Collins Standard.

In order to build ditches that would serve more than just the folks directly along the river, irrigation companies were formed. The companies not only planned the routes of the ditches and organized men to dig them, but they also continued to operate the ditches, hiring people to open and close the gates and legal folks to guard water rights. 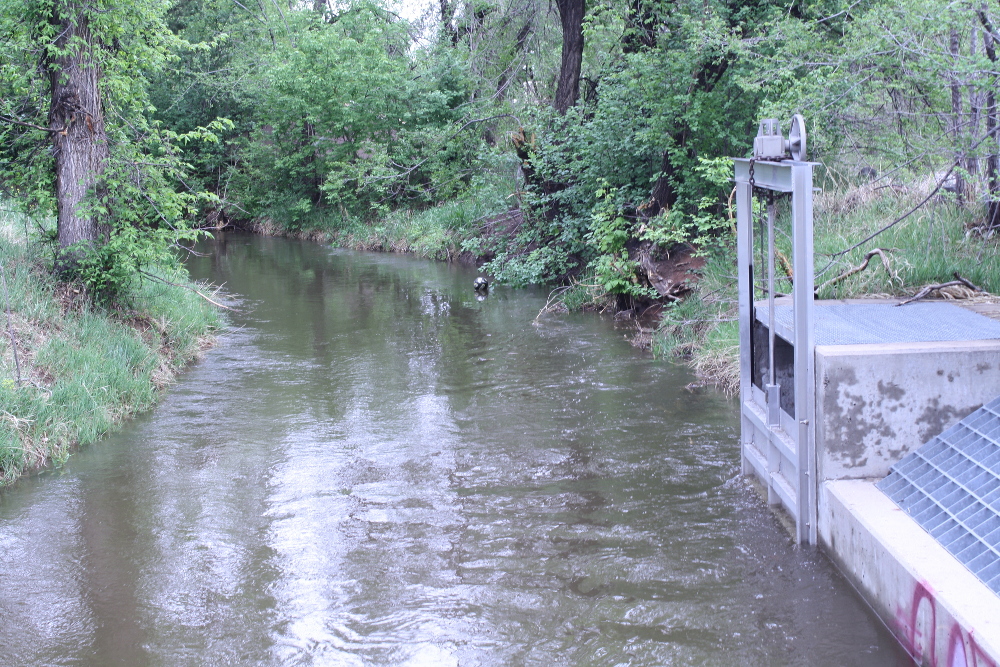 The number 2 ditch (or Larimer County Canal Number 2) gets its start in Laporte, just north of the Brinks property. It parallels the New Mercer canal for quite a ways, sometimes separating but then returning to courses near each other on several occasions. It runs to the west of Lincoln Middle School and through City Park. It wends its way through Rolland Moore Park, near the Foothills Fashion Mall (where its channel was recently redirected), and finally to Warren Lake, where it splits. Ditch #2 officially ends at the lake and an offshoot, called the Mail Creek Ditch, proceeds towards Bacon Elementary and Kinard Middle Schools.

These irrigation ditches were called “reclamation projects” with the idea that they would enable settlers to reclaim the land for human use. Not only would the irrigation allow them to grow crops they otherwise could not grow along the Front Range, but there’s a story in the October 14, 1874 Fort Collins Standard of a rancher in Nevada saving his grain fields by flooding them with water from an irrigation ditch and leaving it on the field until he was sure all of the newly hatched grasshoppers had drowned. Though his neighbors suffered huge losses from the little beasties, his fields remained largely untouched.

The red rooftops are Ram’s Village at Elizabeth and Constitution. Note the New Mercer ditch defining the western boundary of the project and ditch #2 outlining the eastern edge. The ditches weren’t in use when Google’s satellites took this image, so the beds are dry.

Even more so than the train, these ditches run through neighborhoods and parks throughout our city, often creating boundaries that delineate outer edges of communities. But thanks to bridges, and in Old Town a complete burial of Arthur’s Ditch, we don’t tend to mind their intrusion upon our city. 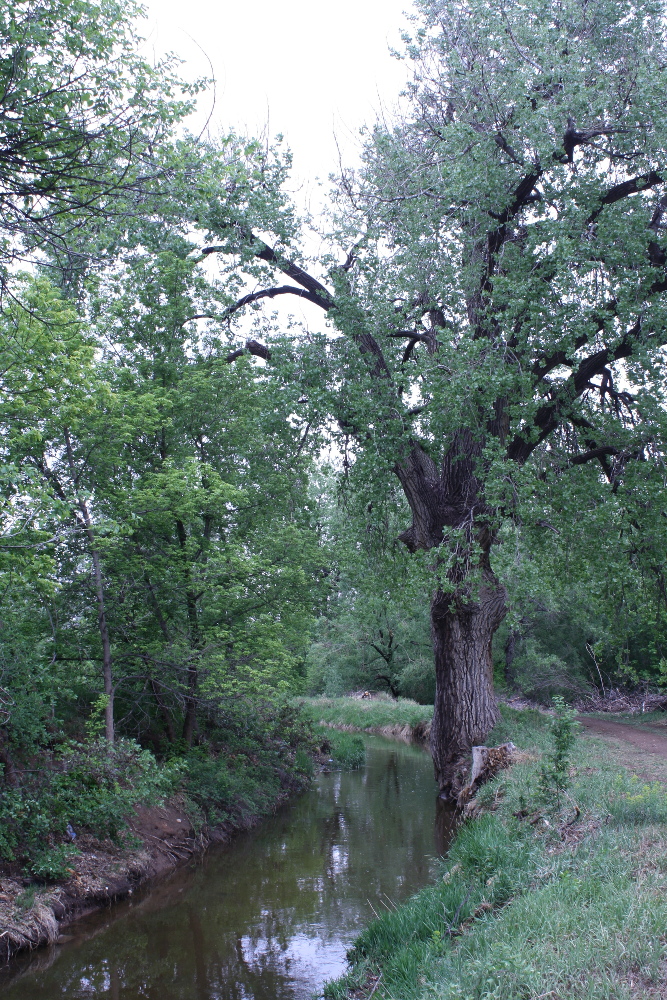 A tree growing by the #2 ditch.

If anything, I think people appreciate the the unimproved nature of our ditches. While some cities have built cement waterways (which help reduce the loss of water due to it seeping into the ground) or have enclosed ditches entirely (which also protects from loss of water due to evaporation), Fort Collin’s waterways are havens for wildlife that use the banks of the irrigation ditches as routes through human development. 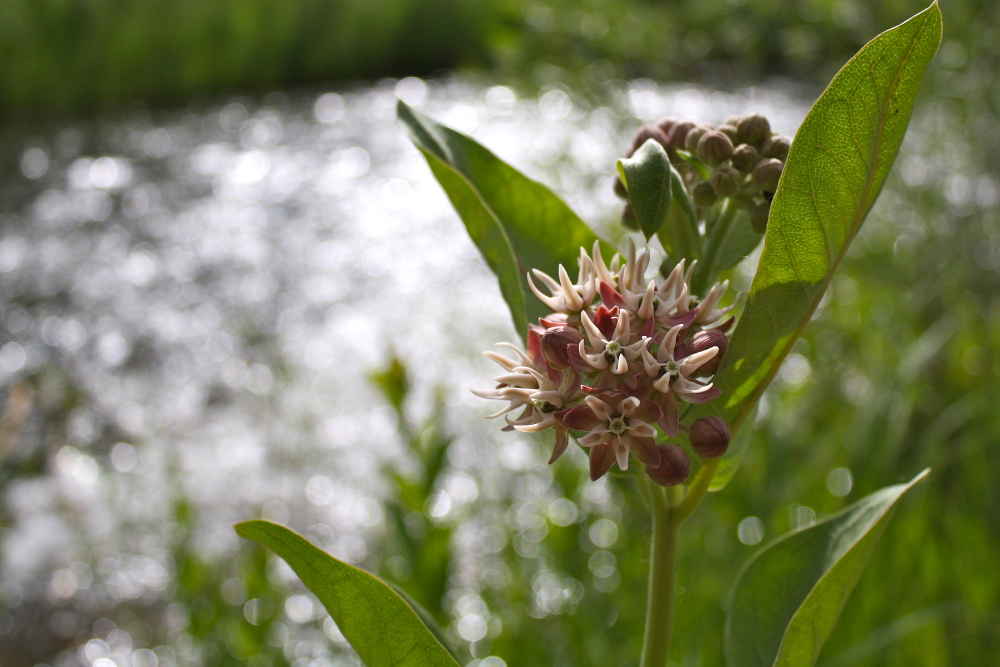 Milkweed growing along the Poudre river.

North Forty News carried a story in April about a ditch company that may very well have saved Fort Collins from far more damage from the fall floods than we experienced. While Lyons, Loveland, Greeley and others suffered incredible damage, Fort Collins seemed to be able to handle the flooding far better.

Through luck and sacrifice, Fort Collins was spared a great deal of damage.  Weld & Larimer Irrigation, a local ditch company, may well have saved our town by opening the Weld & Larimer Irrigation ditch and the Poudre Valley Canal in order to lighten the load upon the Poudre river. The actions of the ditch company resulted in $50,000 worth of damages to the ditches themselves, but they might very well have been what kept the river from pouring down East Vine and swamping the three colony neighborhoods of Altavista, Buckingham, and Andersonville.

The ditches in and around Fort Collins shape our city in ways we often don’t recognize. By “ditching” Fort Collins, we have reclaimed the land for our own benefit.

Prairie Dogs to Paradise: Irrigation Around Fort Collins, 1860-1880, an unattributed article posted online by the Fort Collins Waterways folks, gives a nice overview of the ditches of Fort Collins.

The Bureau of Reclamation: A Very Brief History provided an explanation on why these projects were referred to as “reclamation projects.”

The city’s Irrigation Ditches Brochure helped me to track where ditch #2 traversed. (I’ve seen it at various points, but it’s not like the ditches come with signs letting you know their names.

Access to the Fort Collins Standard‘s of 1874 were thanks to Colorado Historic Newspapers.

How the Ditch Company Saved Fort Collins, is an article from the April 20, 2014 edition of North Forty News.

The overhead shot of Ram’s Village is thanks to Google Maps.

More on Water in the West can be found on the National Park Service site.