After World War II, the economy was booming. In the 1920s, as cars were first becoming popular, they were a status symbol dividing the haves and have nots. But in the 1940s and 50s, the automobile hit the mainstream, enabling a more individualistic and spread out culture as people were no longer tied to public transit lines. The Chamber of Commerce adopted a new slogan in 1946, “Fort Collins E-X-P-A-N-D-S.” Suburbs popped up to the west and south of the city. And downtown began to get a makeover. We were now a part of the Atomic Age with a feeling that Science was going to be the answer to all of mankind’s problems. This belief is reflected in the architecture of the time which relied heavily upon prefabricated parts, expanses of glass and metal, and which avoided excessive decoration.

If you compare these photos of Post War architecture to those in the whirlwind tour of Historic Fort Collins architecture that I posted in April, there’s one striking difference that is reflected in the pictures. With the older architecture, I was generally able to stand between the building I was photographing and the trees and cars that stood in front of it, enabling me to get photos that showed entire buildings without obstructions. In these photos of Modern architecture, on the other hand, you’ll see cars and trees, and very often you still won’t see the entire building in the photo. These mid-century buildings were shaped very differently than previous structures had been. Houses tended to be one-story tall and very long. Many commercial buildings, on the other hand, went vertical – some climbing to 10, 11, or 12-stories in height.

The Modern Movement in architecture is an umbrella term that covers several styles: Art Deco, Googie, International Modern, Moderne, and various other iterations. I believe that most of the commercial buildings and many of the houses shown here would fit under the International Modern style, but I’m not a trained architect, so that’s really just a guess. Characteristics that typify the International Style include flat roofs, asymmetrical massing, ribbons or strips of windows set right against the facade, and little to no decoration.

To see any of these images at a larger size, simply click on them. 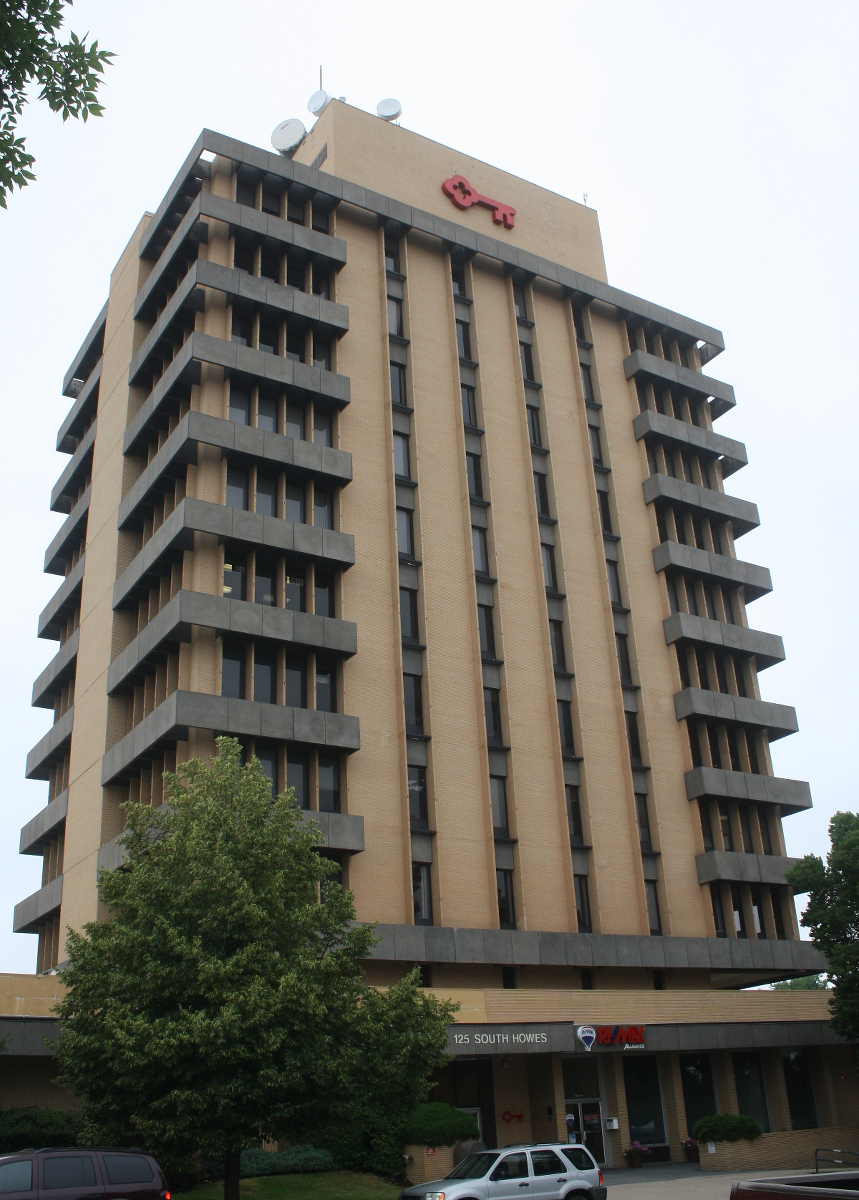 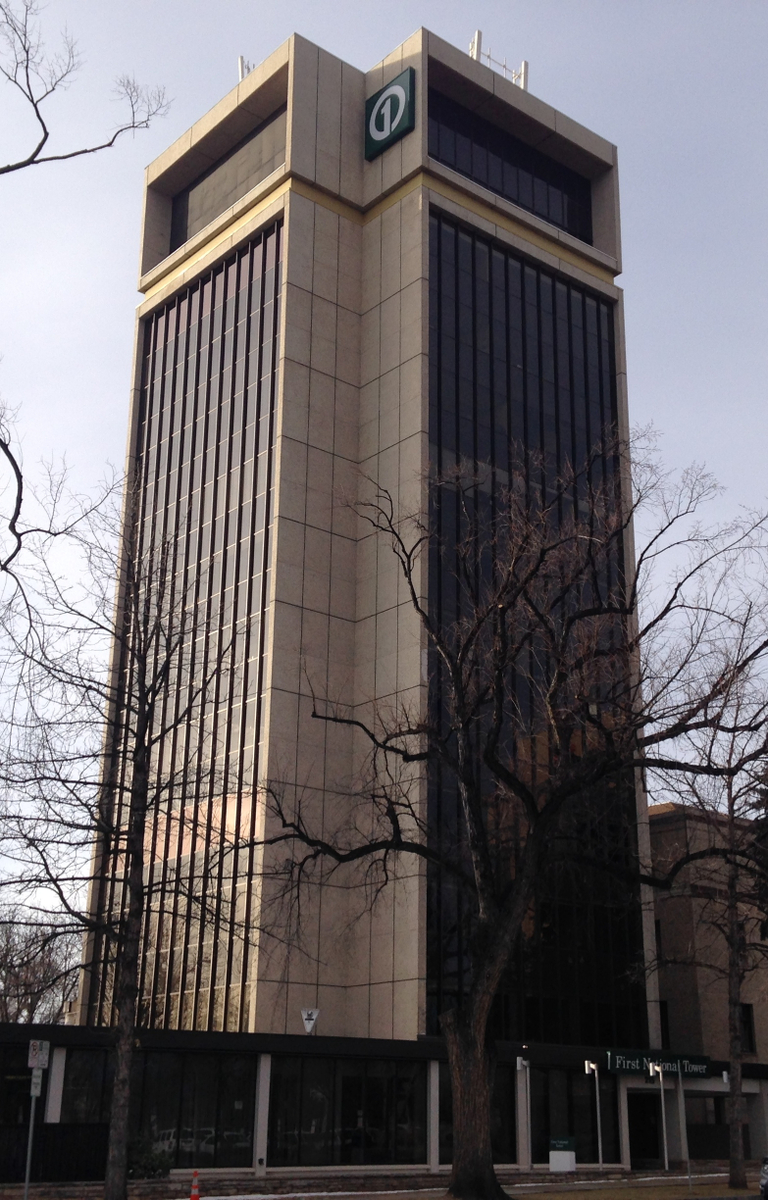 First National Bank – 205 W. Oak St. (1968)
This 10-story building (158 ft.) is in the International Modern style as shown by the strong vertical and horizontal lines, the swaths of glass, the flat roofline, and the stucco materials. 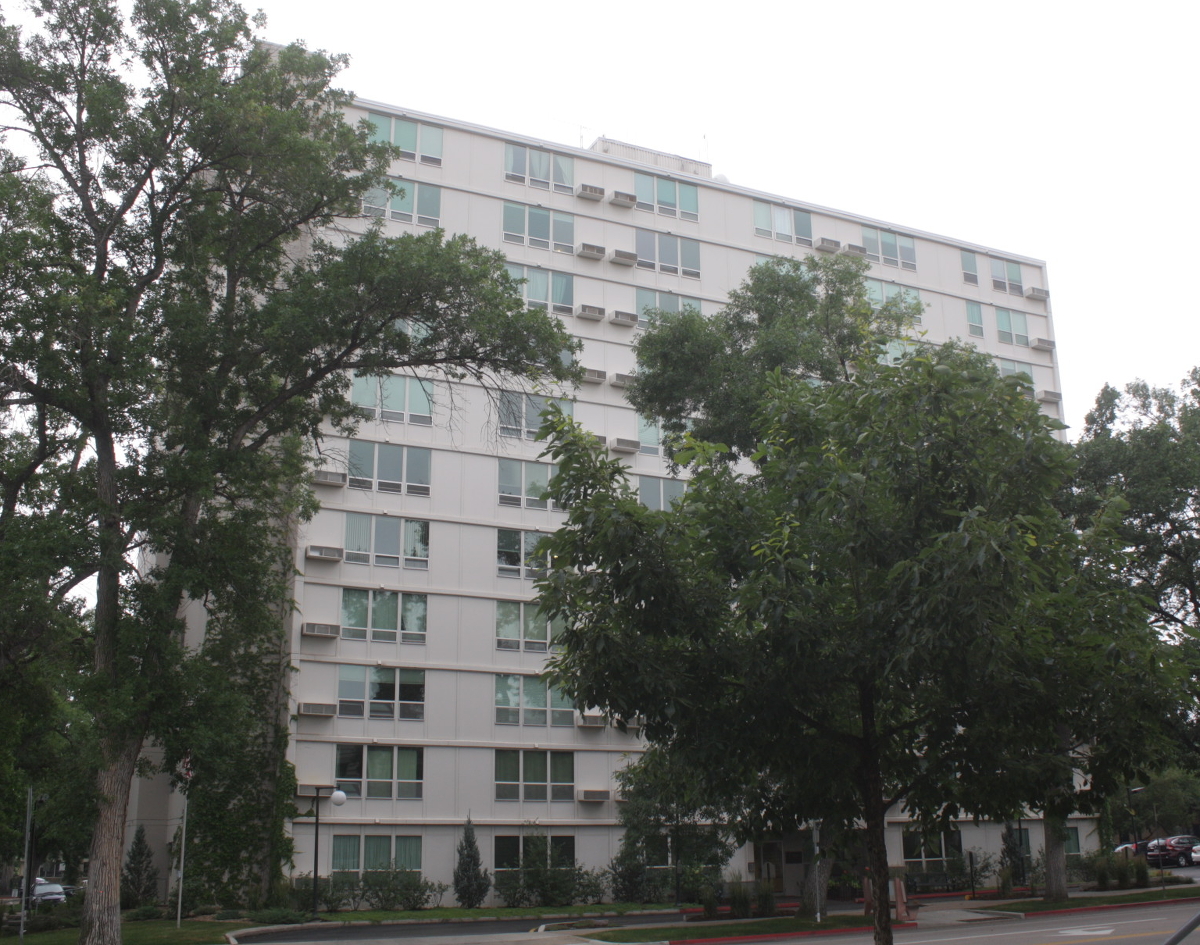 DMA Plaza – 300 Remington (1973)
The DMA Plaza outdoes the other two examples of International Modern shown here so far in terms of having no decoration. This building is both wide and tall and has very strong vertical and horizontal lines.

Sports Authority (Safeway) – 425 S. College Ave. (1966)
This may be one of only two Googie style buildings in Fort Collins. The other is the Butterfly Building on Laporte that was included in my last architecture post. The swooping roofline and wide eaves are distinctive Googie features. But note that there are still strong vertical and horizontal elements and swaths of glass, which seem to be signature components of modern architecture. 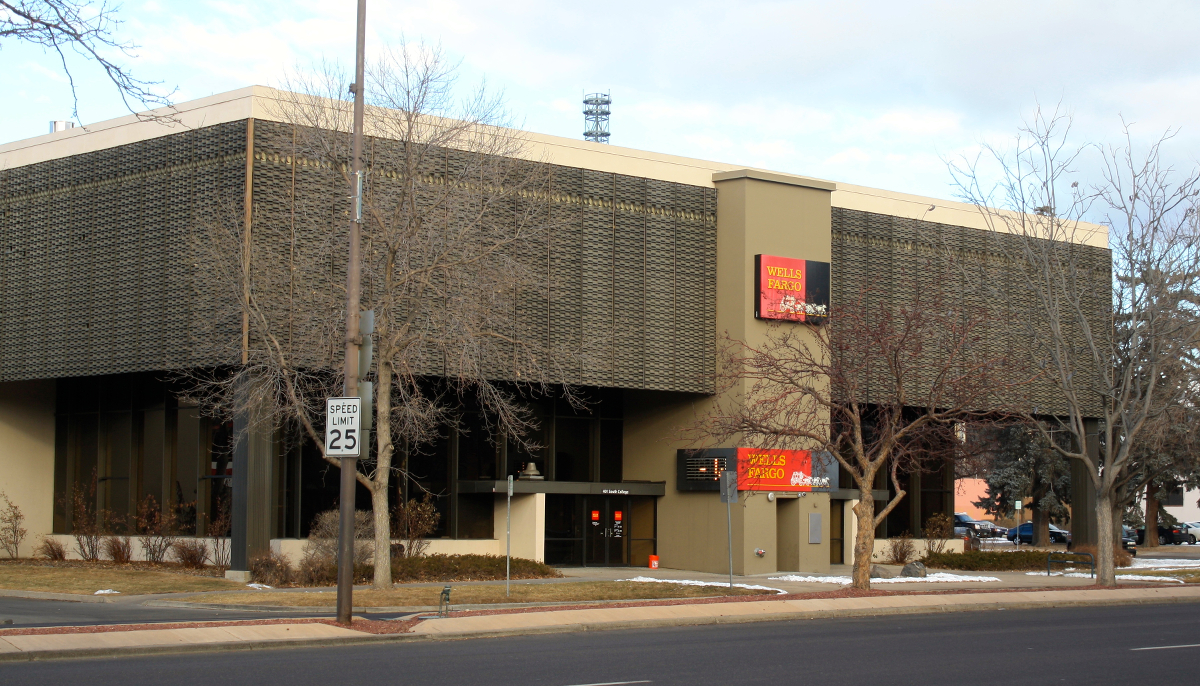 Wells Fargo Bank Building (Poudre Valley National Bank) – 401 S. College Ave. (1967)
Although this building is in a Modern Movement style, it has a decorative screen made up of rectangles and circles across the top level of the structure. There are still strong vertical and horizontal elements creating a boxy look. Square supports with a recessed first floor make the top part of this building seem like it’s floating.

Clark Hall at Colorado Statue University
This building has a decorative screen made up of multiple circles as does the Lory Center just across the way. 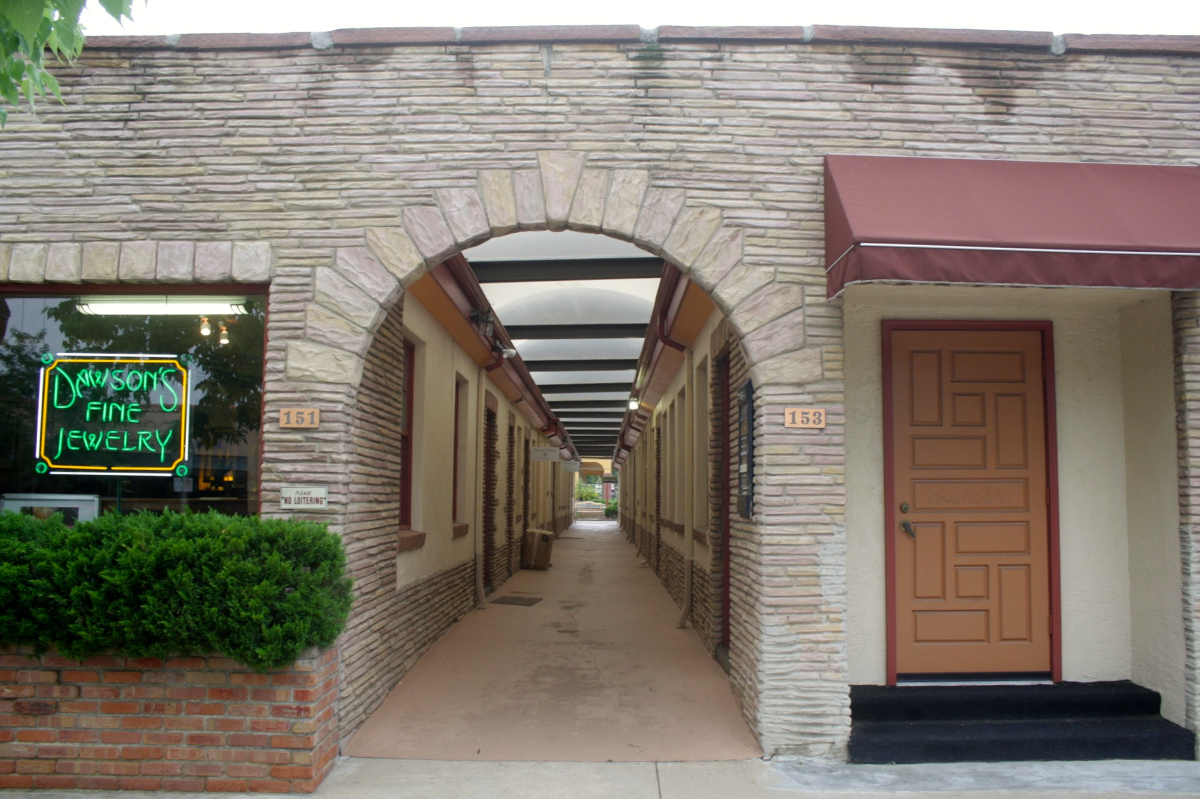 The Briggs Professional Building – 147-153 W. Oak St. (1952)
Here’s an example of a Mid-Century Modern commercial building that’s short but wide. Trying to fit the entire building into a photo produced an image of cars lined up with the building peeking out from behind. So I zoomed in on one of the entranceways instead.

Restaurant 415 (Nu-Life Cleaners and Coin-O-Mat Laundromat) – 415 S. Mason St. (1959)
This International Modern 1-story building was originally a laundry-mat and is now a popular restaurant. Note the use of decorative cement blocks in a vertical pattern along the right section of the building as well as in the tall element to the left. The blocks look similar to screens on other buildings, though these don’t appear to be screening anything. 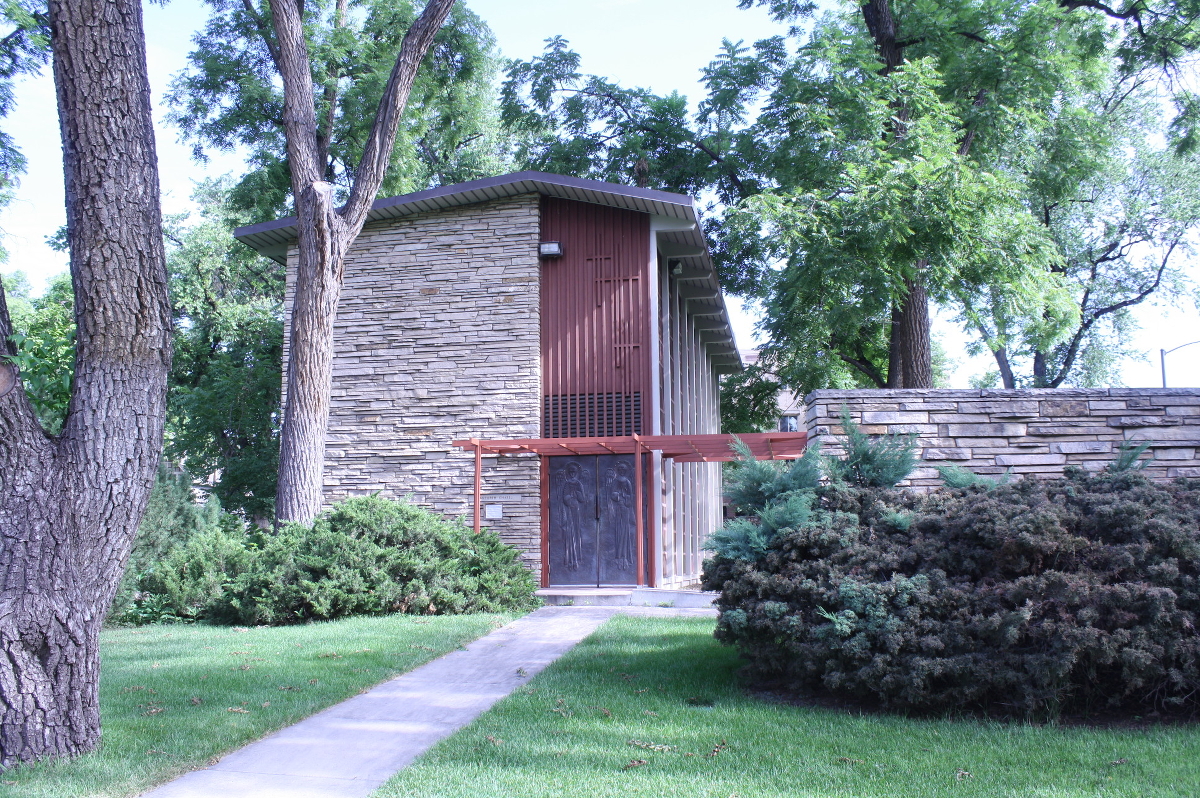 Danforth Chapel – 701 Oval Drive, Colorado State University (1954)
The Danforth Chapel at CSU was designed by James Hunter, a Boulder architect. Note the horizontal lines of stone and the vertical lines over the door. Hunter was very interested in the use of solar design in architecture. The east facing wall of the chapel is made up primarily of glass, allowing the building to be lit with sunlight in the mornings. 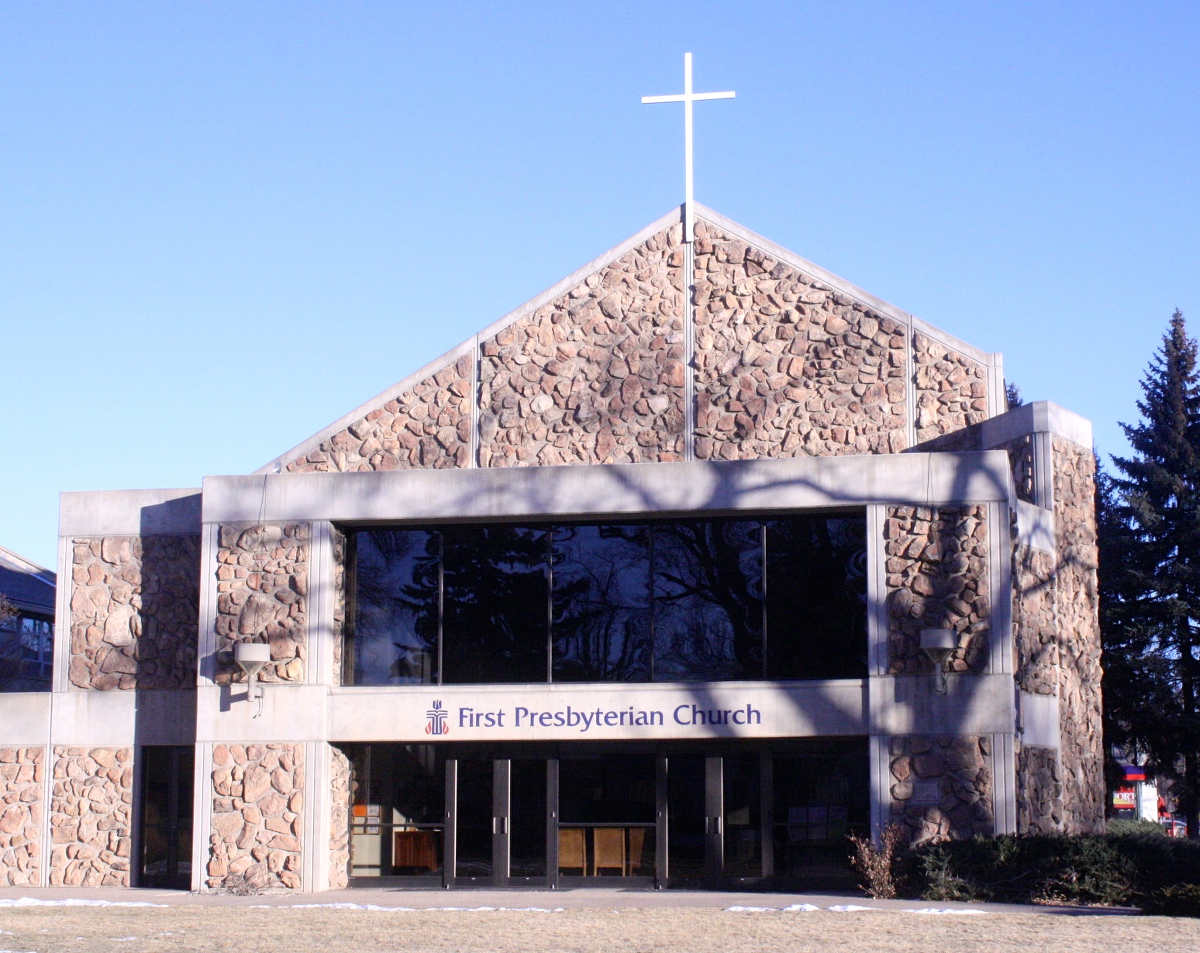 First Presbyterian Church – 531 S College Ave (1970s)
The use of pebbles and larger stones as wall texture was common in Modern building. 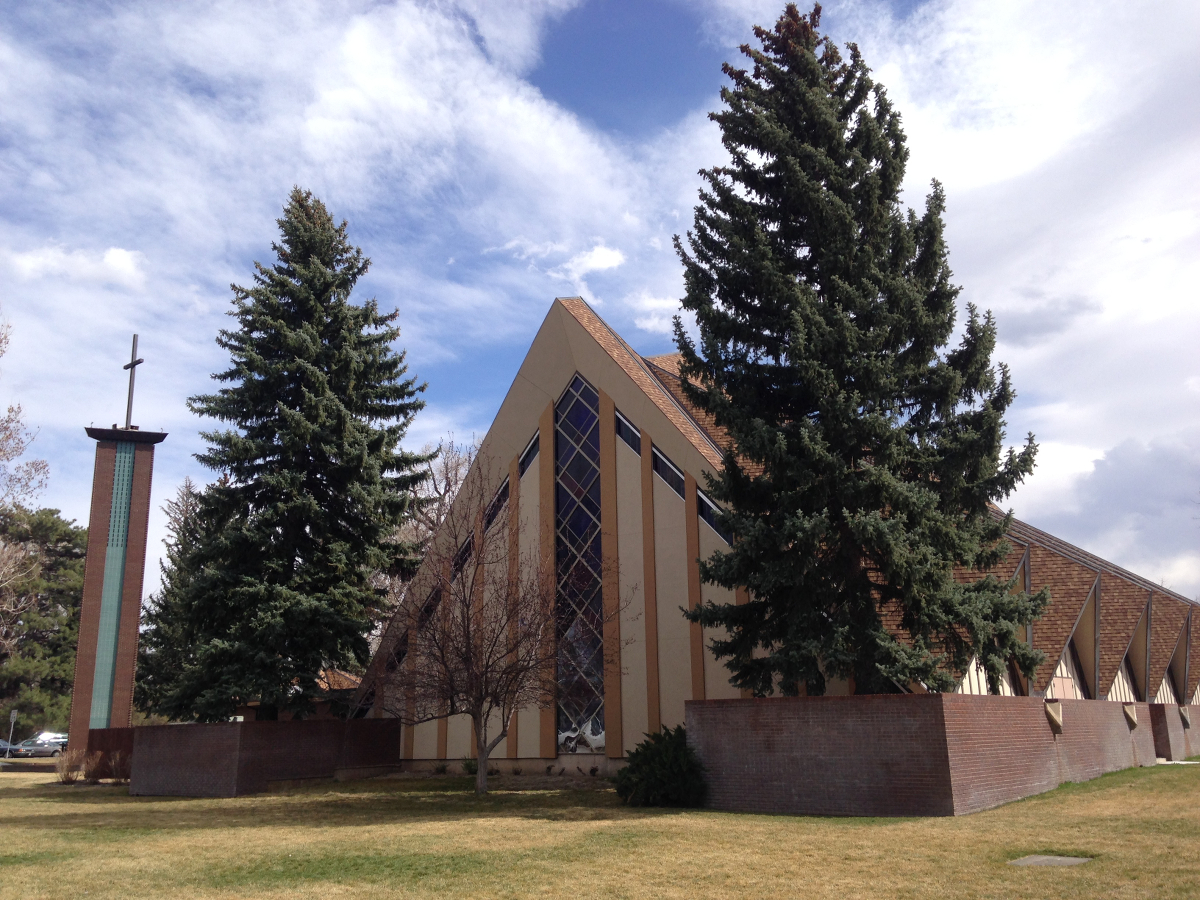 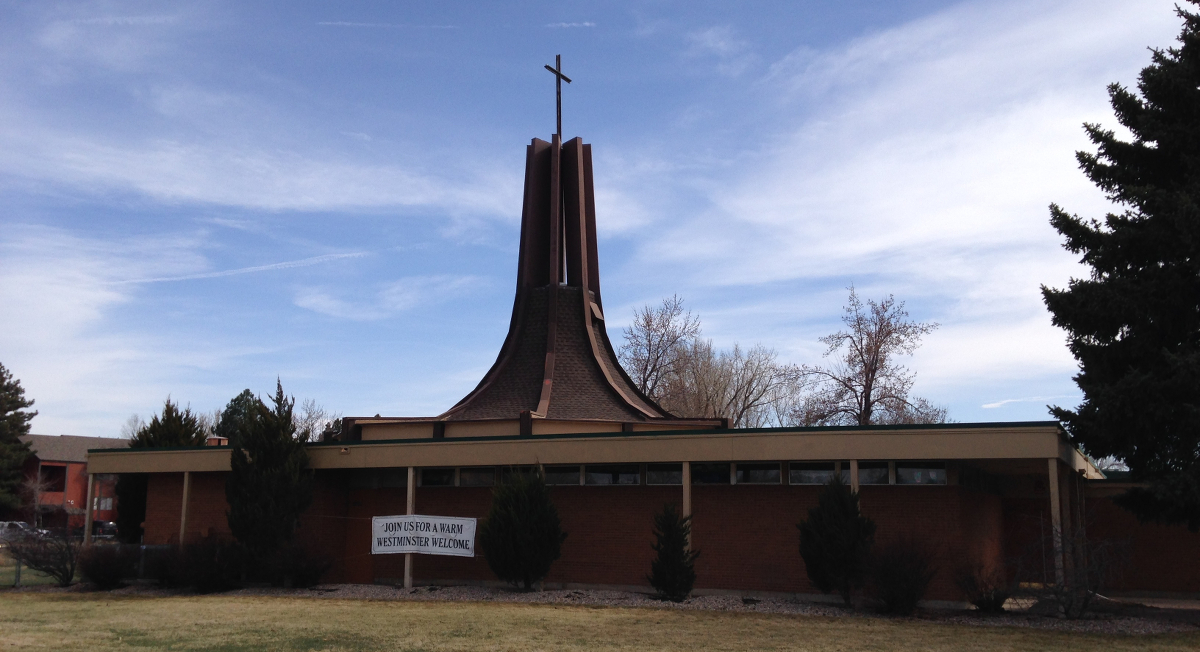 Westminster Church – 1709 W Elizabeth St (1966)
The wide eaves supported by stilts provides a simplicity of form not previously associated with churches. The roofline is mostly flat with a distinctive swooping structure at center that gives a nod to the function of the building. 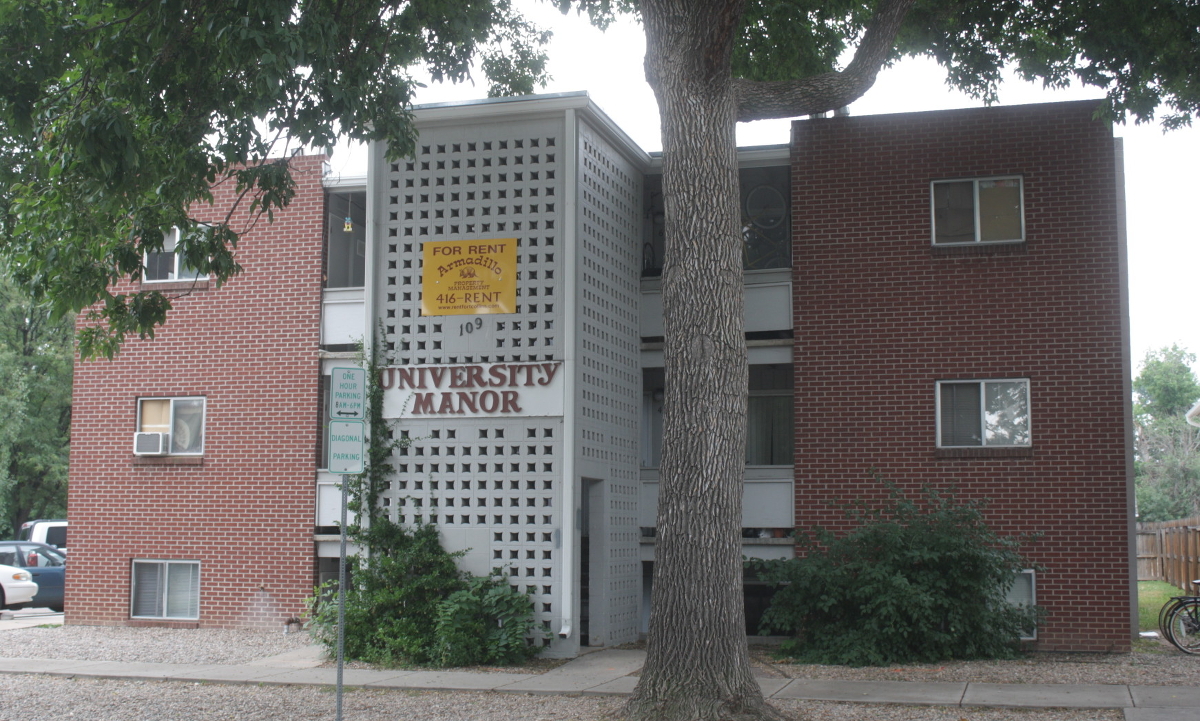 University Manor – 109 W. Myrtle St. (1961)
The flat roof, windows that lie flush with the facade, strong vertical elements and a decorative screen around the staircase all point to a Modern Movement style of architecture. 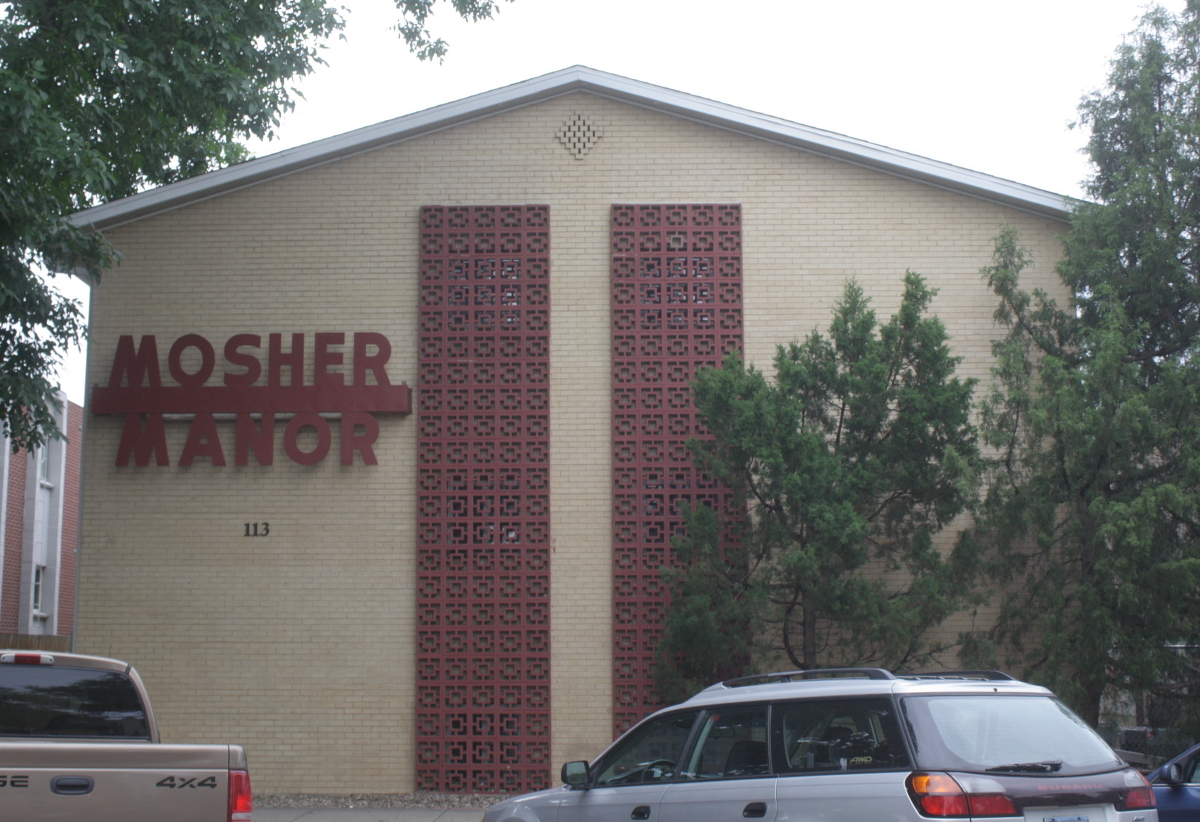 Mosher Manor – 113 W. Myrtle St (1965)
Right next door to University Manor stands Mosher Manor, with vertical screens decorating the front of the building. It’s particularly interesting to note that the door is not located on the “front” of the building. Moving doors to the side or back of a building was in keeping with Modern styles. I suspect that it was more important to the architect to locate entry ways near parking lots rather than toward the street. 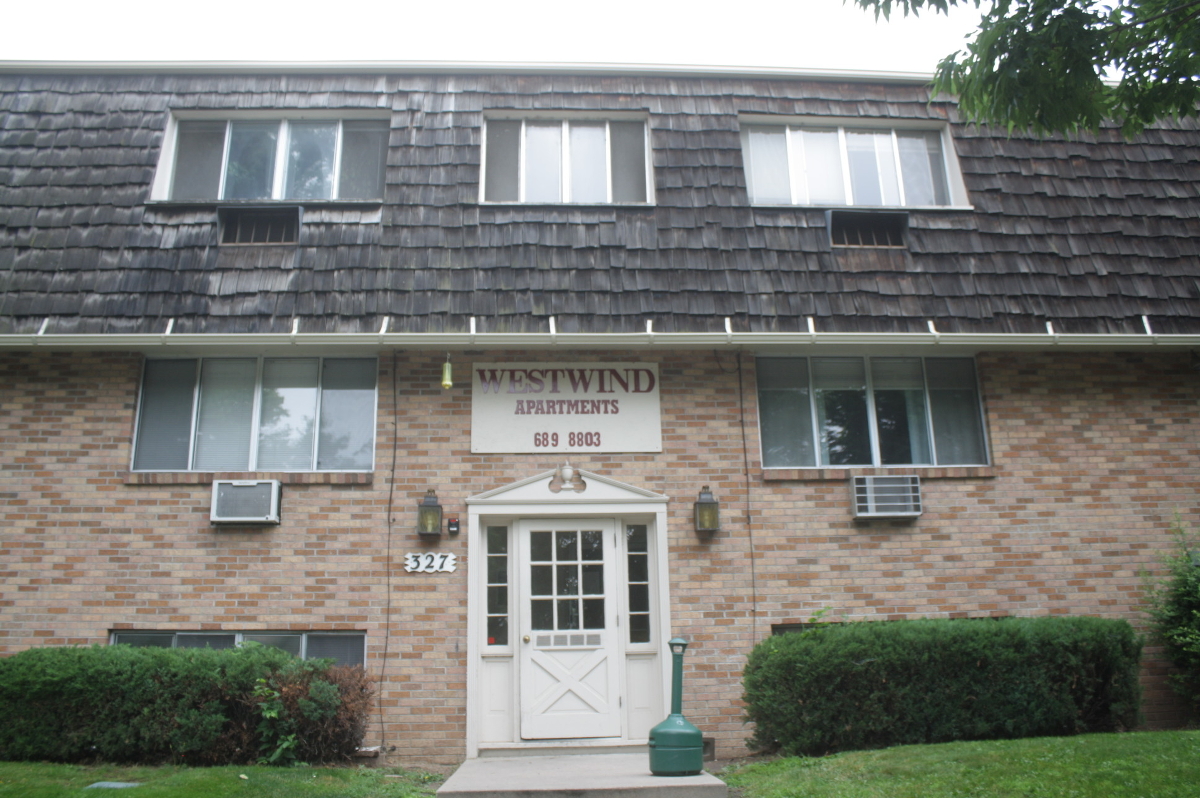 Westwind Apartments – 327 Mathews St. (1968)
The mansard roof was growing in popularity in the late 60s and is evident in several apartment buildings constructed on the east side of Old Town during that time period. This was another very long, horizontal building that I couldn’t fit into the viewfinder on my camera without including a whole row of cars along with it. So I only captured the front entrance. But the building extends quite a bit to either side. 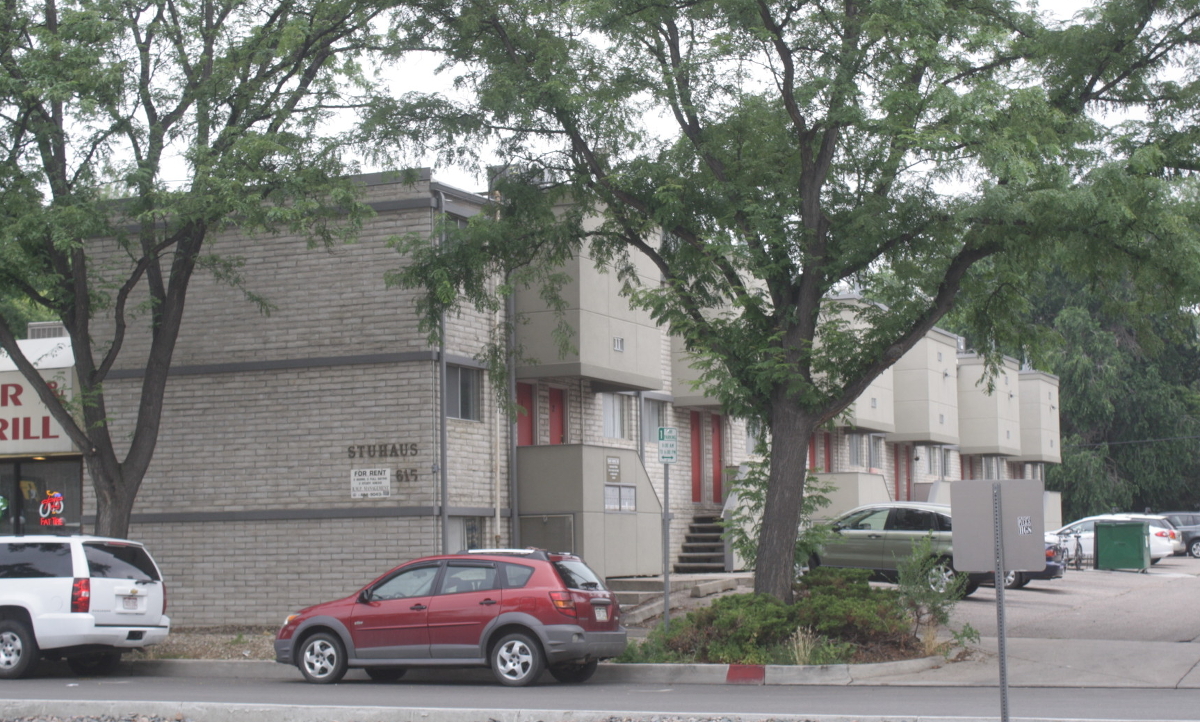 Stuhaus – 615 S. Mason (1974)
Here’s another example of an apartment complex with no street-side entrance. Instead, the doorways for each apartment are located towards the parking lot. The cantilevered construction over each entryway is typical of many Modern buildings.

712 Garfield (1964)
The neighborhoods around Lesher Middle School are full of Mid-Century Modern houses like this one on Garfield St. Though we’re used to rows of windows now-a-days, putting this many windows in a row along the front of a house was a fairly new architectural style at the time.

708 Garfield (1961)
In southern states, Modern homes were often built with flat rooflines, but in Colorado most Modern houses retain some amount of slope to help with snow melt in winter. The roofline and the difference in windows give a distinct asymmetry to this house.

1209 Newsom (1961)
This is another example of a long horizontal house with an asymmetrical design.

There are many buildings in the Modern genre that I have not covered in this post. Moby Arena, The Durrell Center, Parklane Towers, the Old Town Post Office, and many, many other buildings could have been included here.  The amount of Modern architecture that we have in Fort Collins speaks volumes about the level of growth the city was experiencing at the time.

According to William Morgan, in his book The Abrams Guide to American House Styles, the Modern esthetic was eventually rejected by home owners who preferred houses with steeper rooflines, gables, and ornamentation. If you drive through any new housing development today, it’s unlikely that you’ll see a series of ranch houses or boxy shapes indicative of Modern styles. But you do still see the Modern influence upon commercial building. The boxy shape continues to be popular in many of the new multi-family dwellings that have been going up lately. There is often little decoration (other than perhaps a swoop of the roofline over an entranceway). Windows that are flush with the facade continue to be common. And you’ll see even more of Modernism’s influence if you head down to Denver where there are new buildings being put up with predominantly glass facades.

As I wrote a few weeks back, the way we build our neighborhoods, and I’d add our commercial buildings as well, reflects our culture as a people group. The 50s and 60s were a time of great optimism. Mechanization promised to be a boon, enabling us to build more things, more cheaply, and with less labor. This is clearly reflected in the buildings of the time which were grand, not in decoration or in creating an emotional connection, but in size and prefabricated simplicity. We felt that we were at the dawn of the science age and we built structures to reflect our space-aged beliefs.

I spent a lot of time reading up on the characteristics of Modern architecture. I primarily used William Morgan’s book entitled The Abrams Guide to American House Styles, which is a fantastic book covering a broad spectrum of architectural styles. I also used Google images to get a better sense of how the characteristics mapped to commercial buildings.

Historitecture did a context and survey of many post war buildings in Fort Collins in the summer of 2011. The surveys they did on several of these buildings were helpful in naming architects and builders as well as dates of construction. There are three documents from this project that I used. The first references specific survey forms on several buildings. The second was a context for the building that took place during that time period (pdf). And the third was the general survey report of properties (pdf).

I used the Larimer County Assessor’s website to determine build dates on the residential properties.

This is a really helpful slideshow from the Office of Historic Preservation in the city of San Antonio describing the various features of Modern architecture (pdf).

Learn more about James Hunter, architect of the Danforth Chapel, in this biographical sketch (pdf).