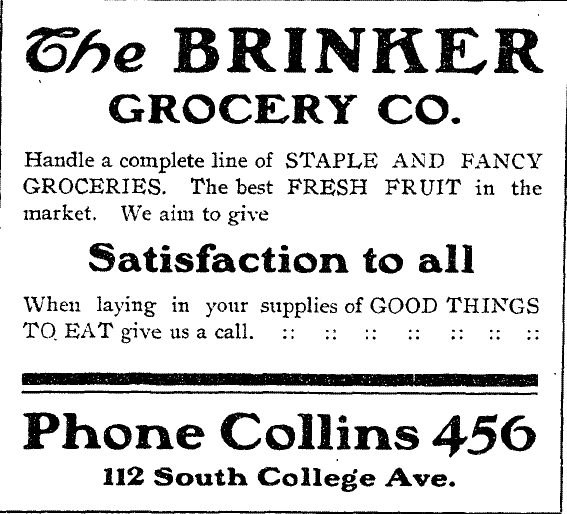 One of the first articles I wrote was on the Shanahan Block, which used to house the Brinker Grocery Co. and now hosts Starry Night Espresso Cafe.
(Over time I got good at including source information in my photo names so I wouldn’t forget where pictures came from. But I clipped this picture from an old newspaper before I got into that habit. So my best guess is that it’s from the 1920s.)

It was exactly a year ago today that I published my first post for Forgotten Fort Collins. Since then it seems like a small community has started to build around the site and especially FFC’s social media pages. I love the conversations that have started developing and I’m always pleased with how much I can learn just by listening to you all chatter. 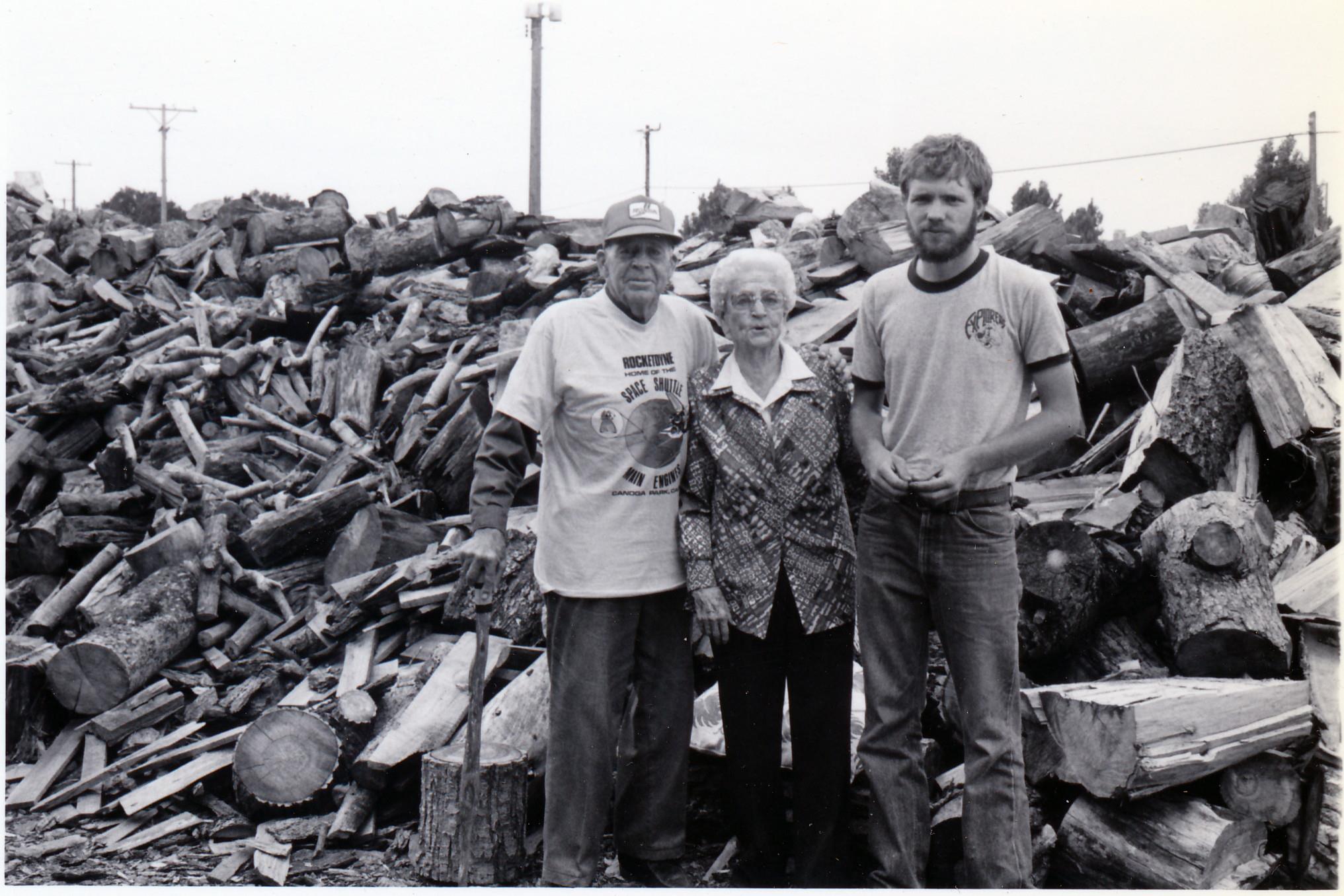 Art Collamer, Ruth Dermody, and Jim Burrill on June 1981. (Photo thanks to Jim Burrill, one of my best sources for old photos.)

One of my hopes that I expressed six months ago was that I’d have people submit their old photos for me to share in the stories I write. Unfortunately, that hasn’t turned into the photo sharing fest that I had hoped for. But recently people have started, here and there, sending me a photo or two, and I’m hoping that continues.

If you suddenly get inspired to scan an old picture, or send me a story, or pass along any other information, you can write to meg@northerncoloradohistory.com. And for those of you who have already shared some stories (especially about developers in town), I do hope to write about them all soon. Sometimes it takes me awhile to wrap my head around all of the participants in a historic event. And sometimes I just know that the story will be much better if I spend some time digging through old newspapers and looking through files at the Archive before I write anything, which means those stories sometimes get shoved off till the future. But we’ve got time. I’m hopeful that those stories will happen… eventually. 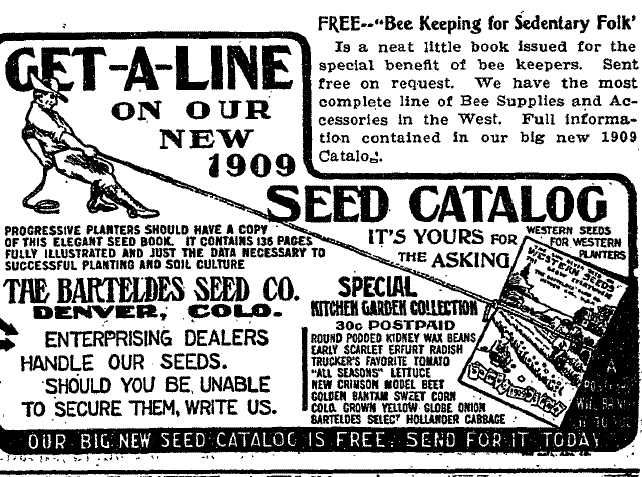 Some of the articles I have in mind for the upcoming year include: 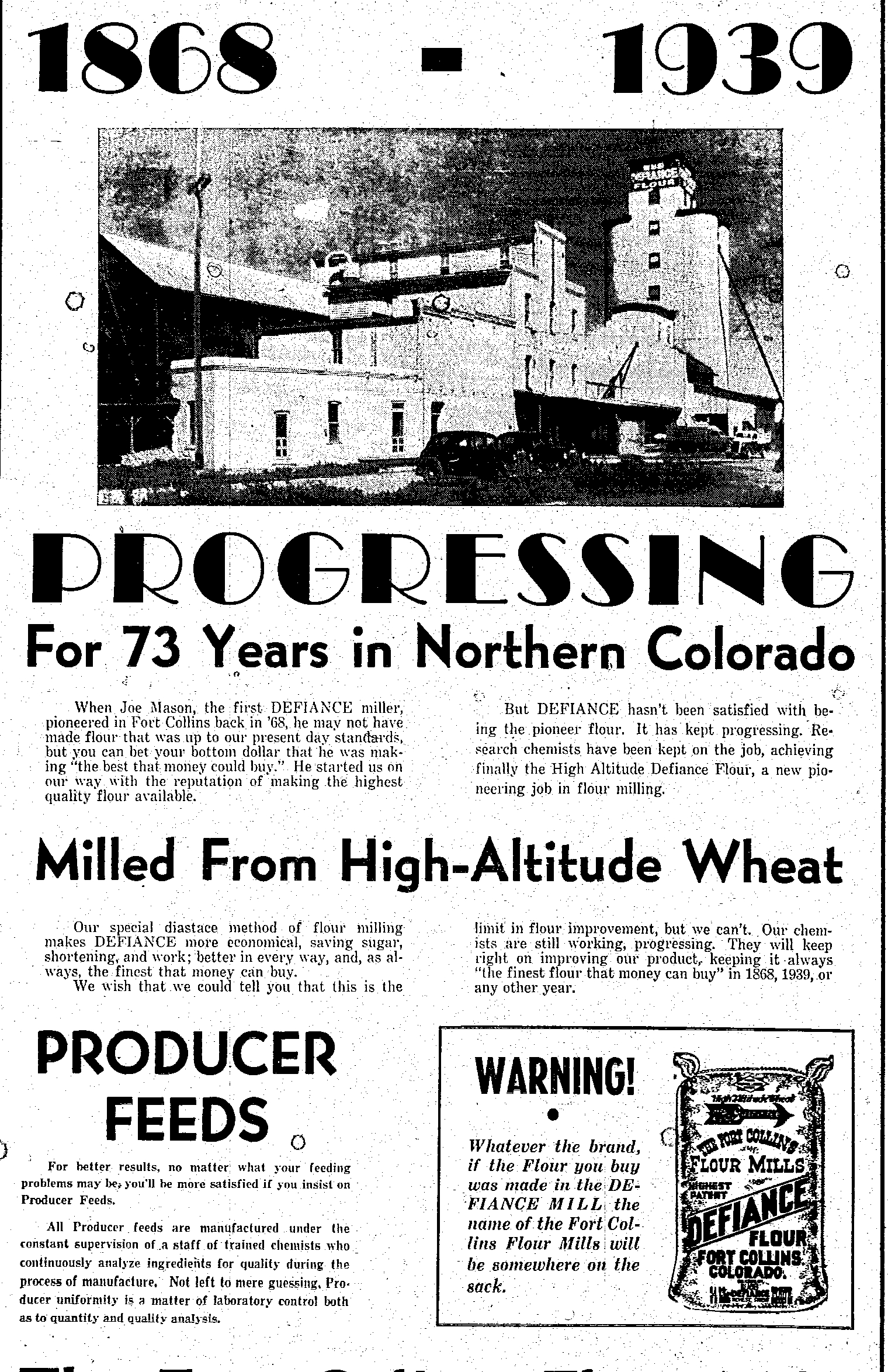 This flour mill ad is from the April 30, 1939 paper. (Unfortunately I failed to write down which paper. Probably the Courier at that point.)

Fort Collins is growing rapidly and what we were is steadily giving way to what we are becoming.

But there is a unique sense of place here in Fort Collins that could easily be washed away by rampant development and by a steady influx of new folks who don’t know, and don’t take the time to learn, the history of this place. But it doesn’t have to be that way. There have been some great developments that have not only preserved a sense of our heritage, but actually restored parts of it to their original splendor. (The WPA Art Deco fountain in front of the Powerhouse Energy Campus at 430 N. College jumps immediately to mind.)

We like living in a place that is unique and distinct. People want to know that where they are is somehow special. No one wants to become an automaton in a world where all our houses look the same, all of our jobs are just as dreary, and our experiences here could happen just as easily in Arkansas, Pennsylvania, or Southern Cal.

And some times, what goes around comes around. Agriculture was an important part of the founding of Fort Collins. And with today’s Farm to Table movement, and an appreciation for not only locally produced food and drinks, but also other items that are hand crafted, there’s been a re-evaluation of the role of farming and craftsmanship in Northern Colorado. Which only serves to reaffirm our identity, based squarely within the history upon which we were founded.

But the sense of place that many have worked hard to preserve is also at risk of becoming its own worst enemy as it draws more and more people and businesses to our city. Gentrification in some parts of town is not only damaging pieces of our cultural heritage, but it’s also displacing people who have lived in Fort Collins their whole lives. This in turn pushes people out to Wellington, Windsor, Timnath, and Loveland, in turn changing those communities. 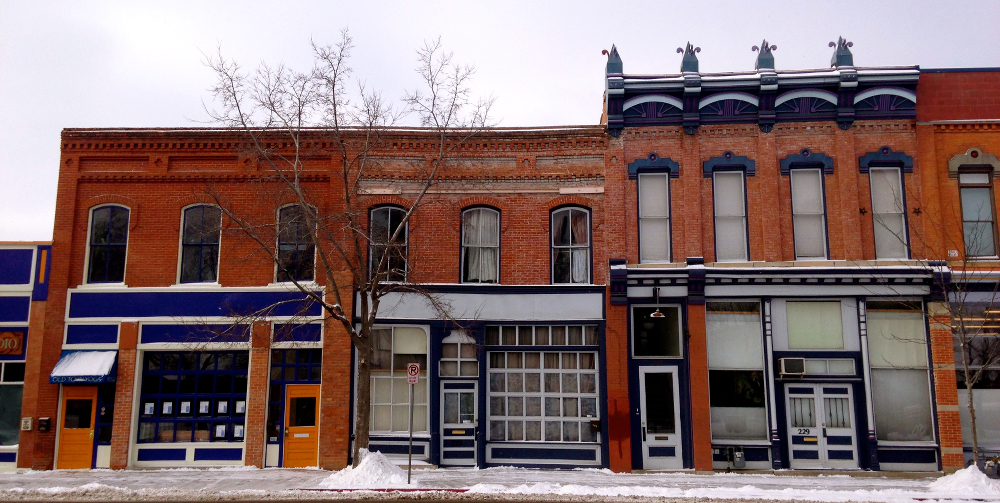 I have nothing against new development. In fact, given our current lack of affordable housing, we need new development in order to safely house our most at risk population as well as all of the newcomers to our doors. But I’d like to see more creativity in how that development is done. Not only do I think that repurposing old buildings for new uses is a smart and sustainable way to grow as a city, but I also think it helps us to keep our sense of who we are, while still growing and changing to meet new needs. And I’d also like to see brand new development with increased character. Many of the new structures I see going up around town look like something that could just as easily be found in almost any other part of America. A lot of it is cheap and unimaginative. I challenge the architects of Fort Collins to create a distinctive style that helps our town stand out as the gem she is, rather than filling her with the same styles and patterns that can be found in new development throughout the United States. Montezuma Fuller used familiar styles, but he put them together in a way unique to Fort Collins. Let’s follow in his footsteps, building structures that will last, and that will tell our children and our children’s children the story of Fort Collins today. 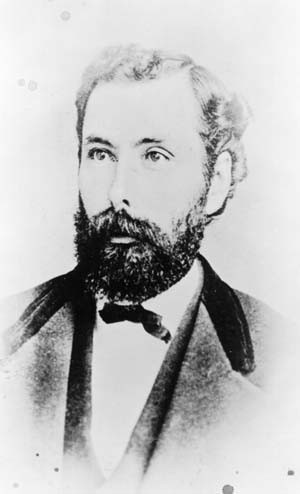 In Austin, Texas the local shop owners started a saying, “Keep Austin weird.” (And compared to the rest of Texas, Austin is very weird indeed.) But in Fort Collins, our history is one of great boldness. Joseph Mason managed to get the county seat and a college located here before the U. S. government had even ceded the land for a town. Fort Collins was one of the first to get telephone service, one of the first to have its own power plant, and one of first to have a kindergarten and then a high school. The pioneers were not afraid to strike out boldly, to do their own thing, and to do it with aplomb. I believe that same spirit drives many residents today as we become the Napa of beer making, lead the way in energy innovations, and host a new breed of home-grown community-embedded, local news sites known together as the Scoop Blog network (of which Forgotten Fort Collins is a part).

I take very seriously my roll in helping to teach and preserve this city’s history. I enjoy learning each new thing, and I’m pleased when a story that has struck a cord with me, resonates with readers as well. I believe that an important piece of growing and developing as a city is for the community to know and understand where the city has come from in order that we might build upon that foundation. So please tell your friends and neighbors about this site. Reshare those stories that strike a chord with you. Let’s together share the stories that provide a foundation for our shared life in this community. And let’s keep Fort Collins bold.