At one time, First National Bank was located on the southeast corner of College and Mountain in an impressive granite and terra cotta building with grand columns standing sentry on either side of the stairs that lead up to the front entrance. But in the early sixties, First National moved to a new location on W. Oak and the older building was razed to make way for a more modern structure built for Columbia Savings and Loan.

Once the new First National Bank building was finished, the contents of the bank had to be moved, including the safety deposit boxes. Today’s article is all about that move. It was written by guest blogger, Linda Devers Iannuzzi, who was a teenager at the time. 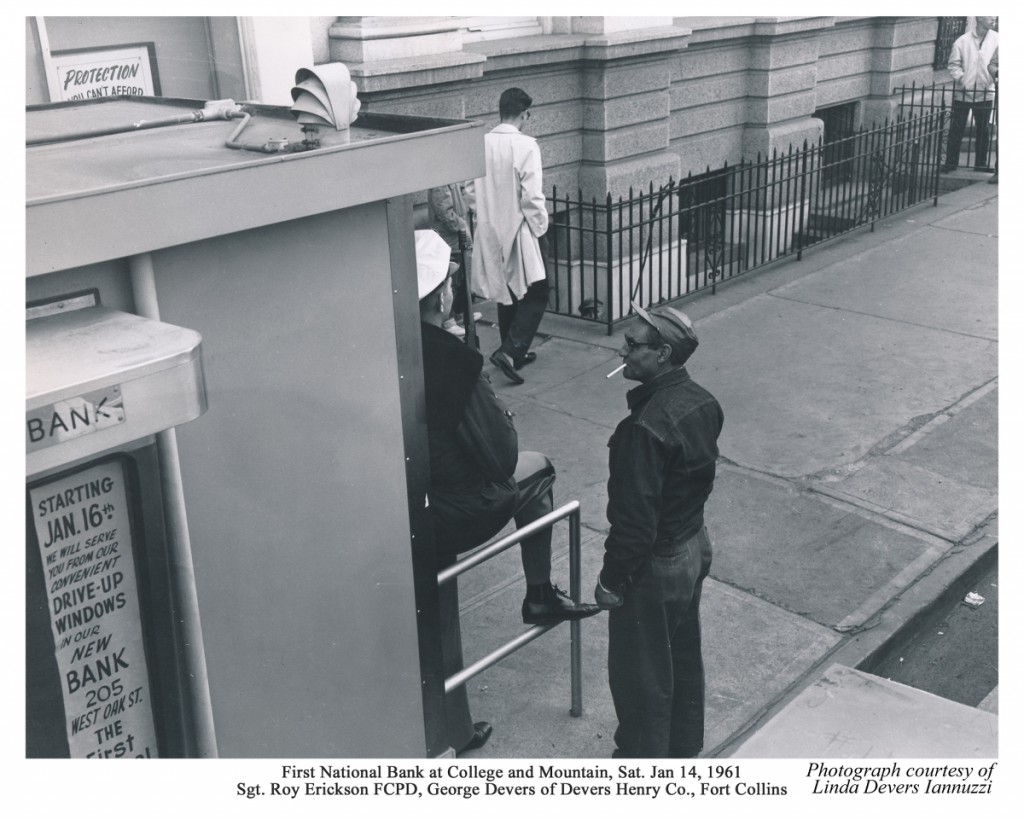 The First National Bank building had been sold to Columbia Savings and Loan Association of Denver and they announced their plans to erect a new building. My parents and many others in the community were dismayed that the beautiful granite building would be demolished. 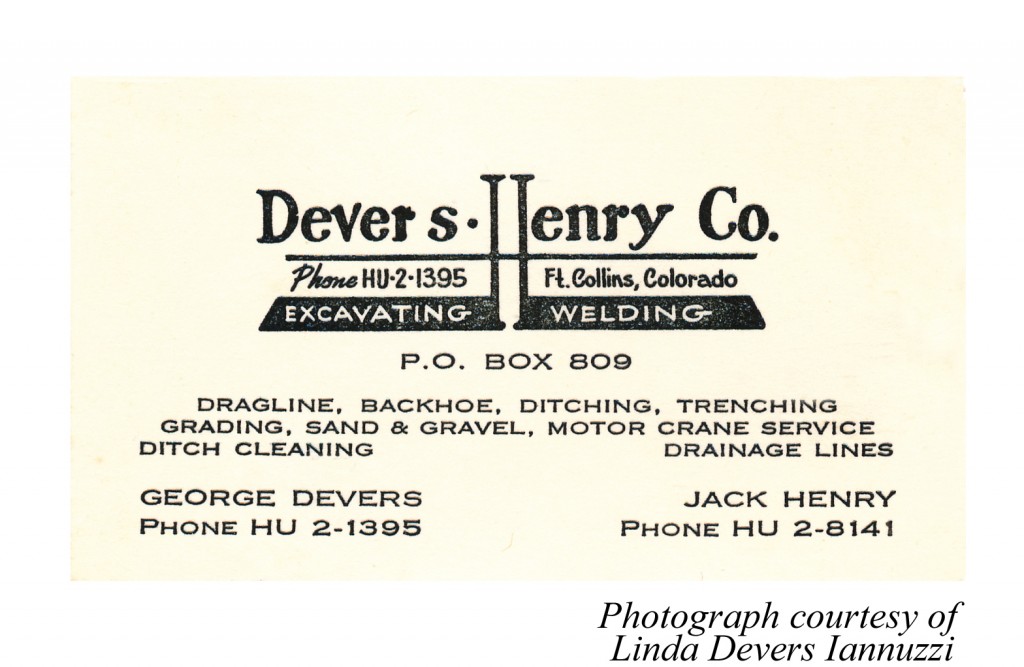 First National Bank hired the Devers Henry Company to provide crane and heavy duty truck services to move the vault and cases of safety deposit boxes to the new location. My father, George Walter Devers, and John (Jack) Henry owned the crane and excavation company. The contract and arrangements for the Saturday move were made behind closed doors and no public announcements were made. The Fort Collins Police Department Captain arranged for off-duty officers to provide security with shotguns and submachine guns at both locations.

Friday night Dad disclosed the bank move to my sister Susan, age 16, and me, age 13, and asked us to join him at the job site. He stressed the security and danger and instructed us to stay outside the boom span and next to officers. Susan and I are in photograph number four between FCPD officers and the Devers Henry heavy duty truck. [See third photo down below – the wide angle shot.] 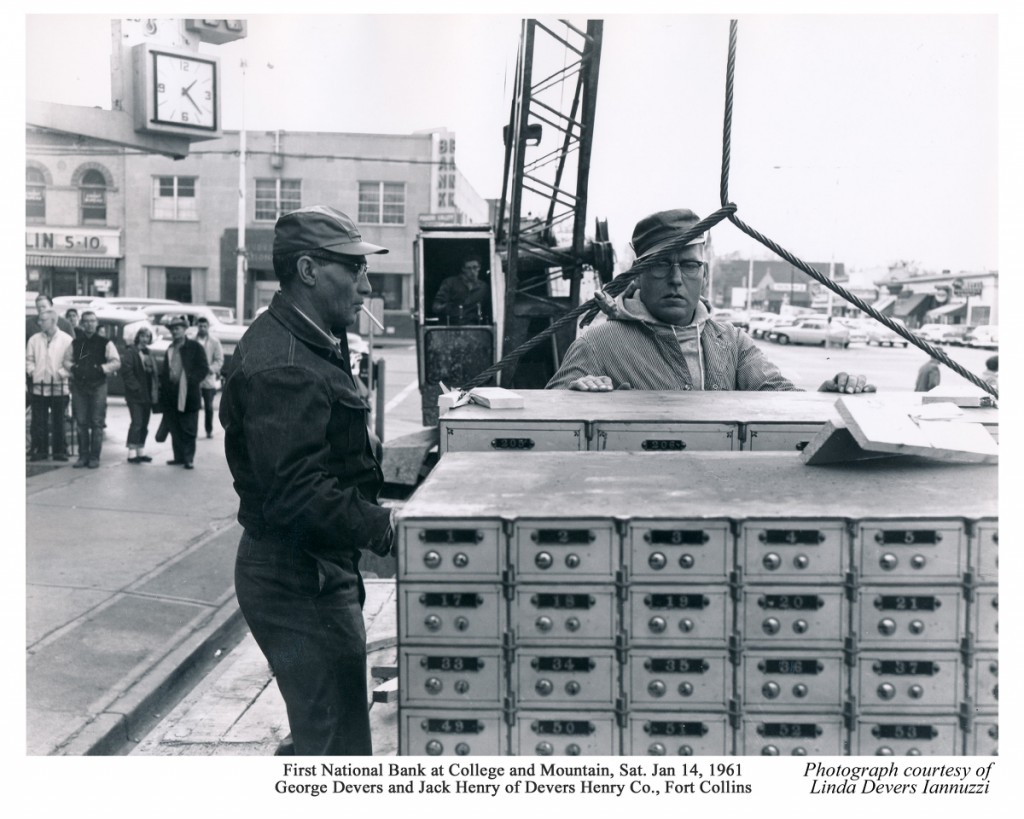 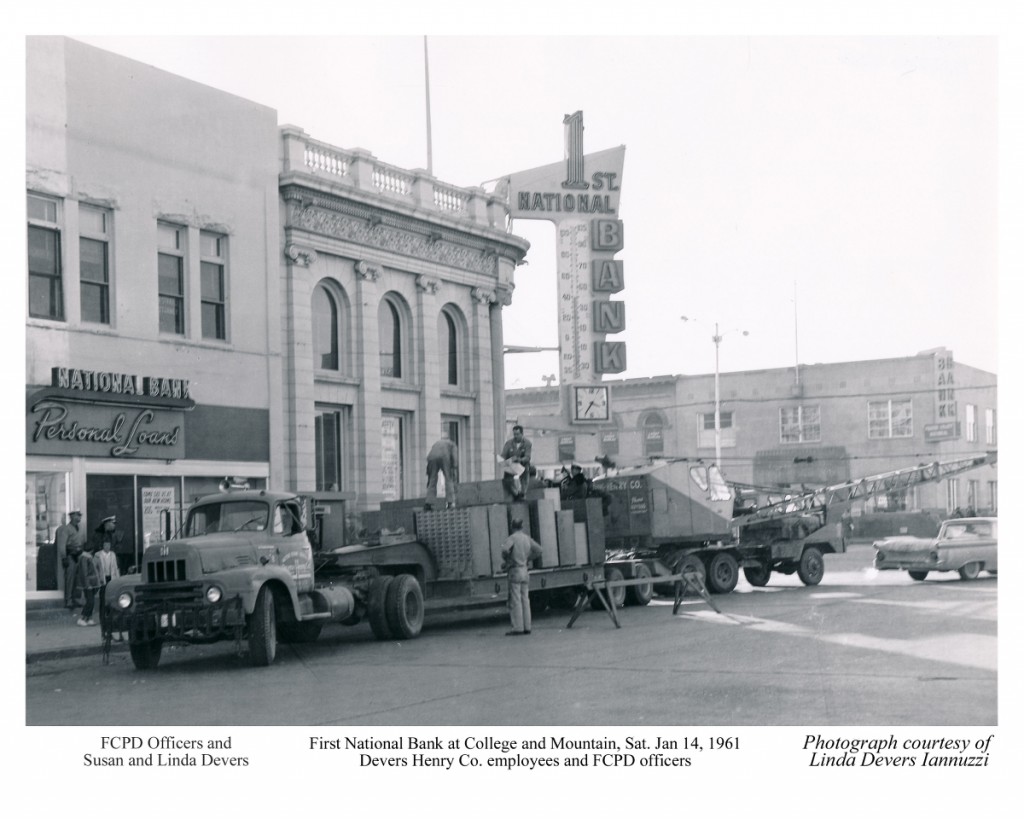 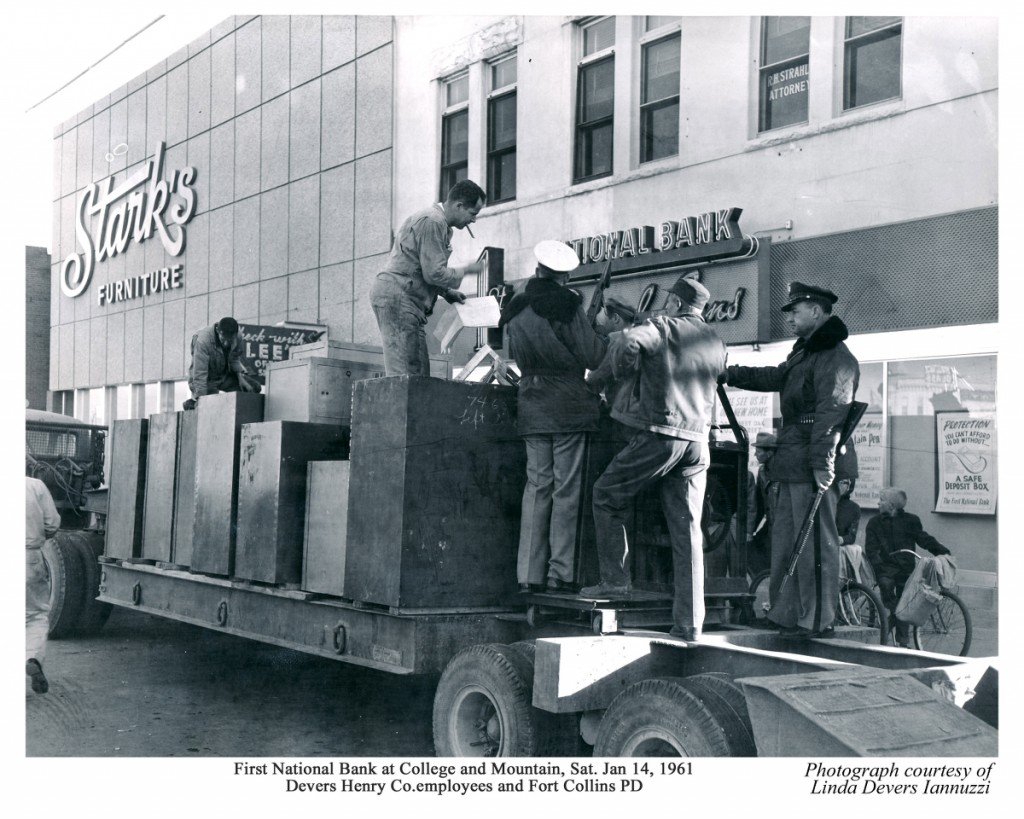 Dad and Jack began moving the crane, heavy duty truck and lowboy to the corner of College and Mountain Saturday morning. When the bank closed at noon the heavy equipment and police officers moved into position and a crowd of bystanders formed. I remember the huge safe being lifted up and out through a hole in the roof but the Fort Collins Coloradoan front page article, Sunday Jan 15, 1961, does not mention roof access. The sixteen cases of safe deposit boxes were kept in the basement and a crew of D&H men slid them to the doorway one by one where they were braced, strapped and tied to the crane cable. The crane lifted the cases over the wrought iron railing and Dad and Jack manually guided each load to the lowboy. By 4 o’clock the safe deposit boxes were secured and began the short two block journey to West Oak and Mason.

The crane was moved and repositioned at the new building and the hard physical labor began. Steel plates were laid out to prevent damage to the new floor and the two ton safe was unloaded and rolled or slid slowly toward the vault. There weren’t enough steel plates so Dad, Jack and the crew continuously lifted and carried steel plates to the front of the safe. When the safe was secured the same process was repeated for each of the sixteen cases of safety deposit boxes. It was after 10 pm when the last cases were secured and the heavy equipment could be returned to the Devers Henry construction yard.

Per the Fort Collins Coloradoan article, dated Sunday January 15, 1961 and obtained from the FC Museum of Discovery microfiche collection, approximately $750,000 in cash and securities were in the safe during the move.

The above photographs were inherited from George Walter Devers. Digital images have been donated to the Fort Collins Museum of Discovery, Local History Archive in care of Lesley Struc, Curator.

My interest in history and genealogy began while pulling weeds and pruning roses when I was eight. Great grandfather, Robert Garibaldi Maxwell, died in 1955 and great grandmother Minnie was lonely and needed help with her 2340 West Mulberry Street home. Most summer weekends for two years I mowed the lawn and tended her prized rose bushes while she talked about ancestors and Fort Collins in the early 1900s. 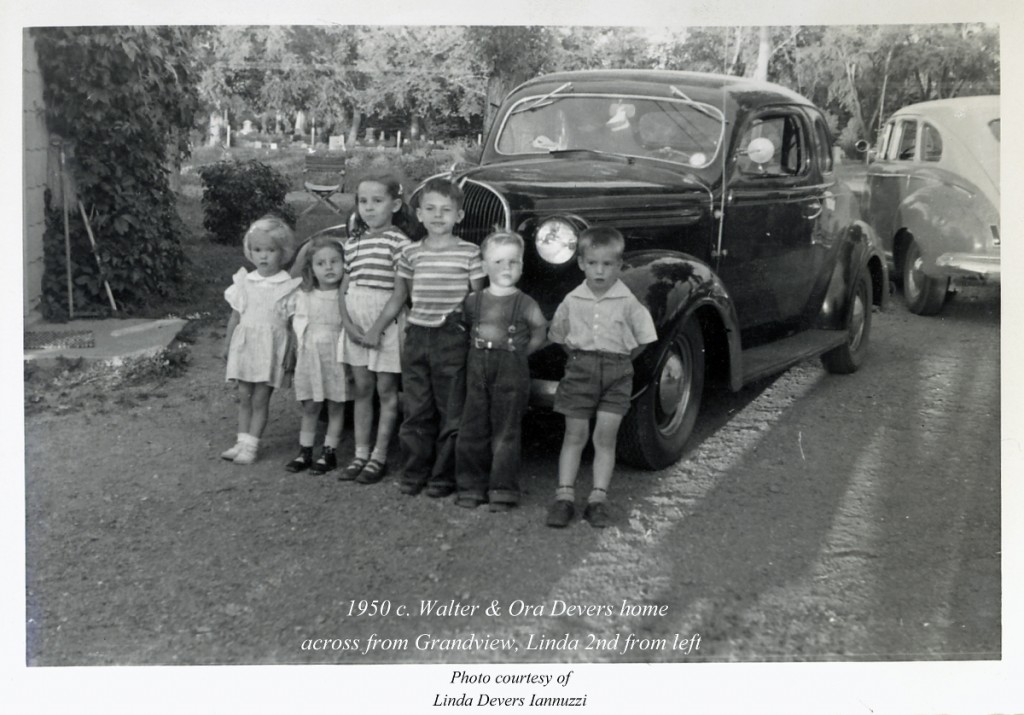 My mother, Erma Devers, was a 4-H leader, passionately interested in genealogy and wrote several articles for Larimer County history books. My father, George Devers, was an avid archer and sharpshooter and I followed in his footsteps with the Fort Collins High School Rifle Club and Red Feather Bowmen.

My college education includes a B.S. in Business Administration, and I retired as Director of Accounting for a California aerospace corporation. My New Jersey born husband, Frank, and I met in California and enjoyed 15 years of ocean boating up and down the west coast and Catalina Island. We are excited to have retired in beautiful Colorado close our families. Retirement has given me the opportunity to research seven Colorado direct ancestor families before 1900 and restore photos.

Charles Devers and Caroline Wolfer, my grandfather’s parents, came to North Park in 1884 and homesteaded near Delaney Buttes. They moved to Fort Collins in 1891 for the winters but continued ranching in North Park until 1916. In 1904 Charles and his partners filed as incorporators for the Wolfer Ditch Company to convey water from the Roaring Fork River to North Park.

Samuel Hall Haworth, my grandmother’s father, moved to Stout, CO in 1869 and worked at a local blacksmith shop. In 1879 he moved to Walden and was one of the first mail carriers to the North Park area. His early horseback and snowshoe mail trips were from Fort Steel, WY to Teller City, CO. A few years later he was a stage driver for mail and passengers. Sam was a Walden Justice of the Peace in 1899-1901.

Judson Rathbun and Rosetta Dey Rathbun, my grandmother’s grandparents, were early settlers of Walden, built the second town cabin, and are in the first picture of Walden taken abt. 1887. Judson got a receiver’s receipt in Apr 1889 and the original sixteen town blocks were laid out. Several areas in Walden are Rathbun and Moore additions.

In 1911 R.G. donated a site for Empire Grange Hall #148 at 2306 West Mulberry Street and assisted in construction. In Dec 1923 Colorado Agricultural College declared a student holiday and students climbed the foothills, cleared an area and constructed an “A” for the Aggies. But the “A” could not be completed until a legal agreement was made between CAC, the State Board of Agriculture and R.G. He gave the university a 99 year lease for one dollar (as a token) to use the land.

Philemon Pierson Hann and Alta Pickard Hann, my great grandmother’s parents, moved to Fort Collins in Dec 1896. He suffered from consumption and hoped the climate would improve his health. He was a farmer, respected member of the community and died after three years residency.

William Campbell Eugene Hawley, my grandmother Emerald Hawley Maxwell’s father, moved to Fort Collins in Aug 1884 and opened Hawley’s Carriage Factory at Jefferson and Pine in 1890. He was known for elaborate hand painted designs, quality carriages, “The Hawley Cart” and also did custom oil painting, water colors and photograph enlargements. He was sales agent for the O.I.C. Coming Hog that was exempt from cholera. W.C.E. was active in Grange #148, donated bricks for the 2306 West Mulberry Street Grange and assisted in construction with R. G. Maxwell.

Charles H. Marsh, my grandmother’s grandfather, was admitted to the Territory of Colorado Bar in Sept 1871. His Fort Collins law practice represented many areas including probates, real estate transactions, conveyancing, collections, and coroner inquests. He was Fort Collins Coroner in 1884, Police Magistrate and Justice of the Peace in 1885 and Judge in 1886.