From the earliest of times, residents of Fort Collins have been movers and shakers. Never content to let the size of the city dictate what we can and can’t do, we were the first city west of the Mississippi to have a Kindergarten class. We voted for Prohibition before it was “cool” and we stuck with it even when the rest of the nation gave up. We had the first Waterpik. We rocked the first Tour de Fat. And we have one of the first churches in the nation to receive a “Bike Friendly” designation. So it was par for the course, back in 1949, when Fort Collins started it’s own city symphony, despite being a small town of less than 20,000 people.

The Fort Collins Civic Symphony in the early days. (This photo from the FCMoD Archive is from the early 1950s.)

We were, in fact, one of the “smallest cities in the United States with an established, nationally recognized symphony.” And it all began, as it seems many things do in Fort Collins, with a collaboration between a few different groups in town, in this case Colorado Agricultural School students, staff, and citizens. Will Schwartz, a new professor to the college, began the symphony with its first practice on October 5, 1949. (Almost exactly 65 years ago.) 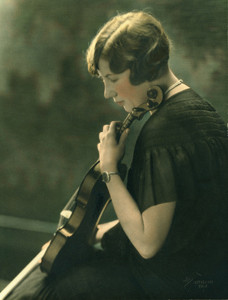 There had been an orchestra in town before this, however. In 1923, Editha Todd Leonard founded the Fort Collins Concert Orchestra and ran it successfully until the late 30s. Editha was also concertmistress in the new symphony started by Maestro Schwartz and ran a music studio in town. On her passing in 1999, she left behind several art endowments. 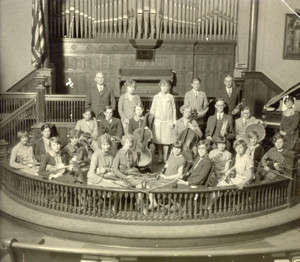 Like the Concert Orchestra before it, the Fort Collins Civic Symphony, as it was first called, had no official home. Concerts were often held either in the Fort Collins High School (which now houses the University Center for the Arts) or in Lincoln Junior High (where the Lincoln Center stands today). The musicians were all volunteers and a fundraising guild was established in 1963 to help cover expenses. 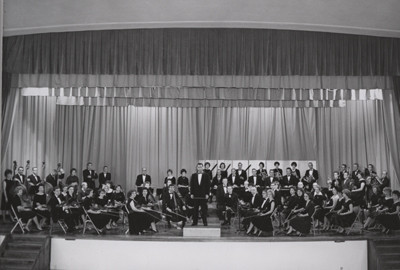 The Fort Collins Symphony in the 1950s at Lincoln Junior High. (Photo from the FCMoD Archive.)

Maestro Schwartz stepped down as conductor of the symphony in 1999, after fifty years in the position. (That’s quite an accomplishment!) Fusao Kajima took his place for two seasons, and then in 2003, Wes Kenney was hired through a collaboration between the Fort Collins Symphony Association and CSU’s Department of Music, Theatre and Dance. 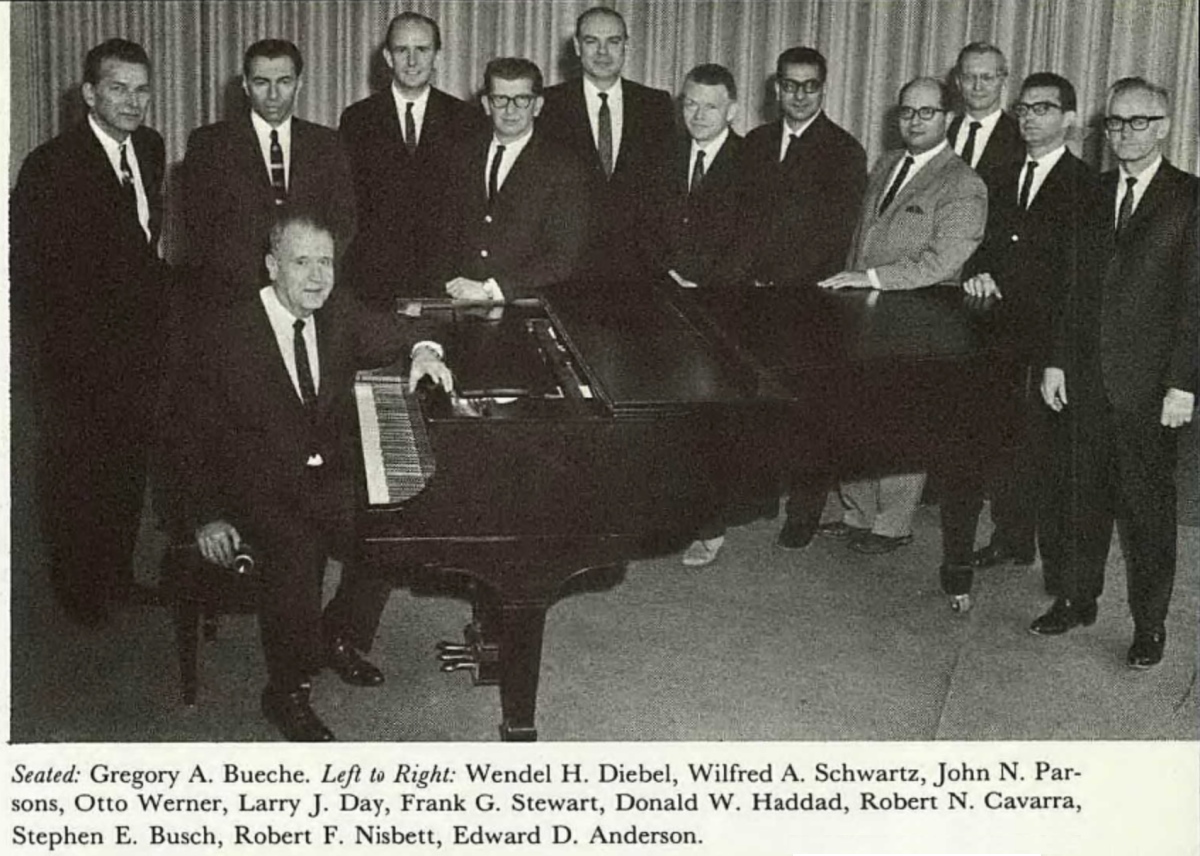 Will Schwartz is second from the left in this Silver Spruce yearbook photo. (Photo thanks to Ancestry.com)

Forgotten Fort Collins reader, Kacy Thompson, grew up in the Sheely neighborhood. Down the street from her lived Carl Levine, an English professor at CSU. Carl also played cello in the orchestra. One day when Kacy’s Brownie troop was going to the symphony, she told Carl they would be there. He said, “Wave to me and I’ll wave back.” So the Brownie troop filed in and sat down. Kacy looked through the orchestra until she saw Carl and she waved. He waved back, but not with a hand. Instead, he lifted up his whole cello and waved it at her. What a wonderful example of how the orchestra was an integral, and sometimes even a whimsical, part of the greater Fort Collins community. 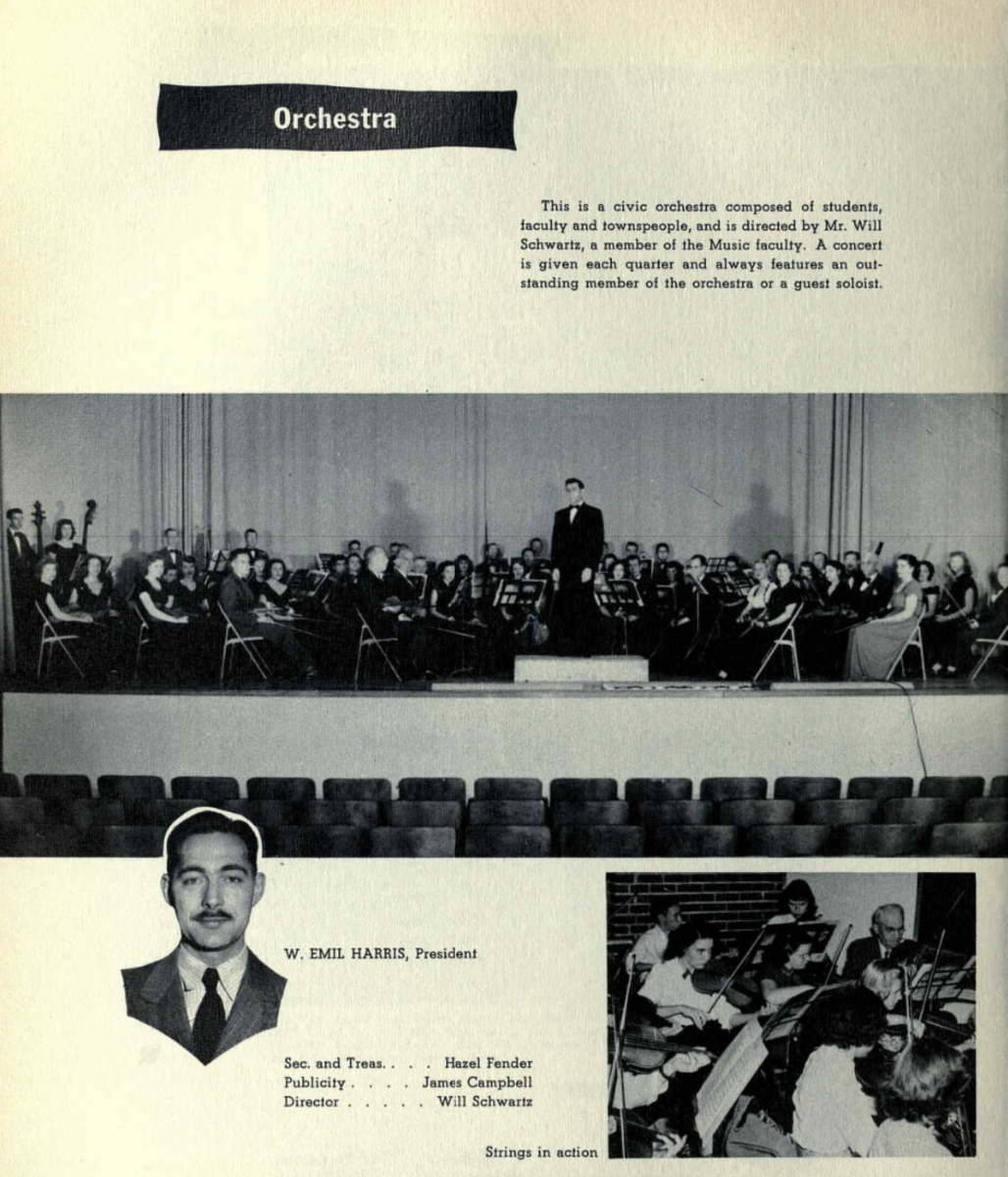 Because of the orchestra was a shared project between the Ag school and the city, it was included in the college yearbook. (This photo is from 1950 and came from Ancestry.com.)

The symphony has grown and flourished and continues to be an important part of the culture of Fort Collins. It also retains its whimsy with events such as Bach & Beer (October 23) and my favorite, the Beat Beethoven 5K (March 29), in which the goal is to run 5 kilometers before the orchestra can finish playing Beethoven’s 5th Symphony.

If you’d like to find out more about the Fort Collins Symphony, check out their website or visit an upcoming show.

The quote in the second paragraph is from a description attached to a symphony photo in the Fort Collins Museum of Discovery Archive online.

I found pictures through both the Fort Collins Museum of Discovery Archive online and Ancestry.com. And I collected bits and pieces of history info from the symphony orchestra website, the subtitles on the photos I found, and from Forgotten Fort Collins reader, Kacy Thompson.