Fort Collins by Design – A Street, A District, and a Public Place

As I mentioned a couple of weeks back, I’m taking an online Urban Design class through Coursera. One of our assignments was to write about a street, a district, and a public space in our own city that has character. We had to describe the area, explain how it came to be (was it planned by the city or did it grow more organically over time?), and explain how people felt about the place. 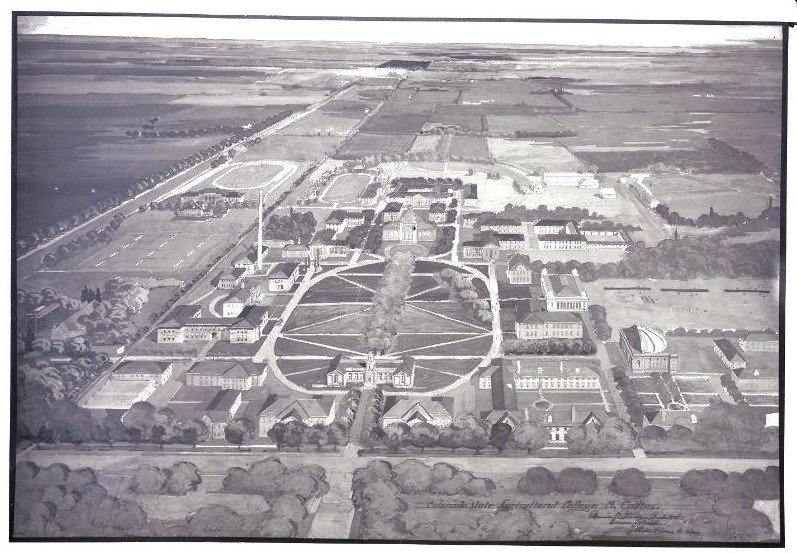 This is an architect’s rendering of what the Colorado Agricultural College might one day look like. The image is from the CSU digital Archive, but a note on the photo says that it was originally from the 1922 Silver Spruce (college yearbook). Some of the buildings in the image existed at the time this was drawn. Other’s were from the imagination of the architect.

I had to choose a street for the project and I decided to write about Oval Drive. I considered talking about College, but N. College is so very different than the downtown area, which is again different from the campus section, all of which varies wildly from either mid-town or south of Harmony. It just seemed like too much to cover.

I suspect that most of us don’t think of The Oval as a street. We think of the trees and Shady Lane and the trees and the grass and the trees and the old buildings that surround it …and the trees. (What is it that we find so captivating in those trees? That they stand in a line at attention? That they reach their branches over the walkway, making us feel as though we’re walking down a Greek colonnade? That their perfect rows point directly to the stately Administration Building at the end of the lane? The way their leaves change in fall? Or how the snow clings to their branches in winter? When I see a local person posting their photos of the Oval online, the trees always feature prominently.) 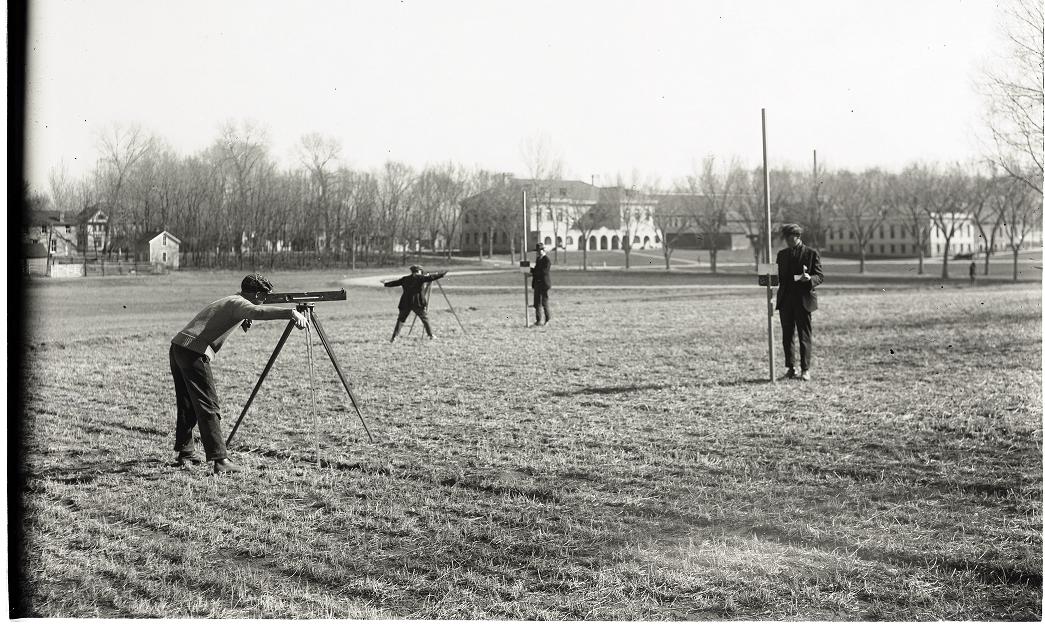 This photo from the Colorado School of Agriculture Prospectus for 1918-1919 shows students practicing surveying. Oval Drive and the Guggenheim building can be seen behind them. Just last month I was walking through the oval to get some photos for a “Then and Now” post and I had to navigate through several groups of students who were doing exactly what these students in the photo were doing – practicing their surveying skills. (This photo was also through the CSU online Archive.)

Oval Drive is only 2,065 feet long. It is an iconic and well beloved road in the city of Fort Collins. Though it doesn’t really take you anywhere, it still lives large in the hearts and minds of CSU students and city residents. The street was built by students in 1909 as a means of testing local pavement materials for automobile use. Oval Drive creates a green haven on campus for leisure activities, class projects, and outdoor meetings as well as an area used by city residents for wedding and school dance photos, large events such as dog shows and beer tastings, and as a general gathering place.

Of the three areas that I studied for my Urban Design class, the Oval and Oval Drive have remained the most consistent in use and character. Though buildings have come and gone, the overall look and feel of the place has remained largely the same for over 100 years. 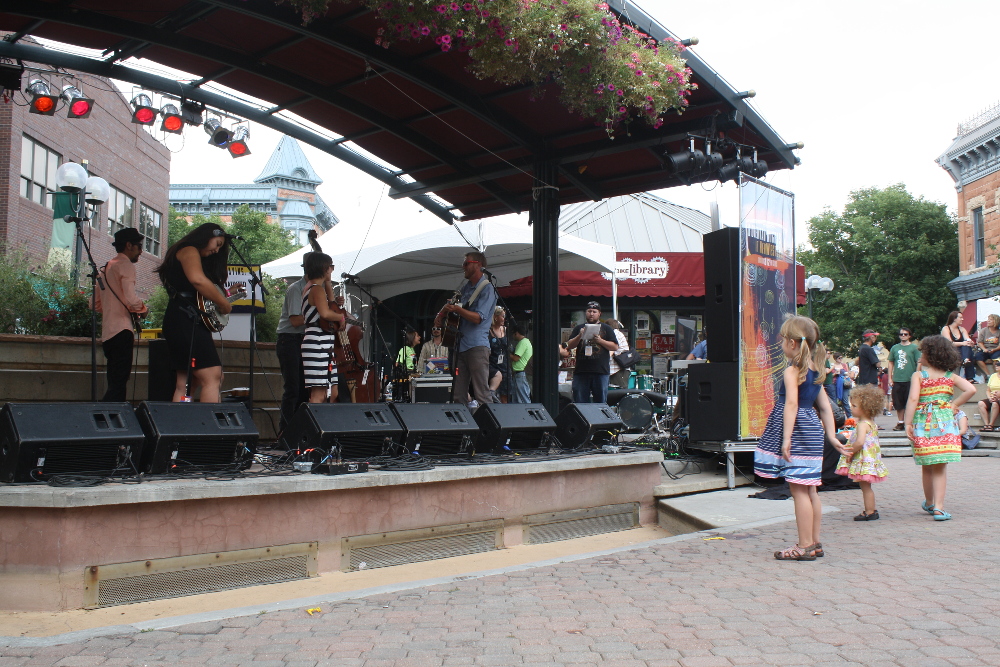 At one time, Linden was essentially Fort Collins’ “Main Street.” Now it is a pedestrian plaza that hosts events of all sorts. This photo is from Bohemian Nights at NewWestFest in August 2012.

In the 1980s, a forward thinking group of business owners developed a plan to shut down a one block length of street and turn it into a public square. By creating a Downtown Development Authority that used tax increment financing, they were able to add a stage, play area, benches, artwork, planters, and several other pedestrian friendly amenities.

Thanks in large part to this new public square, as well as creating a historic district that provided additional financial help to renovate buildings within the block, Fort Collins’ downtown area is now an economically and socially vibrant area. The photo above shows a band playing on the stage and young children getting ready to dance to the music. 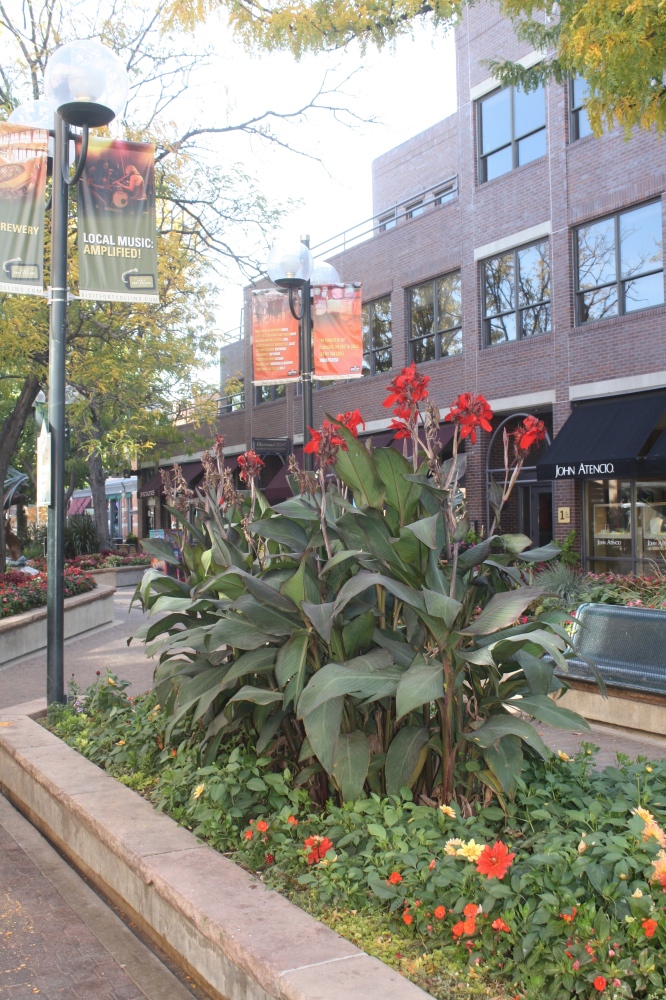 Planters and benches help to make Old Town Square an appealing place to hang out.

The square is so well used by the public that the development authority is planning a major renovation next year. The redeveloped square will feature a more flexible space that will continue to allow for performances while also enabling open market events to take place, a water feature for children to safely play in, and tables set up in a café style atmosphere to provide a convenient and inviting place for social interaction. 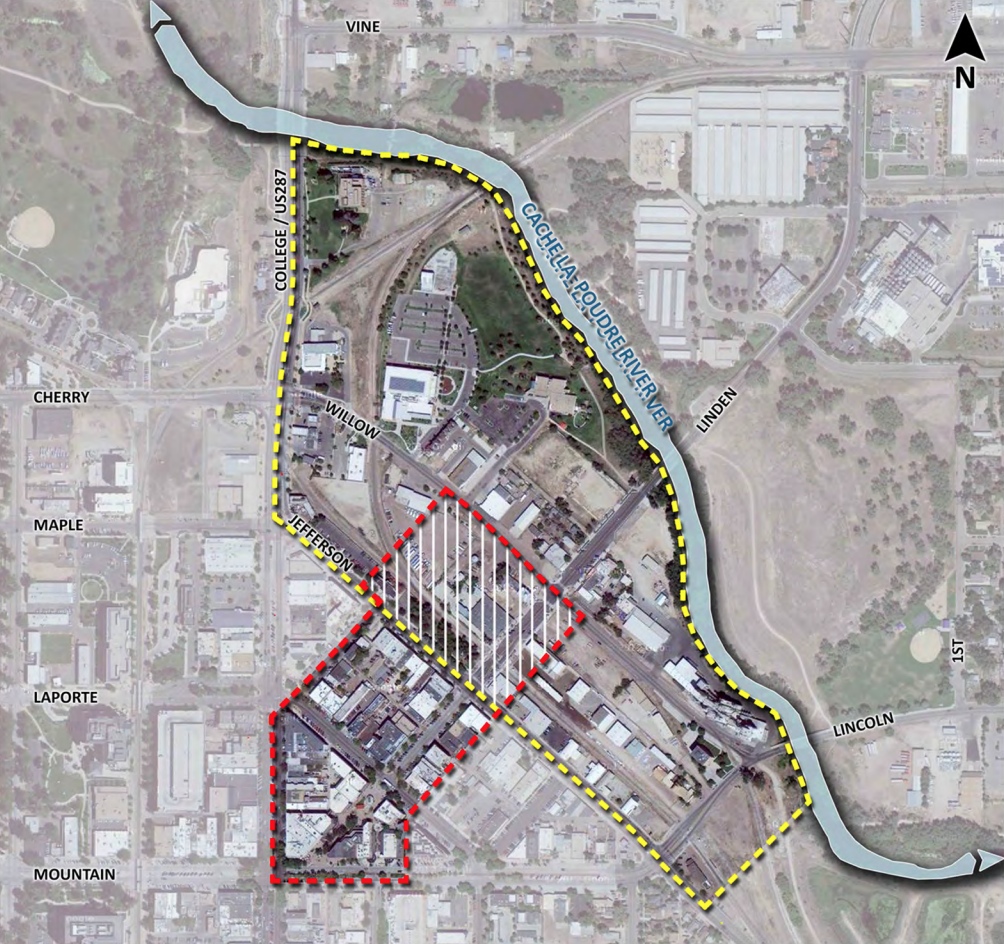 The River District (bounded by dashed yellow lines) is where the city of Fort Collins began. In 1864, a military camp, Camp Collins, was set up along the river in order to protect the mail route between the United States and California. (Colorado was a territory at the time.) The last of the buildings from the camp was torn down in the 1940s, and the area became largely industrial with some remaining housing and, for awhile, the northernmost section was the site of the town dump. 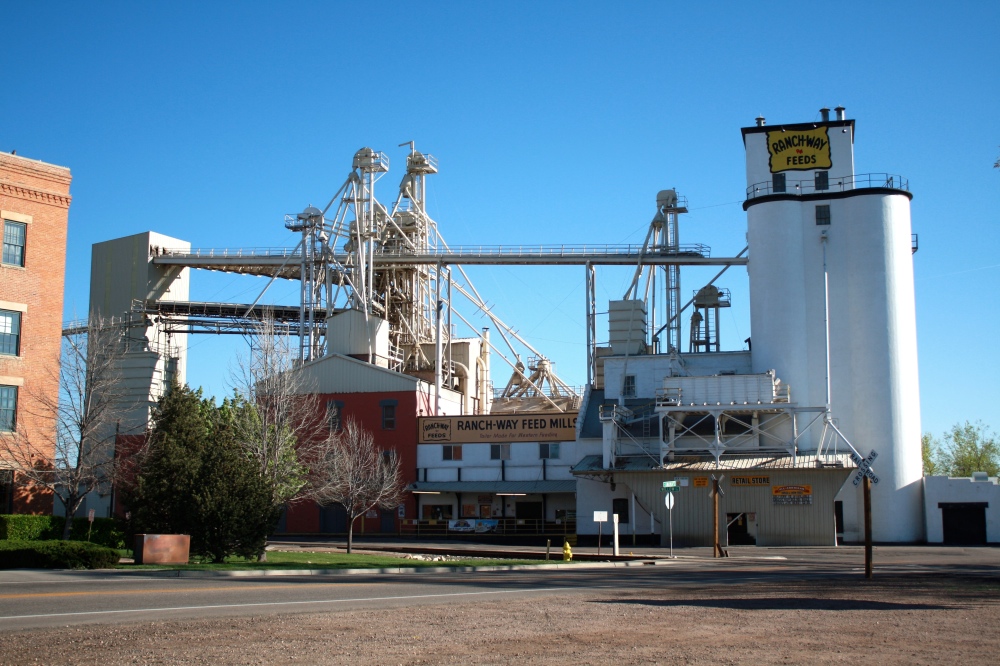 There were several feed and grain mills along the river in the early years of the city’s history. Ranchway feed continues to operate on Willow at Lincoln. The metal and brick buildings contribute to the industrial feel of the River District.

Growth and planning were both rather haphazard in this area for about 100 years. Construction materials tend to be metal and brick – industrial materials. Historic buildings often became run down and had multiple additions added of varying quality and style. As railroad spurs were decommissioned and the nearby downtown area faltered, businesses moved out. This has only recently begun to turn around. 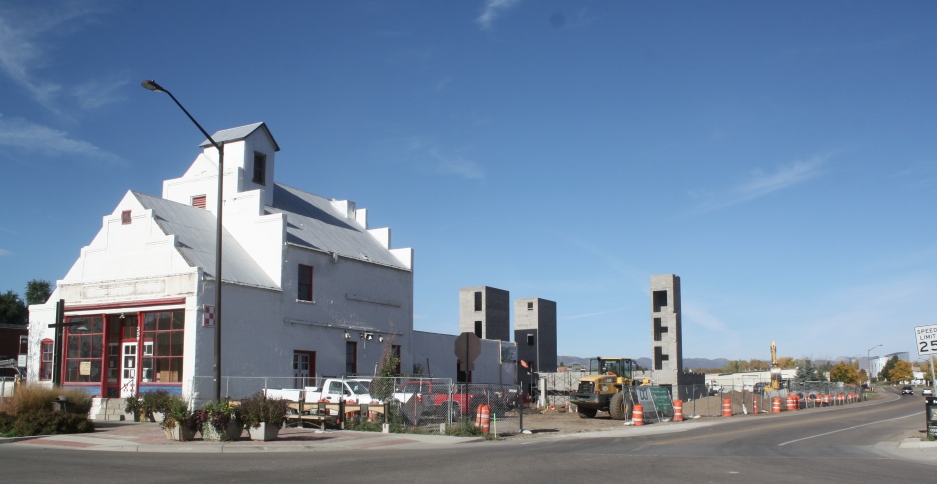 Northern Colorado Feeder Supply has moved out of the River District and is now located on Hickory. The old Feeder Supply building will soon house a restaurant. You can see the stairwells for a multi-unit residential building going up behind the historic building.

New design guidelines for this district were adopted this past spring and the area is starting to see quite a bit of development. In the above photo, the historic Northern Colorado Feeder Supply building will soon have a 54 unit multi-family residential building behind it. 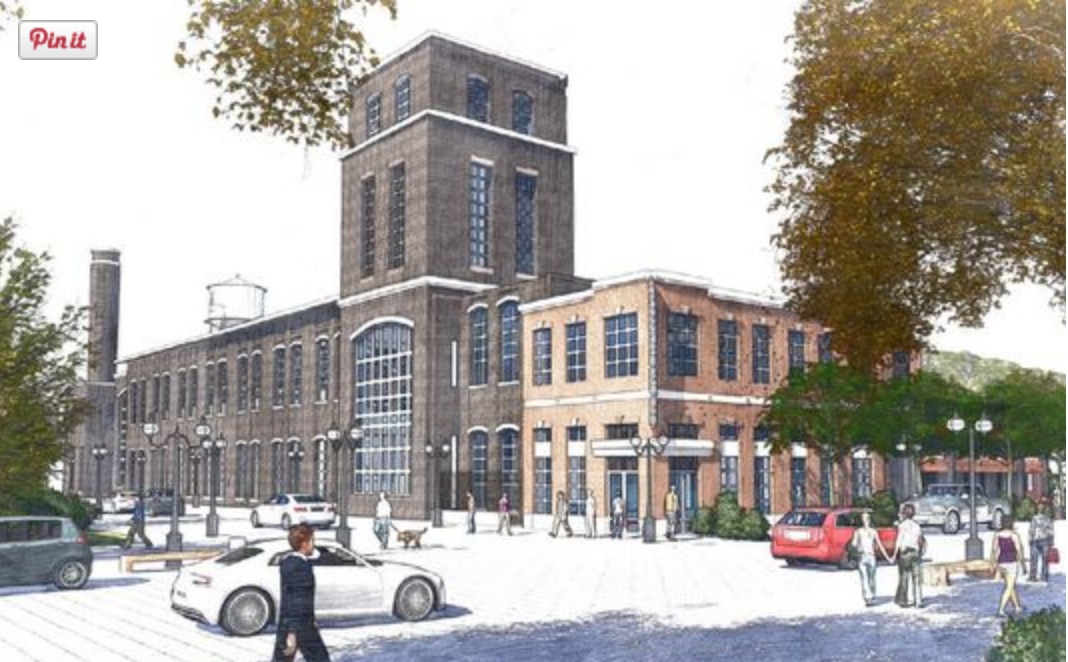 Blue Ocean is planning this new structure at the corner of Linden and Willow. (Old Town is to the right. The river is to the left.)

This planned distillery, retail, restaurant, and event space is an example of new construction that is following the guidelines and building a hip new spot that will continue to fit into the industrial motif of this district.

Feelings on the river district have been mixed with most people ignoring or avoiding the area. But with rampant growth, public opinion is likely going to change within the next year or two. Though the district may not be “great” yet, it is clear that it is well on its way.

I’m curious, if you had been given this same assignment, what would you have picked for a street, a public space, and a district with character in Fort Collins? Why? What do you like about it?

Both of the photos for the Oval Drive section came from the Colorado State University online Archive. And today I discovered that every photo comes with citations already written out in both MLA and APA formats. All you have to do is cut and past. So that’s what I’m gonna do. Here’s the MLA formats for the citations of each photo:

Both photographs in the Old Town Square section were my own.

The photos of Ranchway Feed and the Northern Colorado Feeder Supply building were both taken by me. The artist’s rendering of the new Blue Ocean project came from the Landmark Preservation Meeting agenda in which their project was presented (September 24, 2014). Remember, LPC meetings are always open to the public. Or if you can’t attend, you can watch regular meetings on television the 2nd Wednesday night of each month. And agendas are always online on the city website.