A common refrain that I hear among FoCo residents today is that the city is becoming too crowded. There are too many people living here, making it hard to find a house or apartment. There are too many cars on the street. Schools are at capacity. And so on. But in the 1800s, there was a very different view towards growth in the area.

In 1872, the Fort Collins Agricultural Colony was created to induce people to move westward. The Union Colony in Greeley had been a draw for families to move west, so the folks in Fort Collins decided that they’d form a colony as well to try to bring a few more non-natives to the area. The local newspapers included grand descriptions of the hospitable climate, the productive land, and the nearby mineral resources.

Fort Collins, the county seat of Larimer county, is situated on the south band of the Cache a la Poudre river, on a broad and beautiful table of bench land four miles out from the mountains in full view of the everlasting snow range, and with a boundless view of the plains to the east as far as vision can reach. It is twenty-five miles from Greeley to the east; forty-five miles to Cheyenne, the capital of Wyoming. It has now a population of some four hundred souls, with the prospect of a growth and development in the future not excelled by any place in Colorado. Its agricultural surroundings are the largest and the best in the Territory, and the prospects of its mineral resources becoming as good as any, is increasing every year. The location of the Agricultural College of Colorado at this place secures its literary advantages, and in the enterprise of its people it is behind none. It has two newspapers, a flouring mill, churches, schools, stores and shops and room for many more, some of which are in great demand. — Fort Collins Standard, March 11, 1874, p 4.

“This Colony offers at the present time, greater advantages and inducements to farmers and business men than any similar organization in the United States.” — Fort Collins Standard advertisement from 1784 (before truth in advertising laws).

There was a bit of wishful thinking as well. The newspaper boasted about railway lines in 1874 despite the fact that the first railway through Fort Collins wasn’t built until 1877. 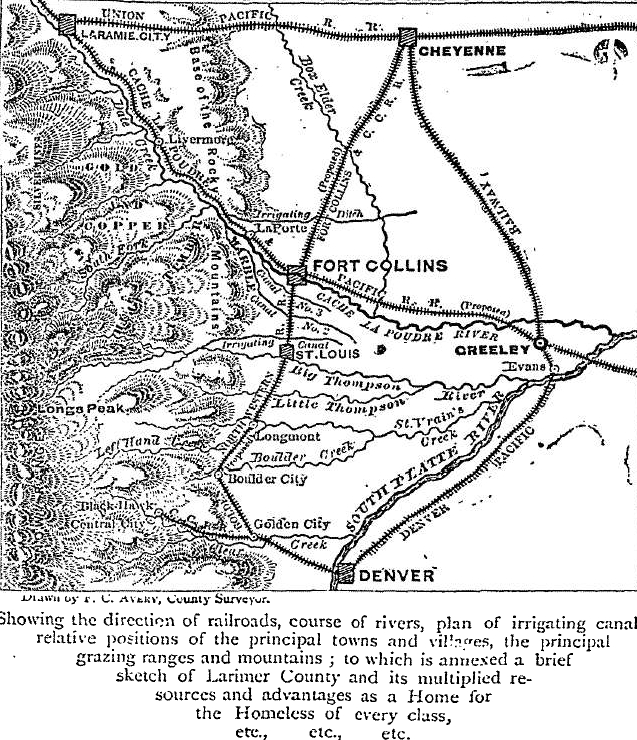 Note that Loveland didn’t exist on the map above. The train line was drawn to go through St. Louis. But when the train actually came through three years later, they found that the topography was better suited to go through an area a little to the west of St. Louis. So most of the people picked up their houses and hauled them towards the train line. And the newly moved town was dubbed Loveland after William A.H. Loveland, a railroad entrepreneur.

With the introduction of the railroad along Mason Street in 1877, Fort Collins finally had its first real growth spurt. Not only did the railroad provide an outlet for the agricultural products that were grown here, but it also presented a far faster means of getting to Fort Collins than a family could make by covered wagon. By 1880, there were 1,356 residents in town. 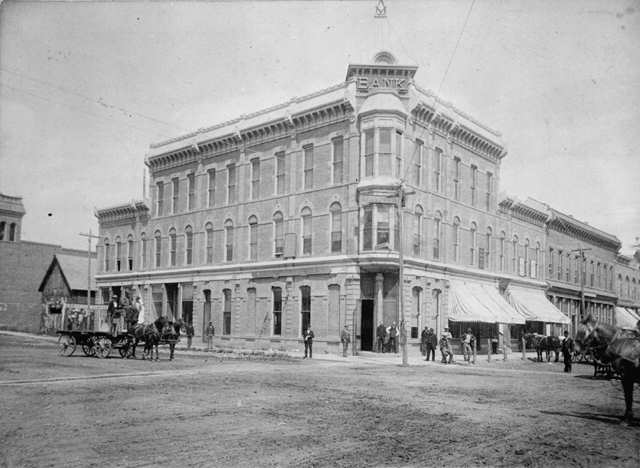 Poudre Valley Bank at the corner of Linden and Walnut in 1908.
(Photo available at the Fort Collins Archive – H01523,
although I found it through Wikimedia.)

Steady growth continued between 1880 and the end of the century. By 1890, there were 2,011 residents in Fort Collins. And despite a difficult recession, called the Panic of 1893, that slowed growth for a short time, by 1900 the town boasted 3,053 citizens.

Although it’s hard to get a sense of what the average resident thought of the growth of the community, articles in the newspapers made it seem as though growth was considered a good thing in general. After the recession, there was a hopeful optimism that things were going to turn around for the town: “The conditions are favorable in Fort Collins for a big growth in population next year. It need surprise no one familiar with the situation if the city nearly doubled its size before another holiday season.” (Fort Collins Courier, December 27, 1894)

By 1900, the river provided the town’s northern boundary. Washington Avenue was the furthest extent to the west, Elizabeth to the south, and Endicott to the east. (For those unfamiliar with these smaller streets, imagine the area bounded by Shields, Prospect, LeMay and the river. Now shrink that down by about 2/3rds and that was the full extent of Fort Collins in 1900. And it should be noted that those were the boundaries, but that didn’t mean that every lot within those bounds had been built upon yet.) 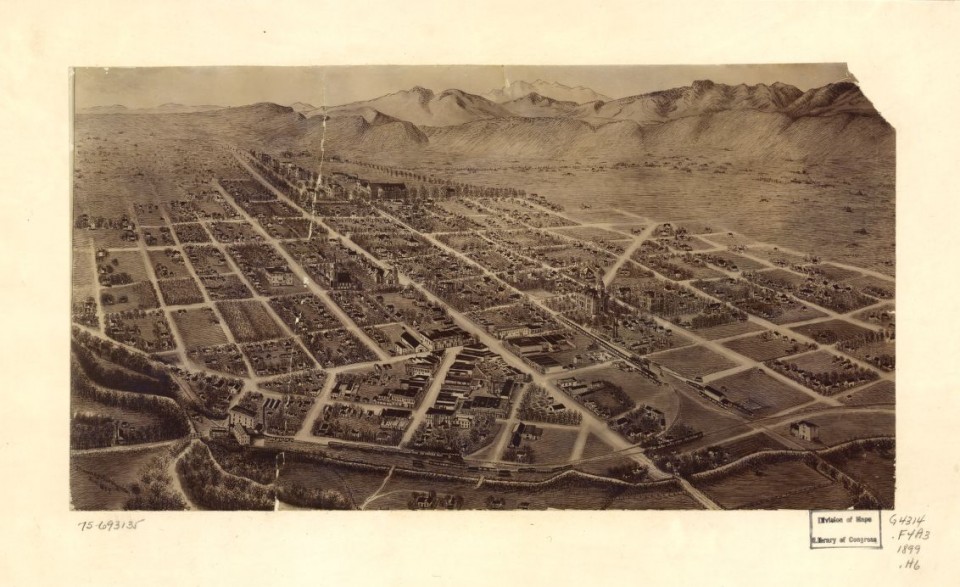 An artist’s rendering of Fort Collins in 1899. (From the Library of Congress.)

As the country began to recover from the recession, Fort Collins grew again. The newspaper encouraged readers to buy land, stating that “Real estate in Fort Collins is at its lowest ebb–it never will go lower–and the man who makes judicious investments now in city property is almost absolutely certain to gain by it. The town is experiencing a steady, substantial growth year by year, in population, in wealth and the volume of business transacted.” (Fort Collins Weekly Courier, January 12, 1899)

One might almost wonder if the writer of the Courier was also dabbling in real estate with newspaper entries such as this one:

“While Berthoud has experienced a steady, substantial growth during the past few years, it has by no means kept pace with the growth in population, resources and wealth of the surrounding country and must yet do considerable building to catchup. The present year promises to be an active one in that line, and the town will no doubt extend its boundaries far beyond its present limits, along various lines. May it grow and expand until there isn’t room for a hen house between the Big and Little Thompson streams, is the wish of the Courier.” — Fort Collins Weekly Courier, January 12, 1899

Not everything was unicorns and rainbows, though. Then, as now, there were issues that needed to be resolved and in April 1899, a recommendation was made in the paper to form a “village improvement society.”

“What about a village improvement society? Is Fort Collins to have one or not? Such a society, properly conducted, would be a wonderful help in wisely directing efforts put forth for the physical betterment of local conditions.” — FCWC, April 13, 1899

The city is looking at something similar today, though because we’re so much larger now, rather than have a society to improve the city, they’re focusing on neighborhood groups. In fact, the idea is so new, that they’ve just set up a survey that residents can take to give feedback on whether they feel like they’re well enough connected to the city government and what areas they’d like to see improved.

In the first thirty-six years of Fort Collins’ existence, growth was seen as a blessing, eagerly sought after and embraced by the community. The more people there were, the more opportunities the city would be able to take advantage of and the happier its members would be. As the paper explained:

“The first year of the new century is especially full of promise for the intelligent, energetic and enterprising people of the county. The building of a million dollar sugar factory at Loveland and the introduction of a new and profitable industry–that of sugar beet growing–which are now assured, will mark the beginning of a new era in the growth, welfare and prosperity of the people. These new and important factors will serve to stimulate and promote growth in population, wealth and the happiness of the people. They will insure more and better roads, more and better schools and great social and religious privileges. The future of Larimer county is indeed a bright one, and it is not an idle boast to say that no county in Colorado offers greater advantages, or grander opportunities to the home-seeker and investor. It is exceedingly rich in developed and undeveloped resources, and its superior climatic conditions and scenic attractions appeal at once to all who come within its borders. Ninety per cent of its present population is composed of the hardy sons and daughters of the New England, Middle and Northwestern states and are noted for their hospitality and enterprise.” – Fort Collins Weekly Courier January 3, 1901

Fort Collins was clearly shaping up as a great place to be. So much so, in fact, that over time, people’s attitudes towards growth started to change. But that shift will have to be covered in a future post.

The map of Larimer county is from the Fort Collins Standard, April 01, 1874, accessed via Colorado Historic Newspapers.

To see the boundaries of the city through the decades, check out this graphic put together by the Coloradoan.

All newspaper quotes were gathered via Colorado Historic Newspapers. There are some sites that I would gladly donate to if they had a “donate here” button in the side column. This is one of them.

The photo at the very top of this post depicts the army camp that was the original Fort Collins. This drawing was found through the Library of Congress.