Loomis Addition: From Roosters to Welders and More… The story of an early FoCo subdivision

What do a strutting rooster, a door-to-door welder salesman, John Oliver, fresh cider, and untold numbers of CSU students have in common? They’re all part of the history of the Loomis Addition. 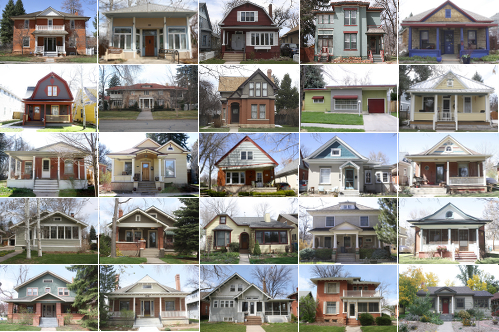 The Loomis Addition was one of the first subdivisions added on to the city of Fort Collins. It spans from Laporte Avenue to Mulberry Street. Washington Avenue marks the western border and Whitcomb Street marks the east. It’s made up of 15 blocks that vary somewhat in size and layout. It includes one mansion, one log cabin, several Victorian era houses, a bunch of Craftsman style homes, and some classic post war modern houses. It’s almost exactly half way between downtown and City Park, has a trolley that runs through the northern end of it, and has hosted a couple fraternity/sorority houses over the years, though none are located there now. 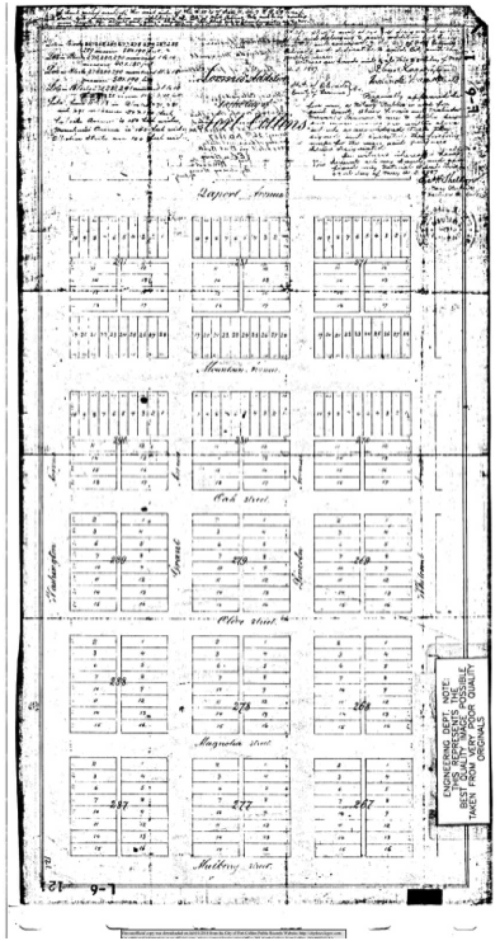 This is the original plat of the Loomis Addition, 1887. This image is from Humstone’s report on the neighborhood. (She got the image from the City of Fort Collins Engineering Department.) It’s hard to make out the text, but the two streets near the top, Laporte and Mountain Avenues, look distinctly wider than Oak, Olive, Magnolia or Mulberry.

On November 13th, Protect Our Old Town Homes (POOTH) is hosting a presentation and workshop on the history of the Loomis Addition. Mary Humstone, will be giving a short presentation on the historical context, residents and architecture of the Loomis Addition, followed by hands-on stations where volunteers will be on hand to assist attendees in learning to use materials from the historic archives to look up the history of their own house. Other stations will provide information and expertise on rehabilitating historic homes, as well as the financial and other benefits of landmarking your home.

I’ve been reading through the written report that Mary Humstone has compiled regarding the neighborhood and it’s incredibly interesting. It embeds the history of the neighborhood into the history of the city, which means that I’m learning a lot about trends across the city over time. But I’m going to save all those things for you to learn from Mary. Instead, I thought I’d focus on a few tidbits of the life and times of Loomis Addition residents in the early days.

145 N. Loomis and the Stewart Case family. Stewart was the grandpa of the Stewart Case that I wrote about back in March. Photo from the Fort Collins Archive. (My brother-in-law used to live in this house when he was a student at CSU. Many houses in the Loomis Addition have housed Aggie/CSU students over the years.)

Flipping through old newspapers reveals little snippets of people’s lives in the Loomis Addition. The residents of 828 W. Mountain had an ad in the December 6, 1905 Fort Collins Weekly Courier offering to launder lace curtains.  Just before Christmas in 1922, little Donna Doreen Sullivan (only 4 months old) was suffering from tummy flu at 816 West Olive St.  And in the summer of 1923, there was an announcement that Grant Street, from Laporte down to Mulberry, was going to be paved (for the first time!) 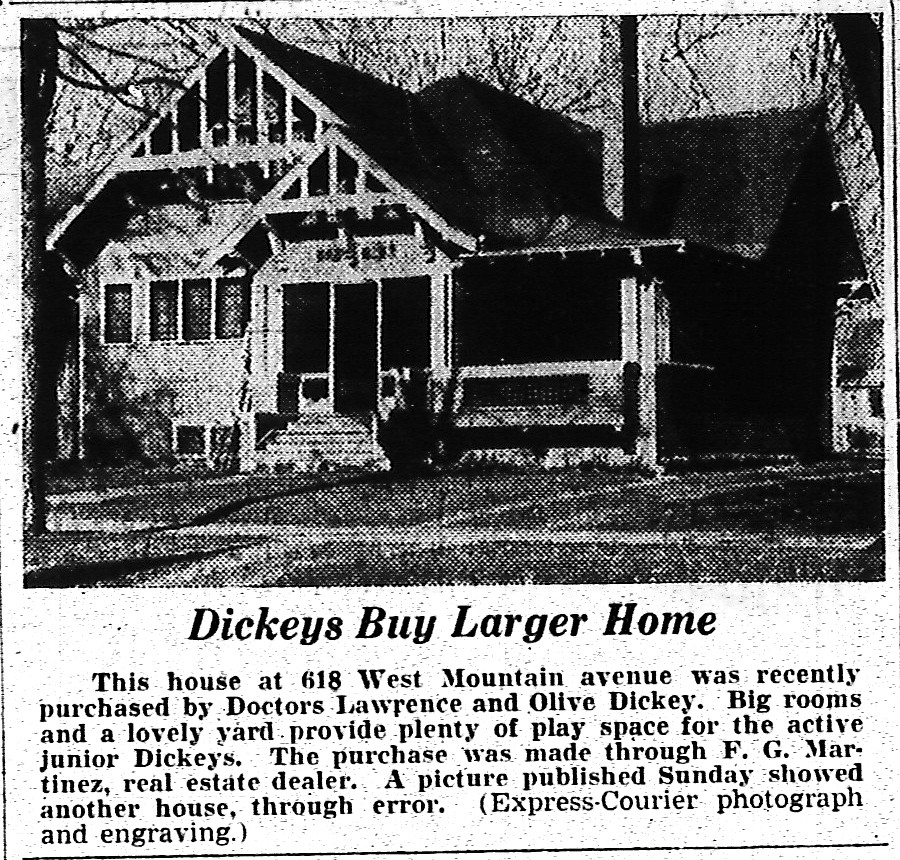 Though it was common in older newspapers to list the purchases of new homes in town, this clipping from the November 30, 1937 Express-Courier shows that photos had become a regular part of such announcements by the 30s.

The following was published on February 17, 1923 in the Fort Collins Courier and includes mention of two Loomis Addition locations:

About twenty-six members of the Junior Philathea class of the First Presbyterian Sunday School met Friday afternoon after school at the home of their teacher, Mrs. Carl L. Krause, 618 West Olive Street. After a short business session, the girls and Mrs. Krause went to the home of Mrs. Mae Milstead, 822 Laporte avenue, where a delightful supper was served, in honor of the birthday of Miss Alia Milstead, a member of the class. Alta was sixteen years old on Wednesday.

It wasn’t just the people of the Loomis Addition that were included in the local paper. This article is from the December 23, 1937 Express-Courier.

Boys driving their vehicles too quickly around turns is nothing new. This story from the June 20, 1921 Fort Collins Courier evidences this. The road wasn’t paved at the time.

Dewey Rice, 18 year old son of Mrs. Cieta Rice, 424 South Grant street, was unconscious four hours Sunday as the result of a fall from a horse. He was riding his horse around 9 o’clock Sunday morning when he attempted to turn into the lot at home, but the horse was going so fast that he failed to make the turn and ran into the fence. The boy was thrown and badly hurt about the head and face and one arm was hurt.

He was carried into the house apparently dead. Physicians, however, were able to revive him. Monday he felt some better and it is believed he will recover quickly as no evidence has developed of concussion of the brain or of internal injuries. 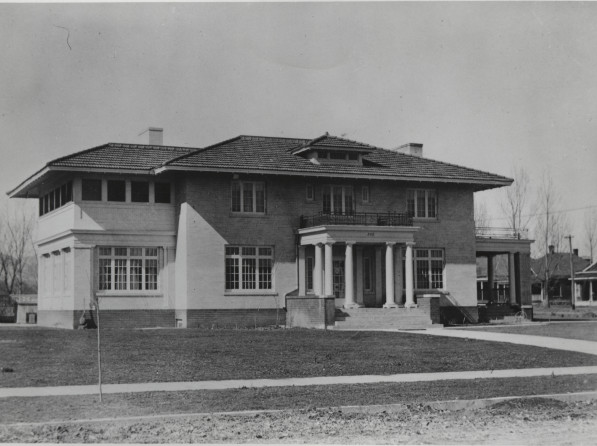 This house at 309 S. Grant was built for Thomas Reinholtz around 1919, but today is is known as the J. D. Forney Mansion due to the fact that James and his family lived there for several years. J. D. Forney got his start as a traveling salesman of welding equipment. This is the largest lot in the Loomis Addition taking up a full quarter of the block. Alpha Gamma Rho fraternity used this house for a couple of years in the 1930s. This photo is from the Fort Collins Archive and dates from around the 1920s.

I’ve tossed around the idea for awhile now of writing a post about all of the former residents of Fort Collins who, although not famous themselves, had famous names. So I was delighted, while looking for newspaper articles about former Loomis Addition residents, to discover a John Oliver who used to live on S. Whitcomb. For those who don’t follow the national comedian scene, there’s a John Oliver who used to be a part of the Daily Show with Jon Stewart and who now has a show of his own on Sunday nights called Last Week Tonight with John Oliver.

Our local John Oliver was mentioned in a November 1922 Fort Collins Courier article:

“Mr. and Mrs. John Oliver will move into their newly purchased home at 125 South Whitcomb street very soon. They recently returned from the east and have concluded, after trying both, that they like the west better than the east. They bought the house occupied by Mr. and Mrs. G. H. Johnson.” 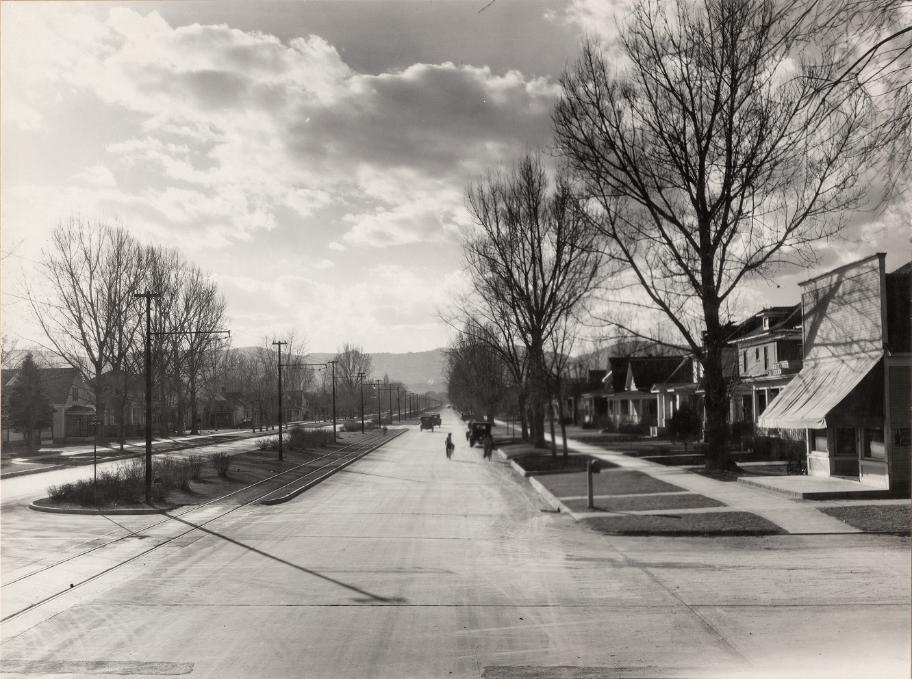 This 1928 photo of the 700 block of W. Mountain shows the only corner store located within the addition (to the far right) as well as the view towards the mountains that’s much harder to see now-a-days with the more mature trees not only along the sides, but down the center of the street as well. This photo is from the digital CSU Archive & Special Collection.

An ad in the October 8, 1921 Courier offers fresh cider at 210 S. Grant Street for 35¢ a gallon. Also for sale was Reefer’s “More Eggs” Tonic – 50¢ for a dollar box or 3 boxes for a dollar. (The tonic purported to help your backyard chickens to lay more eggs.) There were several other ads listed for the 210 S. Grant location including all sorts of household odds and ends. It’s possible that a small resale shop was located in the front room of the house in that location. 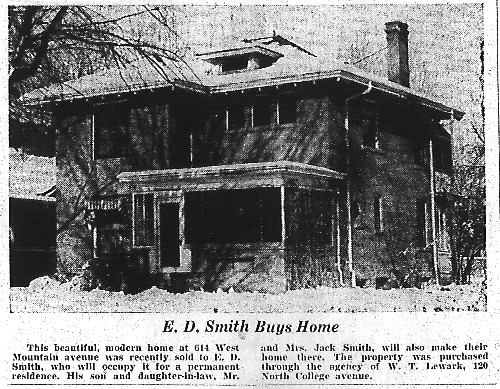 This December 19, 1937 Express-Courier notice announces a change in ownership for this house at 614 W. Mountain.

It’s fun to read back through old newspapers and hear stories of families that used to live in Fort Collins during a different era. Though we’re separated from these people through time, it’s possible to connect with them through place simply by walking the streets of this old neighborhood.

There’s a lot of history in these old houses.

Although I’ve been reading through Mary Humstone’s context document in preparation for writing this post, I really did try to save all of that wonderful information for the meeting taking place at the Museum of Discovery on November 13th at 6:30pm. Most of the tidbits that I found were through the use of the Colorado Historic Newspapers website. I also dropped in to the FCMoD Archive and used their microfilm of the 1937 Express-Courier to get the pictures of two recently sold houses as well as Oscar the rooster.

The collection of house photos at the top of the article were all taken by myself. Other photos came from the FCMoD Archive’s online collection, the 1937 Express-Courier, and the Colorado State University Archives & Special Collections website. I did take one photo from the context that Humstone Consulting put together and that was of the original plat of the Loomis Addition. Mary credited that image as being from the Fort Collins Engineering Department.

Everyone is welcomed to the Loomis Addition event happening on the 13th. You don’t have to live within the Addition to enjoy learning about its history or to use the resources available that night to research your own house.