By 1970, American soldiers had been operating in Vietnam for almost half a decade. Anti-war sentiment was running high. “Question authority,” a quote from Socrates, would soon become a popular slogan for bumper stickers. It was in the midst of this attitude of mistrust that Earth Day was born. 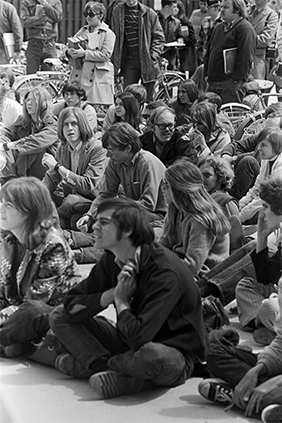 CSU students in 1970 at a teach-in. Photo thanks to the CSU Archives and Special Collections Department.

Rachel Carson’s best selling book, Silent Spring, came out in 1962, sparking the realization among a small minority that severe changes were taking place in the environment with dire consequences.  In 1969, a massive oil spill in the Santa Barbara Channel (the largest oil spill in the U.S. at the time, now ranking third behind the 2010 Deepwater Horizon spill and the 1989 Exxon Valdez spill), provided a spark to an already smoldering idea that people were causing major damage to the global ecosystem. Gaylord Nelson, a U.S. Senator from Wisconsin, used the oil spill as a catalyst to harness some of the energy that was already vibrant in the  anti-war movement and redirect it to power a national environmental movement. His idea, announced in 1969, was to call for a national teach-in on the environment on April 22, 1970. By January of 1970, this day was called Earth Day. 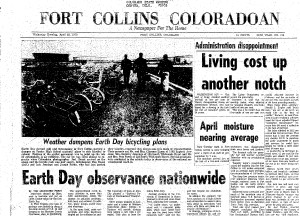 The front page of the Fort Collins Coloradoan, April 22, 1970 – the first Earth Day in Fort Collins.

Fort Collins appears to have embraced Earth Day right from the beginning. Events were planned all week at Colorado State University, but other groups also had events. Blevins 9th graders had an all day teach-in that included taking a field trip to the Rocky Mountain Forest and Range Experiment Station. Poudre High School students biked to school to protest pollution from automobiles. They then had a couple of speakers including an economics professor who spoke about the conservation of resources (such as air and water) and the loss of these resources through pollution. 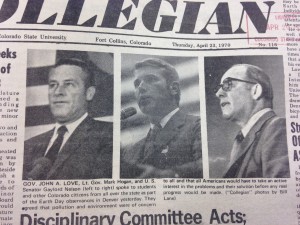 CSU students heard the Colorado governor, lieutenant governor, and the founder of Earth Day speak in Denver. Image from the CSU Collegian, April 23, 1970.

Some CSU students took buses down to Denver where they heard Gaylord Nelson and others speak.

As I read through accounts of the first Earth Day here in Fort Collins, and I considered Earth Day events that I’ve attended here in the past couple of years, I was struck by the difference in the style and tenor of these events. The late ’60s and early 70s were a time of passion and emotional opposition. But there also seems to be a sense that the people who understood the damage that was being done to the environment, and who were really personally invested in making a change, were but a minority faction within the larger American population. My favorite example of this involved the “Bike Riders for Life.”

In 1970, Earth Day (the 22nd) fell on a Wednesday. But the teach-in started on Monday and was kicked off at noon with a rally on the CSU Student Center Plaza. Gary Snyder, described as a poet and ecologist, spoke about the cancer of pollution that was plaguing the earth. He encouraged people to stop using oil, coal, and electricity. He also supported the use of other forms of transportation than the automobile. 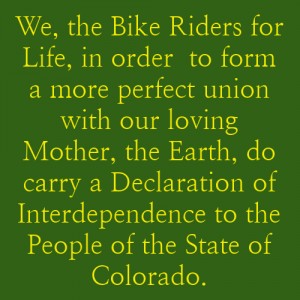 This “Declaration” seems to me to embody so much of the ethos of the Hippie movement.

As you read through the front page article about the rally you can almost hear the passion and fervor of the students as they attend this rally and then plan this ride. …And then the article explains that the group consisted of 13 Boulder students and only one CSU student. It doesn’t appear that they picked anyone up in Greeley, and when I looked for a mention of Governor Love signing this document, I couldn’t find anything at all.

And this, to me, seems to sum up the first Earth Day. It really was just a spark. Most people seemed to have no clue about pollution or what to do about it. There wasn’t a clear sense of what could be done to combat these problems other than to hold rallies, recognize that pollution was bad, and demand that the governor take a stand on behalf of Colorado. People were just beginning to get a handle on the fact that there was a problem. Actual, personal responses were still few and far between – like 14 lone bicyclists pedaling their way to the state capital. 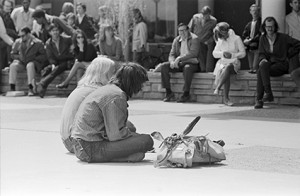 Students at the first Earth Day at CSU in 1970. Photo thanks to the CSU Archives and Special Collections Department.

Fast forward to today. Recycling is no longer a big deal. It’s something we do almost without thinking. Composting is our new frontier. (And even that is becoming old hat.) Electric and hybrid cars are popular, and bikes – oh how we love our bikes! We’re no longer doing these environmentally conscious things in anger or as a sign of protest. We’re doing them because we’ve embraced the idea that these simple things can make our world a cleaner, healthier place. “Being Green” has gone main stream. Earth Day events now-a-days aren’t about teach-ins and rallies but about folk music, planting seeds in pots handmade from newspapers, signing up for a local CSA (Check out FarmingFortCollins.com for CSA info.), and collecting new recipes for all the local foods we’re going to buy. (Check out ServingUpFortCollins.com for great recipe ideas.)

The front page of the CSU Collegian, on April 22, 1970, included a little box in the upper left hand corner that said, “Be an Environment Freak.” Back then, the environmentalists were the freaks — a small, freakish minority. Today we’ve seen enough oil slicks, heard enough stories about contaminated water, recognized the value of recycling paper, tin, and glass, and smelled the spew from the asphalt plant on Taft Street and we know that we prefer living in a clean land, with clean air and clean water. The environmentalists are no longer the freaks they once were, nor are they the minority. That day 44 years ago was just a spark, but it has lead to an entire cultural shift in how we view our relationship to our planet. And Fort Collins was a part of that movement.

“Earth Day: The History of a Movement,” also gave me an overall sense of the history of the movement.

The line from the “Declaration of Interdependence” was taken from April 21, 1970 CSU Collegian front page.

Access to the 1970 copies of the CSU Collegian were thanks to the Archives & Special Collections department at Colorado State University. Thanks also go to the CSU Archives for the photos of students at CSU Earth Day events.