Fresh Blow Being Struck By Huns – Fort Collins in 1918 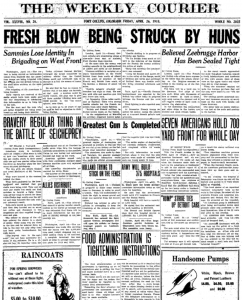 Front page of the Weekly Courier on April 26th, 1918, in Fort Collins, Colorado.

I wanted to check out the Fort Collins Weekly Courier, but as you can guess, it only came out weekly, so there wasn’t an edition on the 24th of April in 1918 (which was a Wednesday). We’ll be looking at the April 26th edition instead. The Weekly Courier was a supplement to the Fort Collins Courier. It was available from 1898 (or 99?) to about 1919. It came out every Friday.

Almost the entire front page (and most of the inside of the paper, as well) had to do with the Great War. As I read through these articles I was struck by the tenor of the writing. The reality of war was palpable in the words of each story. Despite taking place on the other side of the world, these articles made it feel as if the war was just over the next hill.

Reading an old newspaper can in some ways be an immersive experience. You are reading the words of someone who was living and interacting with the world at that point in time. Because I think these articles (many of which were from the United Press) have such a clear tone that rings true for this time period, I’m going to transcribe entire sections of articles here rather than simply summarizing the content. I will intersperse ads or other items from the paper between each quote.

All punctuation is original to the text. (There were a couple of instances that surprised me – such as no comma between the last and second to last items in a list, and a comma after quotes rather than within them. I think of both of these as modern formats.) 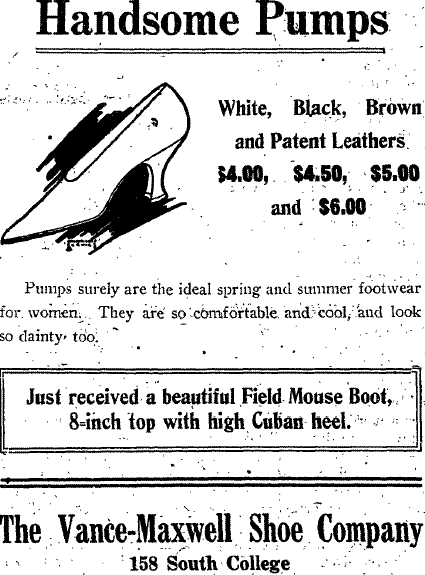 This shoe ad was on the front page, surrounded by news stories about the Great War. The Weekly Courier, Fort Collins, April 26, 1918.

Bravery Regular Thing in the Battle of Seicheprey

·American Army in Lorraine, April 23 (Night.) — The story is told how two American girls, wearing gas masks, stuck to their posts only one and one quarter miles from the front on Saturday when the Germans attacked Seicheprey.

They were located in the canteen behind the lines.

They were awakened by the bombardment and realized that gas shells were being used. They put on their gas masks but could not find matches to furnish a light. Irene took off her mask to search for them while Gladys kept watch over her sister and they executed the task without untoward result.

Both girls stayed up until daylight and then they hurried out to serve hot coffee and chocolate to the doughboys and they supplied doughnuts and pies.

The officer in charge of the village ordered the sisters to a place of safety. Their camp was too close to the line and he ordered them to ride in the rear but only after they had been under bombardment for eight hours.

“The bravest man in the regiment” has not been mentioned because of his reticence. He is a 19-year-old boy. On Saturday when the bombardment was at its heaviest he made seven trips thru the barrage carrying ammunition to the gunners. Twice he was buried but extricated himself and kept up his work.

American soldiers armed only with their automatics charged eight German machine guns and captured all of them.

One-quarter of the shells fired on the Americans landed in Seicheprey. 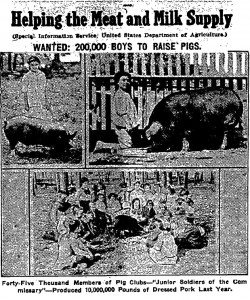 Boys were encouraged to raise pigs for the war effort. 1918

With the French Armies in the Field, April 23 (Night.) — How an American lieutenant and six men held a front of 700 yards all day when the Germans made their attack on the Americans at Seicheprey is told in the official report of a French colonel who commanded men who co-operated with the Americans.

“After the joint counter-attack I personally visited the battlefront and everywhere there was evidence of deperate hand-to-hand fighting. I found that the Americans had stood up for two hours under a bombardment defending themselves valiently [sic]. As a result the enemy suffered very heavy losses.

“Two American machine gunners became separated from their company and tho [sic] surrounded by the Germans they refused to retreat and engaged in hand-to-hand encounters.

“When the Germans finally reached the American positions the Americans blew up their guns and retreated.

“In the evening the hospital at Seicheprey was blown up and all the doctors and nurses in it were either killed or wounded.

“The head doctor of an American regiment voluntarily took up the work in the village. He seized all the available French and American ambulances and dashed thru the barrage. He attended all the wounded.

“An American group in Seicheprey after being surrounded broke open grenade cases and continued to defend themselves. Nine of the 23 were still alive in the evening.

“An American cook fought with hand grenades and then his rifle until he dropped dead.

“An American lieutenant with six men took up the patrol of a front of 700 yards keeping in contact with the battalions on either side and they kept the Germans off all day. One of these men was injured and he was ordered to the rear but instead sought a shell hole and there defended himself.” 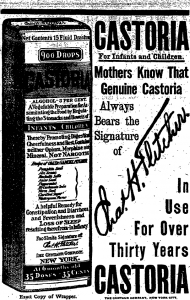 Castoria was baby medicine, but it was also 3% alcohol in an era when alcohol was prohibited. So perhaps more than just babies consumed this “medication”?

The enemy is among us. He may look innocent, but he is a public peril. He may have no evil intent, and yet his acts are hostile and murderous. He scatters death among us no less surely than a Prussian air-raider bombing a defenseless city. And his methods are more insidious than those of the air-assassin, and his weapons more deadly than exploding bombs.

He is the careless man, woman or child who scatters disease germs by promiscuous coughing, sneezing and spitting.

The drive is on. The germs, like the Germans, celebrate the coming of spring with a tremendous assault. Colds, coughs, grippe, pneumonia, tuberculosis and the rest marshal all their forces. Every sufferer is a gun belching disease as a German battery belches shells. At home, at friends’ houses, in street cars, in railroad trains, in offices, in church, in school, in lodge meeting, wherever human beings congregate, the invisible peril lurks.

And it’s such an unnecessary peril. If people would only keep their coughs, sneezes and salivary secretions to themselves, there wouldn’t be any of these epidemics. There would only be sporadic cases, dying out without spreading. And that would mean an incalculable saving in comfort, energy, efficiency and human life.

The army medical corps says that nearly all the sicknesses and deaths in our new armies have been caused by “respiratory diseases”, such as pneumonia, measles, mumps, diptheria, meningitis, influenza and tuberculosis. All these ailments are communicated in the same way, by the transfer of nasal and mouth secretions. The sickness rate in all our military camps would be cut to a minimum, they say, if the soldiers and the general public would only stop careless coughing, sneezing and spitting. And so could the sickness rate in every community.

It would be literally equivalent to a great military victory, or the raising of a great army, if we’d all stop the nasty practice of coughing and sneezing into other people’s faces and spitting germs all over the neighborhood. 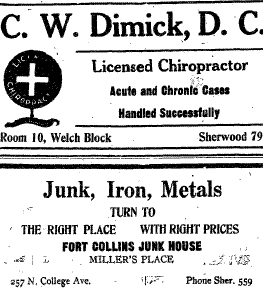 With the Colors
Wednesday evening, April 4, 1918

Dear Dad: The more I see of the army and big army camps such as are around here the more I realize the tremendous amount of kale it takes to carry it along. Then think too of the additional cost when the army gets across.

The people are so far getting off pretty easy as the government pays them 4.1-4 per cent for the use of their money which is a good deal more than some of them are able to make on it.  [ I believe he’s talking about war bonds here.]

These weeks are going to be critical ones for all the allies. If the damned Huns can be held in this drive their goose is cooked for it looks as if within another six months our army can count for something. If the British fail to hold them we’re in for a long, long fight which will surely be disastrous to thousands of men, and untold amounts of property.

Have not received any orders yet and as there is another group of men coming in this week I suppose I’ll be here until May 10, when the officers training school [It looks like part of the letter is missing here.] The captain told me that I’d go there from here if any one goes. The course there lasts eight weeks. That’s the biggest honor that a man can get in the orderly department when he enlists as a buck private as I did. My only hope is that nothing comes up to block the luck.

Wish I could be there these hot days and take a trip into the hills and after May 25 take an occasional trip up into North Park or some equally attractive place in search of a few mosquito bites and fewer fish. I see the Denver Times most every day as one of the fellows in the permanent camp here takes it and turns it over. Like to see the Fort Collins paper occasionally.

[Harley Watson was made a second Lieutenant in September, 1918. I wasn’t able to find out anything about him after that point, so I don’t know if he made it home after the war.]

The Douglas delivery service and an ad for Rat Corn, 1918.

The Fort Collins Weekly Courier, 26 April 1918. I accessed this newspaper through the Colorado Historic Newspapers Collection.