Christmas at a Homesteader’s Shack

Last week I wrote about native son, Hugo Evon Frey. Today I bring to you one of his stories. I don’t know whether or not the story is true. Where facts don’t seem to line up, I’ve made a note. But given that he seemed to often write about tales from his own life, it’s quite possible that either Hugo was one of the men in this party or he at least knew one of the men. 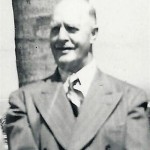 I became a traveling representative for the Globe Mercantile Company. This was in the days before automobiles were so popular. I was in the northern part of Colorado and had joined forces with two other traveling men, that we might share the expense of an auto and save time. The auto was a 1906 Ford Model T.

We had finished our calls and were hurrying back to a good hotel in Greeley, when we missed our bearings and lost the road. Not a house was in sight as far as we could see. Nothing but prairie, prairie, prairie.

Prairie dogs kept up an incessant chatter and coyotes tuned in between times. We were utterly lost. We couldn’t even tell which direction we had come. This was in the days of dirt roads.

Finally, on topping a small rise, we noticed what we took to be a shed of some kind. It turned our to be a homesteader’s shack dug into the bank of a dry creek, with a roof of cottonwood limbs and dirt for covering. 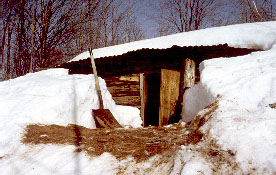 The door was made of pieces of rough boards nailed together, and the window consisted of one pane of glass fitted crudely into a hole.

What was our surprise to find three children there — a girl of twelve, a boy of nine and a girl of six. The children were glad to see us, but their frightened eyes glowed like coals of fire. We spoke kindly to them and gradually gained their confidence. They gave us careful and minute directions on how to find the main road.

“Where are your parents?” we asked, thinking they had probably gone to town or something.

The older girl answered…, “Our mother is dead. Father works on the section [the railroad].” 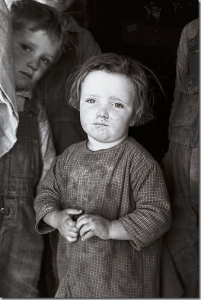 “How often does your father come home?”

“About once a month. After payday.”

And then the little girl chimed in. “Daddy is coming home for Christmas and Santa Clause is coming! See our tree!”

The “tree” turned out to be an old cottonwood twig. Goodness only knows how far they must have carried that little branch. Dry as a bone. No bark or leaves on it. An old rag doll, whose features had been defaced by tears and kisses long ago, hung suspended by a broken arm on one twig. On another hung bits of bright cotton rags.

But that old twig meant more to those children than the greatest tree that ever adorned a beautiful home.

As we started out, the boy pointed out the mother’s grave on a hillside not far away. That grave was surrounded by pebbles, neatly laid by loving hands, and the ground was worn smooth where little bare feet had trod, and little knees had knelt. That small grave was a shrine that meant more than the giant tombs of Washington or Grant.

We were hurrying home for the holidays, looking forward to comfortable rooms with tiled baths and steam heat. And here were children in a desert hovel. their only heat from a fire made with buffalo chips. Shivering and trembling, they watched us as we were about to depart.

One of my partners took out a cigarette and was about to strike a match when he heard a groan from the lips of the boy.

“What’s the matter, sonny?” he asked.

His little sister answered for him. “Oh, Mister, we got only three matches left.”

That cigarette was thrown violently to the ground. He carefully replaced the match in the box and handed it to the boy. The little fellow didn’t say “thank you” with his mouth, but his whole soul showed his appreciation. 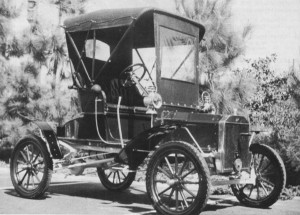 1906 Model N Ford (Photo from brassauto.com)
A flivver is a cheap car that gives a bumpy ride.

When we reached Greeley, tired and worn, we went to the hotel. But our anticipated joy was not forthcoming. We ate our meal in silence, thinking back on what we had seen. After dinner we made a dash for the nearest shops. We bought and bought until our pocketbooks were limp. We piled those things into the flivver  and started back across the prairie.

“Can you find the way?” cried Charley?

“Find the way! I could find it in the dark.” That trail was burned into our memories, never to be forgotten.

We reached there at dusk. We honked our squeaky horn and tumbled out in such haste that the children cried from fright. But their cries quickly turned to shouts of joy as they beheld the things we bought.

We set the real Christmas tree in the corner and decorated it until its limbs cracked. The children’s cries of happiness must have been heard in heaven.

Suddenly we missed the littlest girl. We looked for her, but it was not until we heard a voice out on the hillside, at the mother’s grave, that we discovered her. We removed our hats while hot tears coursed down our cheeks as we heard her say: “Muvver, Muvver, see my dolly!”

Was it a breeze we heard sighing, or was it a mother?

I was able to find a Globe Mercantile Company located in Loveland around 1916. Hugo Frey was living in Fort Collins during that time and was doing a fair bit of traveling while he tried to bring a breakfast food factory to the Fort Collins area.

This story was published by the Senior Voice in December 2010. The copy that I used, however, was likely printed in the same publication but much earlier. I received the story from Joan Day. There were some differences from Joan’s version and the 2010 version. What is published here is a mix of the two, retaining such information as the name of the city (which was in the older story) while adding some bits from the newer version (such as the last line. Was that Frey’s or was it added later by an editor?)

The photo of Hugo Frey was added to Ancestry.com by his niece (or possible great niece?), Nancy Claussen.

The photo of the shack was as close as I could find to the description in the story. It was found on Backpacker.com and shows an old trappers cabin.

The photo of the little girl was from the Farm Security Administration – Office of War Information Photograph Collection (Library of Congress). It shows a little girl in Tennessee during the Great Depression, but I suspect the children in the small shack were probably in similar shape.

The photo of the Model N is from Brassauto.com. I tried to find the article that it was in, but the link that Google gave me didn’t take me to the article with this photo.