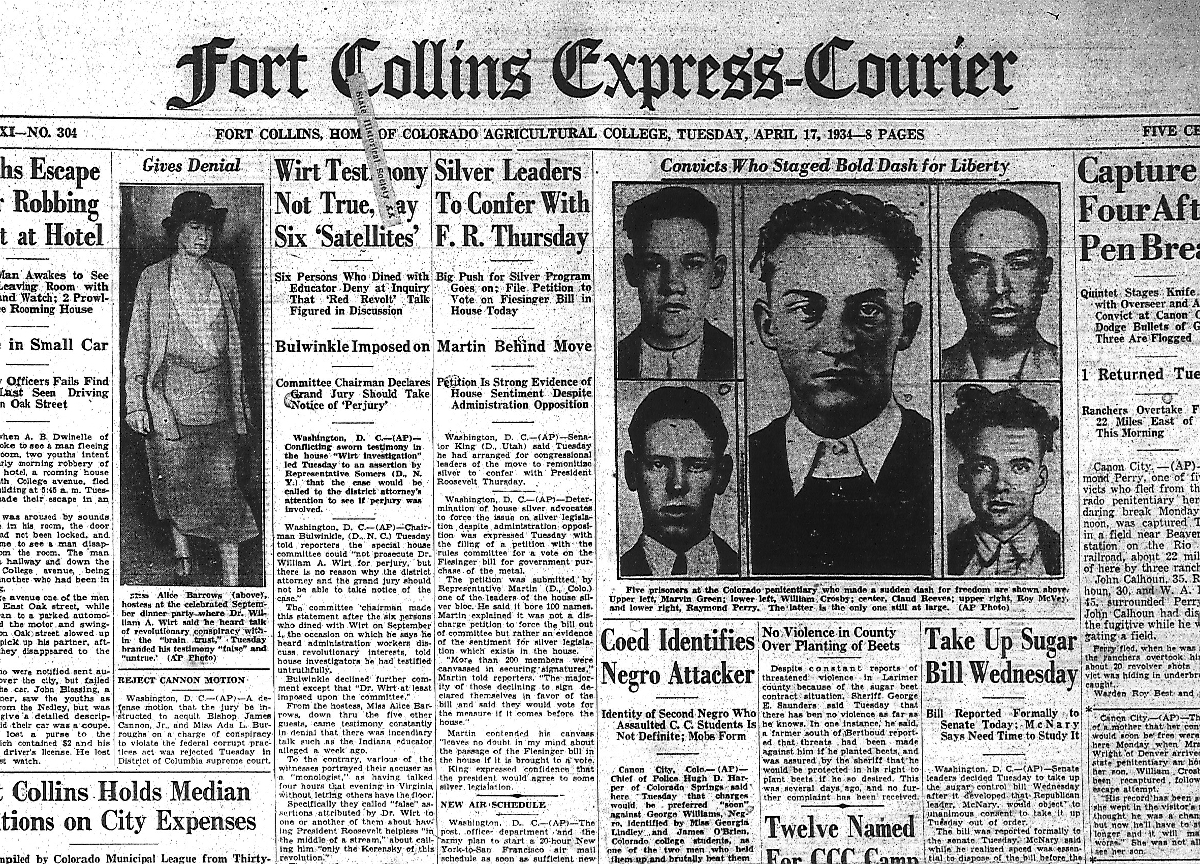 The front page of the Fort Collins Express-Courier, April 17, 1934.

The front page of the April 17, 1934 Fort Collins Express-Courier bears the subtitle, “Fort Collins, Home of Colorado Agricultural College.” I looked back through the other papers we’ve looked at and none of them include that line. It makes me immediately begin to wonder, what was going on in 1934 that the paper felt it important to note the relationship of the city and the school? Perhaps with the drought and Depression, it was the college that enabled Fort Collins to get by. According to the Fort Collins History Connection, many students chose to remain in school rather than enter a weak job market. Isn’t it neat how a change in one little line in the paper can provide an important peep hole into the situation of the time?! 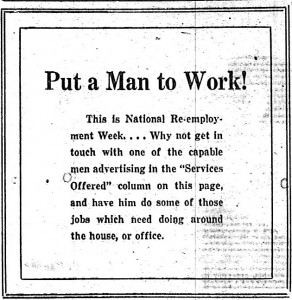 The Great Depression left many looking for work.

Front page news 80 years ago today included a hotel robbery, fear of communism, a near-miss mass lynching, a prison escape, and a Fort Collins artist being honored in Denver.

A Walden guest staying in the Nedley hotel at 132 S. College woke up to find a young man in his room. The youth ran, joined up with a companion, and fled by car down East Oak Street. A watch, two dollars, and a drivers license had been stolen. 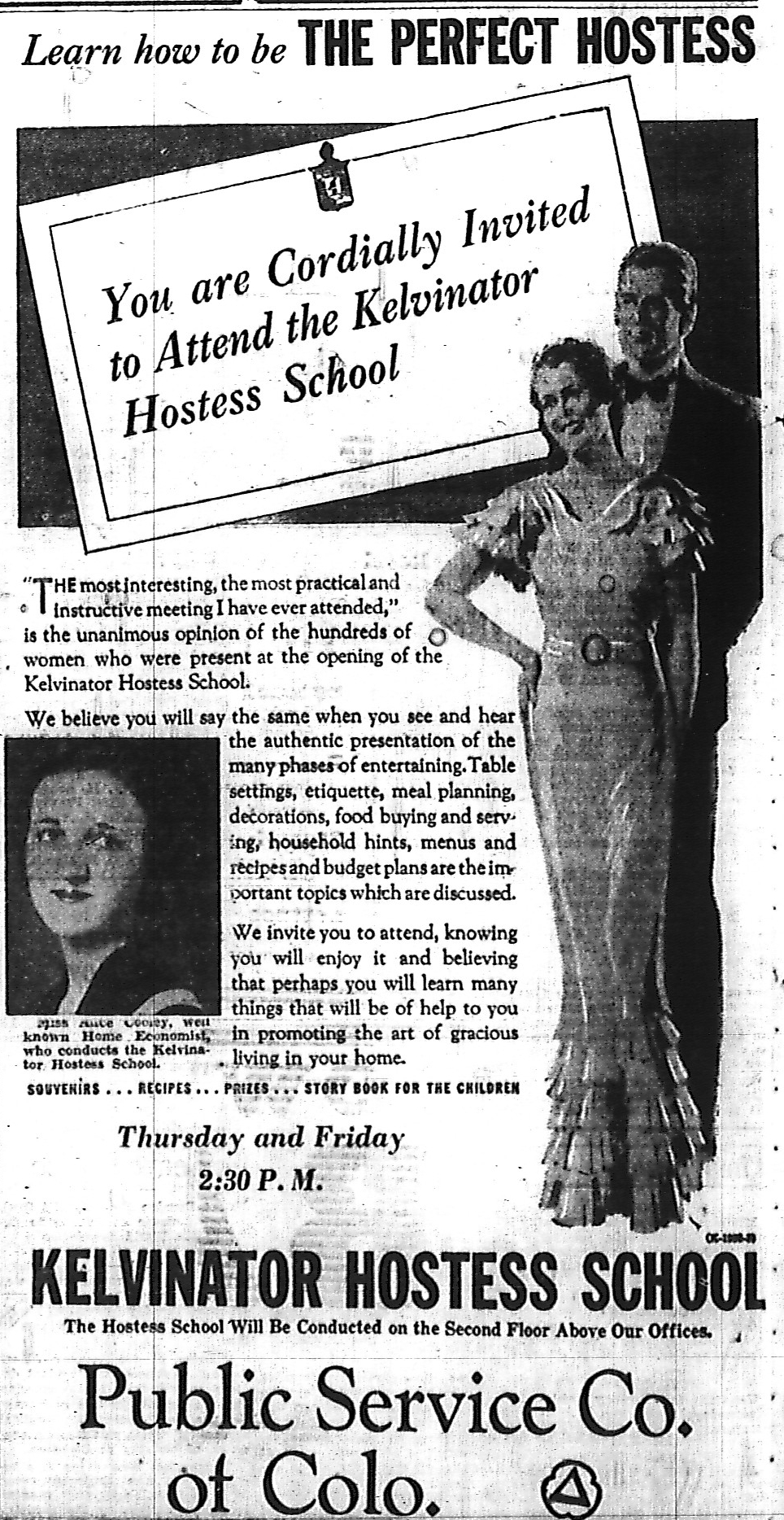 Women were invited to learn how to be better hostesses at the Kelvinator School .

Democratic Chairman Alfred Bulwinkle (North Carolina) had been accused by a school superintendent, William Wirt, of speaking about a “Red Revolt.” (They don’t mention the term communism anywhere in the article that I could see.) The five other guests at the dinner party in which these comments were allegedly made claimed that Wirt so hogged the conversation that Bulwinkle couldn’t have gotten a word in edgewise and that he certainly hadn’t talked about a red revolt. (I had no idea there was a person named Bulwinkle! I always thought he was a cartoon moose. I wonder if the cartoonist picked up the name from this accusation, even though the real Bulwinkle was exonerated.) 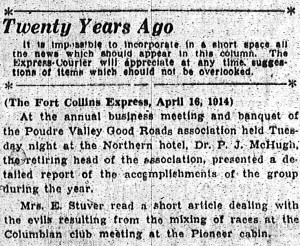 A column in the Express-Courier included snippets of articles from newspapers twenty years previous. Not only is the selection of articles somewhat odd, but there’s no response given to indicate whether they were being reprinted as a form of agreement or as a glance back to more ignorant days.

Two white Colorado College students had been beaten and robbed of $4, allegedly by two black men. The Colorado Springs police rounded up five black men, only one of which had been positively identified as one of the attackers. Mobs around the jail grew to about 1000 people, demanding that the “negroes” be turned over to them, but the prisoners had been whisked off under guard to another location. I tried to find out what happened in this case, but could only find newspaper mentions from the 16th and 17th of April and there didn’t appear to be any follow up articles on the case.

Five men (shown in the photos on the front page) had escaped from the penitentiary in Cañon City. All but one had already been recaptured by the time the newspaper went to print.

Dr. L. W. Durrell, a botanist by profession and a local Fort Collins resident, had studied water color painting and was having a set of his paintings sent down to Denver for display. Fort Collins was proud to have a native son honored in this way. 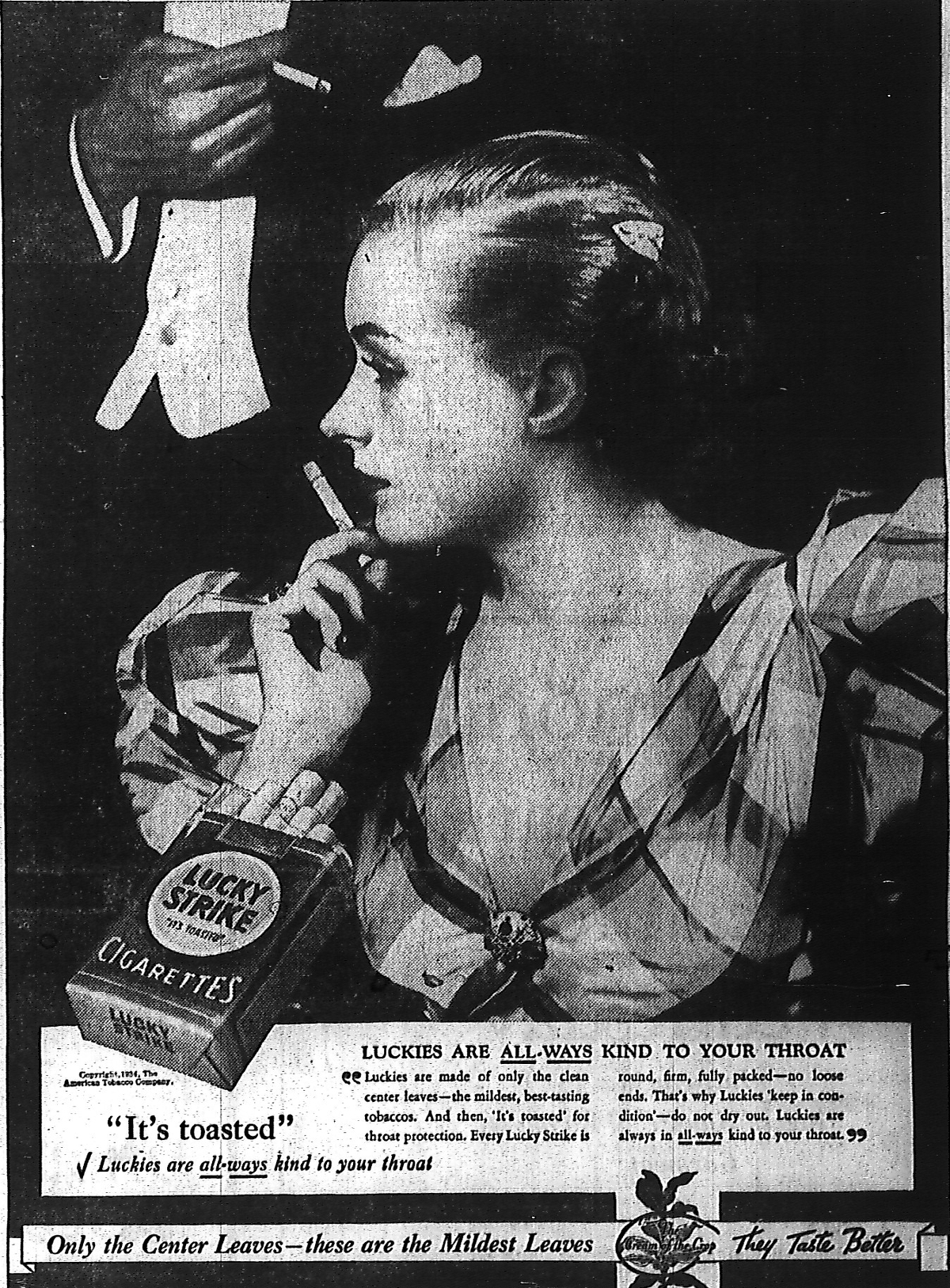 In other news, Trotsky was being ejected from France, Babe Ruth was beginning his 21st season, and the United Nations were being praised for not recognizing Manchukuo (AKA Manchuria, which the Japanese had seized from China). 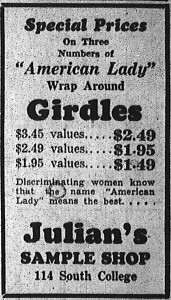 Because every discriminating woman needs a girdle, right?

One thing I appreciate in looking back through these old newspapers is how much they embody the culture of the time. They don’t come right out and say things like “Women should all be pretty hostesses and no more,” but its clearly implied in the ads. 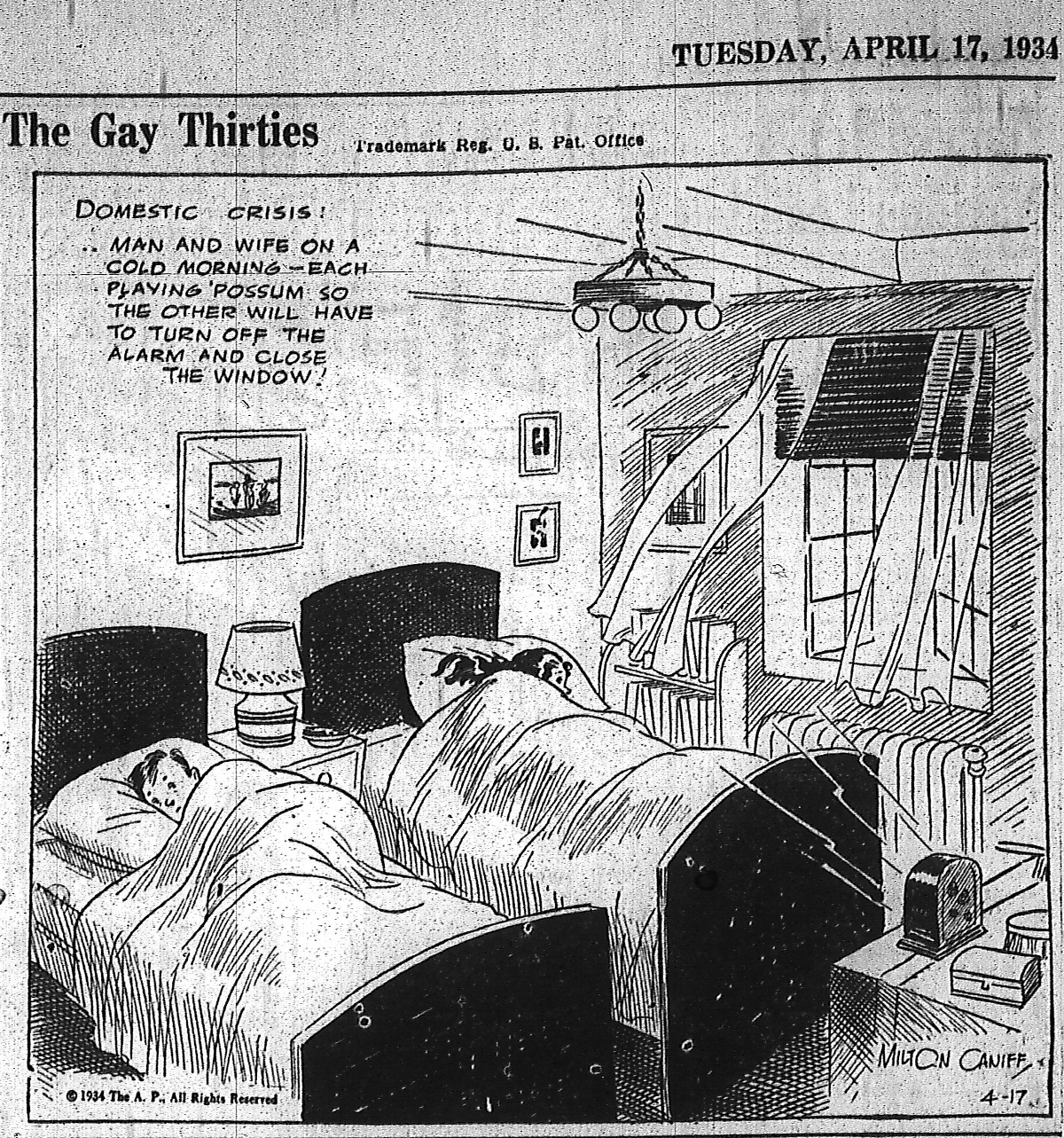 The Gay Thirties – Where husbands and wives were always sure to keep a nightstand between them.

I saved the best for last. This cartoon is grand on so many levels. First of all, what in the world was gay about the thirties? The twenties, perhaps. I could see the Roaring Twenties also being called the Gay Twenties. But the thirties? Really? And this couple. They look like kids! But they’re called man and wife, yet they sleep in separate beds. Did couples really sleep like this? Or was this just a convention for the eyes of the public? (Ironically, I came across an article just this morning on The Case for Separate Beds. So maybe this depiction is more authentic than I realize.)