Growing Up at City Park

Swimmers enjoying the pool at City Park. (Photo from the Fort Collins archive.)

Part of the idea behind the name Forgotten Fort Collins is that as time passes, we not only forget people and events, but our built landscape also changes and we begin to lose our collective memory of how things used to look. And knowing how things used to look can also give us a glimpse into how things used to be — what it was like to live in this area from day to day. Remembering doesn’t require rebuilding what was there before. Pictures and stories play an important role in helping us to connect with the past. But historians often record the big events, the grand changes, the cataclysmic happenings. They don’t always think to write about the simple things, like where teenagers used to go to park. 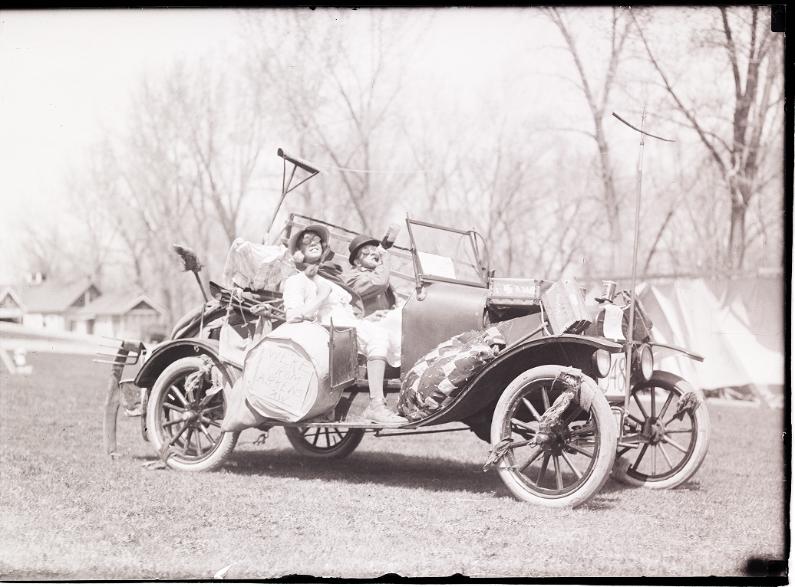 This photo doesn’t exactly fit with the City Park theme of this post. But it approximates a young man and woman “parking.” … sorta. And it’s absolutely hilarious. So I’m including it here. But it appears to have been part of a College Days celebration in 1923. (Photo from the CSU archive.)

So, today’s post is going to focus in on mid-century City Park, with the idea that we don’t want to forget the casual times spent under the sun and stars — times that might not have been “grand” or “cataclysmic,” but that reflect who we were as a city at that time. 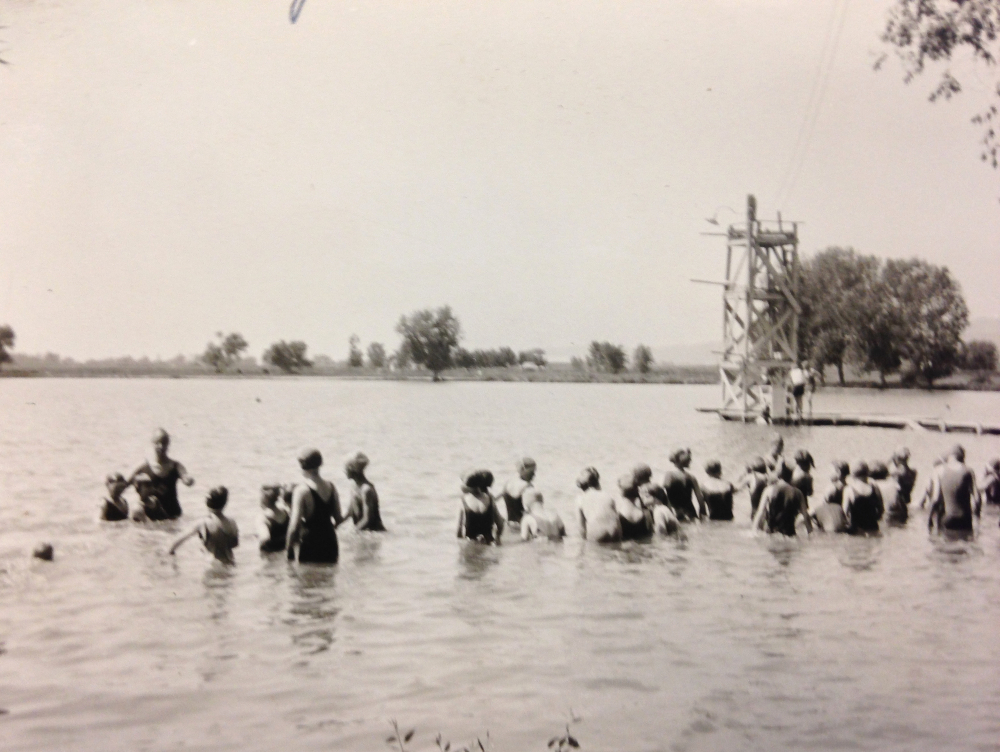 The City Park pool diving board can be seen off to the right. (From the Fort Collins Archive.) 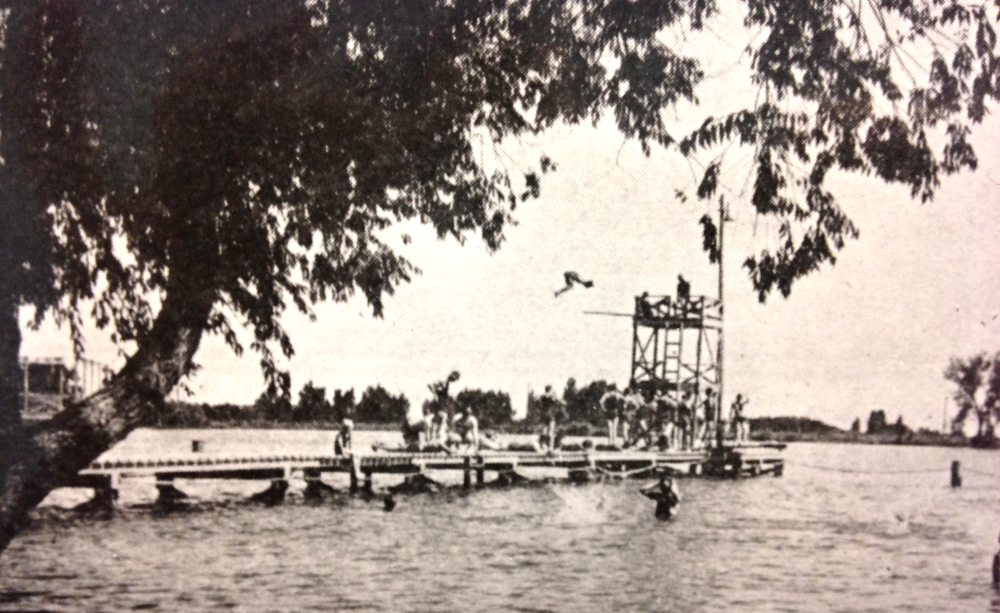 Diver, mid-flip, at the City Park pool. (Photo from the Fort Collins Archive.)

One of the memories the women shared with great fondness was their summers at the City Park pool. You could buy a patch, which moms would sew onto bathing suits, and kids would go hang out at the pool all day in the summer time. The patch granted you entry to the pool.

There was a dock that was a ways out and you had to prove to the life guard that you knew how to swim before you were allowed to go out there. 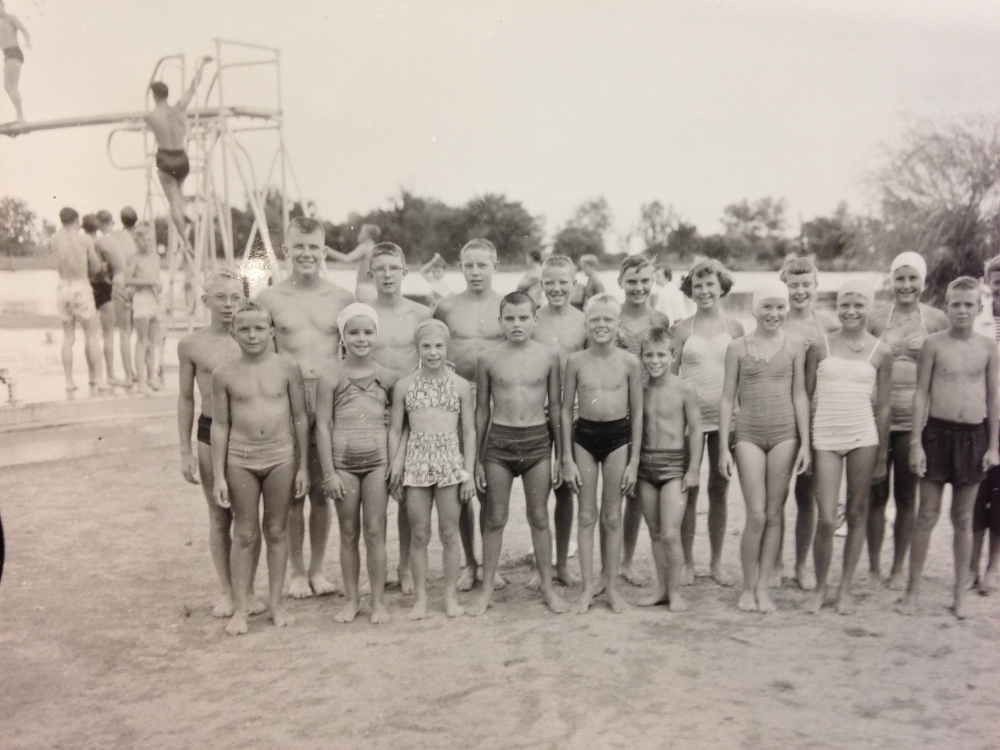 Swimmers at the City Park pool in the early 1950s. Peggy O’Dell and Nancy York are two of the girls in the back row, just right of center. (Photo is from the Fort Collins Archive.)

There was a wading pool at the park for the smaller children. One of the women at the meeting last Friday said that her mother wouldn’t allow her to use the wading pool because of a fear of typhoid. 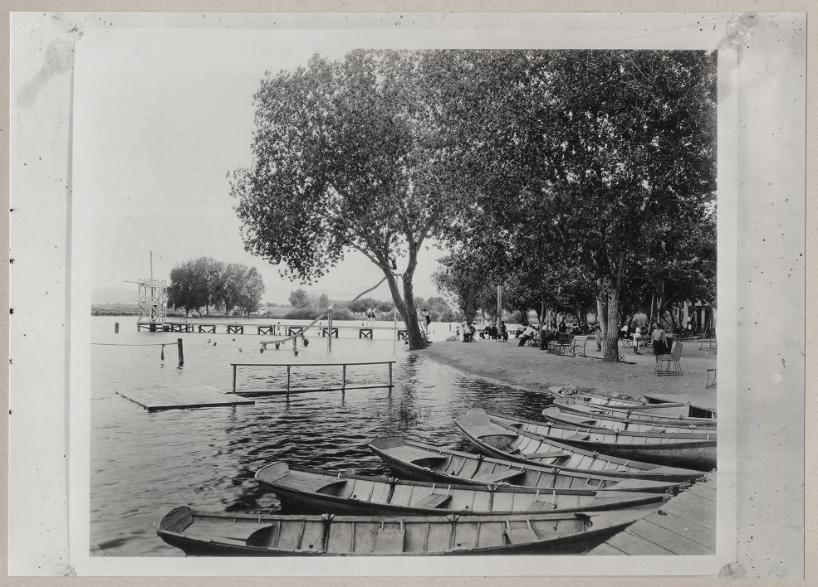 Boats on Sheldon Lake at City Park. (Photo from the CSU Archive.)

Another fond memory that came up during our gathering on Friday was of time spent with family over picnics at the parks (both City Park and Library Park). On weekends, moms would pack a basket and the whole family would head down to the park together. 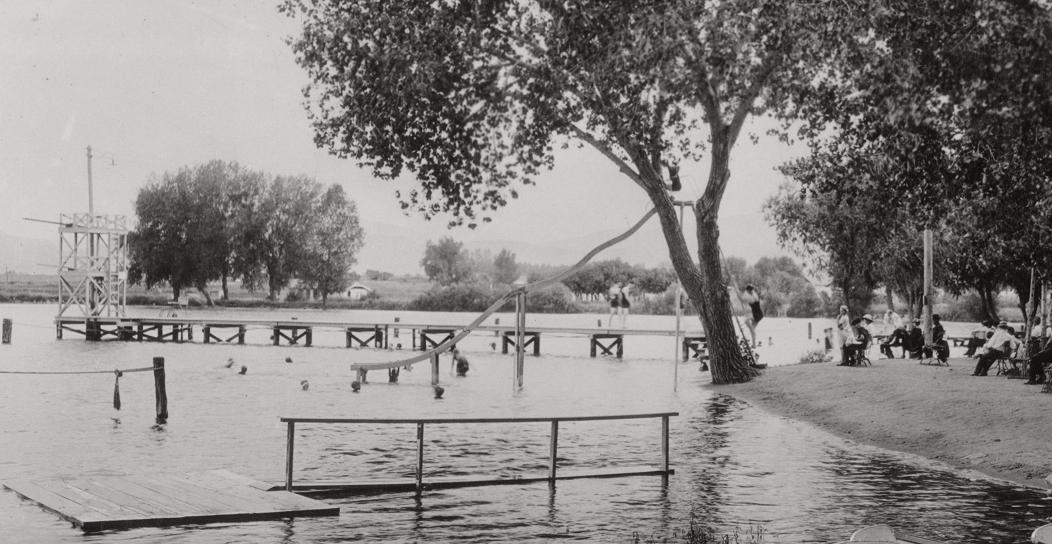 Closeup of the previous photo showing the slide at the pool. (Photo from the CSU Archive.)

Note the lack of buildings along the west side of the lake as seen in the above photo. The neighborhoods around the south and west sides of City Park weren’t built out until the mid-1950s and early 1960s. 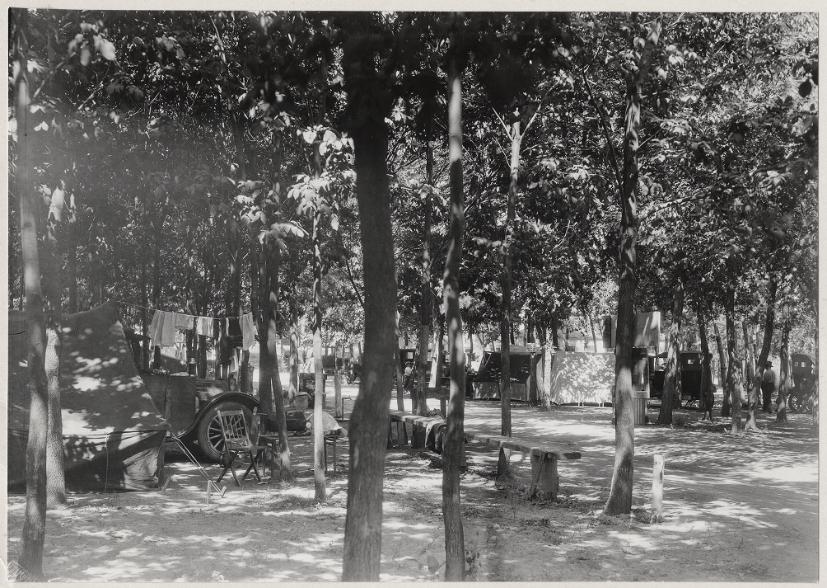 Camp ground at City Park. (From the CSU Archive.)

There was also a camp ground on Oak Street at City Park. One woman at the meeting explained that her family stayed in a cabin until they found a house to move into. The camp cabins were located on the north side of Oak Street, and they’ve been landmarked and are still there today.  Other camp visitors would put up a tent, string a line for their laundry, and enjoy their time outdoors on the fringe of town. 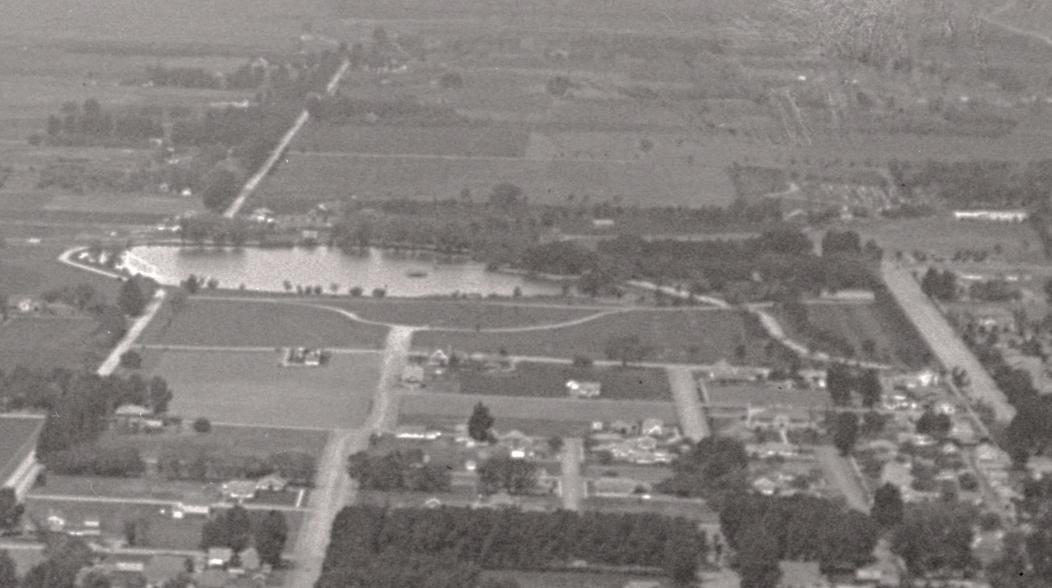 There was a street around the hill that’s no longer there today. (This aerial photo is a close up of one from the CSU Archive that was featured in a Then & Now post awhile back.)

But the memory that really brought a sparkle to the eyes of some of the gals in the room was the mention of the City Park hill. No one really knows how that hill came to be, though there is some speculation that when the lake was dug out, the hill was formed. But it wasn’t covered with grass in the early days of the park. The vegetation was wild — not the manicured look that the hill sports today. And there was a road around the hill (that you can see in the above photo) that no longer exists. Not only did people drive their cars up to the top of the hill to watch fireworks on the Fourth of July, but that’s also where the teens would go to “park” in the evenings.

I heard many more stories last Friday that I look forward to sharing with you all, so stay tuned. And with this nice weather we’re having and with Spring Break almost upon us, I hope you’ll spend a little time out and about, enjoying our local parks.

I met with the women of the Pioneer Women’s Association at their meeting on March 6th, 2015. Joan Day helped me to videotape the meeting so that I could go back later and remember who said what and give them credit here. Unfortunately, only the first half of the meeting was recorded. My camcorder batteries appear to be growing old. (Aren’t we all! Some days I feel like my batteries need a reboot.) So I’ve been unable to list direct sources for this post. But I did capture details about living on College Avenue, the first McDonalds, and the sugar factory, all of which I hope to hit upon in a future piece. Thank you, ladies, for a wonderful lunch and fun time hearing all of your stories. I look forward to hanging out with you again in the future.

I also picked up the detail about patches sewn onto swim suits from the folks on You Know You Grew Up in Fort Collins if you remember… group on Facebook. (A wonderful place to collect memories of folks who grew up in town.)

All of the rest of the photos were from the Fort Collins Archive. They were located in a folder labeled something like “Parks and Recreation” or “Outdoor Recreation” or something like that. (I wrote it down so I could go back and spend time on the other photos in the album…. But now I can’t remember where I put the slip of paper that I wrote the name on. *sigh* It is always something, isn’t it?) There were a lot of fantastic photos in that folder, so I’m sure I’ll be checking it out again soon and I’ll make sure to the get the name right next time.  🙂